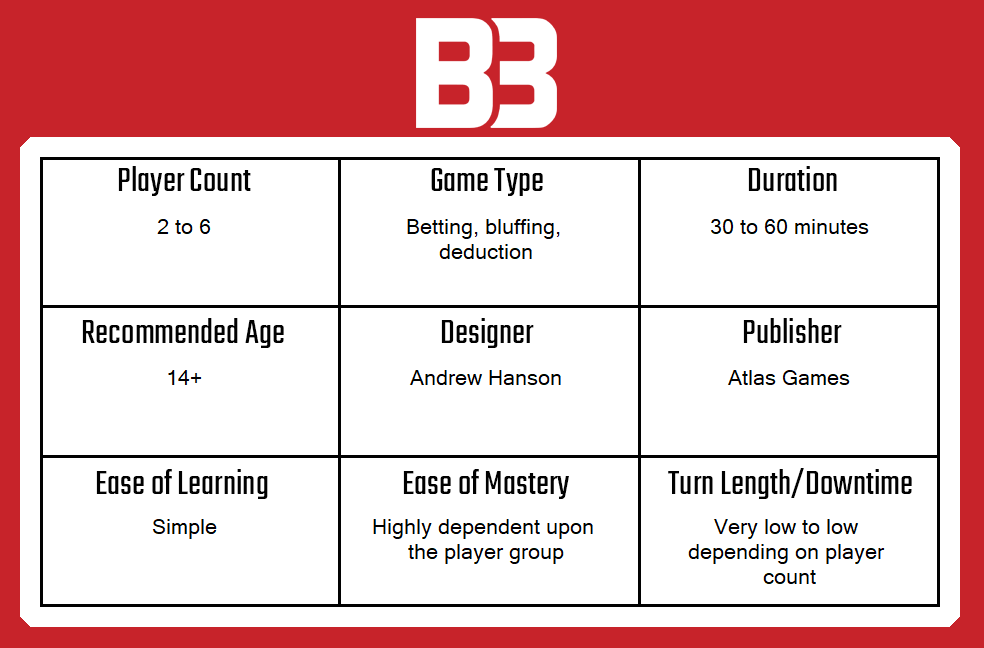 Intrigue and scandal are common at the court and the common folk watch with fascination as fortunes rise and fall. Whether interpreted as a game about wagering ones own influence in order to survive; or as a fly-on-the-wall observation of fame and politics seen through the eyes of an outsider; there is no doubt that Cursed Court is one of the tightest betting, bluffing and deduction games that I’ve ever played. It’s a real beauty as well, with incredible artwork and fantastic production value. 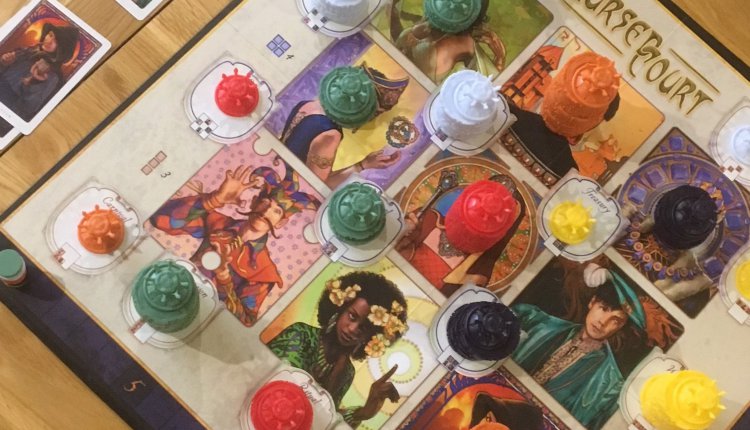 Cursed Court takes place over three rounds of gameplay, each of which represents a single in-game year, although the passage of time has absolutely no bearing on the game mechanics. What each year does do, however, is end with a scoring round that resets all of the pieces and cards in preparation for the next round. During the year, players will take turns to place chips (topped with Crowns) on specific characters or groups (rows or corners, for example) which demonstrates their support for that character or event.

The relevance of that support is determined by a card driven system of both hidden and public information. Every player has access to two face-down cards that sit between them and their neighbours, so two people have visibility of every card at all times, but no one has access to every card. Adding to these secret cards is a public card that is drawn before each round of betting.

At the end of every year, players score their supported locations based on the number and variety of cards among all of those dealt before resetting for the next year. Each player has only twenty chips per year, however, and stacks can be bumped off the board by any bid of twice as many chips. It is possible to bet big right at the start, but if you do, you may risk being bounced off other lucrative spots in later rounds during the same year. Bluffing is also a risky but potentially critical consideration during every decision to bump another player, especially if it will cost you a significant proportion of your stack. 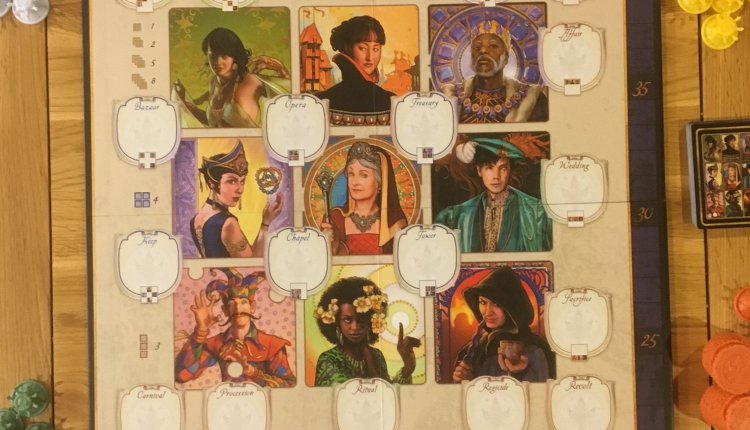 The pieces in Cursed Court are almost flawless and the overall quality level really enhances the overall experience because it feels appropriate for the subject matter. The board is richly detailed with fantastic artwork that depicts people from a wide variety of races, sexes and roles as equals, which is something that I really appreciated. The deck of cards has matching artwork on the face and is produced to a high standard, whilst the instruction booklet does a perfectly decent job of introducing the game and a number of alternative variants.

Of course, the real stars of the show are the six different stacks of chips and the crowns that sit atop them on the board. The crowns are larger, harder and more pointy than I imagined (don’t step on one) whilst the chips are very chunky and nicely weighted. I dare say that the only downside with the chips is the fact that they don’t stack, so larger piles tend to fall over in a noisy cascade that can often send other pieces tumbling off the table. Someone will always fiddle with them as well, which means you’ll probably want to kill them long before the game ends. 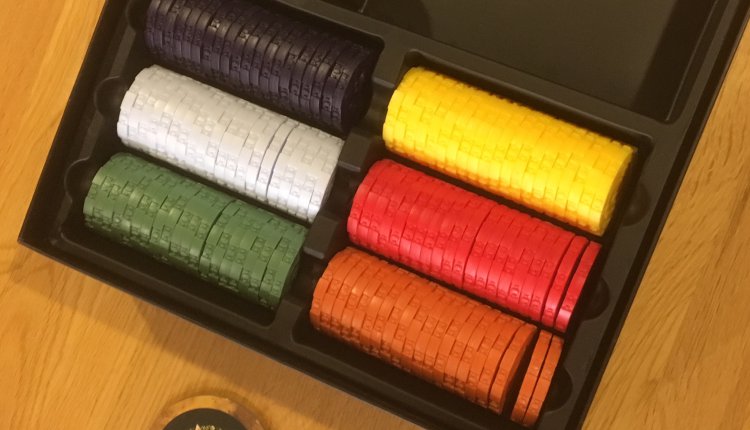 A turn in Cursed Court is more or less as simple as it gets. Play initially passes around the table, but before any round of betting can end, all players must have the same number of crowns on the board, so by the fourth round of betting in a four, five or six player game, it is likely that one or two players will have to catch up due to being bounced off of their chosen locations. The only way to avoid this for certain is to place more than half of the starting stack of twenty chips (eleven) which will lock it out for the rest of the year because it can’t be doubled.

One thing to get your head around in Cursed Court is that the value of the chips is irrelevant for scoring purposes – stacks are simply used to show control of the space they sit on. Scoring relates to exactly how many cards of a specific person are among the cards that have been dealt or in the case of an event like The Wedding, all characters in a row. For example, two cards showing any character will be worth two points to the player who has their crown on that character during the scoring phase, whilst three cards would score five.

Because two players can see every hidden card and all players can see the open ones, there’s always competition for characters that are likely to score five points (or eight, if the elusive four of a kind is found.) Some players may have easy sight of the row, column or corner sets as well and whilst these locations score a reliable but unexciting three or four points, they are often less competitive and therefore, can be a sensible choice. In any event, turns are simply a matter of placing a stack of chips (which may or may not bounce an opposing stack) and then placing a crown on top – it’s that simple! 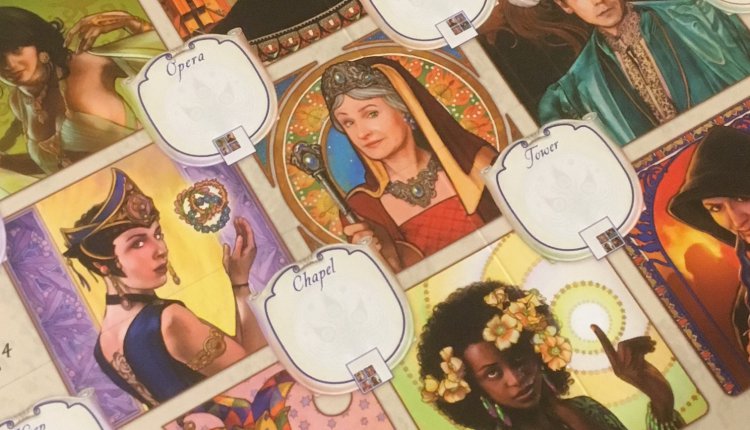 Or is it, really? Well, not really, because there’s a lot to think about in Cursed Court. The decision making process becomes increasingly more complex with every round and then again as the years pass and the leaderboard takes shape. This is all compounded in different ways by the player count. Large games force smaller, more hectic bidding, bluffing and outbidding, whilst smaller ones arguably cause the most consternation about which opposition bets are legitimate.

There’s never any mechanical complexity to handle in Cursed Court. This isn’t like a game of Lisboa, where there are fifty potential actions, many of which are nested inside others. Even so, whilst all a player can do is place a bet, there is much less left to chance than one might think. As betting continues and premium (whether public or preferred based on cards you can see) scoring opportunities reduce, there can be a bit of a pause to determine what’s next. This can lead to stone cold bets or manufactured bluffs, which can be a little unsatisfying, or on the contrary, you may be the only player to spot an unguarded opportunity to score on a location space that no one has spotted.

Personally, I have always found betting and bluffing games to be a bit dull and lacking in replay value as well as depth. Cursed Court undoes basically all of my usual reservations without introducing other mechanics to underpin the actual betting. Because it uses the chip stacks as an area control mechanism that is reset each year, rather than as a scoring measure, the game never moves beyond the lower placed players, which is a very important factor in ensuring a nail-biting finish.

I foresee Cursed Court remaining right at the top of my pile when introducing casual gamers to something that is both serious and at the same time accessible, or whenever I want to begin or end an evening with a really tight, competitive game that is quick to play and very likely to remain highly engaging for all players. If you’re looking for a wager or bluffing game right now, then based on both production and mechanical quality, I don’t think you can do better than Cursed Court; it is fantastic.

You can find out more information about Cursed Court on the website of publisher Atlas Games.