With its power-punk rock duo setup, No Straight Roads comes out of left field with an amazing blend of action, music, and platforming to create a stunning game that will keep your toes tapping along to the violence of bashing robots to the beat.

Mayday and Zuke, the rocking indie duo that makes up the band Bunk Bed Junction, set out to liberate their home, Vinyl City. Vinyl City’s oppressor of the freedom of music and other fine liberties is no other than NSR (No Straight Roads) themselves. NSR serves as an EDM-exclusive record label and ultimately a musical empire that uses music as energy to fuel the city, and after Bunk Bed Junction’s failed — and unfair — audition to become part of the NSR label, NSR bans all rock and roll from further auditions, forcing Mayday and Zuke to take to the streets to put an end to NSR’s monopoly once and for all.

Controlling Zuke and Mayday’s conquest is simple, thanks to the tight controls and fun to use attacks. Mayday uses her guitar to bash the bolts out of any opposition in her way, while Zuke drums up some vicious attacks with his drumsticks. Each attack follows the rhythm of the song, and while that’s taken care of automatically, it’s more important to listen for the rhythm if you want to avoid taking damage from enemies. Each enemy has a ‘tell’ and will show right before it attacks on the beat, giving you time to dodge away or attack before it gets the chance to. It’s a clever system that is familiar to those who play action platformers often, but having it match the music adds so much more.

Each level — except the first one — consists of a multitude of areas that you have to clear to move on to the next, which ultimately leads you to the boss fight. Each boss represents one of the artists in NSR’s lineup and has a distinct type of EDM genre that it follows. The first boss, DJ Subatomic Supernova, represents ‘Deep Disco’ and the style of the arena you fight him in matches the music perfectly. The game does a good job of making each boss fight feel epic, which is good because No Straight Roads ultimately is a boss-run game. 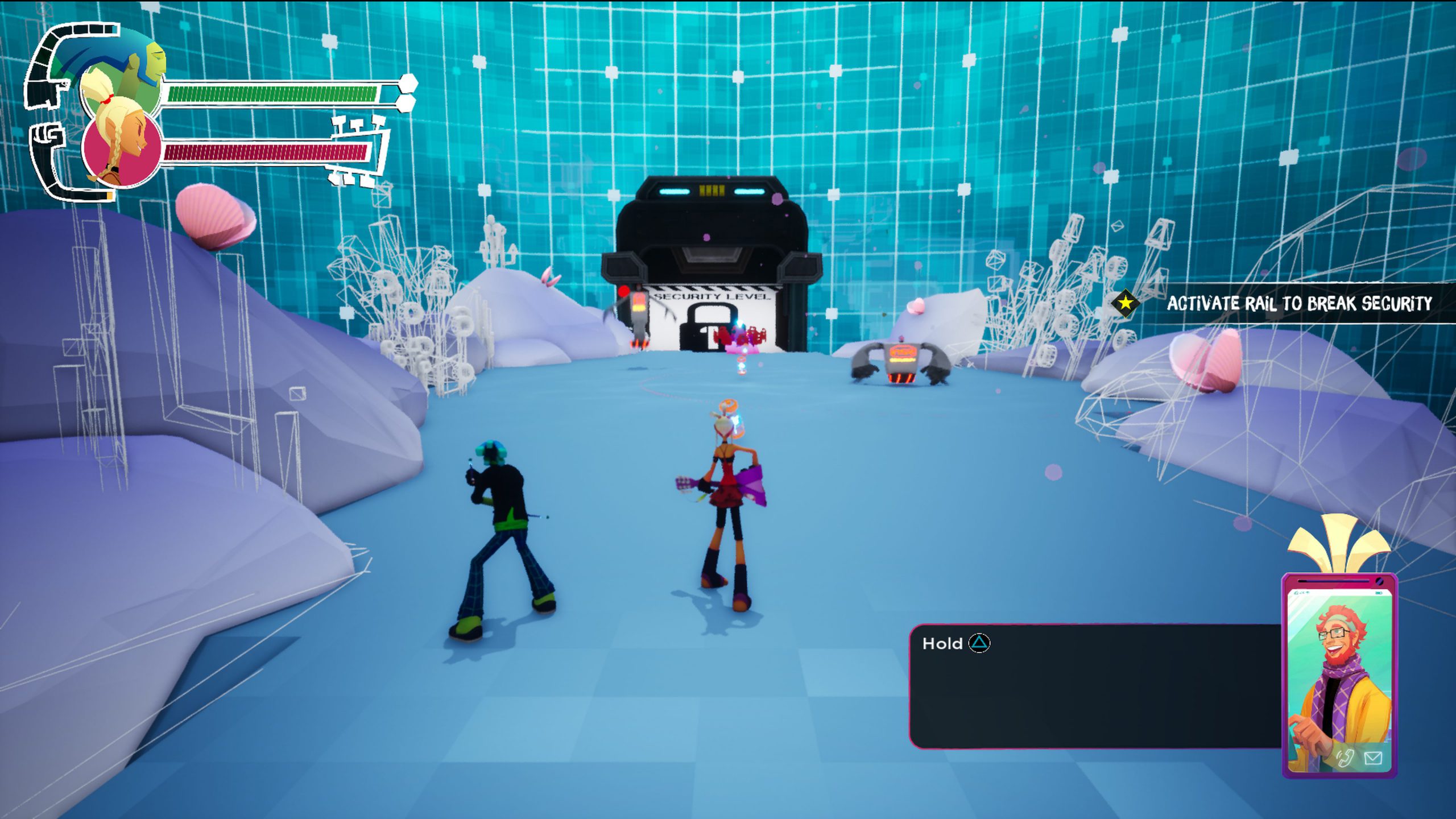 The design of No Straight Roads is very reminiscent of Jet Set Radio, and it proudly wears that neon-punk inspiration on its sleeve. Each part of Vinyl City is filled with glowing advertisements and shiny signs on top of pop-culture stores. I love the use of color to showcase the excitement of a big city, with all the lights and pomp that follows.

While I can’t wait to wrap up Bunk Bed Junction’s epic rock-fueled adventure, there’s a lot to love here. The music is easily the best soundtrack I’ve heard in quite some time, and the fact that the action works in perfect sync with it makes it feel so good to play. Mayday’s punk-attitude dialogue is hilarious and the overall story is corny but engaging. The whole package feels like a new genre of game, but there’s definitely some tribute paid to their inspirations, all while still feeling fresh just the same. 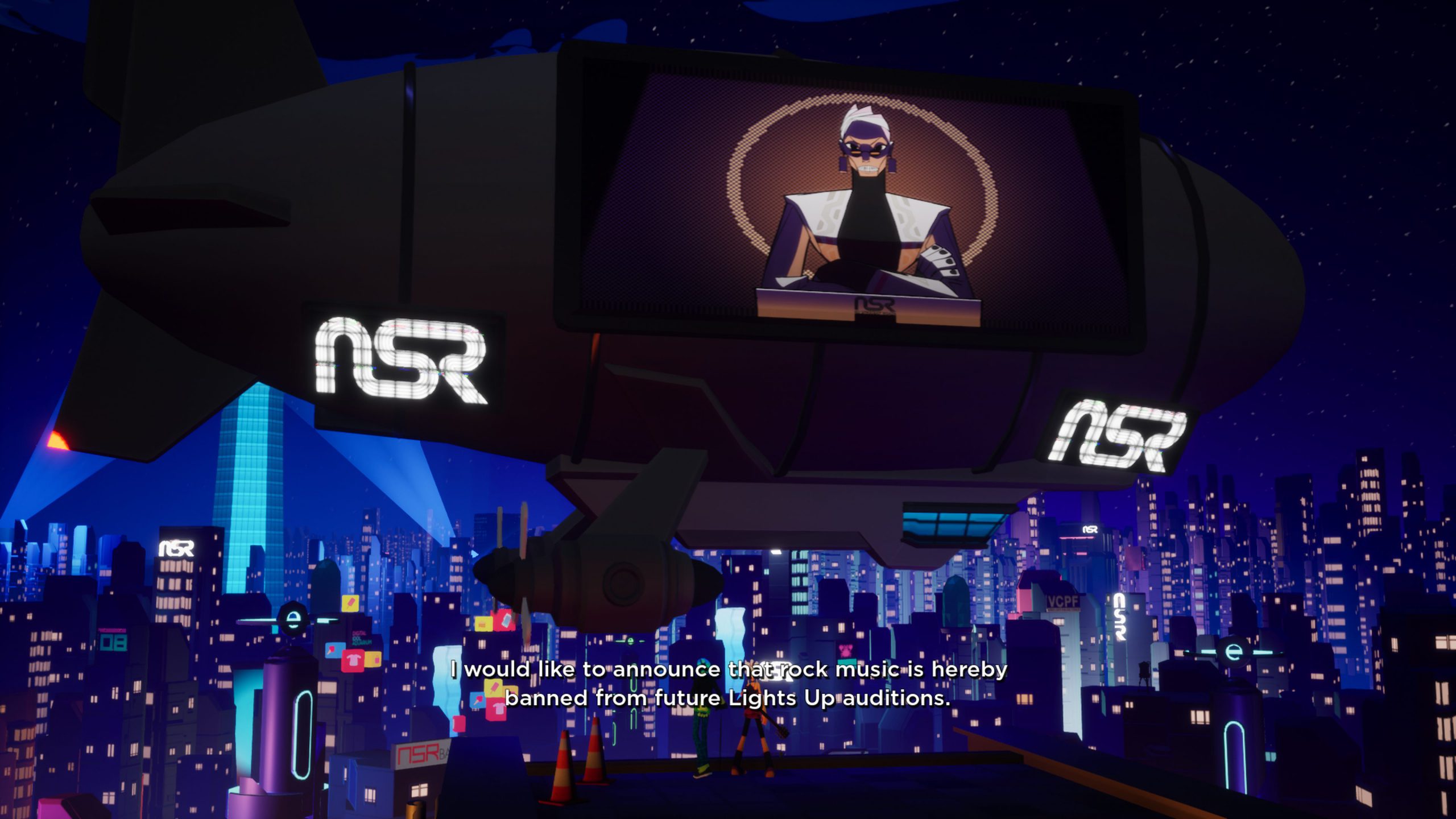 Be sure to check out No Straight Roads when it comes out simultaneously on the Epic Games Store (Windows), Nintendo Switch, Playstation 4, and Xbox One on August 25th!