As (just about) the main tabletop reviewer here, my attention is often more on paper and card than it is on digital games. When a video game chooses to root itself firmly in board game mechanics however, my interest is always piqued. Faeria is very much a board game, but it uses its digital presentation to push the boundaries over and above what would be likely be manageable on a real table.

And let me tell you this straight — it does a superb job of it. Faeria is predominantly a collectable card game (or CCG) that unusually for the genre, takes place on a board — which is the only reason why I am calling it a board game and not a CCG.

If anyone remembers the long-defunct MTG: Duels of the Planeswalkers series, then there are certainly similarities in the way Faeria  is presented and even between the core gameplay and that of Magic: The Gathering, but the presence of a board and how it is used here makes a world of difference.

The basic approach to a normal match is very simple, as is the objective — simply reduce your opponent’s life from the starting value (usually 20) to zero. You’ll do this, much as you do in most CCG’s, by playing cards from your hand that all come from a custom deck of 40 cards in total. The usual starting hand here is just three, and you can choose to redraw any number of these cards before each match begins. 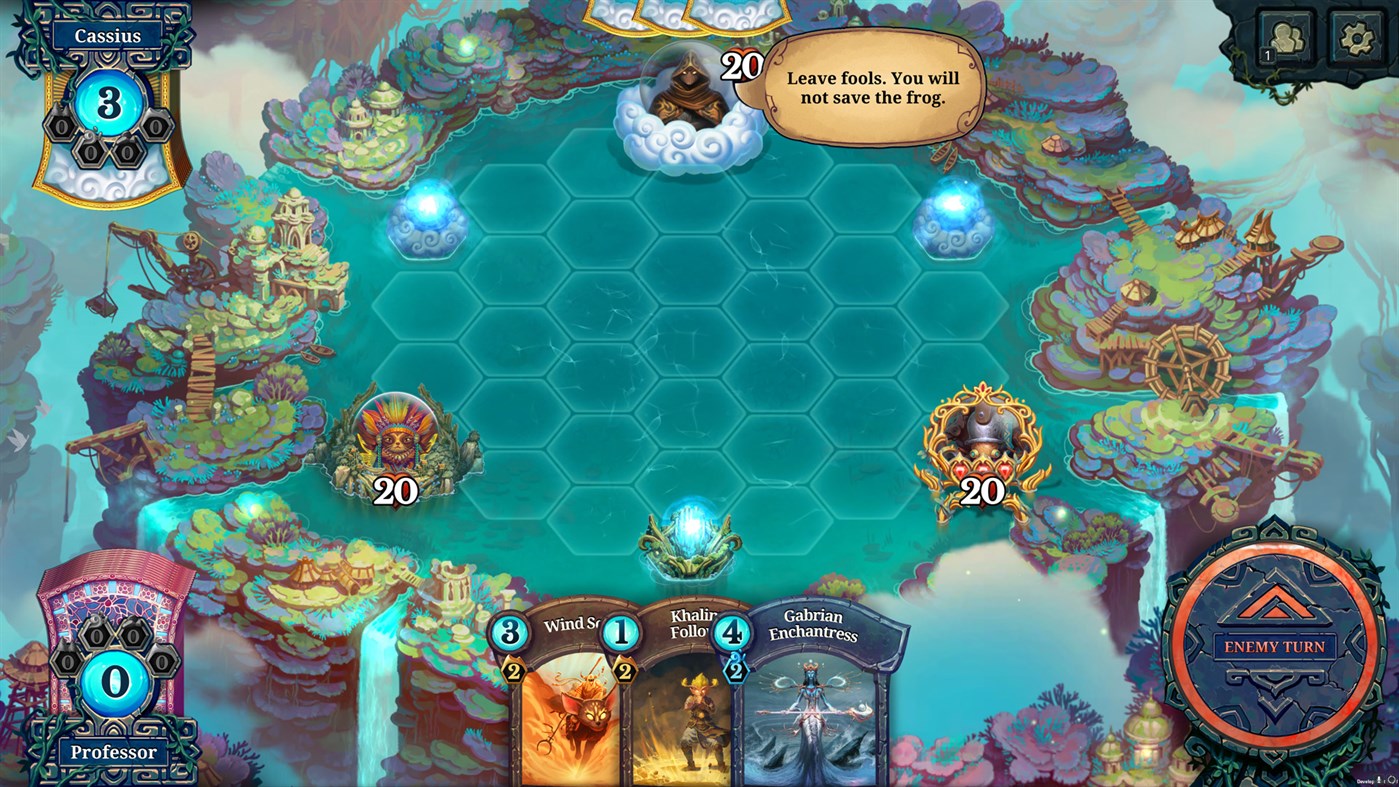 The main in game resource — the titular Faeria — is set to three at the beginning of the game, and each card you play has a cost of between zero and maybe six or seven Faeria to play. In some rare cases, cards can reach eight or nine Faeria, but these are quite rare. Interestingly, unlike in MTG where such a card could almost never be played, it’s much more likely that you will get such a card onto the table in Faeria, but it will probably be in the mid to late game.

Now, it’s about time I mentioned that board, as it changes the game quite dramatically. In Faeria, you don’t play cards onto some kind of imaginary battlefield where each player has a “side” as such, you actually craft the board as you play. Yes, one player is at the top and the other the bottom, but in between them will be a sea of empty spaces, with Faeria fountains in each of the other four corners of the hexagon. 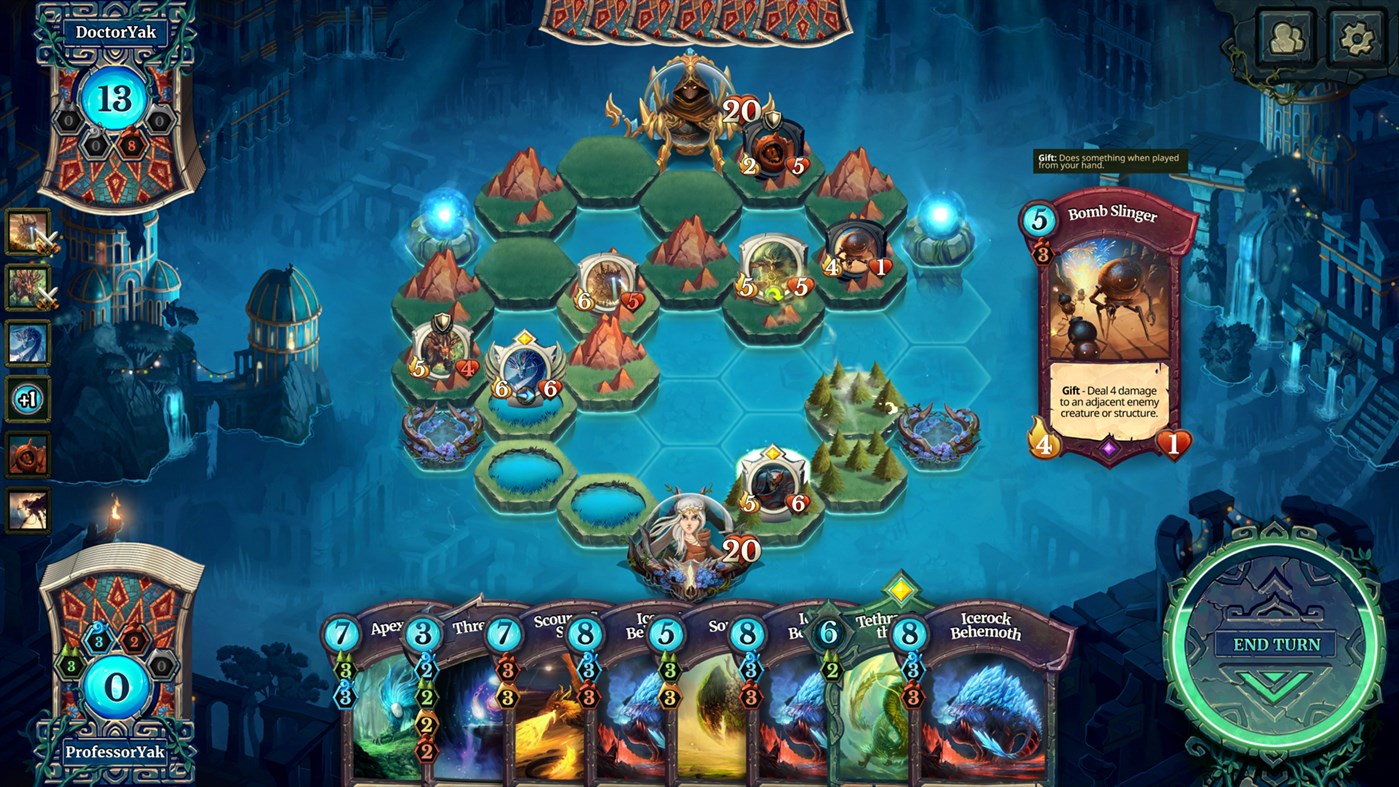 In addition to spending Faeria to play cards on their turn, the player will also need to place either two “plain” tiles, or one of any of the “featured” tiles — such as mountains, lake, forest or desert for example. When the player plays their card(s), they will only be able to place their creatures onto spaces that were added by them – giving the game a spatial and strategic element that is absent in most games.

You might be wondering why there are special kinds of space (or you may already have guessed) and that is a really clever feature in my opinion. Simply put, some creatures require a set number of a specific kind of space to have been placed – for example three forests — before they can be used. These creatures can only be played onto the spaces that match their preferred terrain, so there’s a secondary consideration about where to throw down your special tiles. 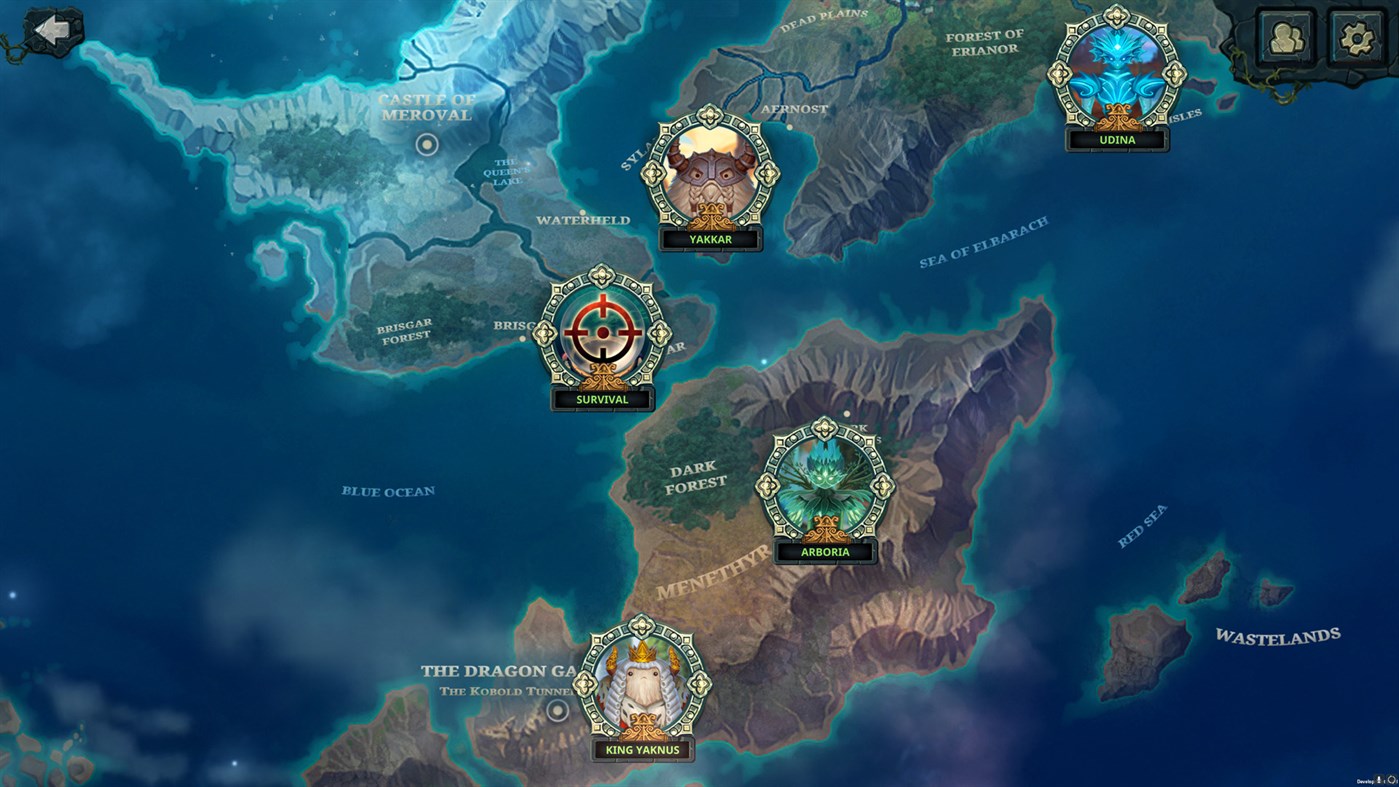 These basic mechanics are so clever, so simple and so fun, that Faeria is already off to a great start, and that’s before you consider everything else it packs into the experience. I mentioned earlier this Faeria would be a challenge if it were a physical board game, and that’s simply because some of the design decisions suit rapid, automated processing.

For example, there are quite a lot of card abilities that affect a creature on your team “at random” or add X number of a specific kind of terrain tile at random. These are all things that would be a nightmare to process and determine in a real life setting, but here – it’s as slick as anything, and helps a number of powerful feeling abilities not become overpowered, which they might be had the designers took the easy option to allow the player to choose those outcomes, instead of having them randomised. 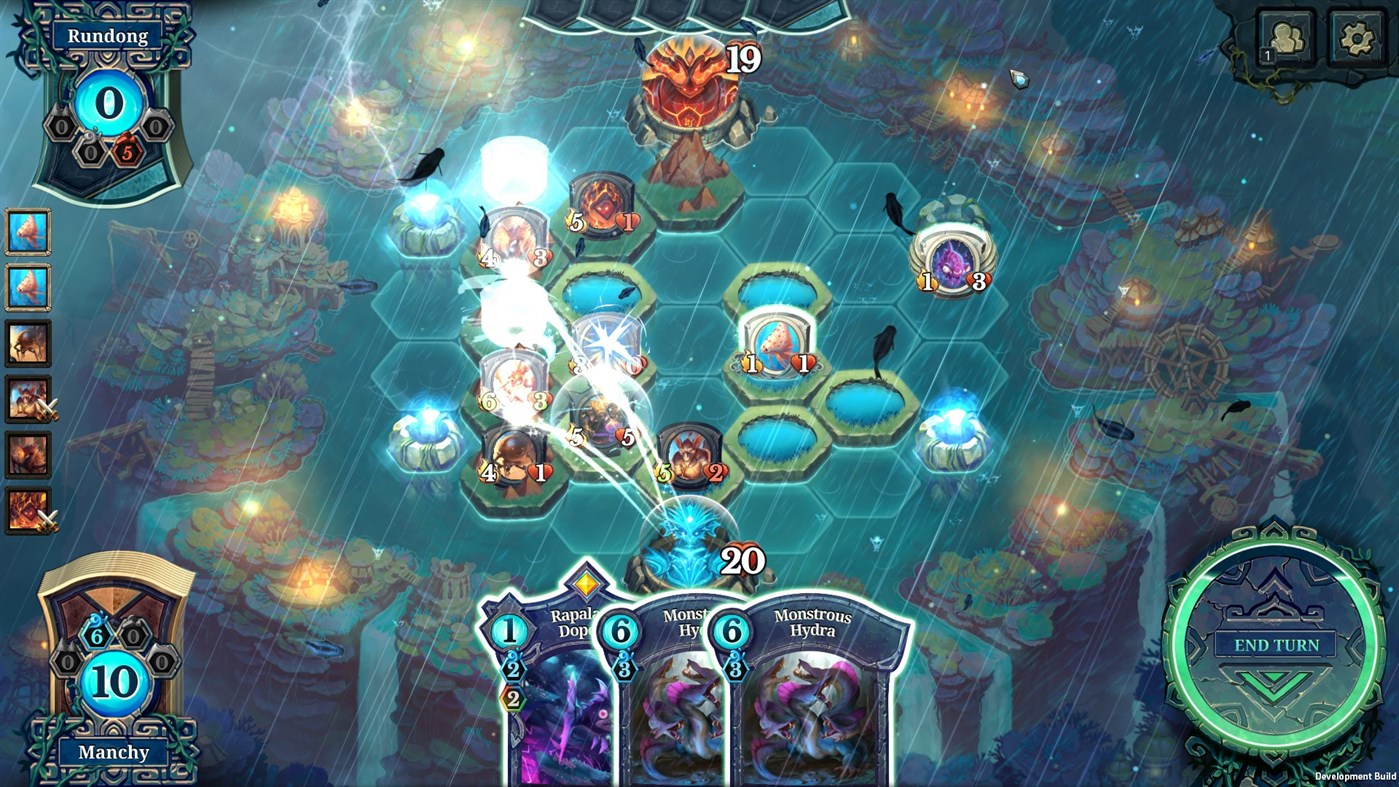 Outside the actual gameplay, there’s a lot in Faeria to get excited about. First of all, the blurb surrounding the game suggests that players can unlock all 300 or so of the in-game cards within 50 hours and without any pay wall, which is a feat I’ve not yet achieved. There’s lots of stuff you can buy (with real money) to enhance your experience, but that appears to be largely limited to a dizzying array of cosmetics — and the game seems to offer some payback by having online tournaments in which players can win fairly large real-life prizes.

Whilst I haven’t spent the full fifty hours on Faeria yet, I have seen enough of it to work my way through about five or six separate “mission packs” each of which contains up to ten individual matches and/or puzzles (where you have a single turn to work out how to win). After each of these matches (but in particular when you complete a pack) you’ll be granted one or more cards, and in some cases, you’ll receive a recipe for a basic deck of a specific colour or archetype to help learn the ropes of deckbuilding. 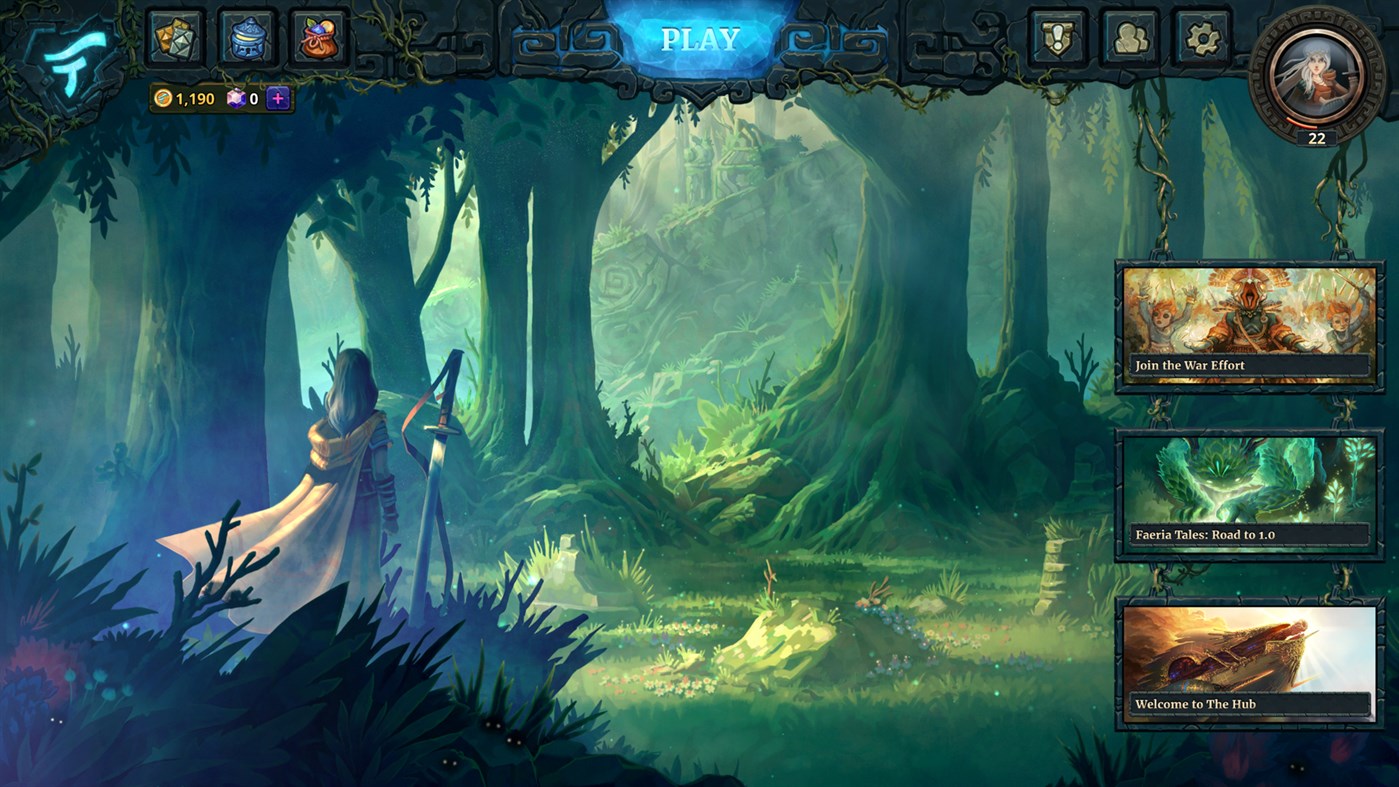 If you add what appears to be tens of hours of single player content to the online multiplayer (including crossplay with PC and possibly other consoles) and modes like draft, things really open up. Faeria appears to have achieved what Duels of the Planeswalkers could not, by offering both an entry level experience for new players and a near infinite end game for those who stick around.

It takes quite a lot to launch a new CCG these days when you consider the staunch and longstanding support that MTG has, or the adoration that Hearthstone has gathered, yet Faeria offers something that is both unique and familiar. And dare I say it, with MTG really showing its age these days (and Hearthstone being a bit dull), Faeria is probably just the better game out of the three. Whilst I can hardly believe I’m saying it, I’ve fallen in love with this little game — and I’ll see it well beyond the 50-hour mark at this rate.

Faeria is available on Nintendo Switch, Xbox One, Android and PC.