When stumbling through Kickstarter, I found Neko Neko Cafe and saw two things I really love; cats and food. Excited at a board game with these two themes, I backed the game and then played it as soon as it arrived. This game has some amazing design and so many super cute kitties, however, I found the game itself to be quite confusing and I am still not sure if I actually played the game correctly.

Neko Neko Cafe is perfect for three to six players, but the box also says you can play with one to eight players. The play time is also all over the place, stating it can take five minutes up to 120 minutes. The game is recommended for ages three and above, however, I played with a group of adults. 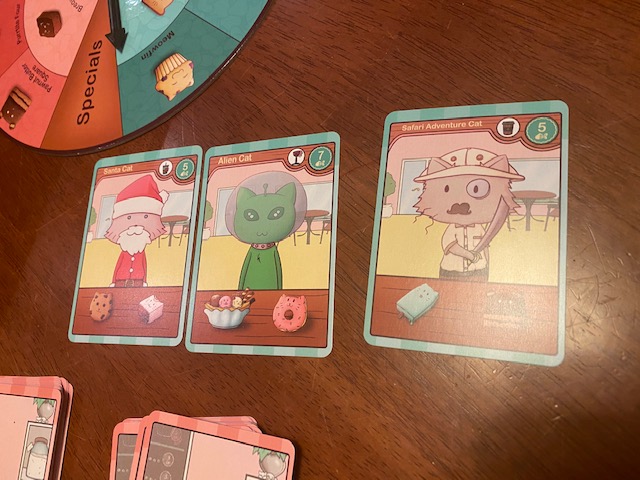 Set up is pretty simple, the game comes with a spinner which is set in the middle of the table, along with food cards that are put within reach of everyone. The food cards need to be placed face up. Each player gets their own Chef card, featuring an adorable chef cat, and they get a frequent customer card, which I will explain later.

The spinner has an inner and outer circle, along with a Special area and a Catastrophes area. Our spinner was actually quite warped when it arrived, so it leaned towards one side of the spinner, this meant that it often gave players the same items no matter how many times they spun it. Players get one of each food within the inner circle, then, the rules state you can select two more foods of your choice. We took this to mean also from the inner circle, though it’s not clear. 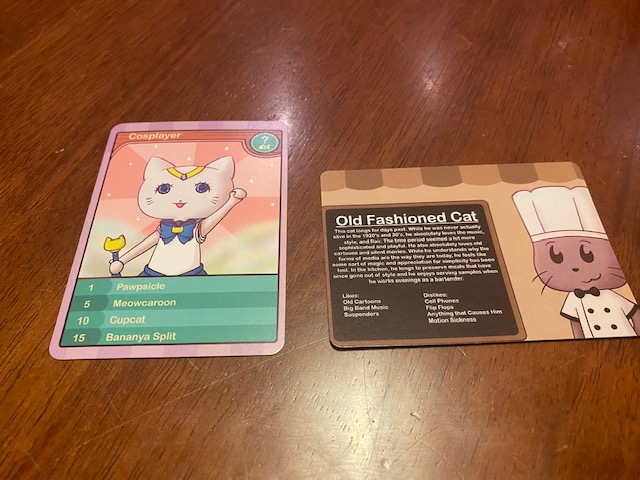 From there, you must place three customer cards on the counter. The booklet does not state what the counter is, but after playing we seem to all agree it might have been a decorative bit of card that we had thought divided the inside of the box. If only there were pictures. The end of the game is full of options, as the book provides four different ways to win, depending on how long you want to play, I suppose. 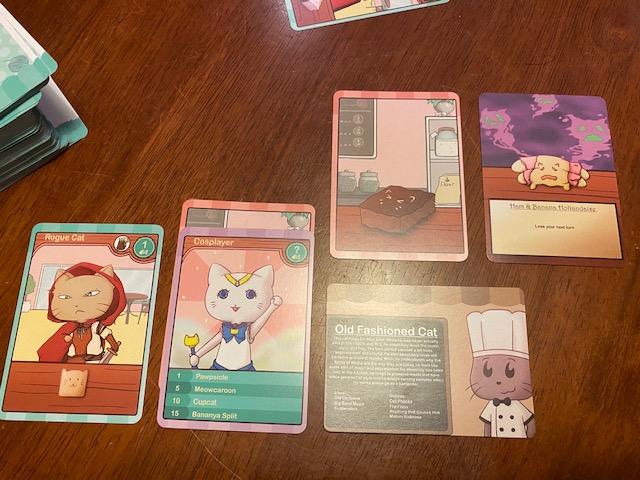 Once you have decided what your actions are, you can serve and collect any of the customers available at the counter, then restock the counter with new customers before the next player’s turn begins. You can also serve your frequent customer, who has a large order that you need to do in the number that is deployed, starting with the lowest score and working up, to gain major points at the end of the game. Restocking at the end of your move, means that there are always a lot of people at the counter.

When playing the game, we found that often the same cats stayed at the counter, not allowing people to serve them unless you got really lucky with your spin, which isn’t really possible with a spinner that leans towards one side. We found that the game would go on and on and on without ever feeding a customer. This felt wrong in the way that we were playing, so we ended up reading the rules again, which also state that there might be more than three customers at the table, but didn’t explain how that happens. At the end of each round, we tried adding three more customers, but we still continued to be unable to feed the customers and they just stacked up.

When spinning and landing on a special or catastrophe, you will end up with a dessert with either a special effect (which can help you) or a bad effect (which can really kill the game, to be honest, as it feels so wrong to completely skip people’s turn when we can rarely feed anyone anyway). 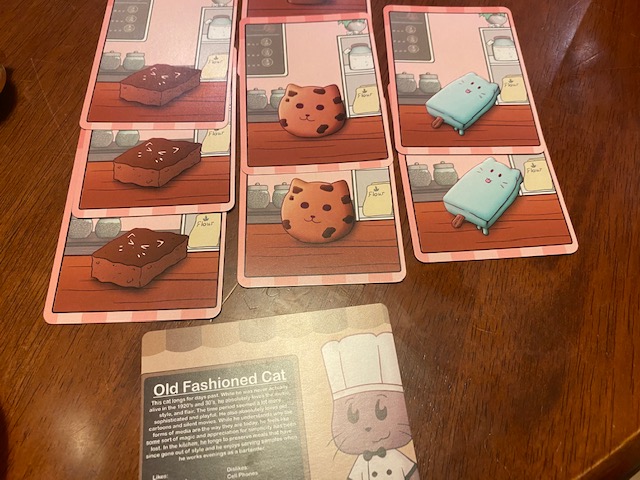 Neko Neko Cafe became a hectic and confusing game, with everyone trying to feed someone but nobody was able to really feed anyone on their turn. It ended up being frustrating — and whether that’s from the rules not making a lot of sense or from the fact that the spinner didn’t work well, we will never know. One thing is for sure, these cards are so lovely and I am happy to have them in my collection, however, I still am not sure if this game is one really worth playing or if there is something our collective group all missed.

You can find Neko Neko Cafe on Kickstarter.