SMG Studio has dropped a new DLC for Moving Out, Movers in Paradise, alongside the free Moving In update, and it’s fantastic.

Moving Out has been a staple in my household since it first released last year. Even though we are living in a couch multiplayer renaissance it really stands out alongside most of its competition due to its accessibility, quick pick-up-and-play style and wealth of content. I mean, it launched with 50 levels — that’s a lot, especially when some multiplayer games simply launch with deathmatch and a few mutators. It’s also pure co-op, which chalks up a few more marks.

Earlier this year the developers announced that they were releasing a new update for the game, titled Moving In, which would flip a few of the levels on their head by having players work together to drag/toss/dump items from the moving vehicle back into the level. However, what wasn’t announced back in January is that they had also been working on a 24 level strong (technically 14 are standard, 10 are additions to the Arcade selection) DLC which would launch at the same time. That’s Movers in Paradise; a fun, island-hopping expansion which — frankly — they could have probably released as a standalone game.

While the original release of the game challenged you, and your buddies/family if applicable, to quickly clear out the valuables of a variety of residential or commercial (and later, other) properties, Movers in Paradise takes those same mechanics but loses the relocation reason. Instead, you’re investigating the secrets which surround the resort destination that your boss has headed to for their Summer break. 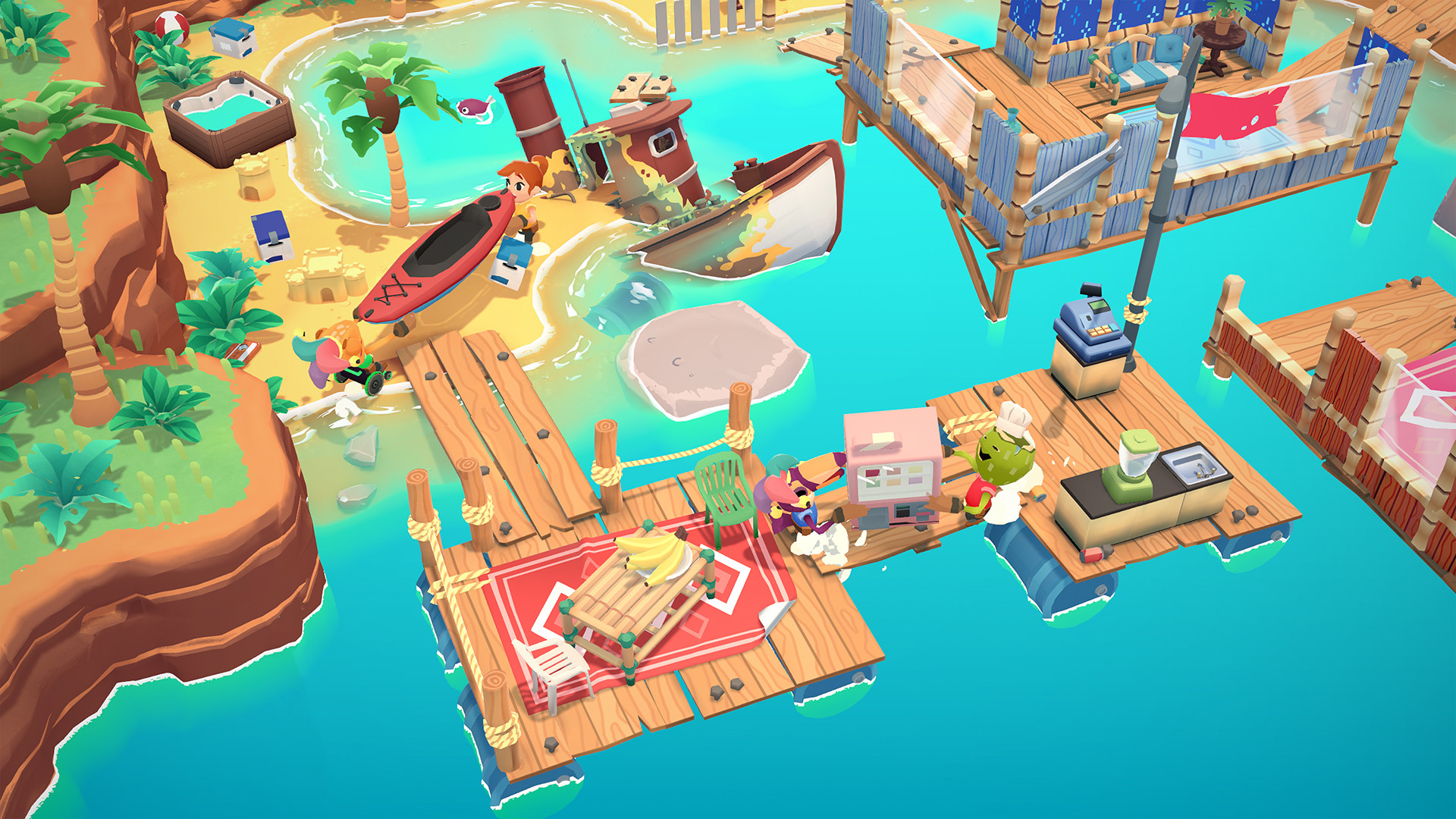 With the 12 levels come a variety of new mechanics, introduced thicker and faster than in the original title. Moving Out threw flame throwers, flustered chickens and conveyor belts at the players, but Movers in Paradise throws its own thematic obstacles; hoarding crabs, ancient traps and curious vines which will try to grab and squeeze the objects you’re pulling past them.

Moving Out was always fun because there was never really a perfect way to clear each location, but there was always a degree of strategy that could be achieved with good communication and understanding of the level layout. Movers in Paradise builds on this by having obstacles that affect the environments more than in the core game. Monkeys fling obstacles at you which can break walls, giant fans can knock gems free which alter the level layout, and a massive rock can be pulled to lower the water level of one particularly memorable level. 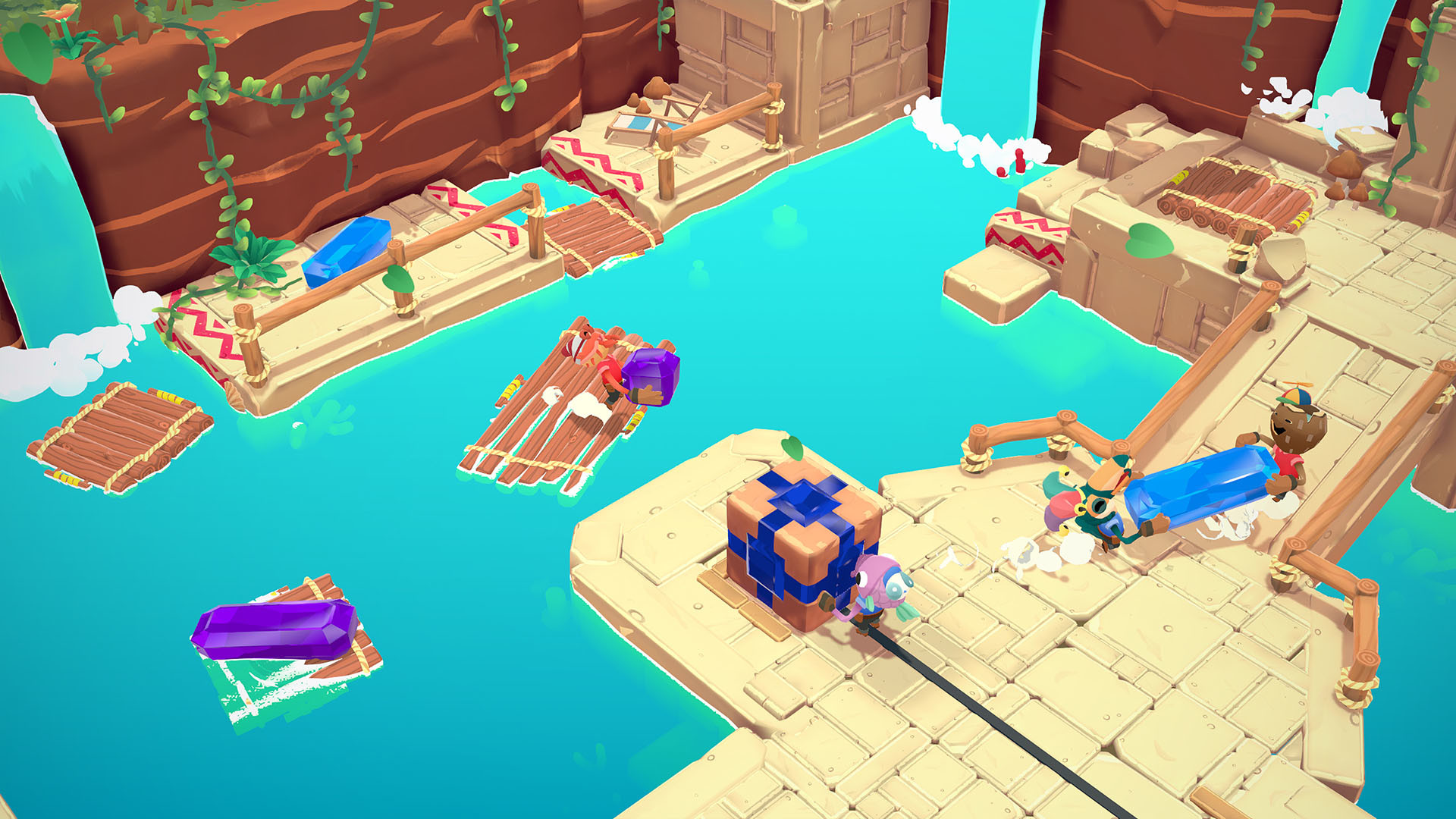 This does mean that sometimes you do have to surrender an attempt at a level rather than simply trying to blast through the level for a gold or silver medal — there’s definitely a greater requirement for replays here than in the original.

That this great little content pack (only £5.99 too, just over a quarter of the main game’s price) launched alongside the free ‘Moving In’ update, which itself contains a further 12 levels, makes it a complete steal. Moving Out is guaranteed to remain in the circuit at my house for a long time yet.

Moving Out: Movers in Paradise is available now on PC, Nintendo Switch, Xbox One and PS4.