Merchants of Infinity – To infinity and beyond!

Merchants of Infinity invites you to trade commodities to appease your spacefaring customers. Commodities such as the entire Pot Noodle collection.

Being a successful board game on Kickstarter these days often requires you to have a game ready to go before even attempting to break into the crowdfunding website. Gone are the days of simply having a great idea being all that’s required to get your project off the ground. And whilst some may decry this, others embrace it and create something excellent to show off before asking for a penny. Merchants of Infinity, created by Andrew Prowse and Rogue Artist Creations, is certainly one of these, with a very enjoyable and well-balanced game even in this playtesting stage.

You play as a merchant aboard Mandelbrot Station, sending your traders out to collect commodities which you can then use to fulfil orders for various customers with the ultimate goal of earning more platinum than your opponents by the end of a number of rounds. Orders requiring more commodities are worth more platinum but are trickier to complete, whilst easy orders will earn you less. You’ll pick up new orders, engage in auctions, and maybe even mess with space-time itself. 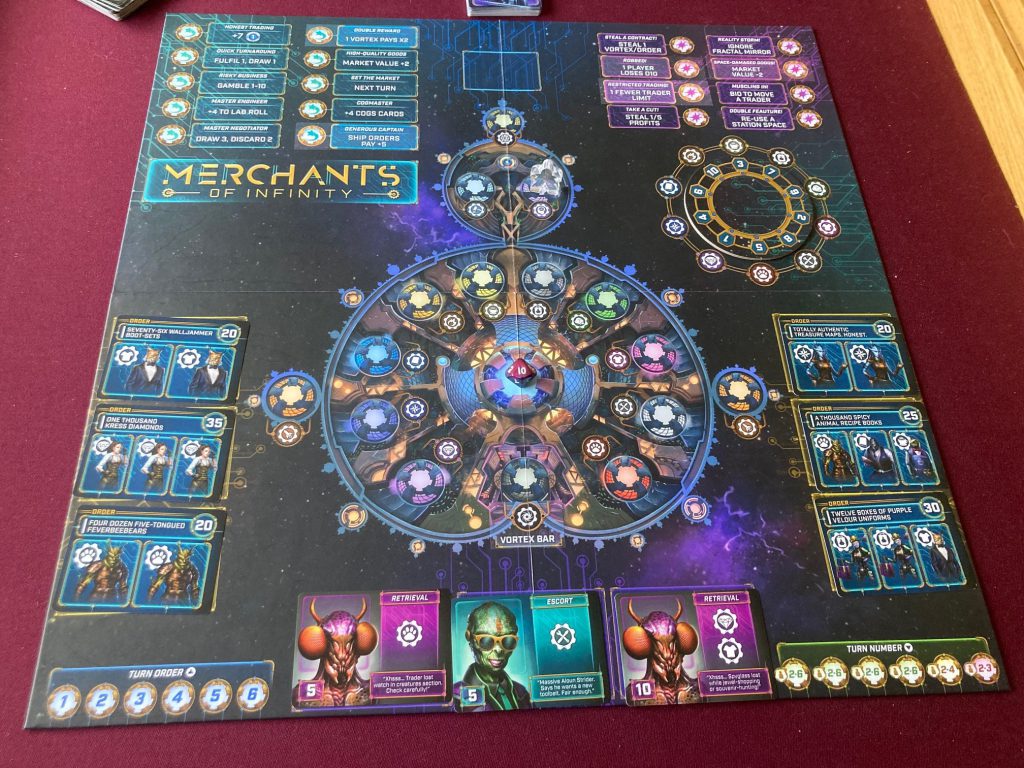 Before all this though, players engage in a little mini-game using Cog Cards. Beginning the game with five cards, you can play as many as you want at the start of a round. By revealing them one at a time you’ll earn points, with the player with the most points playing their traders first during the main game. Some of the cards will allow you to mess with other players’ scores, giving the potential to utterly scupper someone’s plans with a well put together selection of cards. You’ll need to be careful here though, as you only get one new Cog Card per round, meaning you could be running low by the end of the game if you’re too aggressive early. You could always spend platinum to get some extra cards at the start of a round, but that platinum is also used for your points at the end of the game, so you’ll want to balance your play in this phase carefully.Once the play order is decided, players take it in turns to place one of their workers on a space on the board. You can place them on commodities with the aim of fulfilling some of the Ship Order and Vortex cards in your hand during scoring, spaceports or the bar to add more orders to your hand, and an array of other spaces that will give you benefits such as a quick influx of cash, an additional trader until someone steals them from you, or the ability to steal an opponent’s profits. There are always far more things you want to do than you can get done with your few traders, especially with a limit of three traders per space, so player order and trader placement are essential, especially when there’s a higher player count. 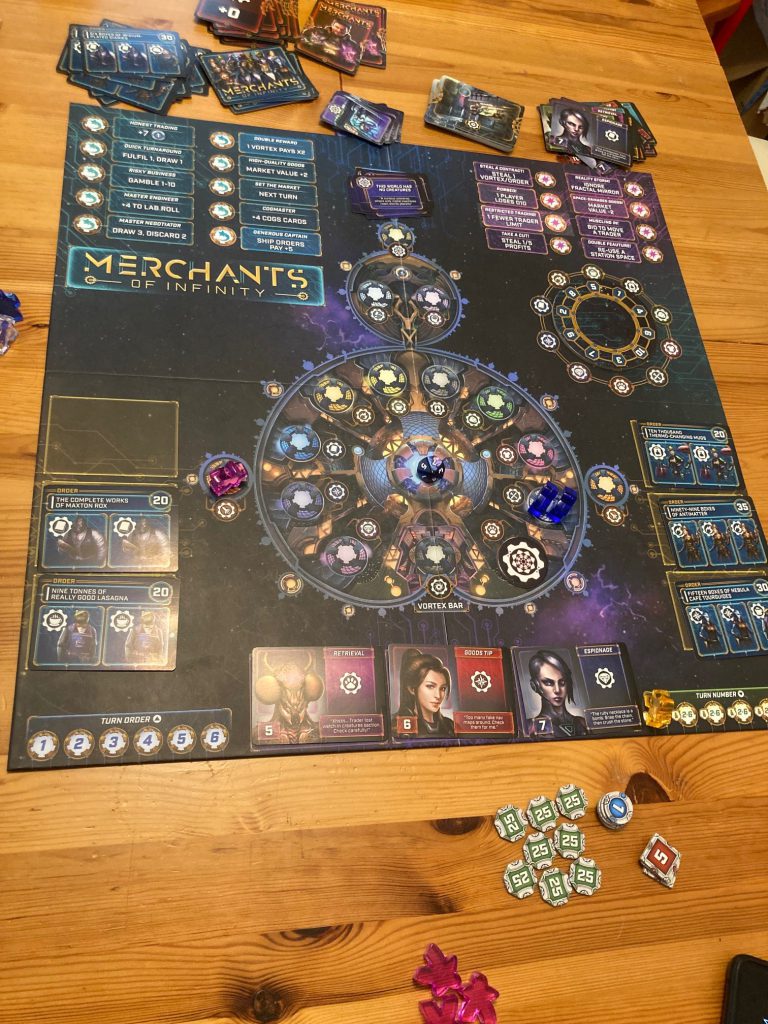 You can fulfil your Vortex cards for any commodity you’ve claimed that turn for a small payment, but for ship orders you’re only allowed a maximum of three commodities, with any excess being lost. Players need to plan their placement carefully to maximise profits and avoid being left with cards they can’t complete due to other players taking their spaces. More complexity is added with the Fractal Mirror cards being drawn every round that change the rules of the board. Perhaps this round they will block access to fuel, or maybe instead some spaces will only have a maximum of two slots for traders. This really changes the game, and considering one space allows a player to choose the next Fractal Mirror card, forward planning can be a solid strategy if you’re aware of what orders other players are trying to fulfil.

All this may sound a little complicated, but for each game I’ve played with different groups, everyone managed to get to grips with play by the end of the first round. The board looks busy, but most things are fairly clear, and whilst you always have a lot of choices, it was rare for anyone to be bogged down in analysis paralysis. You know what you’re aiming for, and if you can’t get what you want a secondary or tertiary option will probably be available to you. All else failing, you could always drop a trader on a Nova space to mess with another player. But I would never be so mean.For a game that’s coming to Kickstarter later this year, Merchants of Infinity is already very polished, with a great-looking board — having it based on the Mandelbrot fractal set was a lovely touch — and well presented cards whilst the meeples representing your traders are nice chunky plastic pieces. I feel some player reference cards would be useful, as we’d often have to look up what a certain commodity symbol was or the exact meaning of a special space. I expect these will be added later down the line, as will a few other items mentioned in the manual that aren’t included in this prototype. 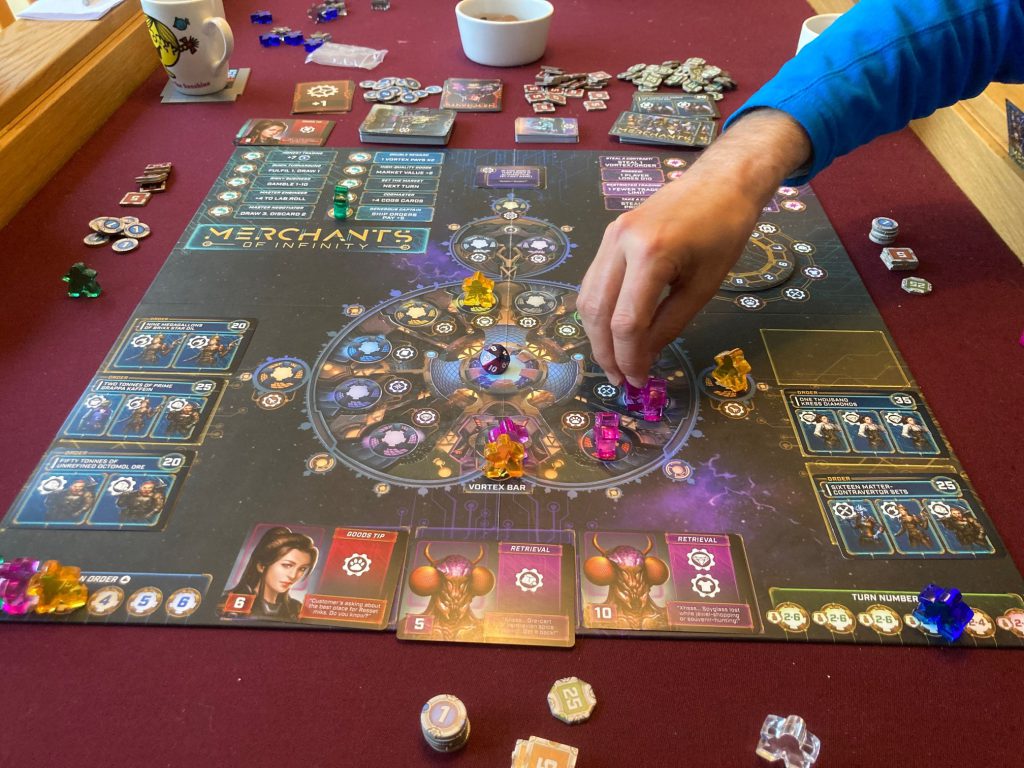 There is a single player option included too, but this is certainly the weakest way to play. Essentially, you have a series of instructions for each game-controlled trader. The first trader will be placed in a certain position, unless other events have already happened, then trader two will go somewhere based on another set of criteria. At first it’s a little clunky, but once you’ve memorised most of the instructions you can get through it quickly enough. The game is clearly meant to be played with other players, with four to five being the gold standard in my mind. It’s nice to have this inclusion, but I don’t feel the solo gamer should jump on this game.

The groups I’ve played Merchants of Infinity with have all been quite positive about the game, and are keen to give it another go. The slightly cut-throat nature of blocking players from gaining commodities or stealing their profits aren’t too mean spirited and give more player interaction than some worker placement games would normally, and the Cog Card mini-game at the start of each round is fun all by itself. Each time we’ve played the results have been very close as well, sometimes as low as ten points between first and last place, meaning every decision was crucial. I’m not always the biggest player of this type of board game, but I’ve really enjoyed it and am looking forward to seeing how it develops further before coming to Kickstarter in early 2023.

You can find more information about Merchants of Infinity from the dev’s website or by following their Twitter.