Karuba: The Card Game is a, well, card game all about exploring in the jungle, looking to lead specific adventurers to the temples they have been tracking, while grabbing as much gold and gems as you can along the way.

Karuba is a really interesting game, as everyone is working against each other, creating their own map, each using identical decks. Two to six players each take a deck of cards, each card being, essentially, a tile that will be used to make your map. Once you have your deck, you must place it face down and draw three cards. From these three cards, you can pick two to play in the next round. After everyone playing has chosen two, everyone reveals theirs at the same time. 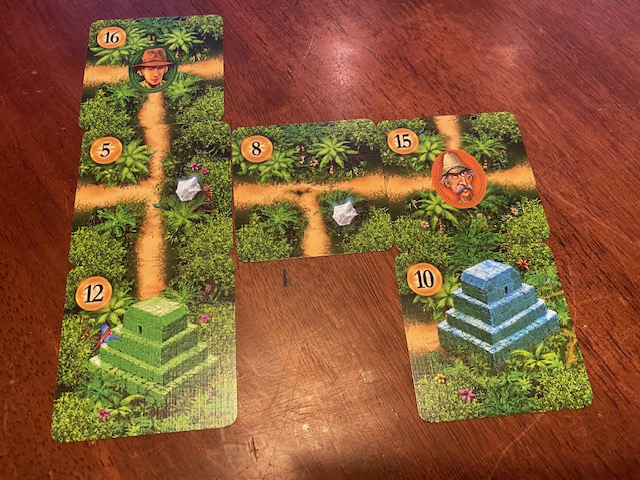 In the corner of each card is a number. Players add up these two numbers and the player(s) with the lowest score has to discord one of their two cards. Each player is working to create a four by four grid using these cards, and cards must be placed with a side connecting to an existing tile. It’s not just this though, each card has a path on it, as well as point-scoring gems, temples or explorers, and you’ll ultimately win through building the most elaborate, completed, paths.

Some cards have temples while others have individuals on them, with specific colors around them. Those colored adventurers need to make it to their temple to gain points at the end of the game. They can’t run into each other either — if there is another person on the path it blocks the person from getting to their targeted temple. Placing these tiles in Karuba is how you mainly play the game. As this card game is aimed at younger players, as a sort of introduction to map building, there is a guide to how all of the cards look in the middle of the table, meaning you can see where a temple might need to be placed in relation to a person trying to get there. 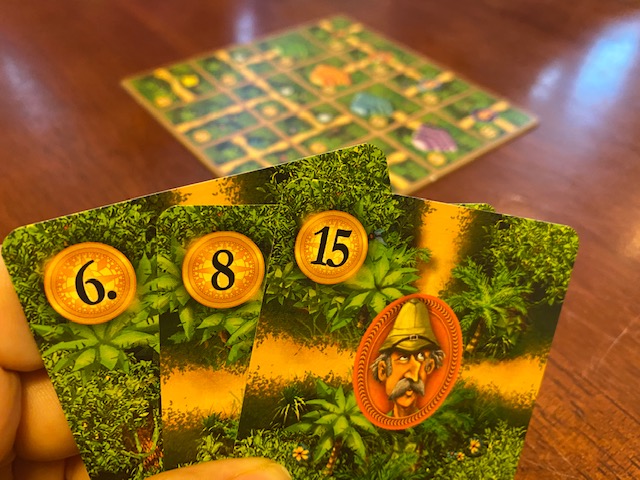 Once all of the tiles are placed, everyone can start adding up their points! You can get one point for each adventurer who makes it to their temple (they always walk the shortest path) as well as bonus points for each bit of gold or gem that you come across along your way. Karuba is a quick game, lasting about fifteen minutes, making it good for smaller children and families.

We really enjoyed Karuba, especially as a taste into map building game types, as the entire game was very bite-sized and easy to understand. Having the scorecard in the middle of the table to show the way all of the paths work is very helpful when planning, but there is still a lot that can go wrong if you don’t keep the value of each card in mind. Hard decisions need to be made as cards get discarded and in the end,  it is a case of taking risks in planning elaborate maps which will score you the win.

You can find Karuba on Amazon.

Knights will all come tumbling down in Knuckling Knights