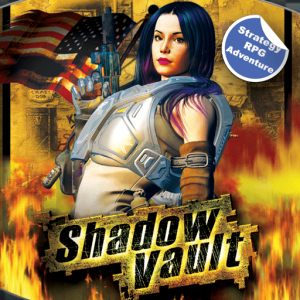 Originally launched back in 2004, Shadow Vault is a post-apocalyptic, turn-based, squad based RPG set from an isometric perspective where post-apocalyptic becomes sci-fi, becomes time-travelling.

The aged art style, reminiscent of FFVII’s Midgar, Septerra Core, Gorky 17 and, of course, the early Fallout titles. It’s easily it’s most redeeming factor, and probably the main reason I would pick up the game – although it appears that a few of the more awkward limitations of older titles (regarding ports) appears to have persisted. A quick look quickly shows off that that UI & the screen resolution are both set at 90’s standards which are now particularly ugly on modern screens.

The story also shows a lot of promise, and, well, I do enjoy a good squad based RPG; Fallout Tactics & Jagged Alliance were major timesinks of mine.

Shadow Vault is ready – it’s been ready for a decade apparently – and so will release on Windows PC shortly after it is greenlit.