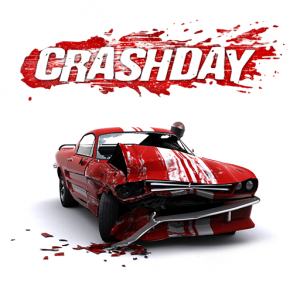 I really like the level creator, and the wacky stunt tracks that it can spawn. It’s also extremely clear from the trailer that the destructibility and vehicle damage has been a top priority alongside physics.

If the game looks familiar then there’s a reason for that – the original CrashDay launched in 2006 featuring several different multiplayer modes, notoriously focusing on various destruction derby style modes, and a string of stunt competitions.I can’t comment too much on the state of the industry in 2006, but I can certainly state that ’06-’07 saw a major change within it’s AAA graphical landscape as dual-core PCs became more widely accessible and a lot of games announced for the 2015 Unreal Engine 3 started releasing.

While I don’t know whether the shift in what was accepted as top-tier graphics is what caused the original’s lagging 68% metacritic score, I’m sure that the revised graphics for this reissuing will stand strong along other launches at the moment.

The multiplayer should be a damn-site more accessible through Steam now too, back in 2006 the service was only just starting to shape up into the platform we now know intricately; Half Life 2: Episode 1 was out, and HL3 was sincerely hoped for, rather than reduced to a bitter meme.

Crashday is set to launch on PC this Autumn.