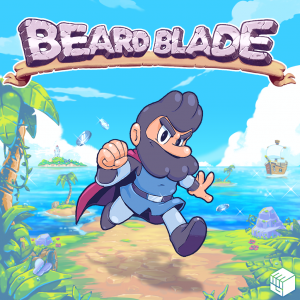 Save your hometown as a farmer-turned-hero using your magically enchanted beard.

BeardBlade has completely nailed the 16-bit platformer style both through it’s visuals and it’s absurdity. In a genre where a mushroom-crunching plumber, a robot boy, and a blue hedgehog are three of the best known characters you can safety get away with having a character who has a magical beard they can use to attack people with, or cling on to platforms with.

Not only that, but the level select map, the quirky enemies, and the barbershop poles as checkpoints — it’s all bloody wonderful.

I won’t dwell on this one for too long, as we do try to keep these things short – so I’ll simply close with the blurb for the game from the greenlight page.

“When a quaint seaside town is invaded by imps, a humble bearded farmer assumes the role as hero and chases them back to their vile isle. After an unsuccessful attempt to reclaim the stolen goods, our hero is thrown into a fortress dungeon and left for dead. While imprisoned, he befriends his cell-mate, a reformed wizard-turned-barber, who enchants his beard, granting him amazing new abilities that allow them to escape the dungeon. Now aptly dubbed “Beard Blade,” our hero sets forth to thwart the imps and uncover the truth behind a dark secret…”

Beard Blade is currently listed for an early 2018 release date, although the Kickstarter more specifically notes January. It is listed as launching for Windows PC, however other formats are likely open for discussion.