The 70s and 80s were a time of moral panics, especially in the United States. The alleged spread of Satanism and drugs, video games and Dungeons & Dragons were among the things that supposedly threatened the very fabric of society. FAITH, developed and published by Airdorf Games, takes us back to that time.

FAITH is set in 1987. You take the role of a priest visiting rural Connecticut. One year prior to the events of FAITH, two other priests were sent to a family of five in the area to perform an exorcism. That night, only two people left the house. Now it is up to you to end this. 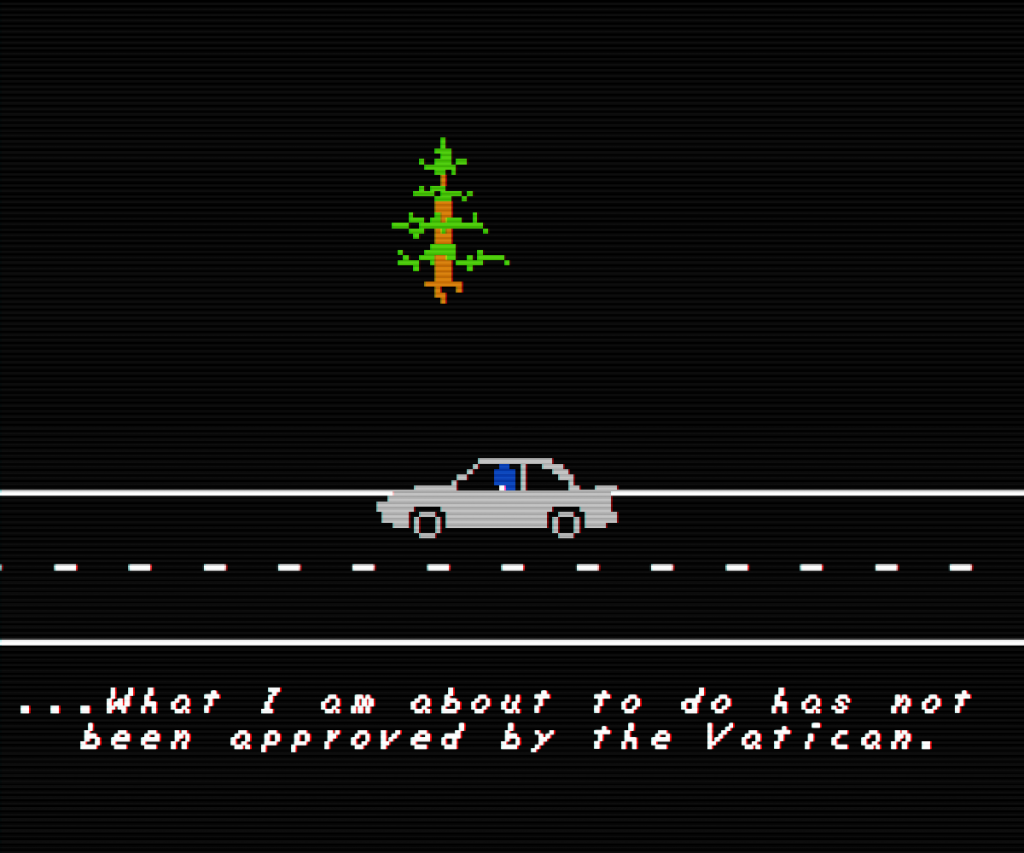 If this sounds familiar, you have probably seen The Exorcist, read the novel it is based on or consumed other media in this genre. The plot of FAITH takes inspiration from that era, as does its visual style. The graphics resemble a microcomputer or late-era Atari 2600 game. Backgrounds are exclusively black and scan lines stretch across all objects.

The controls are equally simple and while FAITH does support both keyboard and XBox controllers, you could play it with a one-button joystick. WASD moves your priest around and a hit on the spacebar is used to interact with objects — it also brings out your trusty crucifix.

The crucifix is not just there for decoration. It is essential to scare away the monster that haunts the woods around the family home. For the most part, using your titular faith this way is the only weapon you have. In addition to that, the crucifix also allows you to exorcise possessed objects. 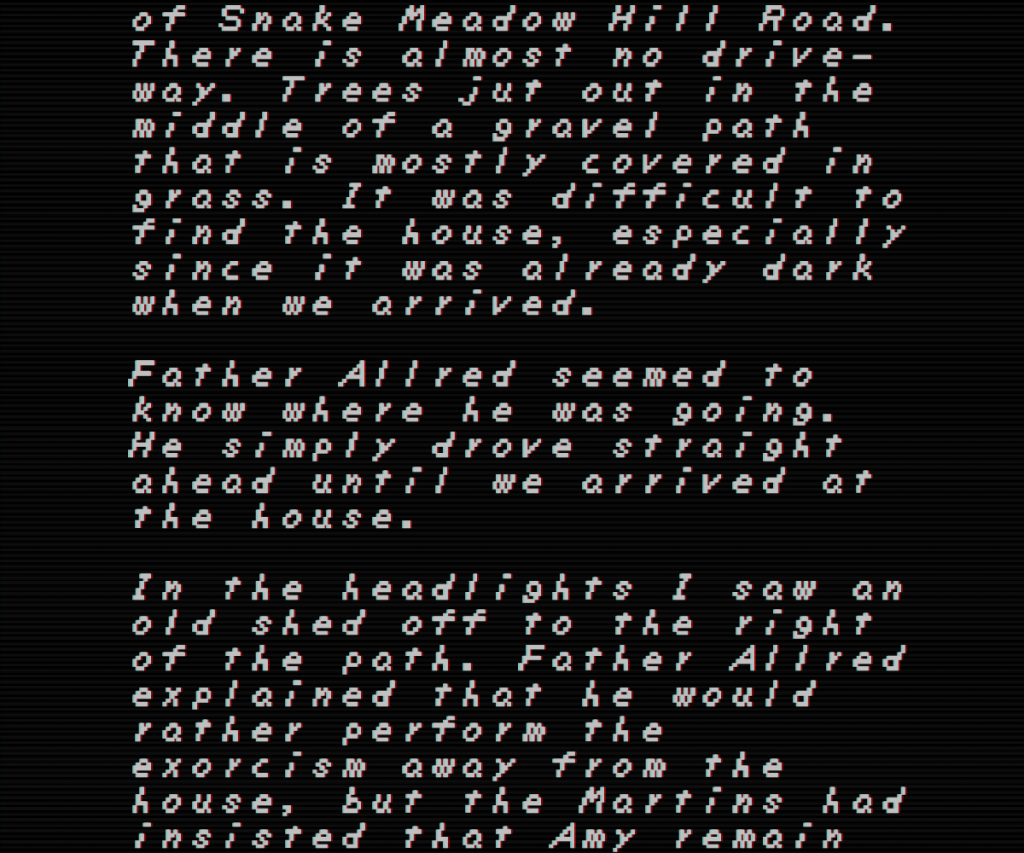 Once cleansed with the power of The Lord, possessed objects spit out a clue. These clues — newspaper articles, letters and similar objects — shed light on the background events of FAITH. Unlike the game proper, the pieces of lore are rather text-heavy. They are worth reading nevertheless and even grant a bonus in later parts of the game.

FAITH is not a particularly long game. Its first part consists of the woods: a series of looping screens. Somewhat samey, the ever-present monster and aforementioned clues encourage you to explore them thoroughly and keep you on your toes. The second part of FAITH is set in the family house.

At this point, FAITH becomes a bit more action heavy, possibly to its detriment. Your priest moves a lot slower than almost everyone else in the game. This is particularly frustrating when the monster pops up on the edge of the screen just when you are about to leave it, giving you no time to draw your crucifix before it eats the poor parson. 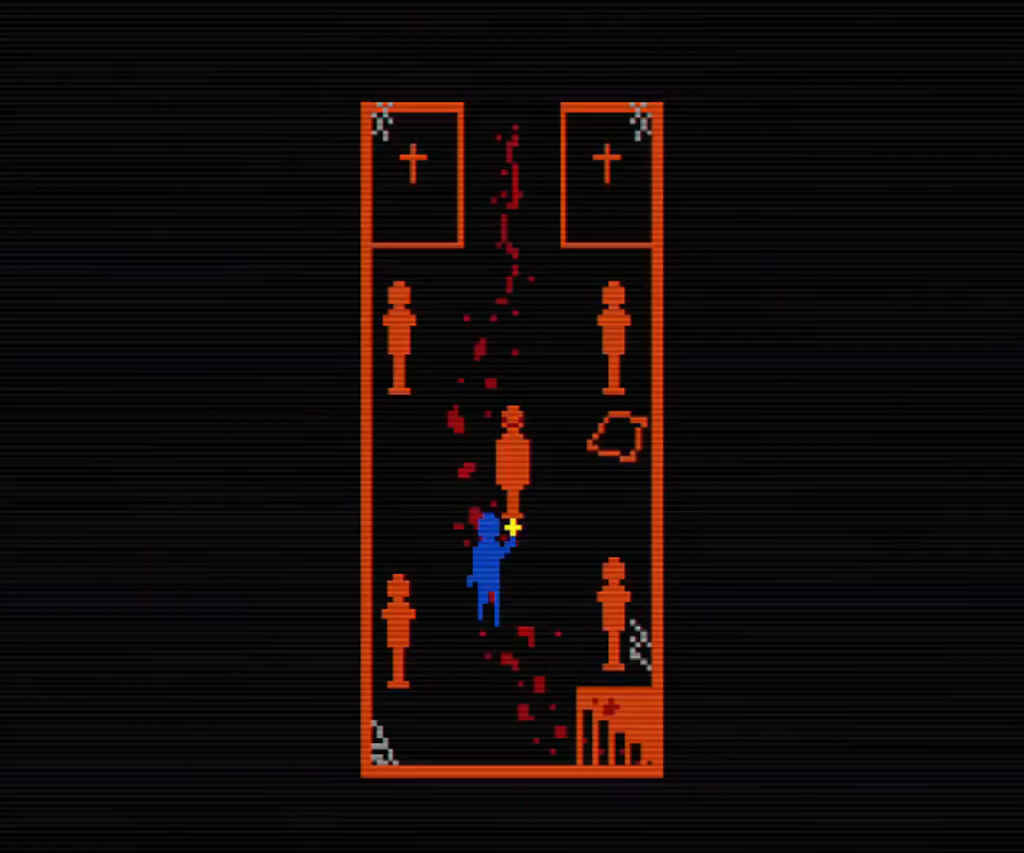 One-shot deaths are partially mitigated by FAITH’s checkpoint system. Nevertheless, replaying parts of the game is not particularly fun when combined with the priest’s slow walking speed — especially when areas have to be explored a second time and in the game’s more lethal second half.

Overall, FAITH is a fun little horror adventure that takes us to a dark era full of demonic horrors and devoid of hot pink. It balances its homage to games of old with modern sensibilities fairly well. Those who like retro games and are fans of horror should give it a try.

FAITH is available on PC now, via Itch.io.