Everyone loves the idea of ultra-violent future sports, right? For those of us who were brought up in the 1980s, there were times when it seemed certain that by 2018, we’d all live in a dystopian wasteland run by warring gangs who pit the common folk against each other in grizzly bouts of mortal combat. Thankfully, such appalling sport is reserved for politicians, whilst the rest of us must make do with more mundane pastimes such as computer and board games, which is what brings me to Dreadball Second Edition.

Set in a near-future vision of shadow chrome and neon, Dreadball Second Edition (from now on just Dreadball) is a directly competitive, arena-based sports game where two teams participate in a relatively violent spectator sport that is reminiscent of basketball. Centred around a tug-of-war scoring system and featuring several ways to score, Dreadball offers more flexible ways to play than most games of the sort and it also plays out faster. 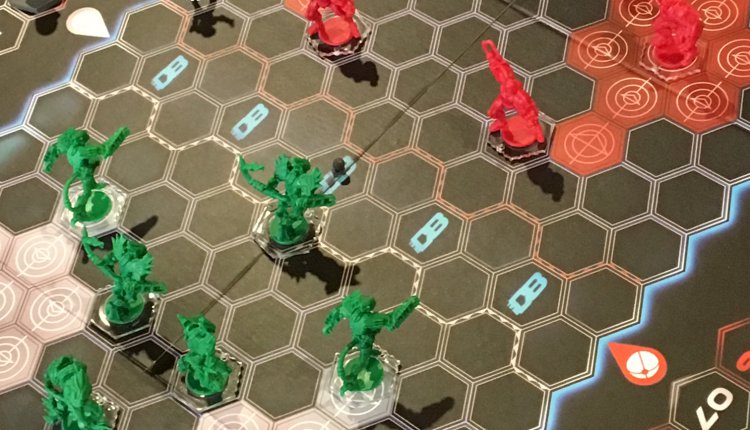 In the base game, the two opposing teams are the Ninth Moon Tree Sharks and the Draconis Allstars, or in other words, a team of lizardmen versus a group of robots linked by a sentient AI. The original game featured the classic combination of orcs versus humans (just as Blood Bowl does) but the inclusion of entirely different, more interesting teams is welcome. That said, Dreadball now supports something like thirty teams in all, with many different options having been released in the past five years.

The box also contains a clear information sheet about each team, as well as a captain miniature and a separate stat sheet for each. The inclusion of captains is a nice feature because it allows players to dabble with some of the more complex and interesting rules, which do not otherwise rear their heads when playing with the base game alone. What I’m basically referring to here is a keyword system which works much like it does in other games — ‘nimble’, for example, benefits small and agile players, whilst ‘linked’ is used to represent the neural net the Draconis All Stars benefit from. 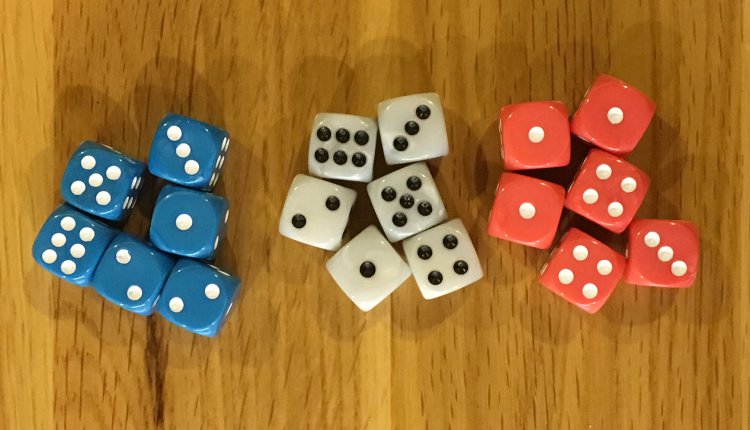 In broad terms, Dreadball is on a par with the average tabletop sports game, although it uses a smart dice-based system that lets both good and bad luck influence the game in exciting ways. More or less every action involves either opposed or unopposed dice rolls, with the number of dice rolled determined by a number of memorable factors and the outcome being a known measure of success.

Most of these success factors (as well as the number of dice rolled for each action) are determined by the class (or position) of the player who wants to undertake the action. In the basic game, there are three types of player, known as Strikers, Jacks and Guards. Strikers are fast and can pick up the ball and throw it efficiently, whilst Guards can’t pick it up at all, but get bonuses in slam situations. The Jacks can pick up, throw and slam, but don’t receive any particular bonuses for actions. 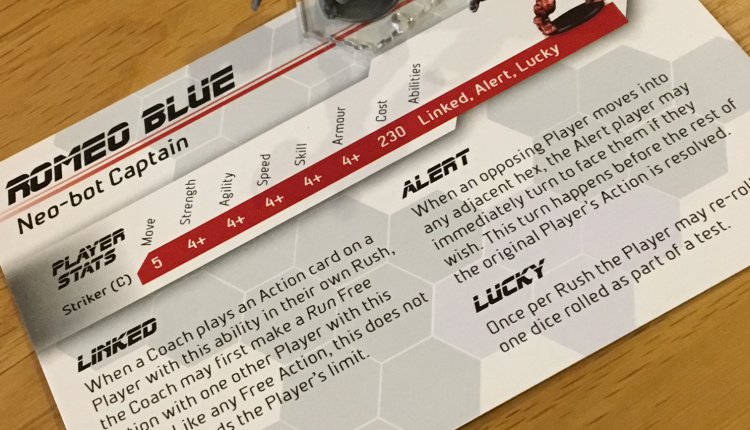 In the example above, whoever rolls the most successes (versus strength for the Guard and agility for the Striker) wins the slam contest. There are a number of possible connotations here — for example if the Striker wins, they can move one space away and turn to face, whilst if they had been slammed from the front, they may have been able to counter-slam. 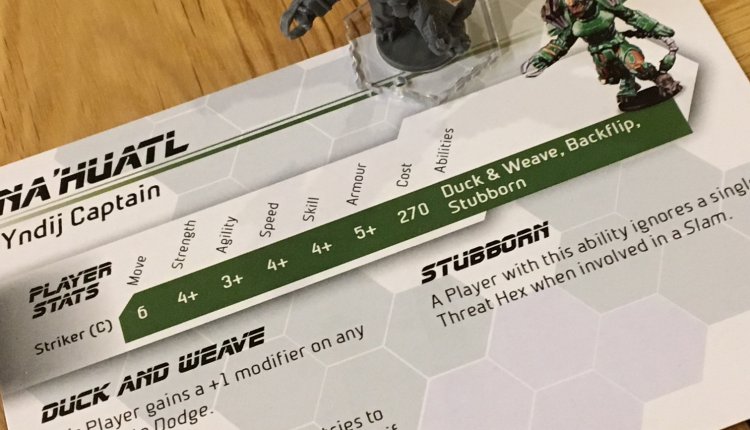 If any sixes are rolled, an additional die can be rolled. Whenever a success doubles the value of the opposed roll, there are further benefits, such as an extra action or, possibly additional fan support. I should also mention that slamming from the rear could be considered a foul, so if the slammed player remembers to call it as such, the on-board referee will be activated and may punish or even disqualify the offending player.

Whilst this large number of different possibilities does sound quite complex (and I suppose it is, if you attempt to remember it all), it actually isn’t in practice because much of it conforms directly to common sense. It feels sensible that being slammed from the rear is harder to defend, whilst it is entirely reasonable to imagine that Strikers are more evasive. This common-sense approach conforms to most of the keywords, too, so as long as you keep your team cards close, you can’t go far wrong. 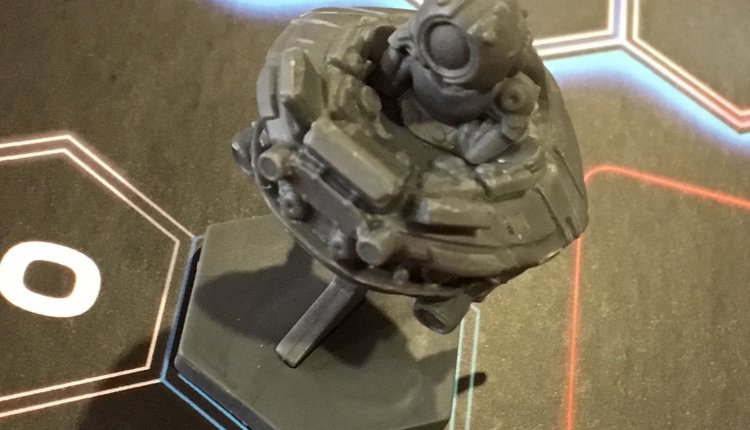 Turn (or Rush, as the game calls it) structure is fast in Dreadball, thanks to an action assignment system that works really well. Basically, each player has five actions to use each turn (as represented by plastic tokens) and can spend up to two of them on an individual model. Dropping the ball, being slammed or doing something equally silly ends the Rush early, so just as in Blood Bowl, performing low-risk actions first is a valuable strategic consideration.

Action tokens can also be spent to purchase cards from the Dreadball deck, whilst some teams can also draw those cards as a simple benefit of who they are. Most cards offer a simple benefit such as moving a Jack for a second time, so by using them in combination with good or bad rolls, it’s possible to string together some amazing moves or mitigate situations that might otherwise be disastrous. One thing that I really like about Dreadball is how sixes allow another die to be rerolled, which can occasionally result in fantastically thematic diving slams or desperate last-ditch throws. 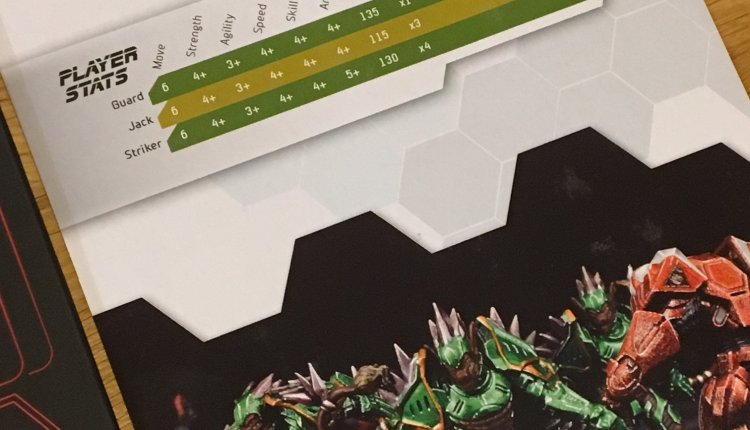 Another welcome feature of Dreadball is the manual, which acts both as reference guide and tutorial, as well as offering a structure for ongoing play. If you want to create a league with your friends, then all the information you need to do so is contained within. Another incredible inclusion is the Dreadball Ultimate mode, which is basically a variant board setup printed on the back of the already well laid-out and superbly printed board.

The miniatures themselves are functional without being exceptional, although there are some nice features. Firstly, each miniature is a single cast, produced to a high level of detail, albeit at a smallish scale. Every one is positioned on small, clear bases which indicate the miniature’s facing and have a slot to house one of the (sadly much too tiny) balls that come included in the game. There’s a fair bit of character to the models and I am certainly keen to see what some of the more interesting teams have to offer. There are some nice bonuses in the box, too — such as the captains and the referee, score track and rush track miniatures, which could simply have been represented by counters. 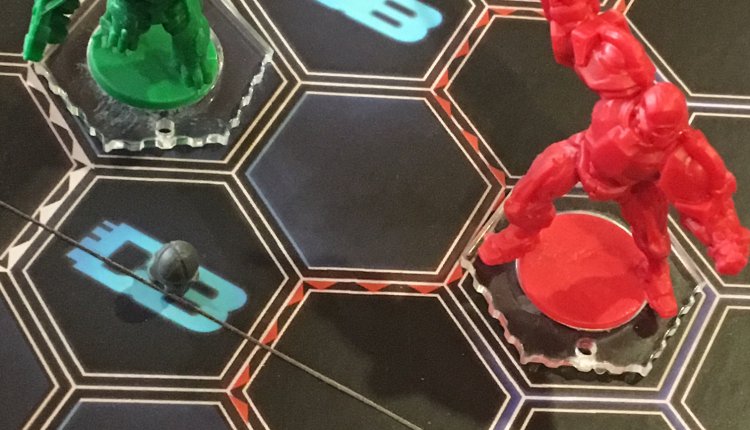 I’ve been a Blood Bowl fan for twenty years and I’ve never felt the need to replace Games Workshop’s classic but creaking game with an alternative, but Dreadball isn’t just futuristic in theme, it is also much more forward-thinking in terms of mechanics, speed of play and excitement level. The scoring mechanisms and lack of a structured kick-off after scoring (players just stay where they are) mean that play constantly ebbs and flows, which is further enhanced by the tug-of-war scoring. 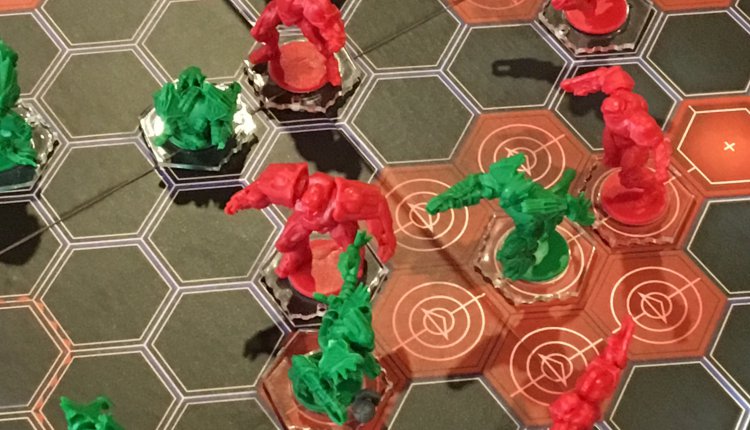 Ultimately, the high standard of gameplay, rapid turn structure and level of variability make Dreadball very appealing, as does the strong value for money in both the basic box and the many, many additional teams and individual miniatures available to expand it. If you’re after a league-play proposition, this could be the premier choice. By contrast, if you just want an interesting, occasional sports game, the ease of teaching still makes it a strong contender. Well worth a look, that’s for sure.

You can currently pre-order Deadball: Second Edition over on the website of game developer Mantic Games.