Dash Dash World is a VR racing game that borrows from other kart racers, but at the end of the day, does its own thing, for better or worse.

VR is a great platform for racing games. A fixed cockpit provides ease from motion sickness allowing the exhilaration of speed, and the high stakes of outpacing someone makes for a fun-filled race each and every time. Dash Dash World not only does VR racing well but gives you tons of options to customize your experience and make sure that you come back to play again and again.

On the first fire up, Dash Dash World throws you into a tutorial that teaches you everything you know to get your kart moving, how to pick up and throw items, and maybe most important, how to drift. Once you get the hang of these concepts, it’s off to the races! Races begin with a countdown from three and offer the same speed bonus that you’re likely familiar with if you’ve played other kart racers, that is if you time the gas pedal just right.

The weapons are wild and definitely add to the wacky feel of the game. Instead of banana peels and shells that rough up other players, most of Dash Dash World’s power-ups are toys, and that further compliments the game’s child-like aesthetic. A ‘crashcodile’ is a huge wind-up toy that tears down the track in one lane and explodes on contact, while a ‘bomber bee’ grenade creates a patch of sticky honey that slows down karts, but it can be frozen with a blizzard glove, negating its effects. There’s a lot more to the items than first glance, as some of them can be stopped by others, and ultimately, that adds to the complexity and skill of the game. 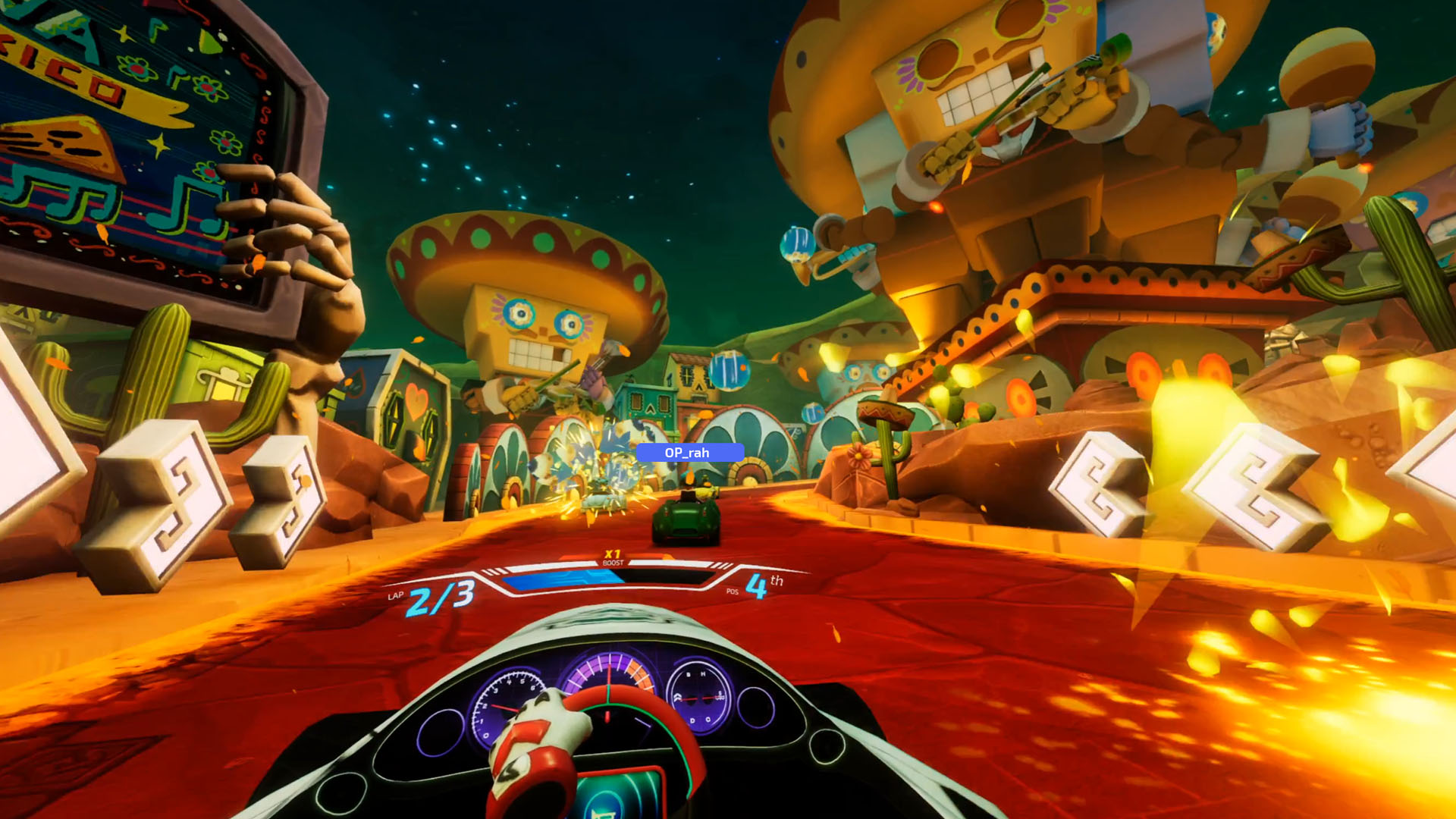 Racing isn’t simply limited to going head to head against bots in a career mode that has a comic book rendering explaining the story of each character you are racing against; there are plenty of other modes. You can practice any of the tracks at any time, sure, but where the real meat of the game shows itself is in online multiplayer matches. Jumping into an online matchmaking race is as simple as pushing the ready button in the middle of your interface. If you want to customize your quickplay options, you can dive into the settings first.

Racing online with real opponents definitely shows why racing is better with friends or enemies. Real humans controlling the karts make an exhilarating difference that shows a racer that can make mistakes but offers actual competition. You never know whether saving an item will be the difference between first and fifth, just like the greatest couch-comforted matches of Mario Kart. Players can talk to you, wave at you, but most importantly, throw items at you, so most of the time, you’ll be worried about their skill rather than their wit. 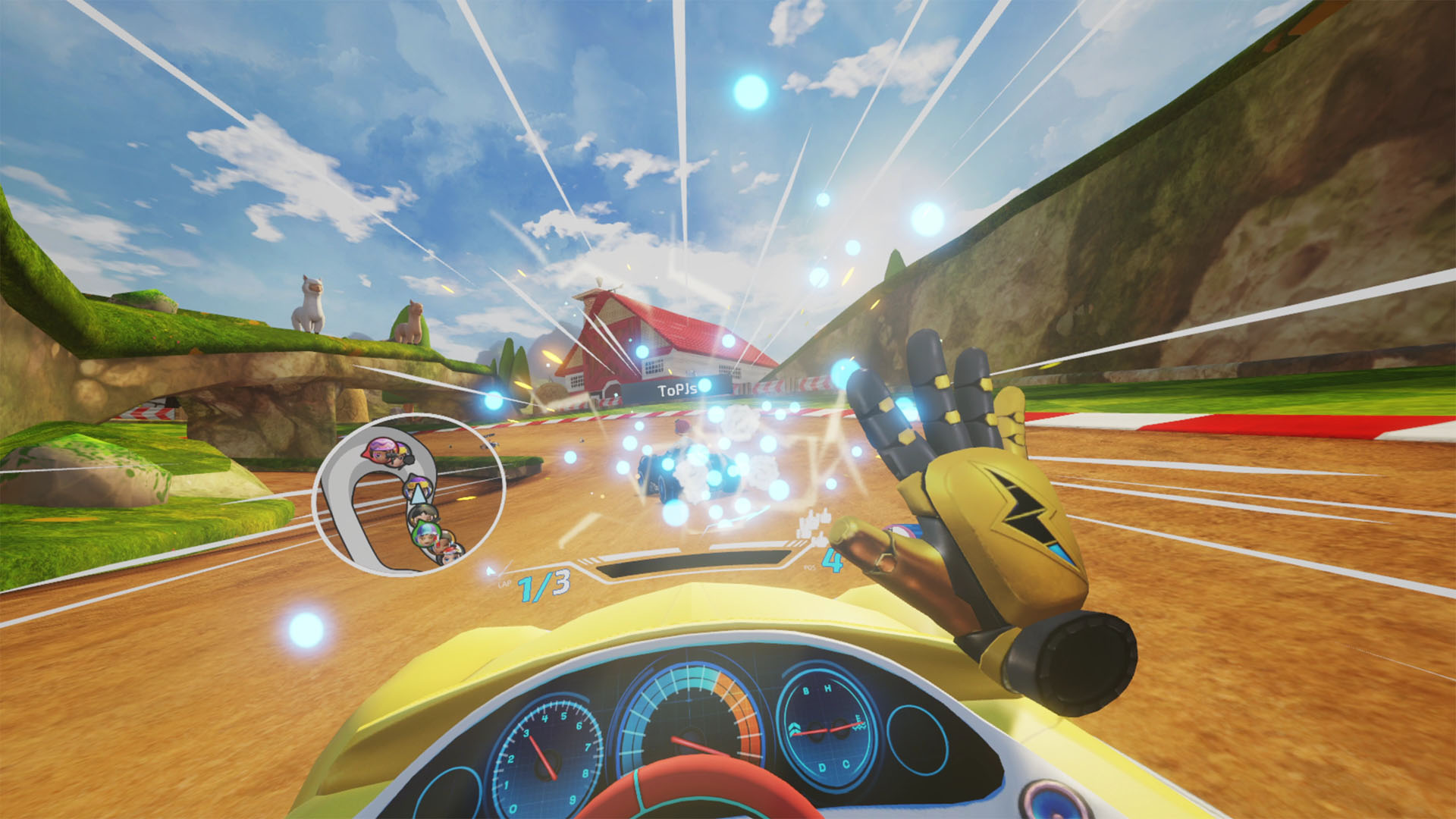 All this racing would likely get boring after a while without some kind of enticement to keep it lively. Thankfully, or perhaps not, that’s where the game’s loot box approach comes in. I will forewarn that there is a kind of microtransaction in the game, but it is totally purchasable with earned funds through playing multiplayer matches. These boxes will offer you a random item to either customize your character or your kart. Additionally, there are limited-time events and challenges that offer themed customization items as rewards, so there’s plenty to strive for every time you race.

Dash Dash World has a huge assortment of tracks to keep you busy and plenty of modes to keep you racing into the night. The controls are tight, the VR options include plenty of options to keep you from getting motion sick, and the game is just downright fun to play. It may not be as polished as CTR or Mario Kart, but it aims at and totally destroys the target of creating a worthy VR alternative to its flat-screened brethren. With seasons and events constantly changing in the Dash Dash’s world, there will always be a race waiting for you with fresh competition.

Check out Dash Dash World on Oculus or Steam. The game is also currently in development for Playstation VR.