There’s no doubt that for a continent so rich in culture, Africa is massively under-represented in both board and videogames, with only a few examples in each area that truly explore mankind’s cradle of life. Kitara, which is designed by Eric B. Vogel and published by IELLO, is one of the first board games that I can recall to truly explore the world of African mythology.

Kitara lands in a relatively small box, considering some of the themes it handles. The first thing you’ll notice when you lift the lid is that classic IELLO production value that is just breathtaking. In this case, Kitara features player mats that each depict a player characters hero, all of whom ride on a gloriously realised giant animal — a lion, a rhino, etc. 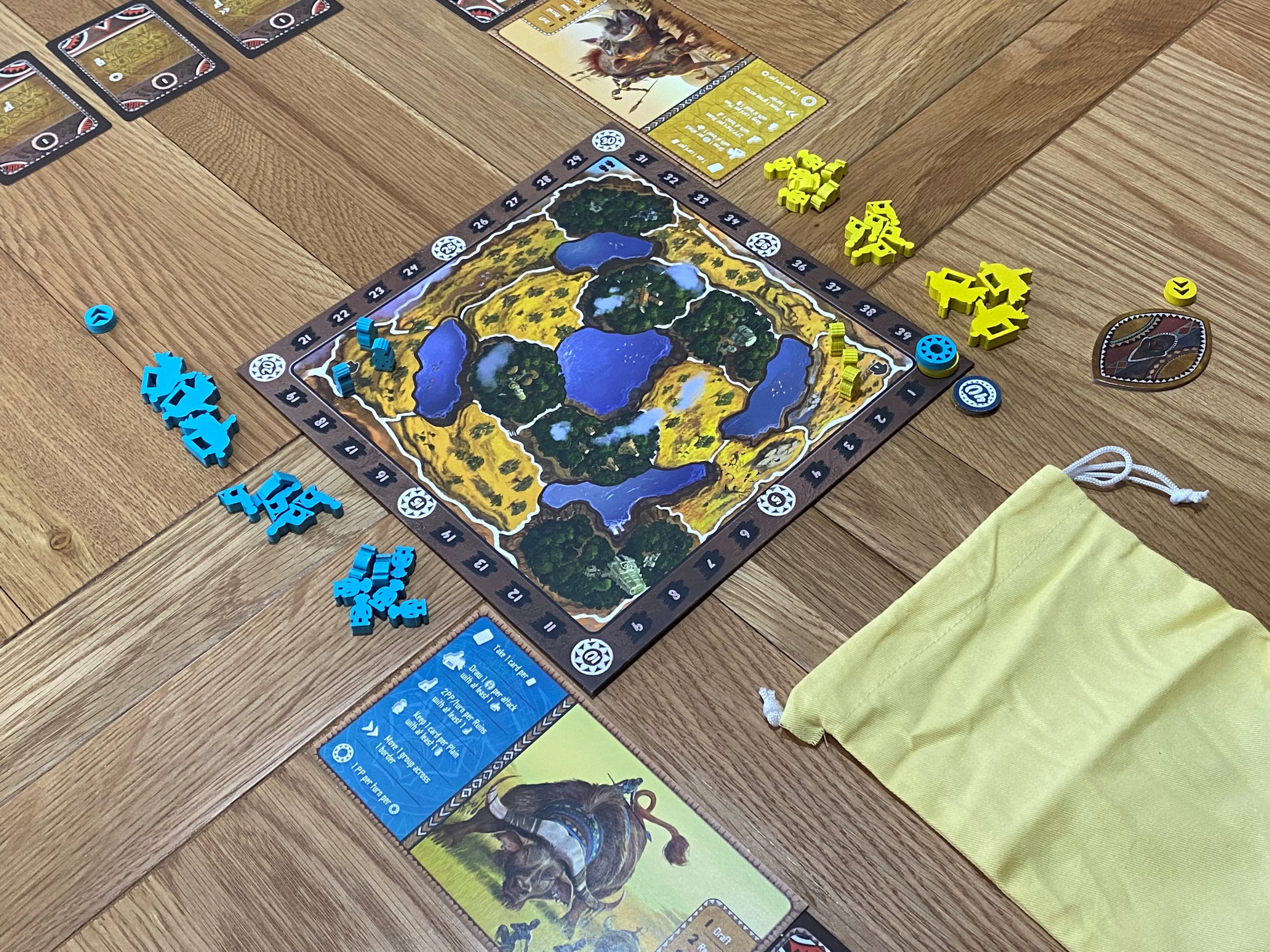 This artwork pops not only on the player boards, but also on the main game boards as well – one of which is dedicated for two players, the other of which supports three players on one side and four on the other. Several bags of meeples round out the picture, with each of the four player sets including warriors, priest animals and a small number of heroes.

All of these components come together to present a fantastic package that fits neatly into the small box that Kitara is presented in. A high quality, glossy instruction manual rounds out the package, offering clear instructions for what is a relatively simple game, whilst also providing worked examples for the slight nuances that might otherwise confuse.

At its heart, Kitara is an area control game that features a small element of turn-programming, and very little punitive combat. The board scales entirely based on player count (to the extent that as I mentioned earlier, each count has a different board) to create a suitable amount of tension for the two different kinds of spaces — savannah (which feeds your people) and ruins (which score you points). 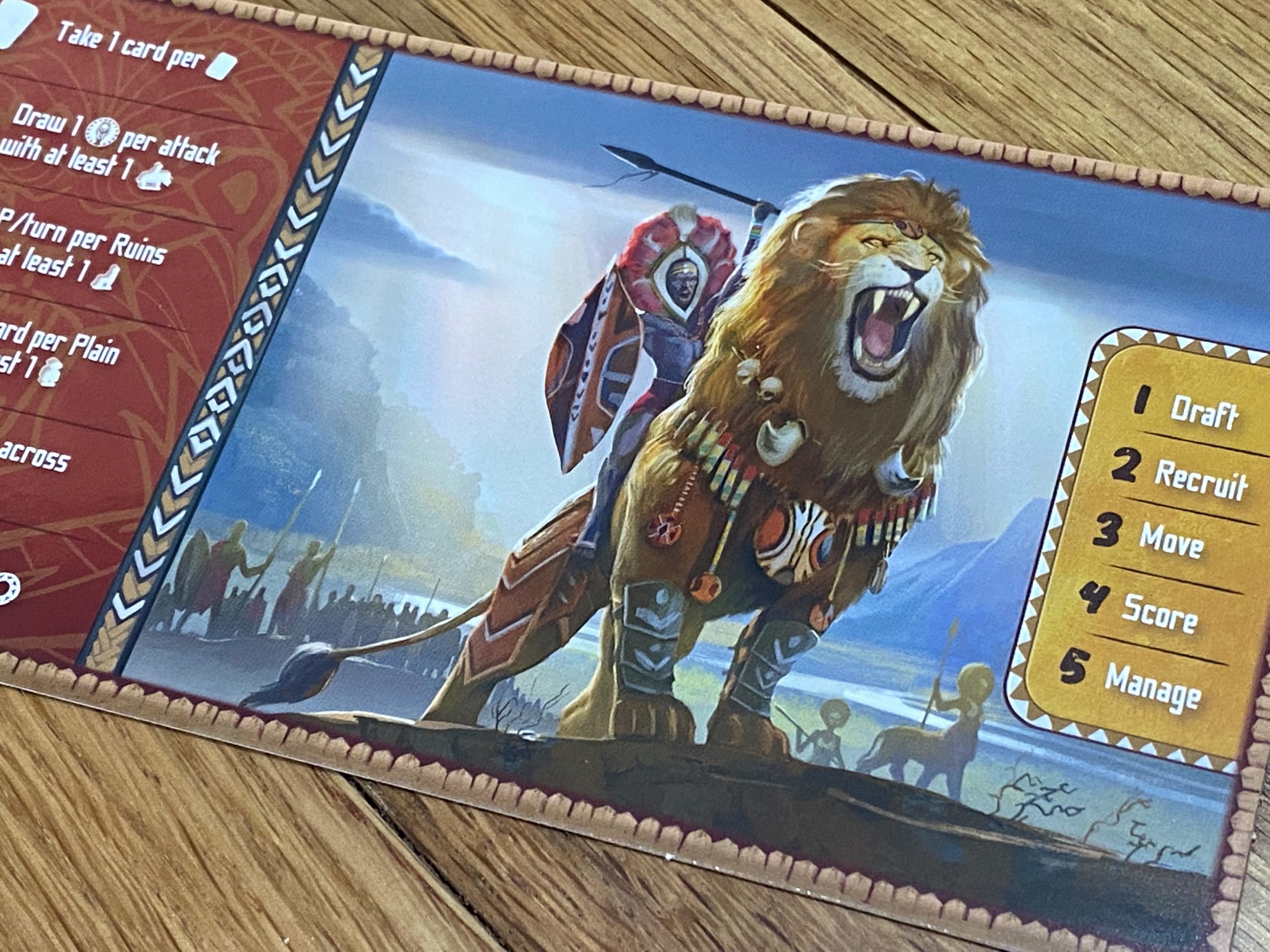 The game is played over a series of rounds, which is determined by a stack of cards that the players draft from each turn. This stack is initially built based on the numbers printed at the bottom, with the one-numbered cards at the top, the two’s next, and so on down to the fives. When one player drafts a five for the first time, the play continues until everyone has had an even number of turns and then the player with the highest score, wins.

Kitara actually plays in quite a unique and unusual way. The players each begin with the same starting card, which simply allows them to place three warriors onto the board, and shows two movement speed and two card icons. These icons are simple, but the number of each of them you have determines your strategy. 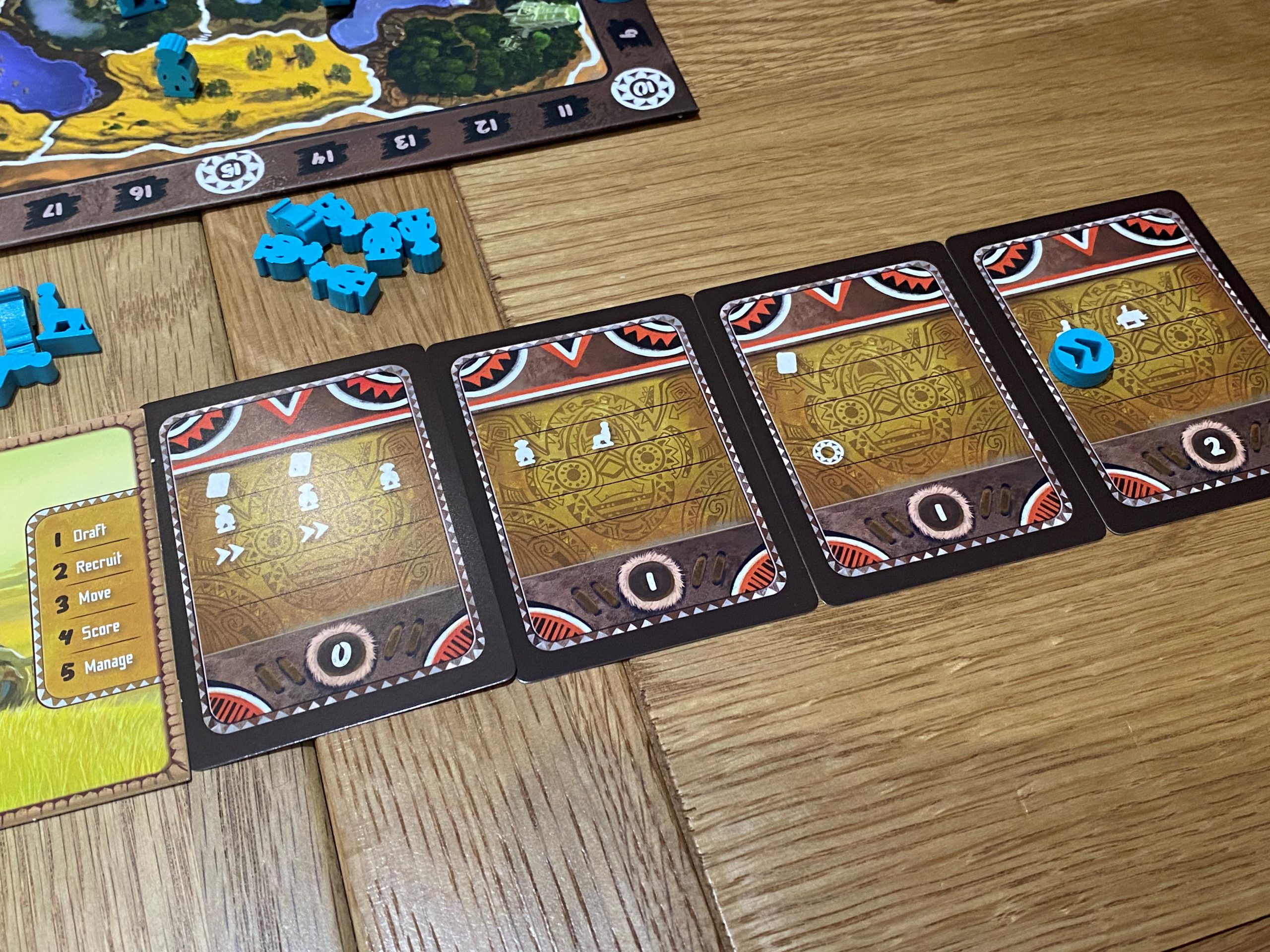 The first thing a player will do on their turn is simply draft a card. Six are laid out on the table on every turn, and depending on how many card icons you have, the further up the row (towards the more powerful, higher numbered cards) you can choose from. When you take a card, you add it to your existing personal row of cards, and for effects like this, you add up the total number of card icons on all cards in your row to determine your benefit.

The next line on each card is your population — indicating symbols for warriors, priest animals and heroes. The cumulative number of these across all your cards is how many of each you should have on the board at any given time. Next is movement, which is how many spaces you can move your armies each turn. Finally, there are score icons — each of which is worth one on its own, and as long as you have one, you can score any ruins spaces occupied by a priest animal.

Players use their personal cards to draft more cards, place their pieces on the board and them move them into advantageous situations — ruins spaces score points with priest animals, heroes can go into battle and draw point tokens from a blind bag and warriors can occupy savannah spaces which pay for the cards in your tableau. Yes, for each card you have, you must hold one savannah (except when a card has a symbol to show that it costs no upkeep) or discard until the two match. 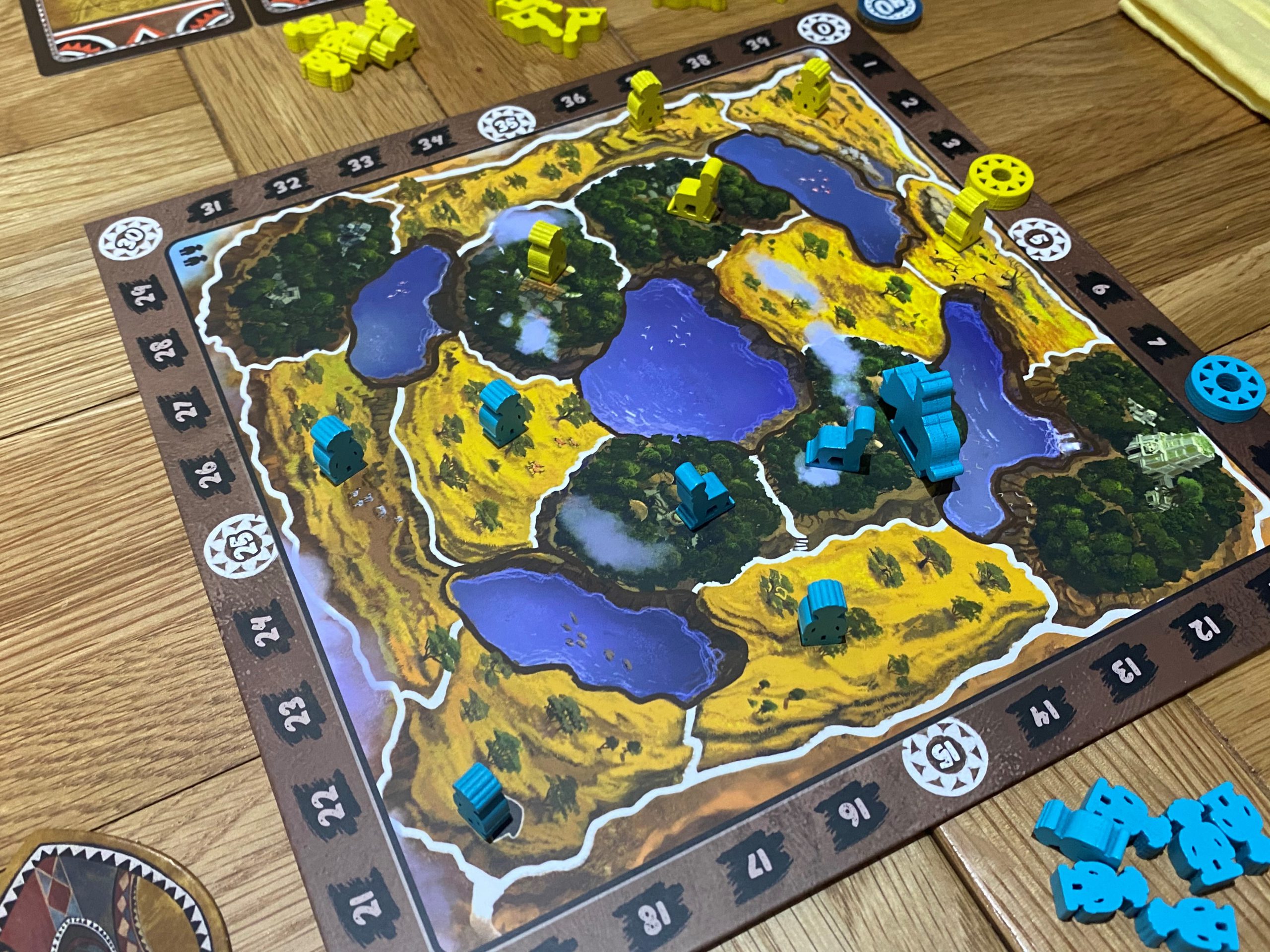 Combat is determined entirely by the number of units you can bring to bear. If you have a total number of warriors, priests and heroes greater than your opponent when you move into their space, you will push them out. Units are never killed or removed in this way, they must just retreat to a neighbouring friendly space.

Thanks to the way in which each board is designed specifically for the applicable player count, the way that players compete for land in Kitara is incredibly tight. The difference between the cards is bigger than you might think, and games vary wildly in terms of who gains the upper hand. A player may have a dominant number of warriors, for example, but if someone else has a hero and can win a few battles early on, then they will have an unknown amount of victory points hidden until the game ends.

There’s a strong early tactic to get priest animals out and have them move quickly into ruins, but if they are overwhelmed by warriors — especially with heroes in tow — then that tactic won’t work for long. The interesting thing about this is that the value of each kind of unit (aside from being obvious because of the names of the pieces) isn’t made clear. It takes a few games to learn that a card that has two warriors and a score icon on it might only be the same value as a card that just supplies a hero. 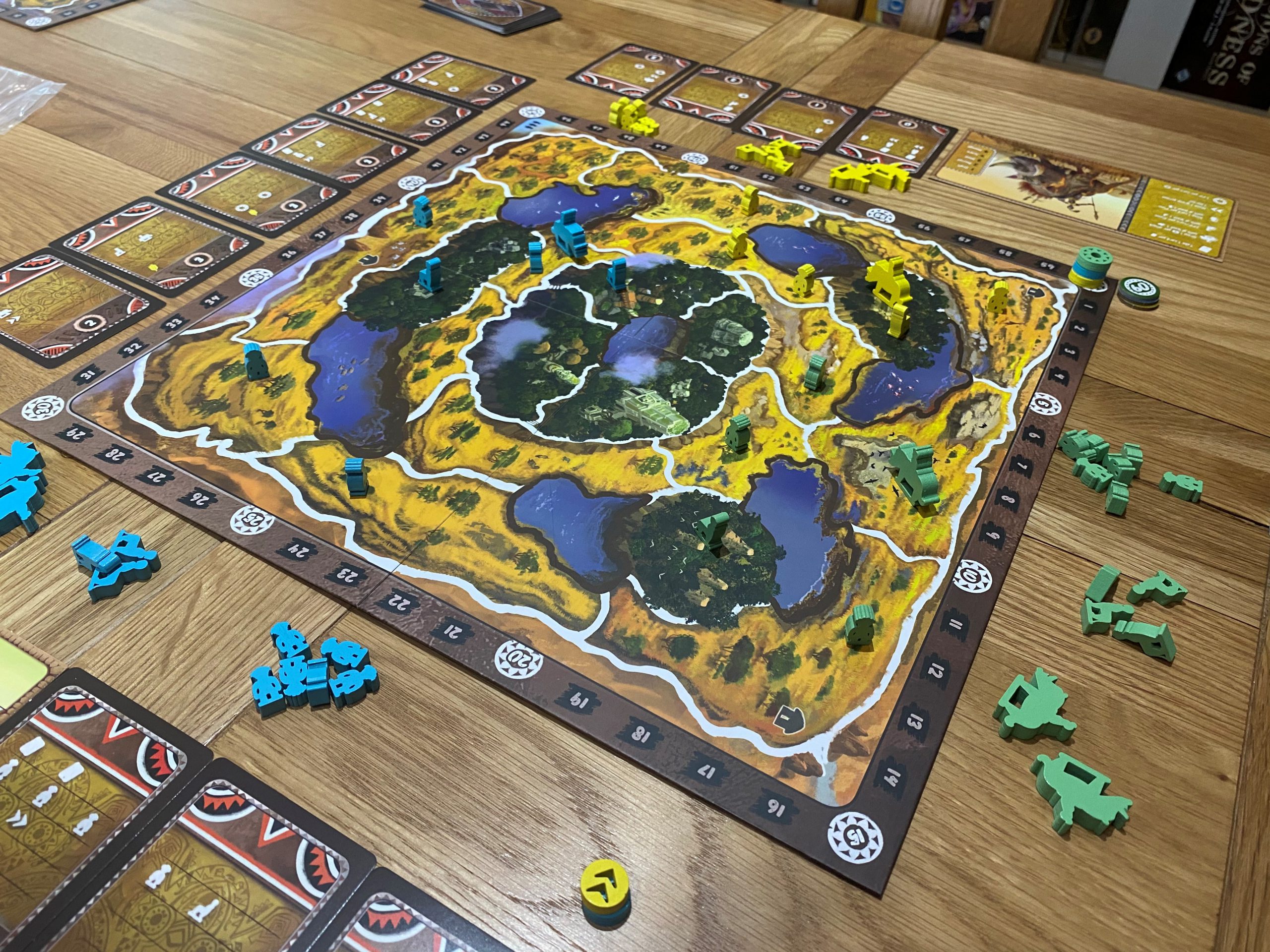 I haven’t come across something quite like this before — where you’re not “buying” units for more or less value, but have to determine their worth based on your specific situation — and I really like it. There’s no accountancy as such, and no one player can gain an advantage due to some random economic factor. It’s just a matter of ensuring you have enough savannah spaces to pay for your cards, and sometimes, if a card has served its worth, you might even drop it willingly to gain a better board position.

When you combine the unique gameplay of Kitara with the exceptional looks and the welcome, unusual theme, you have a very interesting prospect. This is a simple game that almost anyone can play, and I must say that this simplicity is both a strength and a weakness. Kitara is very much a cut down Blood Rage (or similar) and sometimes that is exactly what you need. On other occasions, you might crave something more complex, that does have that multi-layered economy and where the decisions are not quite as straightforward.

Overall, I think Kitara is a really noble idea. There’s clearly a real passion for the theme which designer Eric B. Vogel has gone to great lengths to explain over various diaries, in the manual and on BoardGameGeek, and the game itself is beautiful and rich to play. The mechanics may not be complex, but there’s enough scope here to enjoy the decisions you make, whilst at the same time newer players will not feel overwhelmed.

You can purchase Kitara on Amazon.