Now, you may have read my previous article talking about the prototype version of Adventure Mart — which I got to play at UKGE back when events were real and going on. I have, since then, got my hands on the full copy and was able to actually play it! Let me start off this review by saying the full game did not disappoint.

Adventure Mart is a competitive deck building game, that is meant for two to four players, where you need to run a store that contains loads of different items that heroes would like to purchase! This game runs for about 45 minutes to an hour, and is for players aged ten and above. The time frame is limited to the number of days — as your shop will only be open for five days in total — but there is a lot going on during this time period to keep your shop interesting! 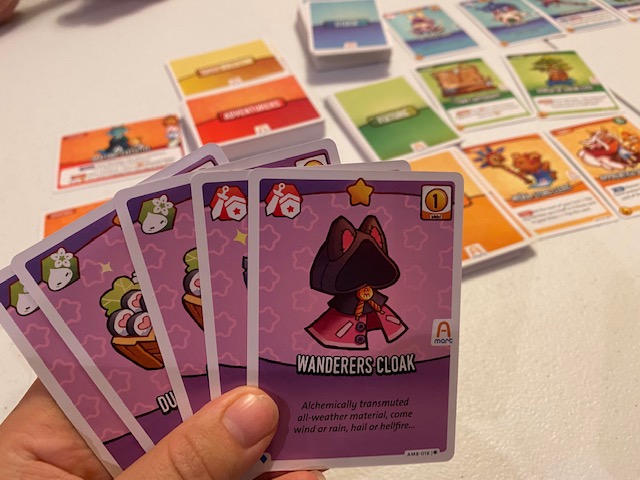 On day one, you and all of the other shops are the same — they have the same storeroom and the same starting value, and are basically the same store in a chain of stores. But, you will have time to make your store your own, through purchasing items, hiring staff, and investing in new products. Your store will consist of a basic stock room, as well as places for four fixtures or staff members, five starting coins, and a hand of five bits of stock.

Each day, you will see a selection of stock cards that can be purchased, as well as fixture cards (basically decorations for your shop) and staff. Along with these various items you can purchase, there is a town area that contains adventurers, looking to spend all of their money at the shops. Each day, there is a Daily Bulletin card, which will change the way the day is played — it can give you an advantage or take the amount of money you can earn and knock it down a few coins, but this daily bulletin does affect everyone. 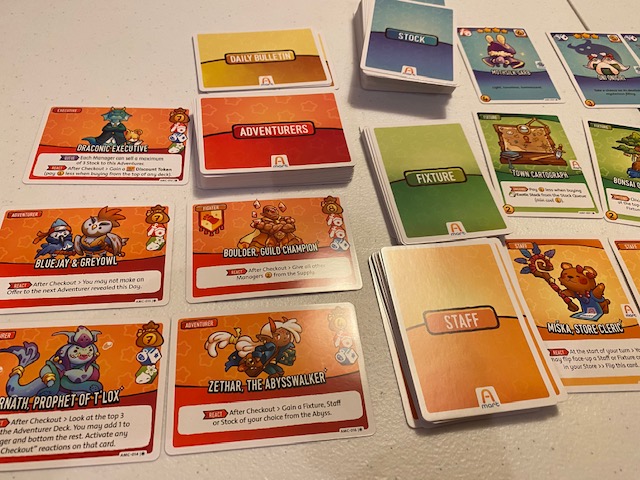 Stock cards are the main card that you are continuing to play around with in Adventure Mart. Each of these stock items have a price at the top, a quality rating in stars, a buy cost at the bottom of the card, an effect that will happen when the card is played, a brand, and a stock type. Various adventurers have a stock type that they want to be sold (some having more than one) and you will need to sell the stock that does match them. Brands matter more at the end of the game, where you can get bonuses for being brand loyal in your shop.

On your turn, you can purchase stock to go into your storeroom (face-down deck) using the buying cost, in hopes of expanding your products and selling them on later. You will need to be careful how much you purchase, however, as you will be shuffling them into a deck to draw from, so if you have too many cards, you might not be able to sell them off for more money later. 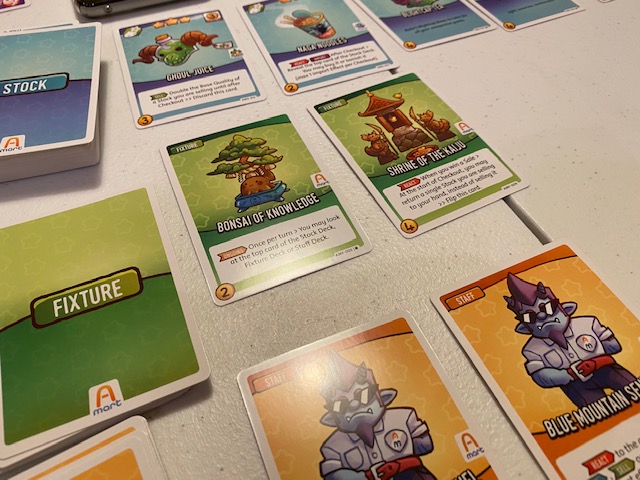 Fixtures are actually the hidden power in the game that I totally underestimated at the start. You see, these decorations have a bonus effect that can be used on easy days, so if you get a few strong ones added to your store right off the bat, these bonuses can really help your gameplay in later days. Some fixtures drop the price of other items to purchase, for example, which can be helpful.

Staff, on the other hand, I still do not see much value in. Bringing in staff will give you different skills, which you can use to your advantage, but they do cost some serious coins to hire, so you will need to decide if their action is worth it, as at the end of the day, you can re-hire them, but they do cost again to re-hire, unlike the fixtures which are one price that you pay once until the end of the game. 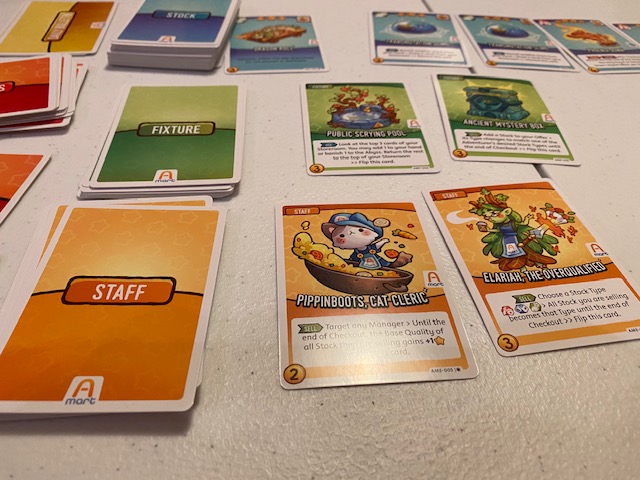 Now that we have talked a lot about running your shop, we should move onto actually selling to adventurers. As it turns out, these characters are not very loyal to your shop, and instead, work through bidding. When a player decides to sell to a customer, they will then put down the items they offer. The quality (shown in stars) of each item is added up, to show how much they want your items. Some adventurers want more than one type of stock while others have two of the same stock symbols. Having two of the same stock symbols will allow you to double the quality of stock in that category, while having more than one symbol will allow you to offer more types of items to them. When it comes to getting paid, however, you will need to keep an eye on their gold to spend. You can give customers more items then they can purchase, however, you will only get the gold to spend on their card, giving them the items for discounted rates.

When playing, as this is a bidding system, we found it a better strategy to allow other people to start the bidding, which will take up their move, then outbidding them to actually earn money while keeping your turn free for purchasing items or doing other tasks in your shop. As long as someone is sometimes going to pick customers, you can actually limit the amount of turns you spend on just activating them, and keep earning money anyway. 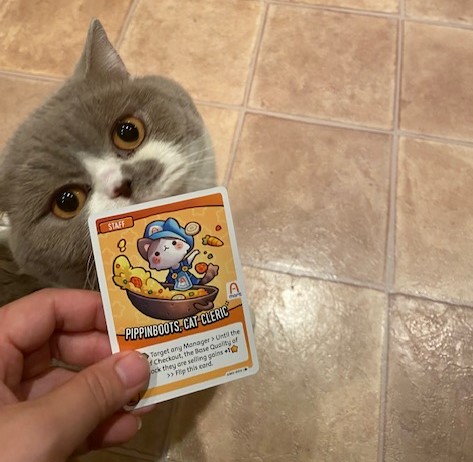 Once everyone has taken their turn, the day will end, and there is a lot of resetting of everything — making sure that the middle area is restocked, and starting again. Though, sometimes, adventurers are robbers and they try to steal from you, which can really throw a wrench in the works!

Adventure Mart is a really well made game, with some adorable cards and graphics, that brings a lot of strategy into a easy to pick up package. I enjoyed my time playing Adventure Mart, even though I never seem to actually win the game. I do wish that I had the lovely playmats that I saw in the demo of the game, but that’s really just because I love the game so much, having it organised is even more pleasing when it comes to the beautiful card designs and art.

You can find Adventure Mart on the developer, DigiSprite’s website.