Wonder Boy: The Dragons Trap has introduced another playable character, and she is, Wonder Girl.

Lizardcube’s Ben Fiquet gave details about the new character in a PlayStation Blog Post. The title, “Wonder Boy: The Dragons Trap (Wonder Boy 3) was originally released in 1989 and is being remastered by Lizardcube with DotEmu in tow publishing the title for a 2017 release. The remastered title features hand drawn 2D animations and a re-orchestrated soundtrack.

There have been teases about a new human hero design, but as Fiquet explains, they have only shown off half-animal playable characters so far, keeping the new hero design a secret. The new hero however is Wonder Girl, bearing a red cape, and purple hair, she comes in both a retro style and a new style that players can choose between viewing at anytime by flicking the “Retro Button” that changes the game from classic view to the new remastered view. 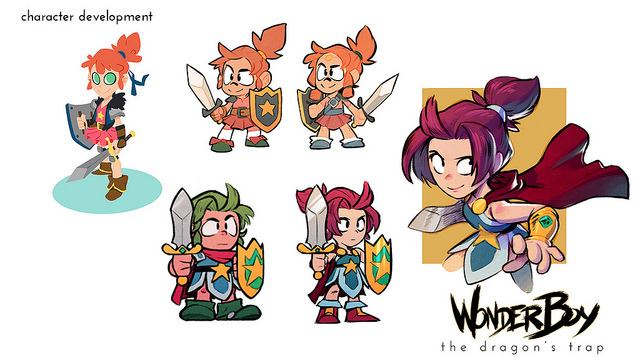 Wonder Boy: The Dragons Trap will be arriving on PS4, Xbox One, and the Nintendo Switch on April the 18th.