Most gamers will be aware of the fantastic Rockstar Games’ western; Red Dead Redemption II — but the story of Arthur Morgan and his gang wasn’t the only wild west tale to be told in 2018. Around the same time, board game fans were doffing their ten-gallon hats to Kolossal Games Western Legends — a game it has taken me almost three years to wrangle a copy of.

Western Legends is one of the most varied games that I’ve played since, probably ever. The objective of the game is simply to earn the most Legendary Points before the game ends.. However, in doing this, the players may choose to follow either a life of crime (or to become a Marshal) or they may simply choose to live a mundane life of poker, prospecting and cavorting at the saloon. 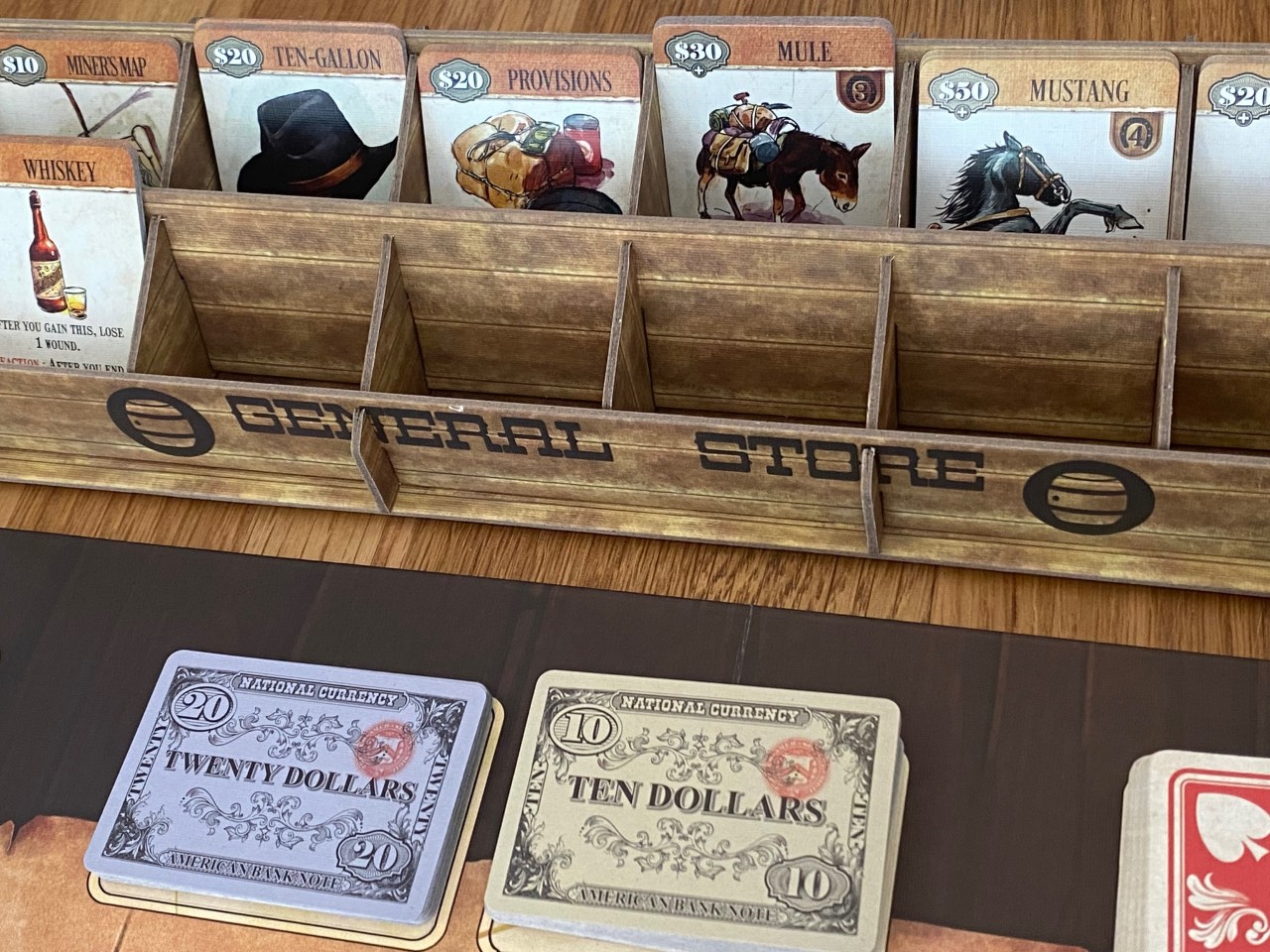 Whatever path you choose, Western Legends is a game that tells stories really, really well. Each player begins by drafting two characters and choosing one, with many famous faces including Bass Reeves, Annie Oakley, Doc Holliday and Bloody Knife among them. Each of these comes complete with four personal quests that might guide their path. These missions are optional, but I felt that the added direction and theme they provide is almost invaluable.

Every character has a number of setup conditions — Billy the Kid begins as a wanted man, whilst Bass Reeves is already an established Sheriff. Doc Holliday has no alignment, but he begins with a lot of money and a single wound — thankfully, he starts at the doctor’s house and can heal himself straight away. 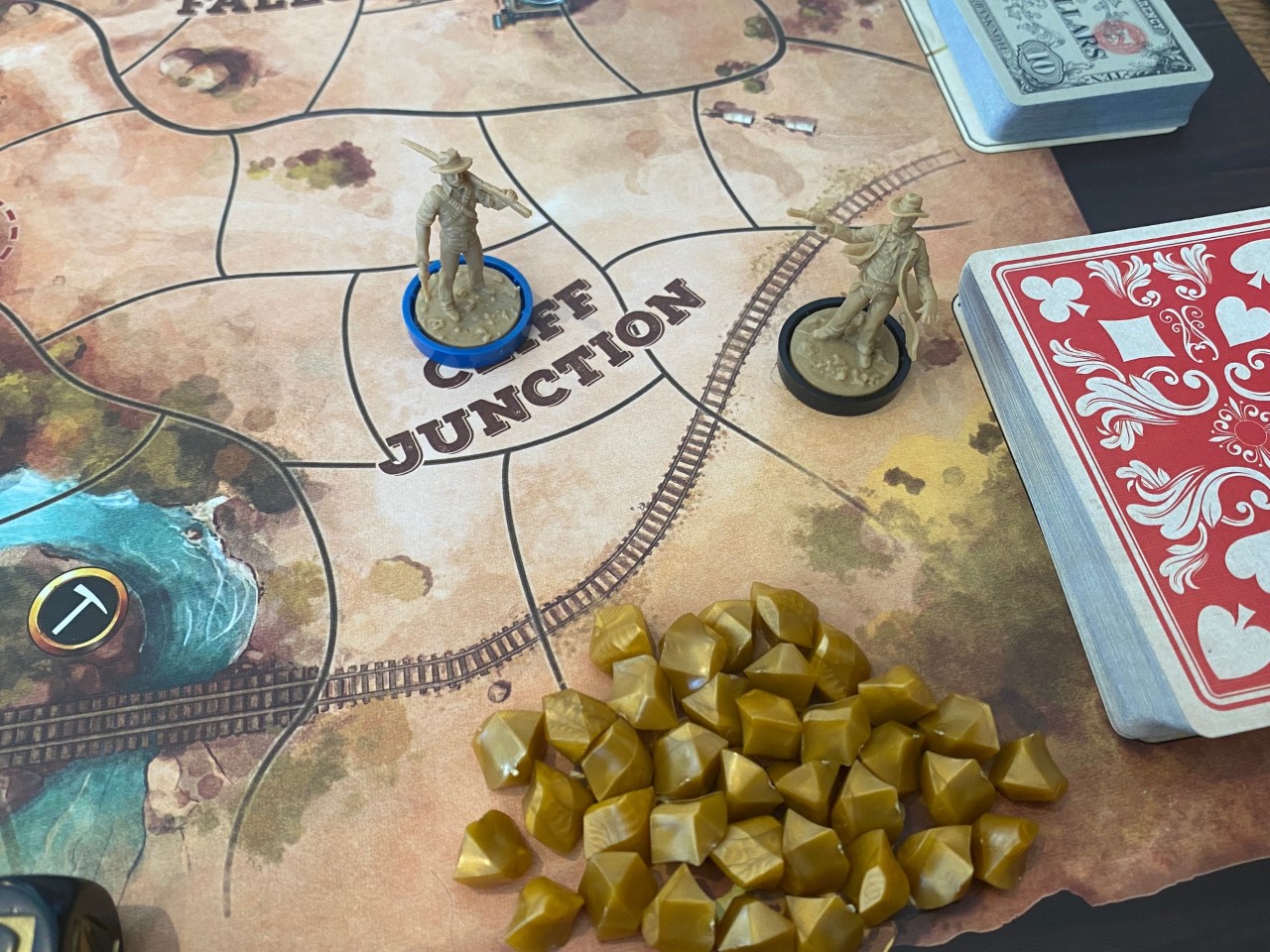 The most wanted character always begins the game (with other wanted players advised to sit to their left) because among the many in-game actions, players aligned to the Marshal track can arrest them. It’s also possible to duel other players, or, if you are an outlaw (or want to become one) to rob them. There are even a few NPC’s to fight including bandits, bank guards (as part of a heist) or even the Sheriff himself.

Any fight will be resolved largely by playing poker cards, which Western Legends uses brilliantly to serve a number of different roles. For starters, the card value is the basic attack value in a fight, whilst some cards will have “Bonus” text written on them that affects the outcome. Other uses for these cards are “Actions” which literally do whatever they say, “Reactions” which trigger in response to certain situations and of course, for playing poker, which is one of the actions you can take in town to earn money, and potentially Legendary Points. 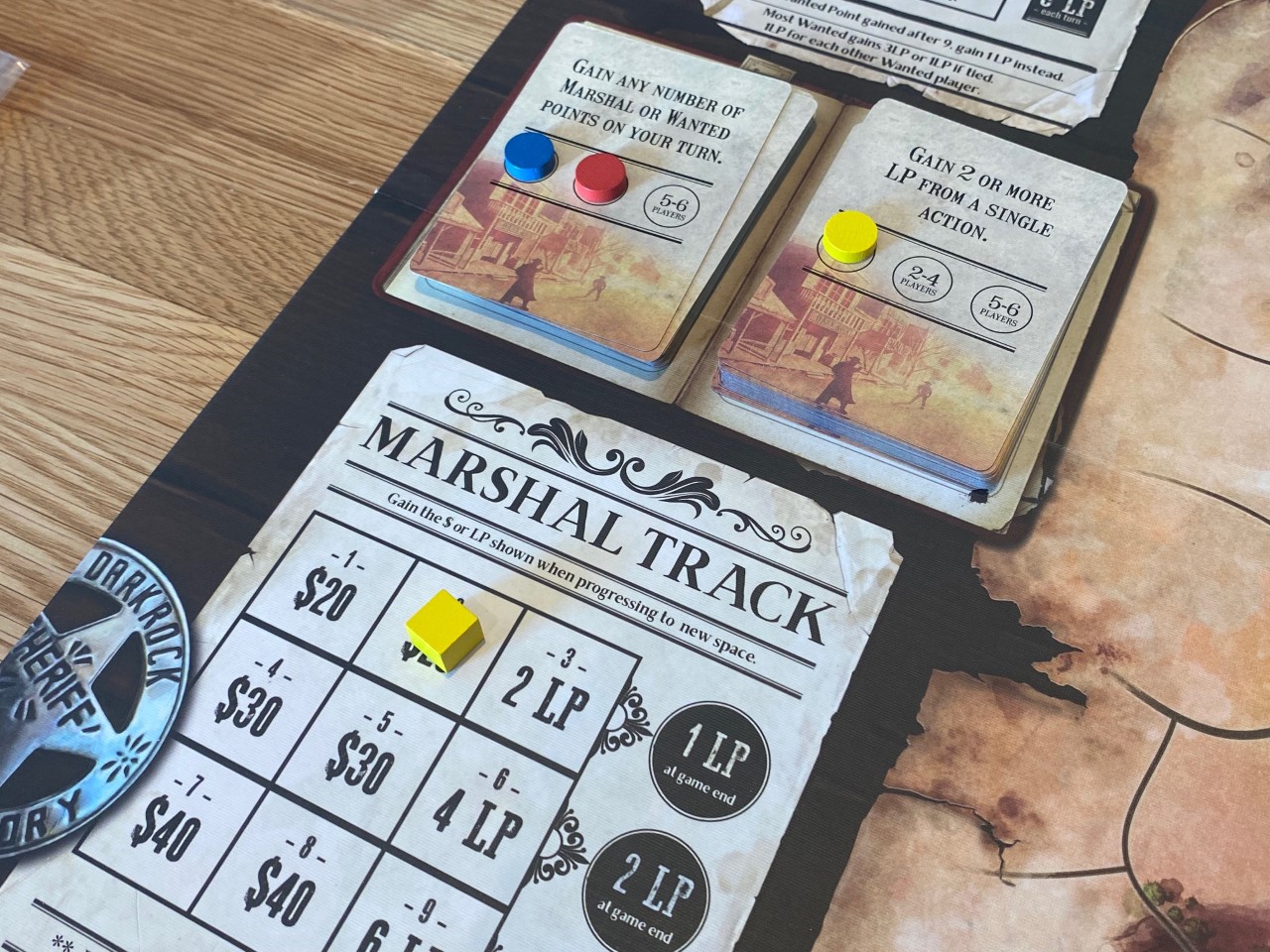 Money can be earned by prospecting for gold (and then selling it), rustling (naughty) or wrangling (nice) cattle, working, robbing, completing story cards or via a few other methods, and it can then be spent in the General Store. This emporium of useful cards is presented as a lovely three-dimensional display containing everything from horses and mules to various weapons and different provisions. Several of these items can be upgraded to earn LP at the end of the game.

Hopefully you’re now getting a sense of how Western Legends plays out. In a nutshell, each player will spend their three actions per turn to roam around the map expanding their funds and capabilities, advancing up the Wanted or Marshal tracks and undertaking whatever tasks will best suit them to earn LP. Sometimes, the act and the reward are immediate — such as robbing the bank — whilst on other occasions, it’s more about setting up the next thing. This can be true, for example, of the personal objective cards, or even the story cards that everyone in play can try and contribute towards. 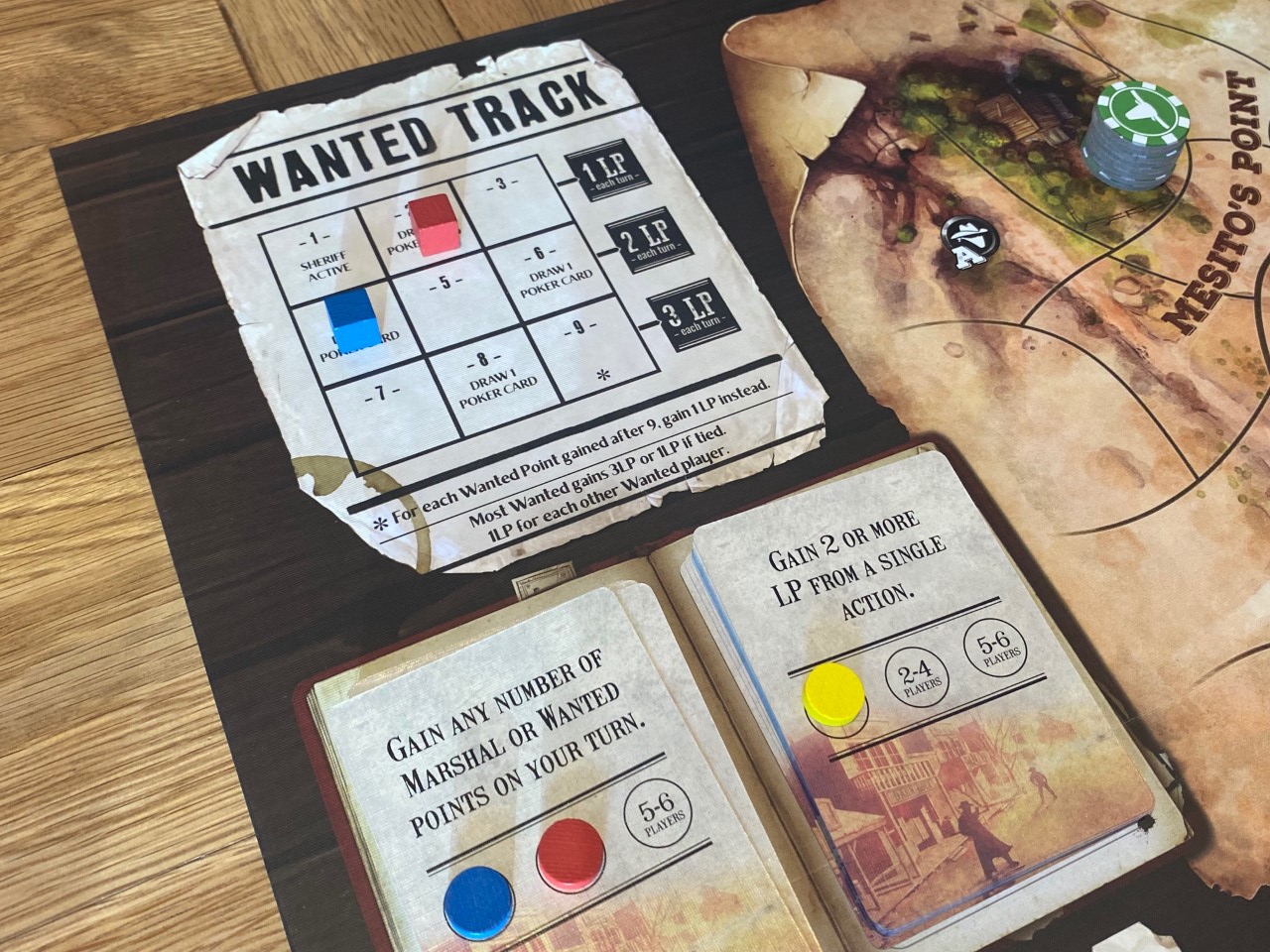 One really interesting aspect of Western Legends is the difference between being wanted and being a marshal. In short, if you are wanted then you will gain relatively few bonuses on the track itself, but you will gain between one and three LPs each turn based on your position. As a marshal, you’ll frequently be rewarded with cash or LP just for making progress — presumably because you are state funded.

The key thing to understand here is that if a marshal player ever takes an action that would give them wanted status, they immediately lose all their marshal points and cannot return to a law-abiding life until somehow clearing their name. That brings me to wanted players — a wanted player can be arrested by any marshal player (following a duel) and by the Sheriff, who is a very tough opponent. Upon being arrested, that player loses all their wanted points, any cattle and half their cash — which is punitive to say the least. 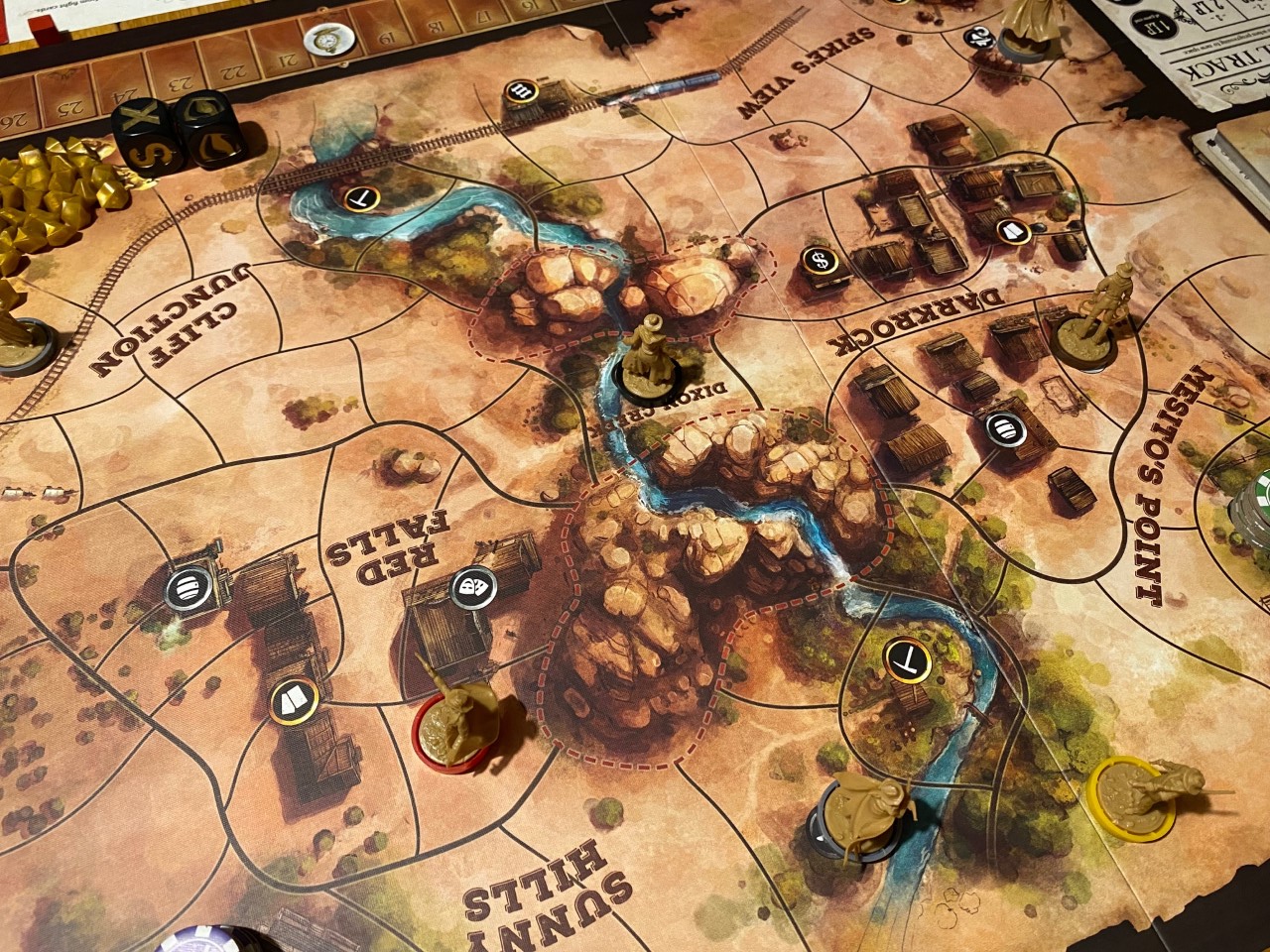 The point here is that living a life of crime feels appropriately risky. In the game we played where most of the pictures in this review came from, I won as Billy the Kid, having played a game that felt — almost all the way through — as though it was a disaster. I mentioned earlier that Western Legends tells stories — well in that game, Billy was arrested twice, lost repeatedly at poker, failed to rob the bank on several occasions and rode around on a mule because he couldn’t afford a horse. All of that happened before upon being arrested for the third time, he decided to go clean and deal with his own former gang-mates for a few extra LP during the last turn.

Western Legends isn’t brilliantly clever or groundbreaking in any way. It isn’t even very mechanically clean — with lots of fiddly rules and features to consider, thanks to how many things feature within it. Despite those flaws – if you can call them that, which is a bit of a stretch — it is stupendously good fun. There are loads of characters to choose from and with variants ranging from two to six players, no two games are even remotely the same. 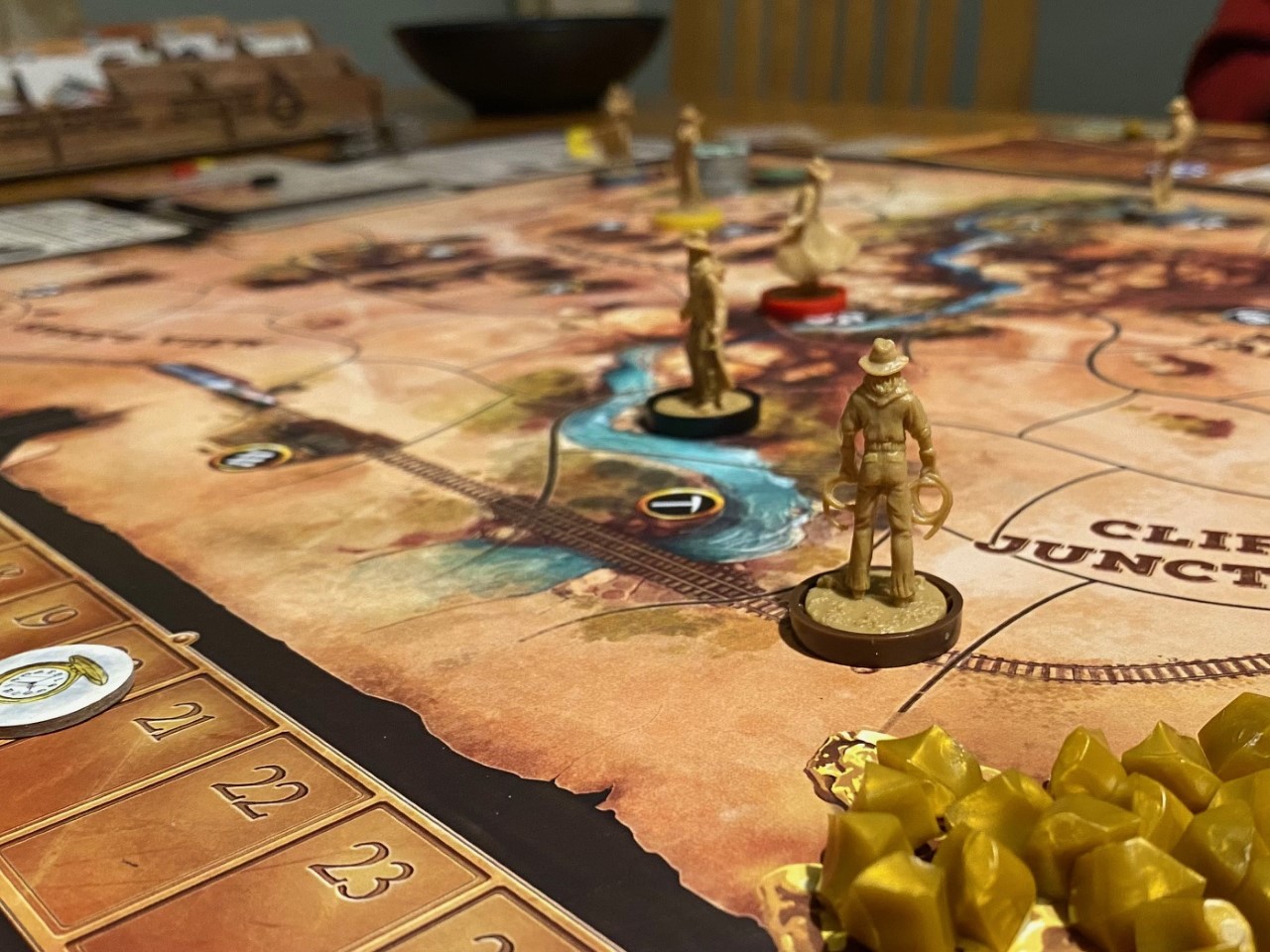 With Matagot’s excellent presentation, a ruleset that is mostly based on common sense (if occasionally polluted by the huge number of things going on) and a fantastically interactive play style, Western Legends is a brilliant addition to any gaming shelf. If you’re a fan of the wild west theme or just open world games with lots to do, Western Legends is among the best I’ve played.