Timberborn challenges you to build a beaver society in a post-human world.

The humans are either dead or gone and you won’t be surprised to hear that they went out with a bang. In a world littered with the ruins of humanity and the dry wastes that used to be plentiful plains, Timberborn is about beavers giving civilization a shot, featuring all the quirks and dangers of a colony-builder, but with cute, furry, semi-aquatic rodents.

It’s been hard to miss Timberborn over the last month, with it quickly becoming a popular phenomenon after its early access launch. There are more than a few reasons why it has done well, although the adorable characters are definitely a major factor. If you’ve played many city-builder or colony-builder games then you’ll already be familiar with the ‘supply system’ style gameplay that dominates Timberborn, but there’s much more at play. For a start, both of the currently included (the game is in Early Access at the moment) factions, and indeed probably most future ones, have unique buildings and mechanics. Perhaps most important though, it plays with verticality in a way that has never been done to this level before. 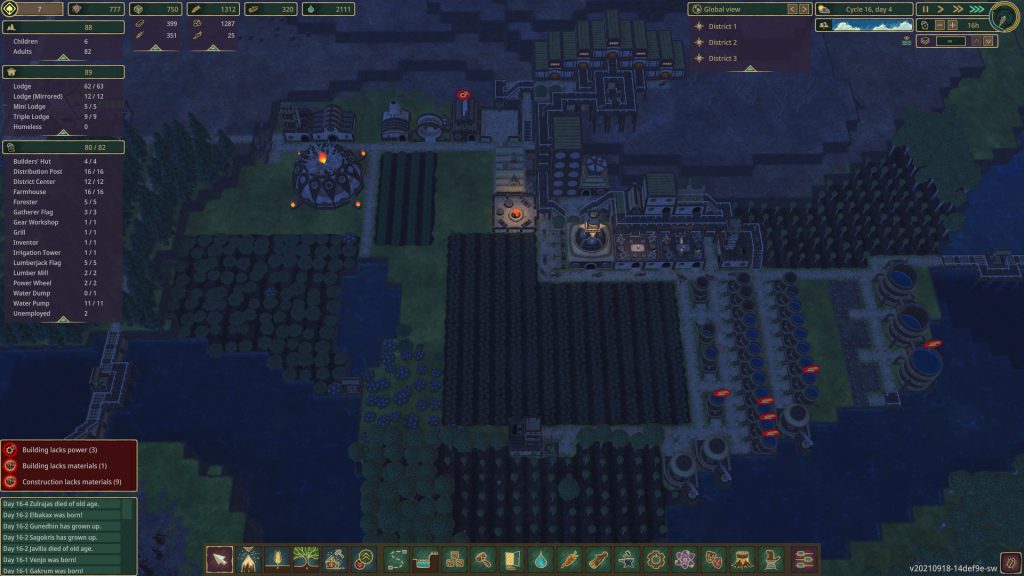 Beavers build dams, that’s one of the first things people learn about them (other than the goofy teeth and their notable tail), so it makes perfect sense that they’re adapted from incidental builders into industrious ones for the game. This doesn’t just take the form of building dams and levees though. You’ll very quickly be growing corn, then planting new trees, turning logs to lumber and, ultimately, you’ll be scavenging the ruins of humanity to refine the ruined scaffolding into metal.

As Timberborn currently stands there’s more than enough to do, but any given map does start grinding to a halt after a handful of hours. Naturally, an element of it depends on your playstyle though. Within a few hours, I had three independent districts up and running, each relatively specialised, with them using trading posts to top up each other and also to support groups of beavers who I then moved up and downstream to build additional dams. Early droughts last an in-game day or two, but within a few hours they wind up being 7-9 days long. That, however, is the extent of it, and cleverly setting up strings of dams and levees can create pockets of water that you can move around to keep crops fresh if you don’t want to go down the irrigation or explosives route.

The reason this works though is because of the verticality that I mentioned earlier, that and a pretty solid water simulation system. If you build up a dam wrong then the water level will increase until it finds a way to flow through — which can create major problems nearby, and definitely further downstream. When things go wrong, the drought can actually be a boon as you can get workers in to build up the dry riverbeds. You can build multiple lanes of adjustable water gates, using them to artificially tweak water levels, creating reservoirs and reserves. 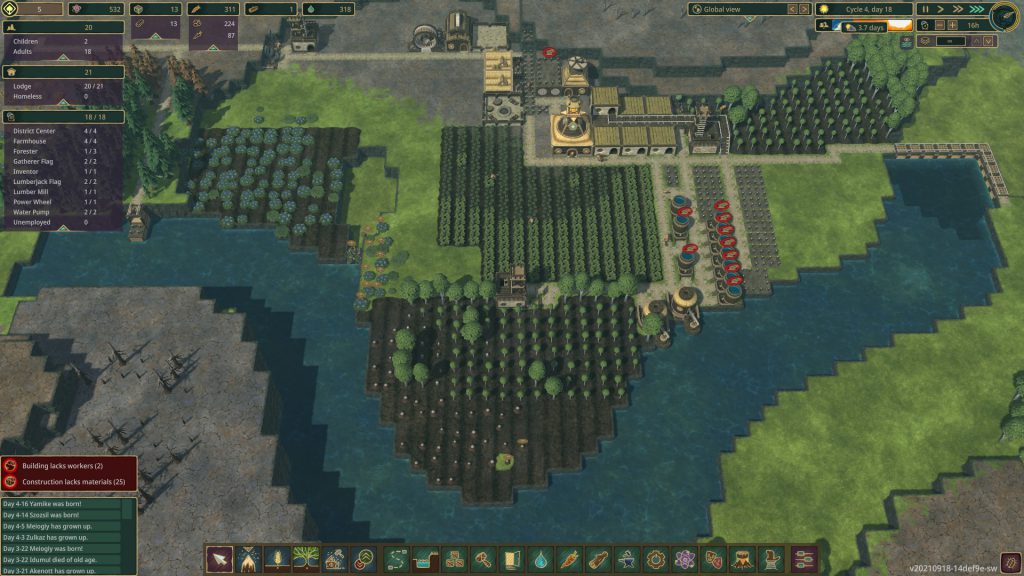 Then, if you wish, you can swamp those dams and constructs with houses, farmsteads, storage and more. In fact, the only reason that you can’t simply live on platforms over the water is that you need timber from the trees, and you need food from farms or berry bushes. That’s a strangeness, of course, there are no fish in the world of Timberborn; In fact, bees aside, there are no creatures other than beavers. Maybe in time, we’ll see predators, prey, or just other types of wildlife making their way in; marauding badgers or bears could certainly liven up the midgame, although they’d need their own ways to survive against the droughts. Maybe that would work, after all, it is a game all about production lines.

For those who haven’t been dabbling in the colony simulator genre of late, the vast majority of it comes down to juggling low levels of resources until they are stable enough to start moving onto the next resource. In the case of Timberborn, it’s water, food and logs that’ll be your baseline. If you don’t get yourself set up properly then you’ll quickly find yourself a caretaker of a skeleton colony, with the beavers either starved or dehydrated to death. It can happen quickly, a couple of days, and so you’ve only got a few cycles until you’re in danger of having your ambitions fully crushed. There’s something else at play though, and that’s actual population control. If you’ve played Banished, The Settlers, or even games like Rimworld or Prison Architect then you’ll know the danger of overpopulation: You can quickly strip all of your reserves down to nil. However, you actually have a decent amount of control over the population here, in the case of both factions, with buildings directly supporting greater population numbers you can quickly solve homelessness, or short-staffed buildings, by plopping down a few houses and waiting a couple of days. It means that overconfidence or lack of preparation ahead of droughts is the biggest threat. 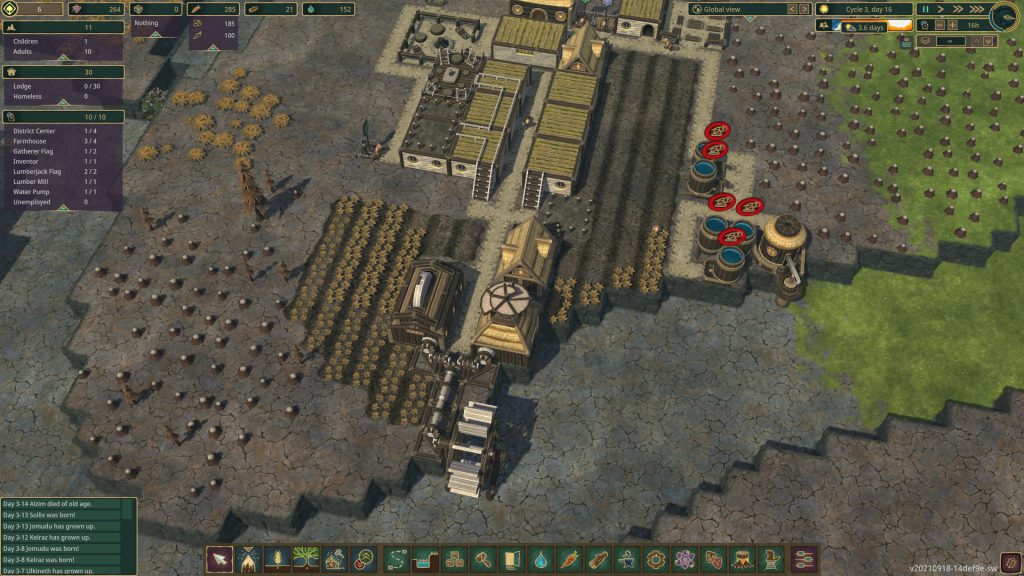 Housing, in the case of the Folktails (the first faction), is perhaps the best example of the real, stand-out element of Timberborn. Verticality. It’s something we normally celebrate in shooters or platformers, but it really sings here. Certain buildings, like platforms, houses and storage are ‘solid’ and can be built on top of. This means that you can create weaves of platforms and paths to create walkways around stacks of houses and warehouses, weaving them around mountains, or even levees. It’s when the game starts to really come into its own and considering the restrictions on spreading out a district too much — due to the space required to farm, as well as grow new trees and store water — it’s essential to start experimenting with it, and unlocking platforms, as soon as possible.

The district system is a smart way to manage things, however, it’s mandatory as you start expanding. You’ll find that, suddenly, you’ll put something down just outside the periphery of the border, and — if that happens at an inopportune time — that can really shake things up. You can, by clicking on a district, see how far the district stretches through an overlay, and similarly, there are a few ways that you can view the resources by district, but hopefully, future updates will bring overlays that show foot traffic, district outlines and maybe even things like unemployed or homeless beavers through highlighting. 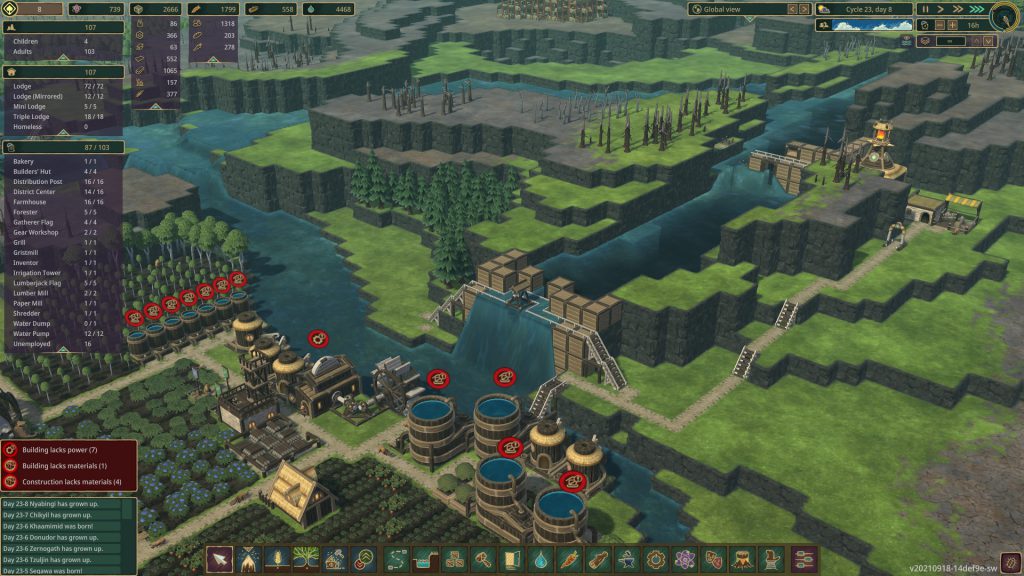 Timberborn is already a very well-made colony-simulator/city-builder. Few games have given me the feeling that I felt as I pulled off a new dam design, or as I noticed that trees had repopulated large strips of the world due to the new waterways that I’d created. I’m excited to see future factions, mechanics, tweaks and updates, and to give the map creator tool a decent go.

Timberborn is available for PC and Mac.

Disclosure: It turns out that one of our writers, Jon, contributed to Timberborn. (No wonder it’s so good)