The idea of taking a classic game and remaking it isn’t new in either video games or board games, but few games have had the amount of makeovers as Aintoine Bauza’s 2010 classic, Hanabi. This cooperative game about making a wonderful fireworks display has been reprinted by more than twenty different publishers, and the “Versions” section for it on BoardGameGeek is more than four pages long. All that said, I’d never played a physical version (Hanabi also features on BoardGameArena) until Coiledspring asked me to look at their latest version — Hanabi Deluxe: What a Show!

Based on my research, Hanabi deluxe editions (of which there are several) generally feature the same base game every time, with most experimenting with different components, rather than changing the rules of play. Hanabi Deluxe: What a Show! surprised me at first glance, because the components — whilst quite lovely — seem quite restrained by comparison to some other versions. The firework cards are long, slender cards (rather than dominoes or chits) and the plastic card stands are more necessary than excessive. The only hint of opulence comes from the clue bag — which is functionally worthless in the game itself.

What Hanabi Deluxe: What a Show! does that I haven’t seen commonly elsewhere, is include three expansion modules. These include two new colours of firework card — black and multi-coloured — and a set of chips that give bonuses when in game conditions are met. I’ll talk about how these play once I’ve walked through the base game in a bit more detail, but broadly speaking, playing with the new cards makes things harder, whilst playing with the bonus chips make the game slightly easier. 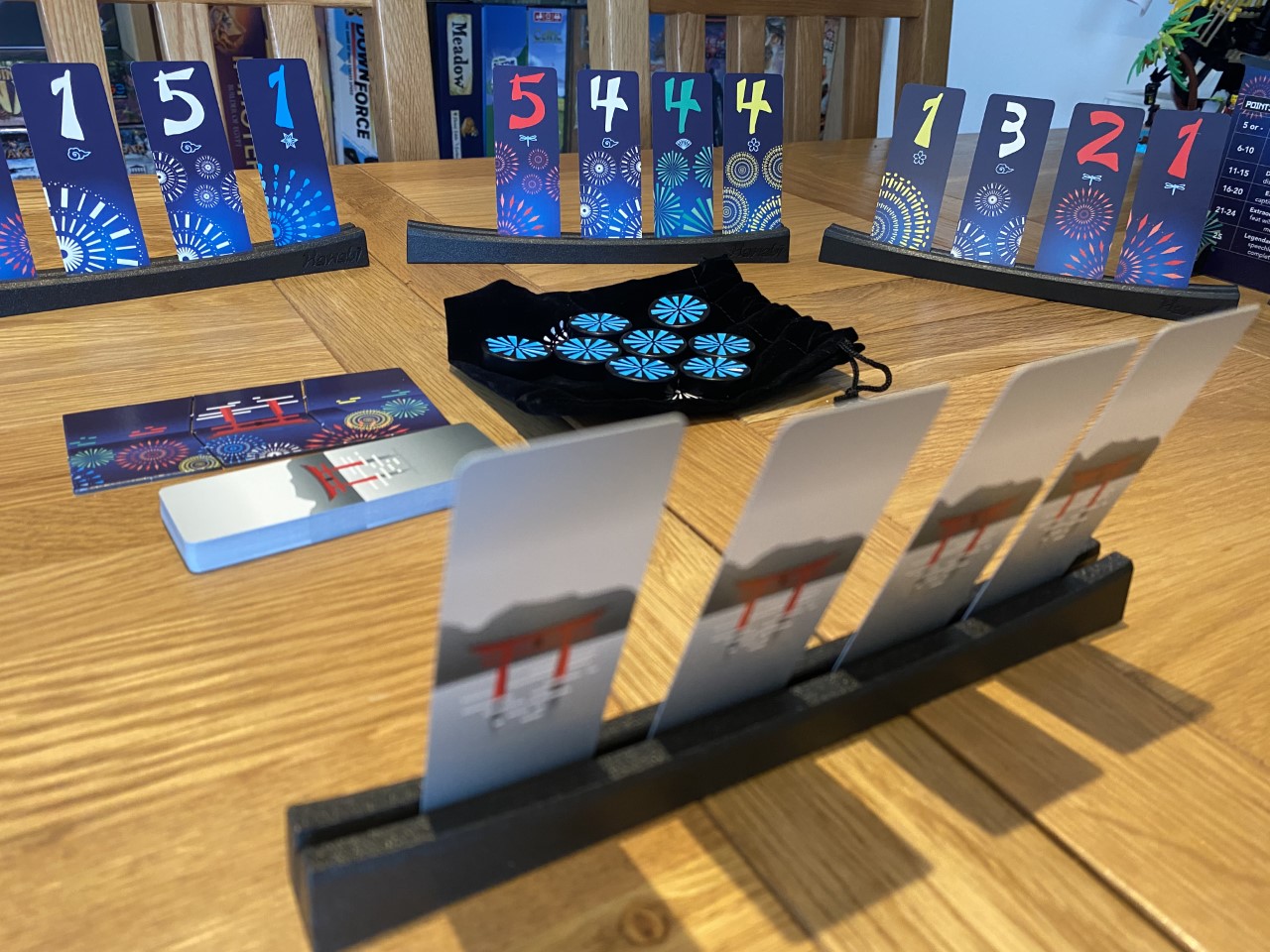 In terms of what you’ll do in any game of Hanabi (including Hanabi Deluxe: What a Show!) the rules couldn’t be much more straightforward. The players (two to five of them) must simply try and join up firework cards in five different colours and in numerical order from left to right, with each colour sequence beginning with a one and ending in a five. The trick in Hanabi is that no player can see their own cards — only those of other players — and no doubt it goes without saying, but you can’t openly discuss the cards. Collectively, the players can only fail to place the correct card three times before their display fizzles out, and at that point they score based on how many cards have been successfully placed.

To explain how this works, let me walk you through a turn. The active player can choose one of three options — Give Information, Discard a Card or Play a Card. To Give Information, the player takes one clue off the bag (to show it has been used) and then tells any one team mate a piece of information about one colour, or one number. For example “you have two green cards — here and here” whilst pointing at the green cards or “you have three number one cards, here, there and there.” The player receiving that information is then responsible for remembering it — and whilst they can rearrange their cards accordingly, they still don’t get to look at them.

The next choice of action — to discard a card — can be risky, but it is always rewarding. If you choose to do this, you’ll pick a card and then place it face up beside the bag — next to any other discarded cards so that all can be seen — and then you’ll put a clue token back onto the bag, and draw a new card. Whilst you will usually need to do this a few times per game, the risk is that if you discard a card that you need to complete a firework chain, your potential maximum score will be capped at whatever point in the chain you cannot pass beyond. There is only one number five card in each colour in the whole set, for example, so if you discard that, you will score a maximum of four in that colour. 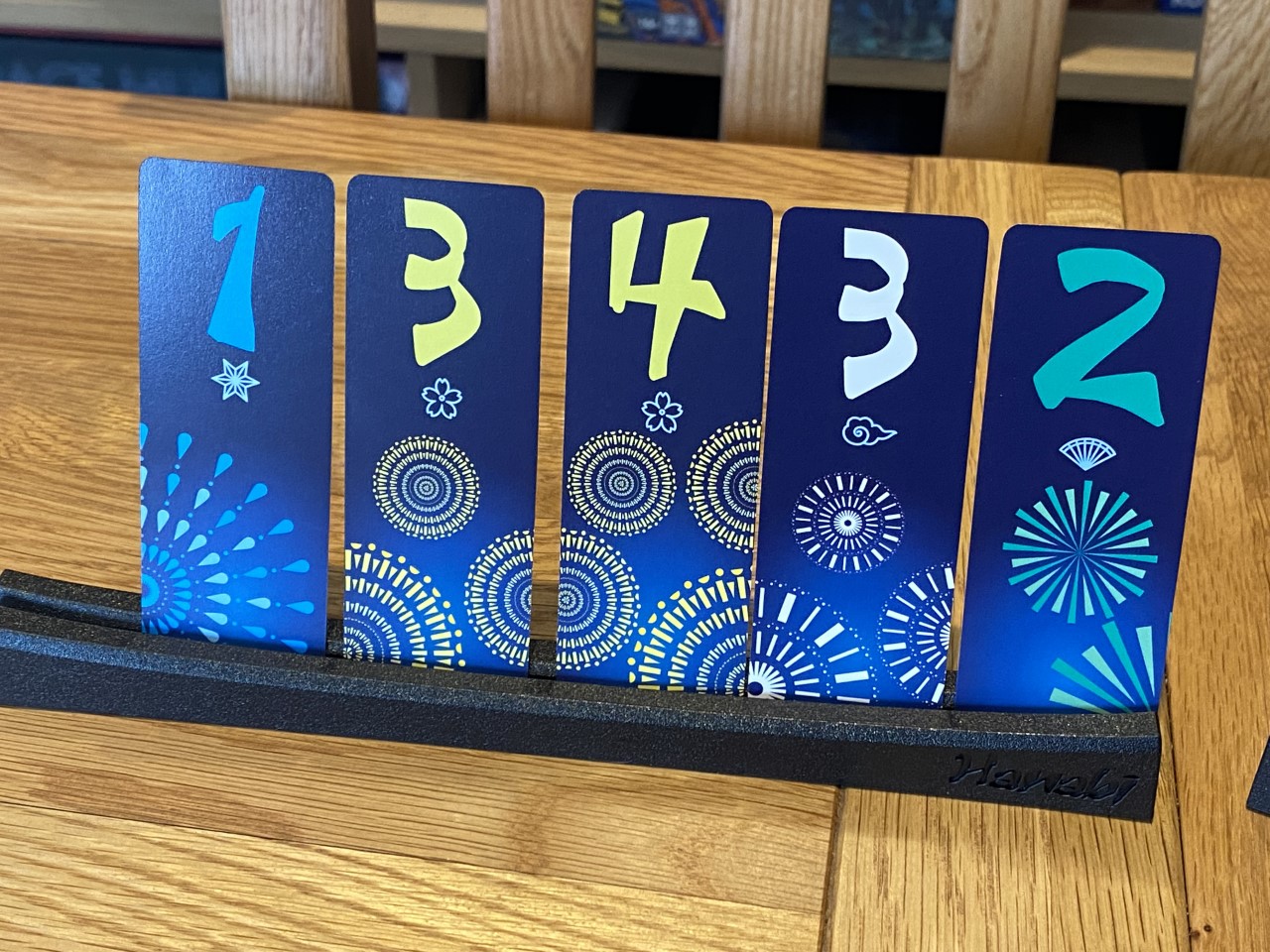 The final choice, and undoubtedly the most exciting, is that of playing a card. When this happens everyone at the table falls silent to see if their hard work (in providing clues) has paid off. The player simply chooses one card and places it face up to see if it either starts, joins or completes any firework display. If it does, it is placed accordingly, everyone breathes again and the player draws a new card. If it does not fit, then the player still draws a card, but one of the error cards is flipped (which will end the game, if it’s the third one.)

Now just to set expectations, all version of Hanabi (including Hanabi Deluxe: What a Show!) are very hard to finish. When I say finish, I mean, to get every single card in every single colour out. The challenges of Solitaire are here in terms of drawing the right card at the right time, but you also have several brains trying to work in sync, lots of hidden information, and no matter how hard you try, almost every game involves someone either discarding or playing a card with only partial information. The good news is that every score has a rating according to the game, so there’s always something to aspire to, and as a result, second or third plays are not at all unheard of at my table.

Now, should you be feeling particularly masochistic, you can include the new black cards. These work in the exact opposite way to the other colours, and must be played in descending order from five down to one. This means that guessing at card placement with only half the info you need can often result in disaster when these cards are in the deck. To make matters worse, these cards don’t add to your score (so the limit is still 25) and instead, you deduct one point for each black card missing — sigh. 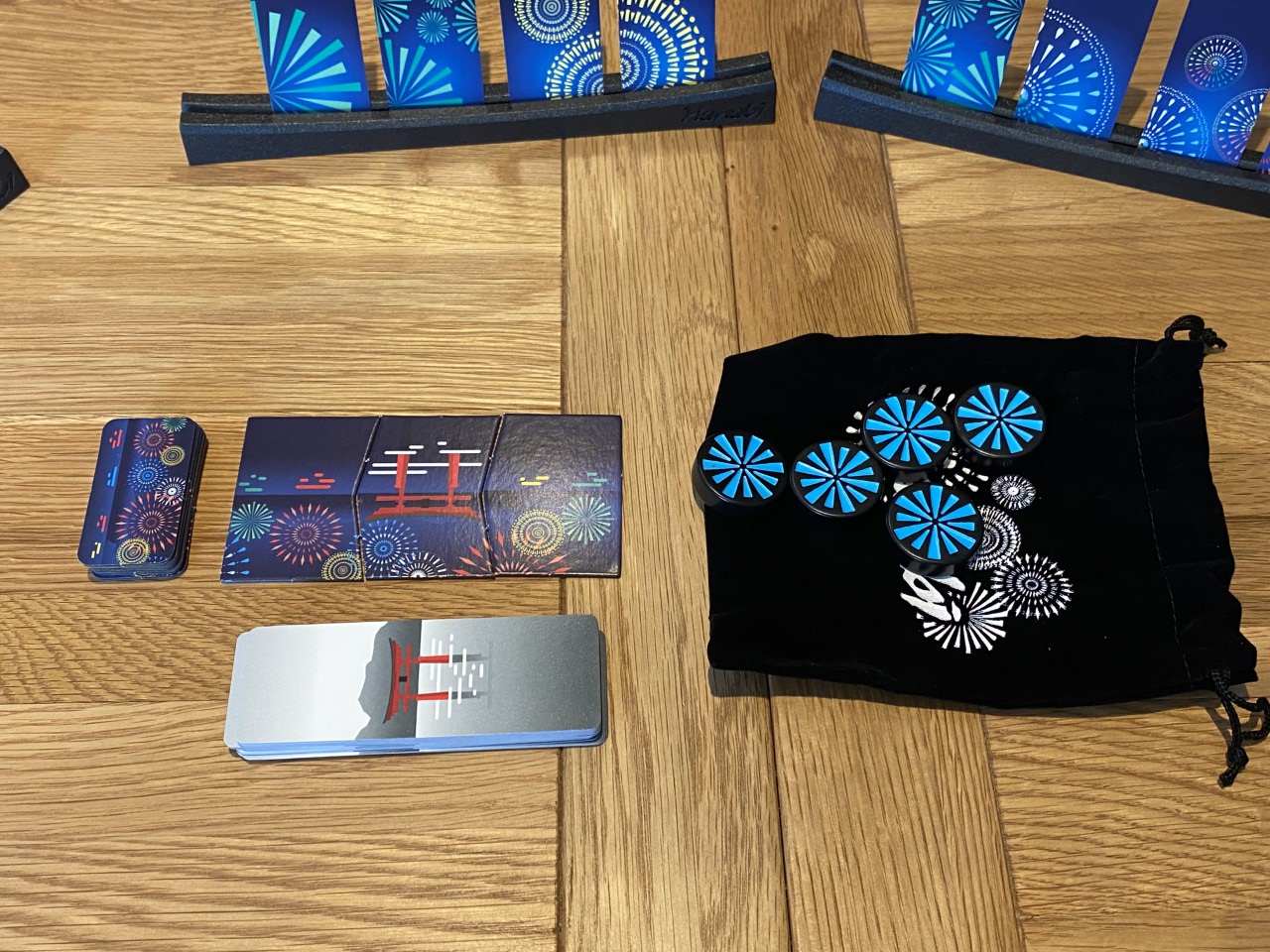 The multi-coloured or “rainbow” cards (as my daughter calls them) are slightly different. These count as another row that does score (so the max score becomes 30), but don’t have a distinct colour clue of their own. So now, if you were to give someone a colour clue, you must include the multi-coloured cards in your count, but you can’t make any reference to the multi-coloured card being multi-coloured. It is simply yellow, green, blue (or whatever) for the purpose of clue giving, and therefore players need to be extra diligent when they choose what to discard or play.

As an aside, I “house-ruled” a variant here that allowed multicolour cards to be used as subs for any card of the same value, and no sixth row was used. This made the game a fair bit easier for the kids, as they simply couldn’t get their heads around the more complex clues in the proper variant. The final official expansion is that of the bonus chips — called the Flamboyants Add-On in the manual. This simply allows the players to take a bonus effect and apply it when a five card is placed in the display — it’s a small change, but the bonus is slightly better on some occasions than the standard game, which awards a clue token for each five placed.

Honestly, for me, Hanabi is pretty much an essential addition to almost any board game collection. The cooperative gameplay is inoffensive, fiendishly difficult and massively engaging, with every player focussed on both their own cards (and turn) and the actions of others at all times. With that said, Hanabi Deluxe: What a Show! is a really nice, inexpensive deluxe edition that includes some worthwhile upgrades — notably the card stands. If you’re in the market for a copy of this classic game, then you can’t go wrong with Hanabi Deluxe: What a Show!

You can find Hanabi Deluxe: What a Show on Amazon.