Do you like pinstripe suits? I used to – they’ve always been a staple of established fashion, and, well they’re what David Tennant’s Doctor wore on occasion. I’m not too keen on them anymore though, and it’s all down to Pinstripe.

Developed by a single man for 5 years, Pinstripe is an atmospheric platformer/puzzler game. Also worthy of note is the fact that it’s published by Armor Games – the (formerly) Flash game website.

In Pinstripe you must platform your way through a dark, twisted world to rescue your daughter, Bo, from the mysterious and supremely creepy Mr Pinstripe. There’s also puzzles, and while the puzzles are not too demanding on your grey matter, they are still pretty hard compared to most 2D platforming titles. Definitely worth stating, as we’re talking about the game’s genre, is the game’s jumping mechanic. It certainly took some time to get used to, both due to the loose, floating jumping, but also the fact that the background and platforms are sometimes hard to differentiate.

You take on the role of Teddy, a former vicar, with the journey beginning as the protagonist comes to, startled, on a train. They awake to find that someone has taken all of their possessions, and set some of the surroundings aflame. They investigate the burning train, at which point they come across the titular Mr Pinstripe; who offers Bo a balloon. As a respectable parent you usher her away from the haggard stranger. The balloon returns though – while you’re investigating the train further Bo is snatched away by it, and taken away by the titular villain to another dimension — and that’s how we end up in the, artistic, twisted world that you spend the game exploring.

The dimension that the game takes place in is actually more like a personal hell for the main character, not only due to their missing child, but also due to individuals, and memories, from their past appearing to populate it. The journey of the former minister is pockmarked with moments of interaction with these other, equally confused characters; albeit these live under the awful reign of the villain. 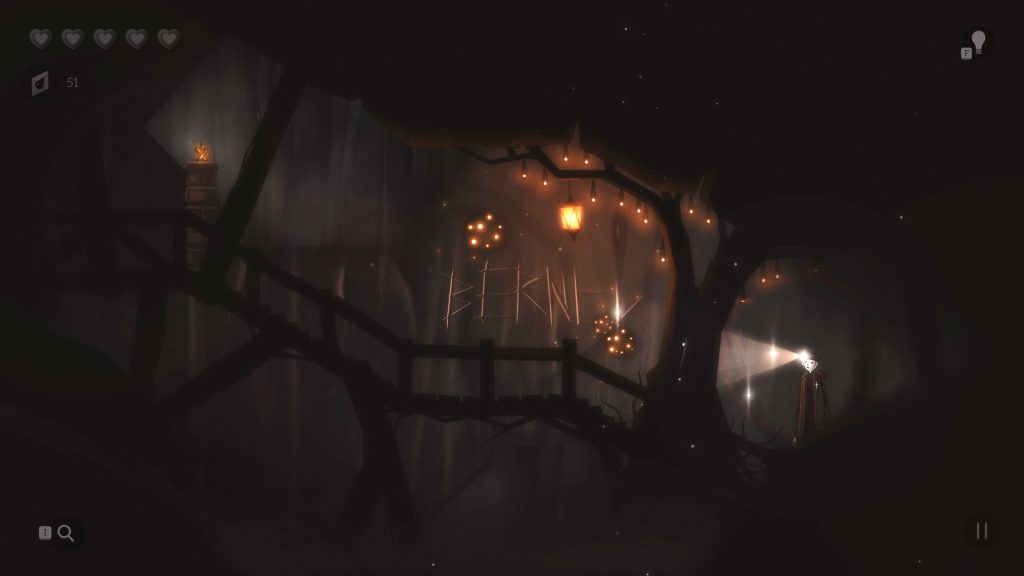 Hey, why can I hear ‘hall of the mountain king’ from up ahead?

Pinstripe seems to be working with a very simple motif, finding yourself when in difficult circumstances. Teddy must fight through personification of his own personal demons to become a better person and save himself and his daughter. While this is an extremely over-used trope, used hundreds of times in all kinds of media, Pinstripe has got to be one of the best implementations I have ever seen. (can you ‘implement’ a trope? One of life’s greatest mystery’s). Every design decision in Pinstripe is specifically made to build upon the trope of an unfulfilled father figure beating a demon to be a better father for his daughter.

As you progress through this personal hell, you acquire tools to help you along your way – as it is dangerous to go alone. To start you along your way, you find Bo’s little toy slingshot, which can help you solve puzzles by interacting with the environment and breaking boxes.

The puzzles are very enjoyable to solve and come in a variety of different flavours. Some simply requiring patient platforming efforts -like scaling a tree as thorns erupt from it’s trunk- others are simple box, and lever, puzzles. Others -however- are much more complex, many take place over multiple screens, taking a lot of planning and time to complete -metroidvania style- which is something I have a lot of appreciation for. 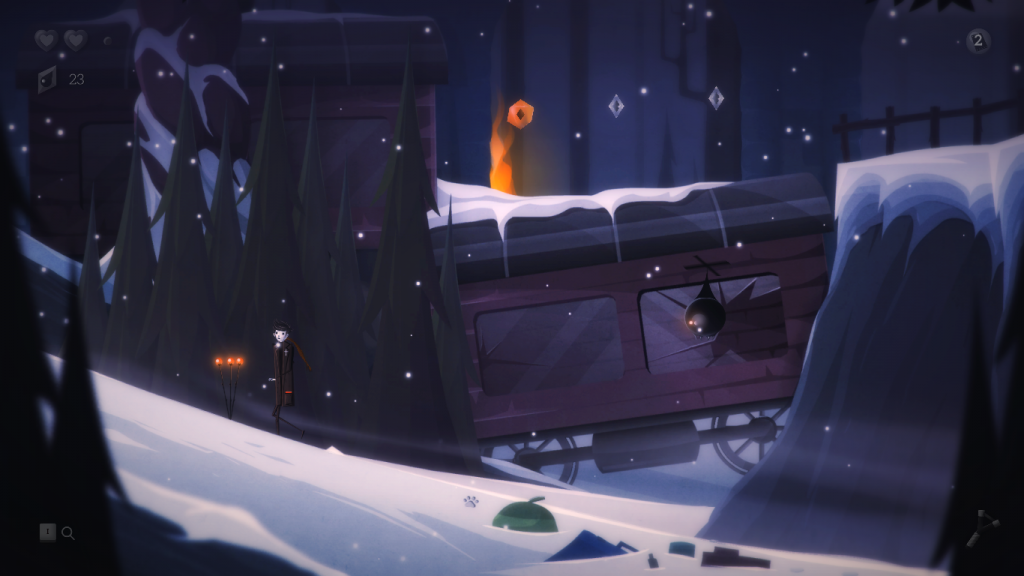 I’m being bullied by a flying black balloon, what even is life?

Along with the keys, and other various paraphernalia, that seem obligatory to puzzle games, there are also several collectables and other little secrets to be found; There are crystals scattered around, some in plain view to help guide you around, others hidden in pots and other secretive places; There are also ‘Mr Pinstripe’s film strips’ which feature Bo on the cover, so I’ll leave what they are to your imagination. these film strips require a lot of searching to find, and most would probably require a guide to find all of them, and the strange places they are tucked away within.

Atmos Games’ choice to use an almost hand-drawn look, was brilliant, it gives the game an endearing, storybook style that’s going to stick with me for some time. While I don’t want to sound like an art graduate -if just because I’m not one- the whole art aesthetic perfectly mirrors its narrative, melancholy and sadness with just a tiny glimpse of light. Sadly this style does work against it at times, for all of it’s beauty  -enough to work away at my hard exterior- it does get very hard to tell what things are, and if they can be interacted with.

That said, as a one-man effort this is an amazing achievement; and is a trend I really want to see emerge in the industry.

Pinstripe is a story wrapped up in a riddle, wrapped up in a mystery, inside an enigma. The story, mechanics and style are all really well done, and while it not be great for kids, or as a party game, it is a supremely good title, and one I highly recommend if you like games that make you think… and feel.