Slitherine have confirmed the release date for the upcoming Warhammer 40,000: Sanctus Reach; a turn based strategy take on the dark, destructive setting as crafted by developer Straylight Entertainment.

Sanctus Reach will launch on January 19th complete with two extensive story campaigns which follow the exploits of the Space Wolves as they fight against the innumerable Orks across Alaric Prime in a battle for the future of mankind.

I’ve included below a list of the features as of the game’s Steam Page, 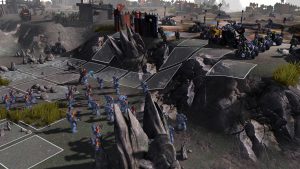 “• Lead either the Space Wolves Space Marines in the campaign or the green tide of the Orks in skirmish battles!
• Two campaigns: Stormclaw (over 20 missions and skirmishes!) and Hour of the Wolf (over 25 missions and skirmishes!)
• Play as the mighty Space Wolf heroes Krom Dragongaze, Ragnar Blackmane and their Jarl, the High King of Fenris, Logan Grimnar as well as the Ork Warbosses Grukk FaceRippa and Mogrok da Mangla
• 30 Space Wolf units from packs of Blood Claws to the fearsome Predator – And lead the legendary Imperial Knight Gerantius!
• 30 Ork Goff units including the formidable Gorkonaut!
• Unit experience level progression though campaigns which unlock new abilities and tactical options
• Generated skirmish maps on many different types of terrain and environment
• Addictive multiplayer modes using Slitherine’s online PBEM++ server and a ranking system”

I must say, I’m quite impressed with the visuals of the game. They’re not normally something I look for in my strategic titles, preferring solid gameplay and balance over visual flair – but the developers have done a great job with the detail on the units, and it’s a framework I hope can spread to further games.