Mega Man remains one of the most beloved classic video game franchises. Its main series — the one that started it all — continues to this day. Several third parties have also dipped into the nostalgia, with mixed results. One of these challengers is Venture Kid, developed by Snikkabo AS and published by FDG Entertainment.

Venture Kid tells the story of Andy, who lives on an island with his sister and uncle. One day, Teklov — an evil scientist who apparently has a criminal record — announces that he is going to build a giant space station for peacekeeping purposes. Our heroes suspect foul play and decide to stop him.

Thus begins Andy’s two-dimensional, side-scrolling journey. Initially, you are only equipped with a handgun your uncle made for you, as well as the emotional support of your sister, who otherwise has no purpose. Over the course of the game, you unlock various secondary powers and gain access to more of your uncle’s gadgets. 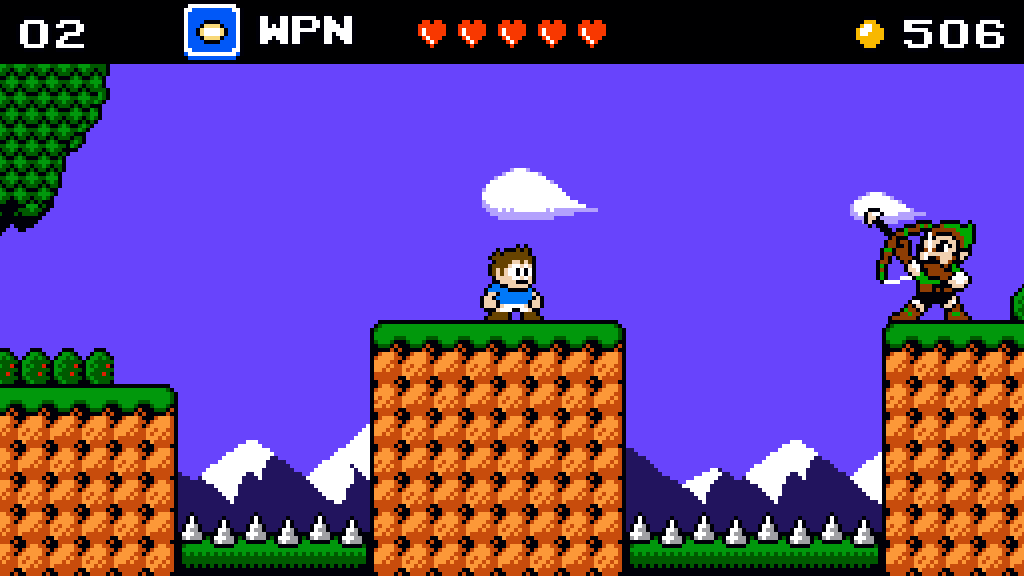 Your quest leads you through eight stages, culminating in another set. These stages have to be completed in order and they represent the most archetypal stages imaginable for a platformer from the eight-bit era: a forest, a desert, a city, a jungle, a volcano, an ice stage, a factory, and a castle. Each one has its own distinct enemies and hazards, though some of those are recycled in other stages. The deliberately pixelated stages are very colourful to look at and take as much inspiration from Alex Kidd as they do from Mega Man.

The stages have to be mastered primarily by running and shooting, for which Andy controls well and is faster than most enemies. Some of the enemies shoot projectiles of their own, but most merely move along the screen, hoping for some collision damage. Despite Andy’s relatively speedy movement, you can take your time. Venture Kid has no time limit, and a patient player can often pick off enemies from distance at no risk.

Even if you take the occasional hit, do not worry. Andy can absorb up to three hits before he sees his demise, with one hit point added or subtracted for the easy and hard difficulty modes. Health power-ups are scattered throughout the stages and sometimes randomly dropped by opponents. 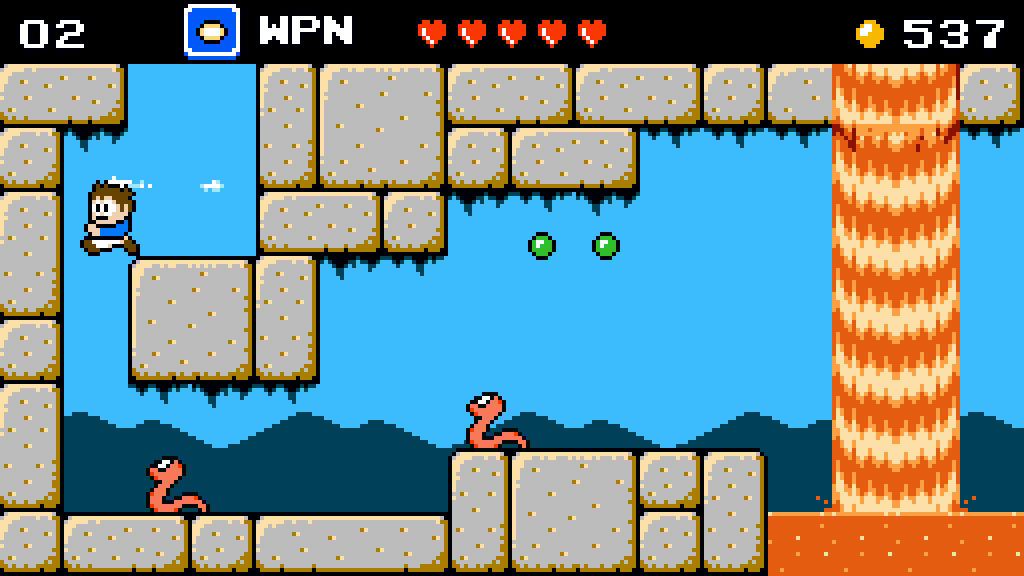 More of a challenge are the boss battles. A boss awaits at the end of each stage and has to be taken down, possessing a rather long health bar and comparably complex patterns. A checkpoint is placed before every boss, but once Andy runs out of extra lives, it is back to the beginning of the stage. Thankfully, the game saves your progress after every stage, game over or not.

Once you defeat a boss, your uncle rewards you with a new gadget. Some of these are weapons, some are tools and some are both. The usefulness of the secondary weapon varies quite a bit; the double jump and the spike-resistant shoes are life savers, whereas the rocket that attacks enemies at an angle has almost no application. 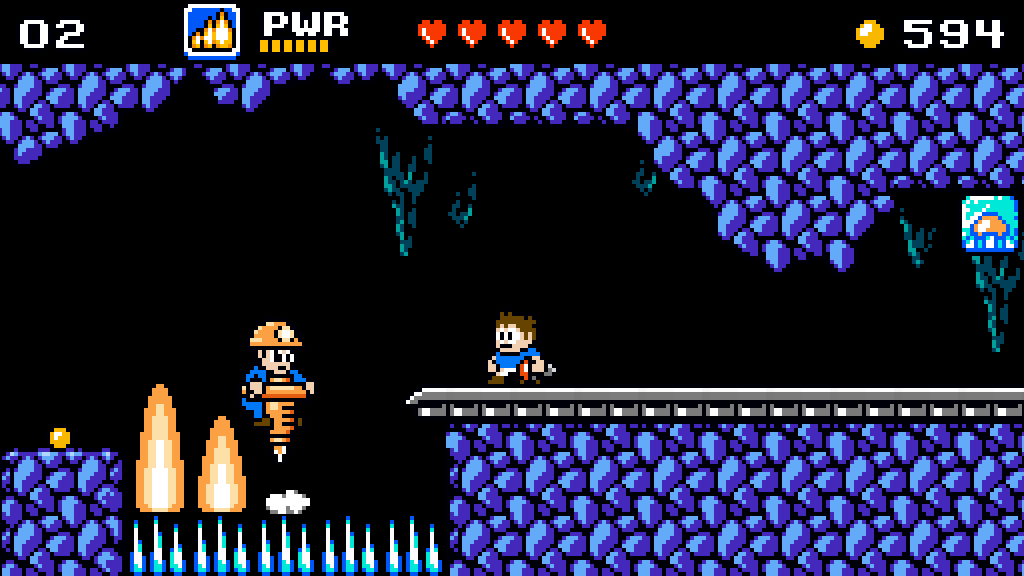 All secondary powers use energy, which is frequently dropped by enemies and can also be refilled with a special potion. However, most of the time, enemies drop orbs, which are also the most frequently found item. Orbs take the role of Mega Man screws and can be used to purchase items, including extra lives, a health bar extension, a health potion and an energy balancer that automatically distributes energy to the power with the lowest energy.

Equally true to Mega Man are Venture Kid’s instant death spikes. Andy may be able to survive several burning arrows to the chest, but whenever he comes vaguely close to spikes, his life is forfeit. This becomes evident in the factory (which, like all video game factories, manufactures only death and desperation) and the final set of space stages.

These levels are poorly balanced with the rest of the game, as are most of the bosses. Even for beginners, finishing a stage without a single death is not too difficult, but the bosses can drain your health within seconds. There is little time to observe their pattern, either — once you run out of lives, it is back to the beginning of the stage. 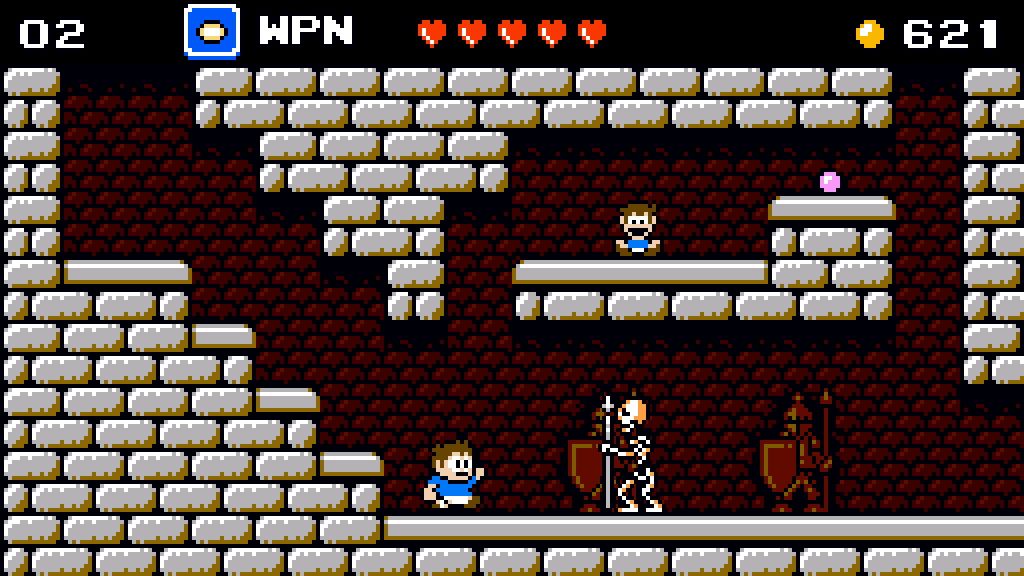 Completing a stage does not grant back your lives. As a result, it is often tactically preferable to jump into the next spike pit at the beginning of a new stage in order to get a game over and a new set of lives. While not a major design flaw, this adds to the frustration.

Due to the aforementioned lack of difficulty in most levels, this feels less like a challenge and more like play time being padded out. Especially punishing are the final stages, which are filled with bottomless pits, spikes and boss refights. Some rooms even contain laser death traps, which cannot be avoided without prior player knowledge.

For those who complete the game regardless, Venture Kid offers some additional challenges. There is a long list of achievements to gain, times challenges to complete and hidden trophies to find. Also worth mentioning is the game’s soundtrack, which is both fairly close to the era it takes inspiration from and very catchy. 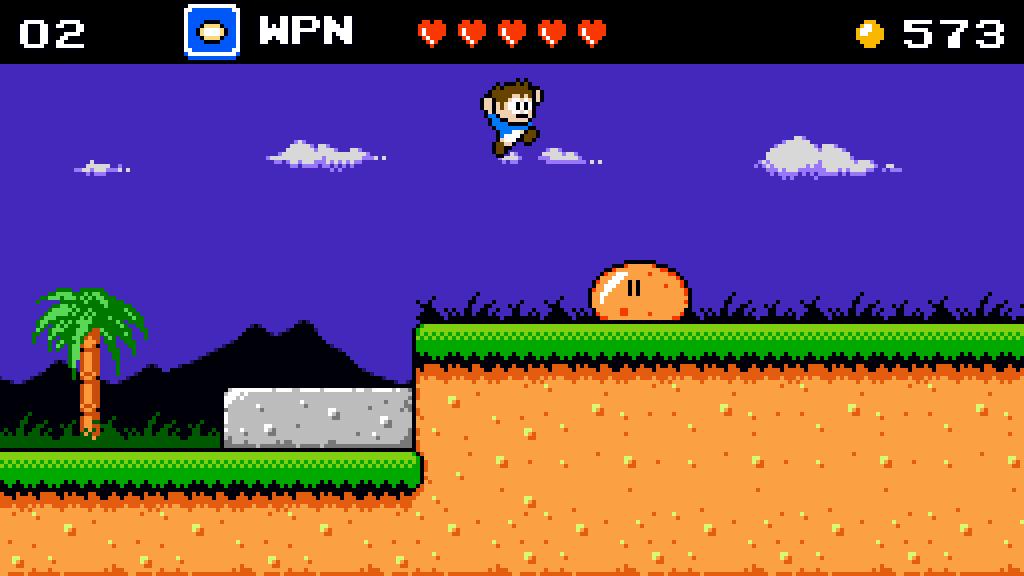 Overall, Venture Kid is a competently made homage to Mega Man and other platformers of its time. It is easily recognisable as such by long-term fans, while also being accessible to newcomers. Those who can overcome its balancing issues will find it to be an entertaining little game.