Vagrus: The Riven Realms — Exceptional writing and an unforgiving but rewarding nature

I’ve had a lot of trouble pulling myself away from Vagrus: The Riven Realms over the last couple of weeks. It’s a game that basks in and matches, its setting’s own complexities and harshness. The tale of people surviving in the ruins of a collapsed empire isn’t anything new, but Vagrus‘ world, Xeryn, is one that inverted itself when benevolent gods became belligerent gods, turning on the Empire for what it had become; Cursing, destroying, mutating, warping, perverting and crushing everything they could in a blind rage, all before they disappeared off, never to be seen again.

The Great Deluge, in many Western-born religions, was a reset. But, the Cataclysm of Vagrus wasn’t, it was a collapse. The biggest human nation was smashed into crumbs, many who crawled out from the ruins were turned into wraiths, tainted, mutants or worse. The humans shifted to worshipping new sinister, dark gods, perfectly fitting for the broken world that remained. The reason why humanity has thrived is that, unlike animals, we learned to change our environment rather than let it change us, but in Vagrus: The Riven Realms humans are more like cockroaches scratching through the rubble, and its difficulty reflects that too. Formerly glistening woodlands are now scorched wastes, and great lakes are deadly deserts, rivers of lava flow where cities used to stand, and the whole world is on edge, willing to bite you if you reach too far. I’ve had trouble writing up this article because I can’t stop playing it, even though I’m on my third or fourth caravan now. 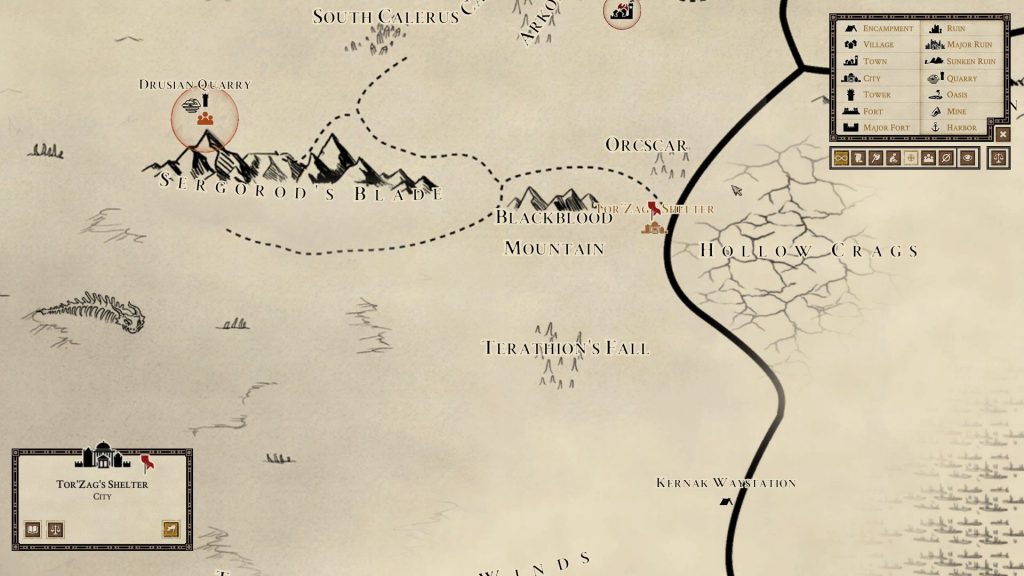 In addition to Vagrus: The Riven Realms I’ve been playing The Good Life for review, it’s a game where you idly wander around a sleepy magical village filled with rats, rabbits, birds and – as you’ll know if you know anything about the game – a lot of cats and dogs. Vagrus is exactly the opposite of that slice of life-style game, instead, there are giant killer bugs or rampaging former beasts of burden who can completely blindside your party in combat. Its world hates everything and so only the most tactful, or brutal survive. There’s even a type of combat where two larger collectives clash, in this you mainly opt forces in to fight, if you send out your hero/commander units and they’re just not good enough then they will simply keel over and die… that can be 15 hours after meeting them, hours after completing personal quests and carefully levelling them up to boost your caravan… you can’t afford to make stupid mistakes or rush ahead. This isn’t a complaint; we regularly see people praising the Souls games, Morrowind, Risen or The Witcher because they say ‘Come back when you are ready, not when you think you are ready’ and it’s the same here.

In fact, the only real layer of protection that you have here — beyond common sense and some small UI elements — is that the world’s reputation system does a great job of emulating a guild saying ‘Never heard of this lass, but she sure looks squishy, would be a waste of resources to hire her crew’. The rest of it is deep, interwoven and unforgiving. 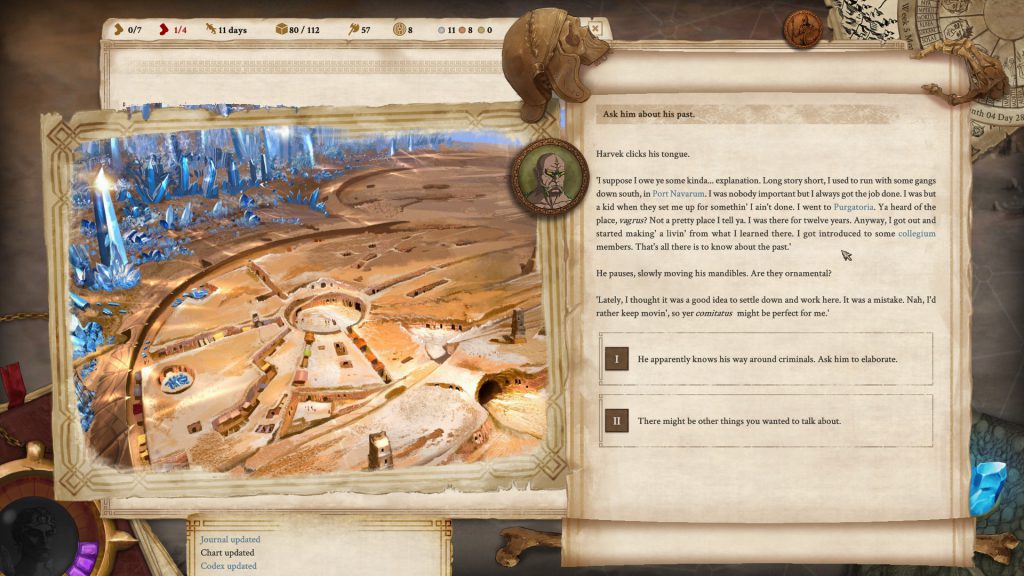 You can approach your time in Xeryn from two different starting points, with the first being a standalone story, ‘Pilgrims of the Wasteland’ which serves as a pretty tough tutorial, but does a great job of introducing a lot of features and mechanics. It covers squad and crew combat, trading, crew management, quests and a few other elements, including – perhaps critically – the advantages of building a party of companions. However, for every element that it does cover there’s something that you’ll have to learn to survive in the wastes once the story is done.

You’ll gradually learn that if you’re repeatedly travelling the same routes — between Lumen, Arken and Tor’Zag’s Shelter, for instance — there’s no point in having a full coin purse, as you’ll already know the trade good values and can earn a few extra coins travelling between places. You’ll learn that Vagrus: The Riven Realms is, as perhaps indicated by its origin as a Tabletop Pen & Paper game, best played as a party-based RPG. You’ll learn that there’s not really a way to thrive here, but you can survive well once you’ve built systems.

Those systems, while they take a while to get together, completely change the game. While there’s still trepidation while moving around, you can explore further, retooling and specialising your caravan as you play in order to explore the full extent of the (included) map. That said, the playable world doesn’t extend as large as the generous map, which, when I played, wasn’t made abundantly clear. Maybe we’ve been spoiled by maps like that of Mount & Blade 2, where you can explore every element, or games like The Elder Scrolls series, where the world has abundant lore, but the map is cropped to only show the region you are in. 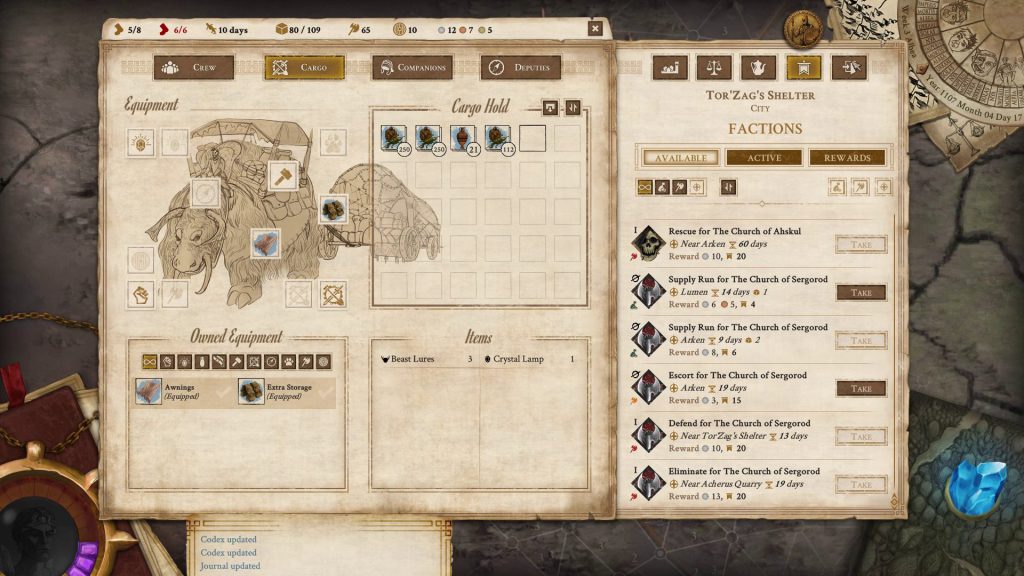 Tailoring your caravan based on your playstyle and current missions is the secret ingredient to survival. There’s a temptation to have dozens of slaves and workers, and equivalent guards to protect it, but travelling light with lots of beasts of burden is infinitely more beneficial, and if the roads are safe then there’s close to zero risk. You don’t need an army to deliver scrap from town to town, and the hidden costs of an expansive caravan are substantial — food can be scarce and scouts can only gain so much even if you have a bunch of them.

Once you’ve got that down though, and you start exploring further, that’s when it all opens up. I said that the game was like a party-based RPG earlier, while that’s apparent in the combat, it’s also clear in the cities as most cities and towns give tonnes of opportunities to explore their alleyways and find chaos or opportunity. It’s more than possible to enter a town with a clear task log and leave with a dozen things on your to do list, and once you’ve refined your caravan management skills you can make a fair bit from running resources for guilds, ferrying the religious or taking on groups of passengers to destinations already on your routes. In fact, the toughest part of the game, aside from some combat elements, comes in how some objectives are ‘regions’ on the map rather than set areas, this can mean that you need to spend days upon days rustling through spaces trying to track people down with your scouts. But, a good group of scouts and a light, well-stocked through can get you through even that. 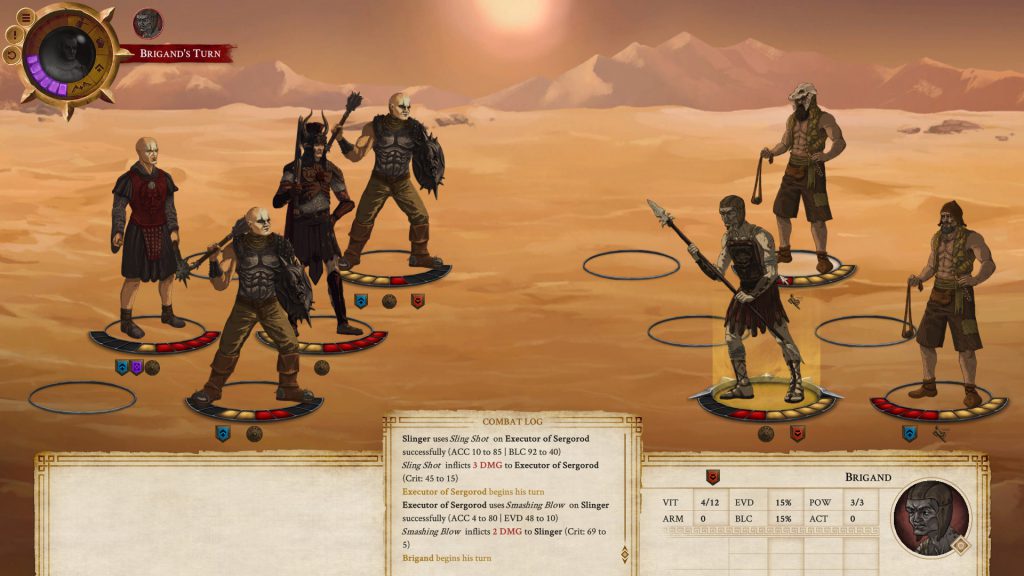 The difficulty, due to the intersection of systems, is probably going to be the most divisive part aside from all of the reading. There’s a silly amount of reading, writing and lore to get through, which is great for immersing yourself in the world, but a bit of a tough one if you restart. That said, if you do start again then there are more than enough variables that the experience is massively varied.

Vagrus: The Riven Realm is available now for PC, Mac and Linux.