You may already know that I love food-based games. I just think they are so fun, like a good cross between my hobbies. I have a particular love for Asian and Japanese food. It’s easy to say that I have had a lot of buns in my life. We’ve even made buns for our tabletop group, filling them with veggies and pork. Nice Buns takes my love of buns and puts them into an adorable board game, which I was very excited to play.

In Nice Buns, you are trying to get three of the same color buns and then bank them on your plate. Once you have three sets of three different colors, you win the game. It’s a really simple concept -—even children could understand and play with you. The only thing that’s missing is how you earn your buns. 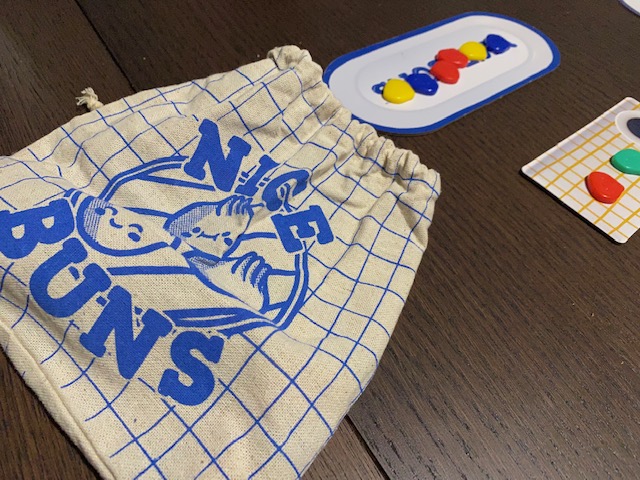 On your turn, you will roll three dice of three different sizes. These dice do different things. The smallest allows you to randomly pick buns from the bun bag, the middle sized dice allows you to take buns from the plate in the middle, and the largest dice is sort of a wild card that allows for interaction with the other players on the team. After you have rolled your dice, you need to divide them into two piles (one of one die and one of two die) and then the person after you gets to pick what pile they want, leaving you with the other pile.

The round is then resolved by doing the action on the smallest die (picking that number of buns from the bag), then the medium die (selecting a bun from the middle plate, of the same color as that side of the die shows. It’s worth noting this die can have more than one color showing, allowing a player to pick any of those colors), then the largest die (which allows you to steal from other players, swap with players, and more), before passing them all forward. I feel that this concept of rolling, dividing, and then being left with the leftovers of your turn is quite fun, especially as there is a lot of simple strategy that you can have while trying to decide what dies you want and what dies you should divide together to make it happen. 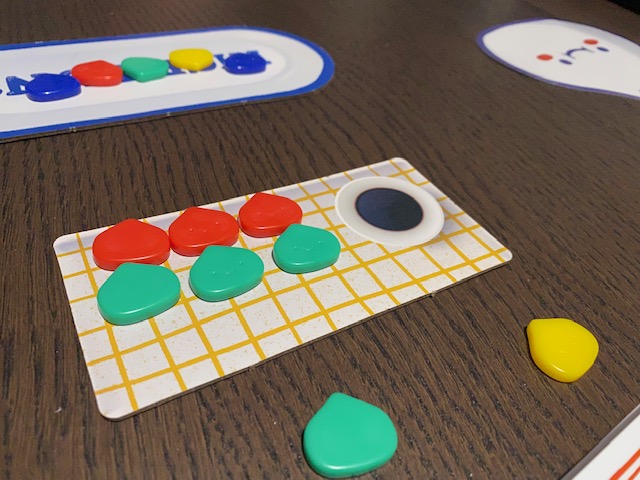 The bag of random buns in Nice Buns is a lovely cloth bag, full of smiling buns that are super adorable. You can use these at the end of each round to refill the plate in the middle. If you ever draw a fish head bun, represented by a dull grey bun token, you will find a problem on your hands. The fish head bun combines with whatever color you have the most of that are not banked in your plate. In Nice Bun, this is a really yucky bun, that needs to then be passed on to someone else or put back in the bag using the largest dice. You cannot bank anything until you get rid of this fish head bun, as it moves around your piles to the largest one.

At any point in the game, if you have more than three buns (either from drawing, or from counting your fish head buns) and they are not banked on your plate, you will lose all of these buns into the bag again, which can really set you back as everyone plays. 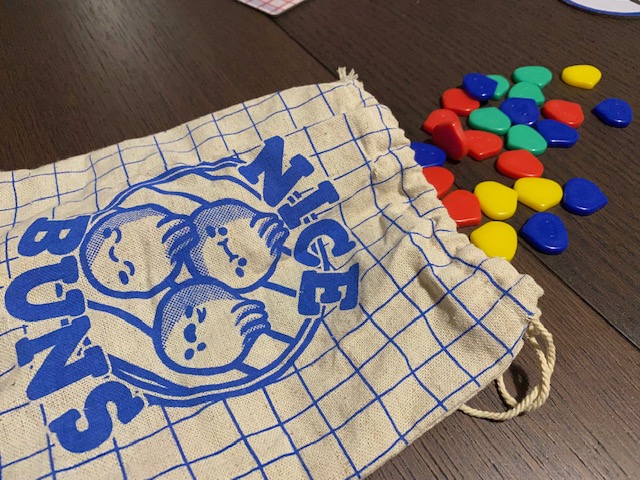 Nice Buns is a really casual strategy game, where you can spend some time thinking, but at the same time, there is just a lot of fun to be had. Players can steal and mess each other up, but often I found everyone is focused on what is best for them, with the occasional stopping someone from banking or winning if the game allows. I really enjoyed my time with Nice Buns and am sure that it is going to make its way out on our family game nights a few times!

The developers, Big Potato Games, also do a great job of being eco-friendly in their packaging, so there was no plastic in the box, and all of the pieces of the game are super high quality and just fun to handle! This box also came with a mini print-and-play version of one of their other games, which was a fun concept.

You can find Nice Buns on Amazon.