Unmatched: Battle of Legends, Volume One is a Duelling Delight

A long time ago (2002) in a galaxy far, far away (when Milton Bradley were still a trading brand) there was a game called Star Wars: Epic Duels. In this game, iconic heroes from the Star Wars universe did battle using cards and dice. For whatever reason, Epic Duels is now consigned to history, but thanks to Restoration Games, its highly asymmetrical mechanics live on through Unmatched: Battle of Legends.

In Unmatched: Battle of Legends: Volume One base set that I’ll be reviewing today, heroes like Luke Skywalker and Count Dooku are switched out in favor of license-free characters including Sinbad, Alice (of Wonderland fame), Medusa and King Arthur. Other sets are available, with characters like Little Red Riding Hood, the Jurassic Park raptors and even Bruce Lee being fully compatible. 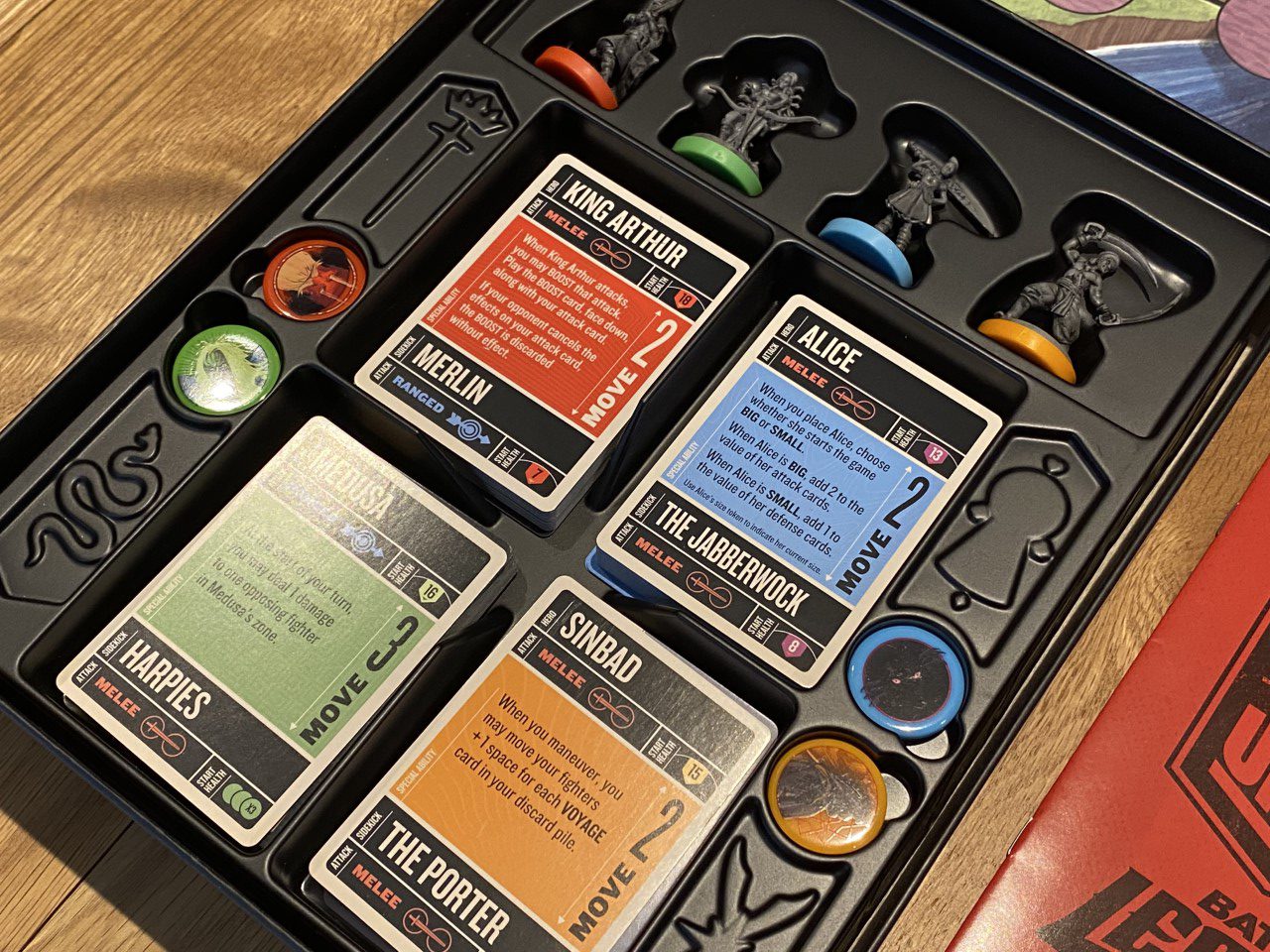 If that sounds like a fairly bonkers combination of antagonists, that’s because it is. In Unmatched: Battle of Legends, the players will take their chosen hero (usually with one or more sidekicks) and battle it out in a head to head duel to the death. A three player variant (which is a bit clunky) and a decent two versus two mode are available, but for me Unmatched: Battle of Legends is best played as a match between exactly two players.

Turns in Unmatched: Battle of Legends are very, very simple, with players choosing to take two actions from three available. Those actions are; Maneuver, Scheme and Attack. When a player Maneuvers, they simply draw a card and then move their fighters (fighter meaning both their hero and any sidekicks). When they Scheme, the player plays a card showing a lightning bolt card and takes the action described, and when they Attack, they simply play a valid attack card for the fighter that wishes to make the attack. 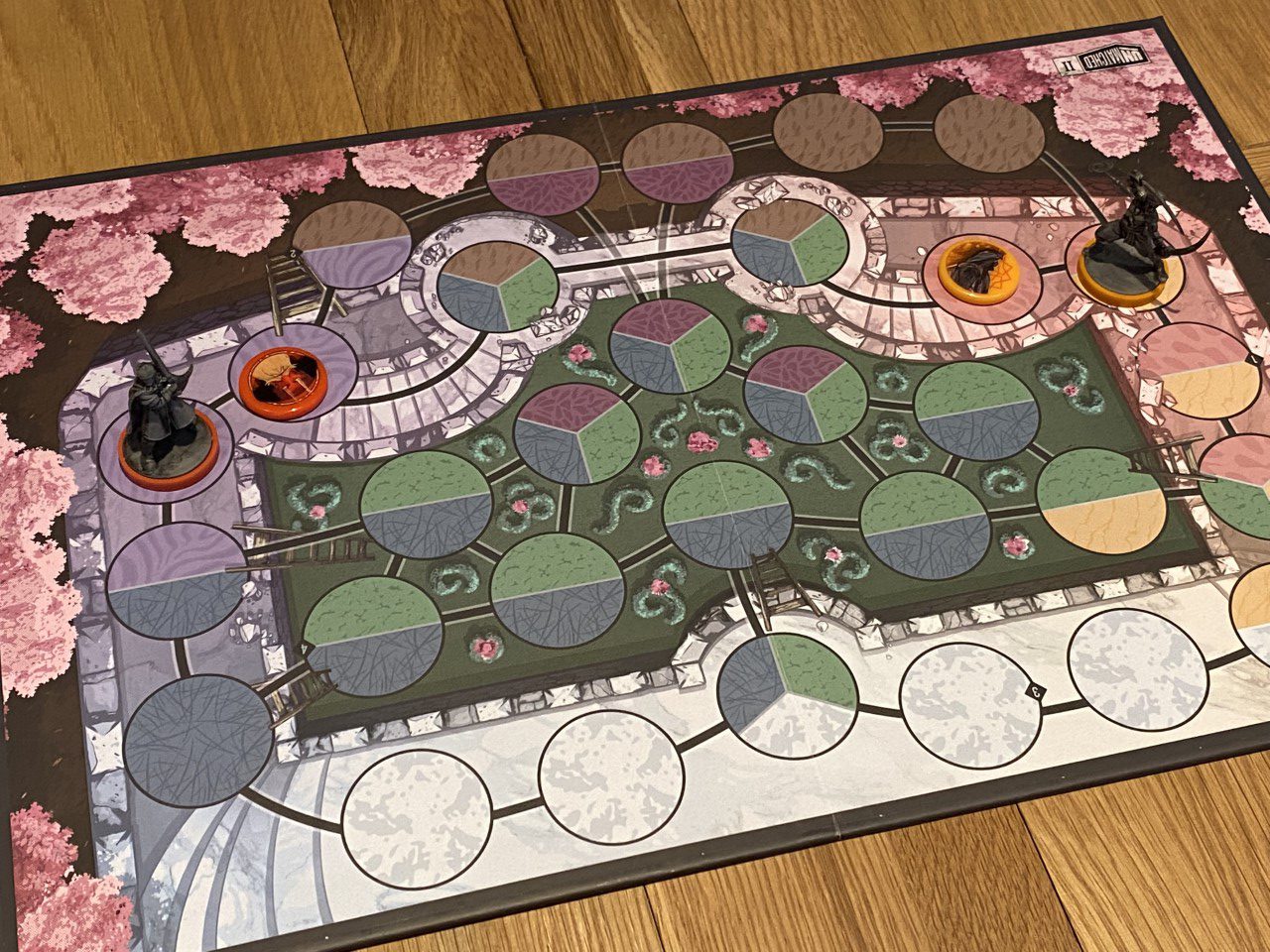 With this very straightforward structure in mind, what gives Unmatched: Battle of Legends its uniqueness is the massive difference between each of the hero characters. Each hero comes with their own deck of cards (around 31) and a summary card that explains that hero’s hit points, their movement, whether they have a ranged or melee attack and any special abilities that they may have.

Even in the base Unmatched: Battle of Legends game, the variety between the four characters is significant. King Arthur, for example, is a very powerful melee fighter who has some hugely damaging attack cards. His sidekick, Merlin, attacks from range and has some complementary Scheme cards that allow him — for example — to move enemy fighters up to three spaces. 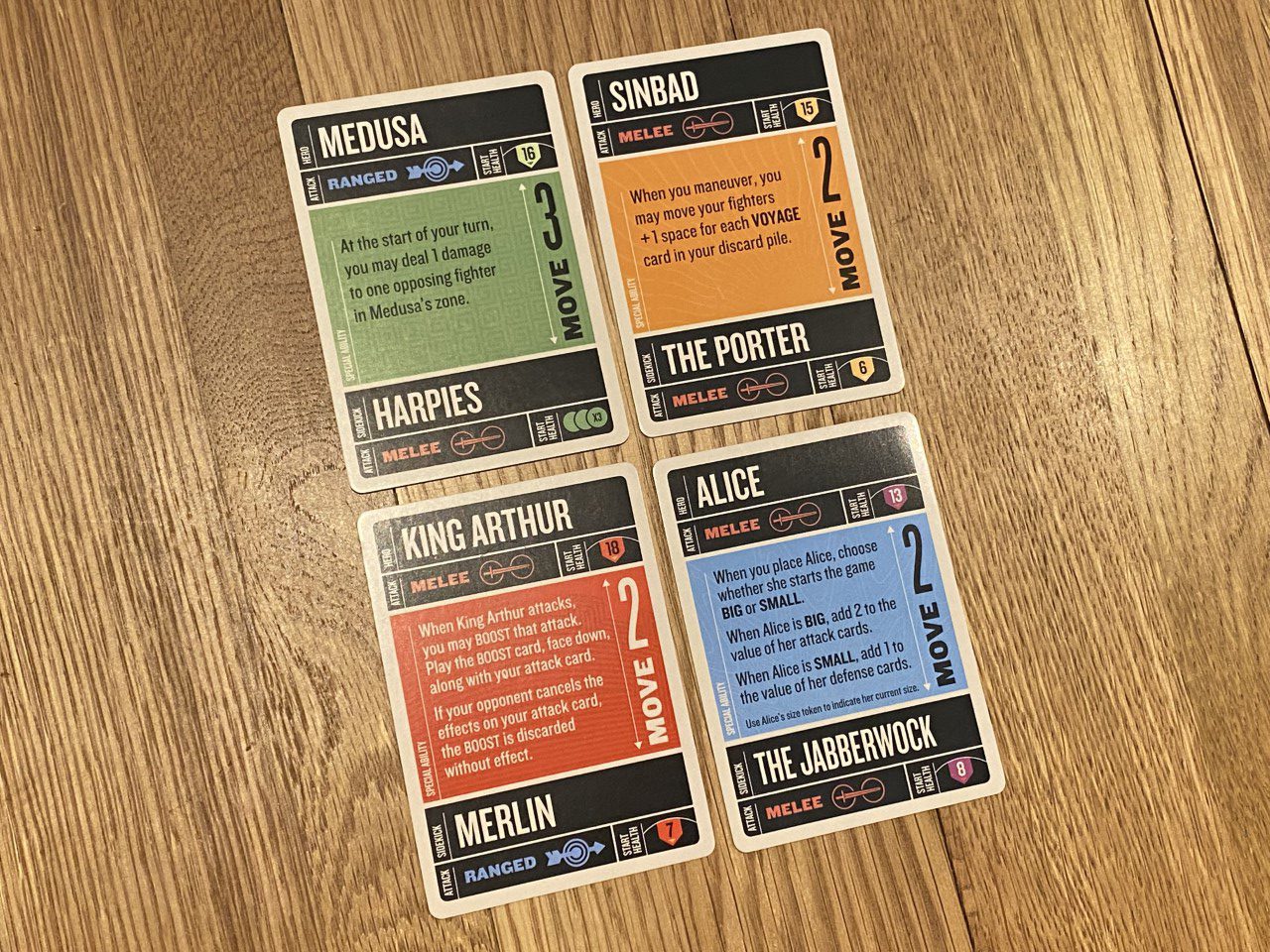 Alice is also a fantastic fighter, but she comes with the unique ability to switch from big to small based on certain card text. Big Alice deals two extra damage, whilst small Alice is evasive and gains one defence when attacked, She attacks at melee range as well, but her sidekick, the Jabberwock, is also a melee fighter (unlike Merlin) and has a deck of cards that are focussed on dealing damage.

The other two characters in the Unmatched: Battle of Legends base set are equally unique. Sinbad gets faster and faster (in terms of movement) as Voyage cards go into his discard pile, whilst Medusa, whilst only occasionally very threatening on her own, comes with three Harpy sidekicks that are easily killed but can then regenerate — adding yet another unique challenge for opponents to deal with. 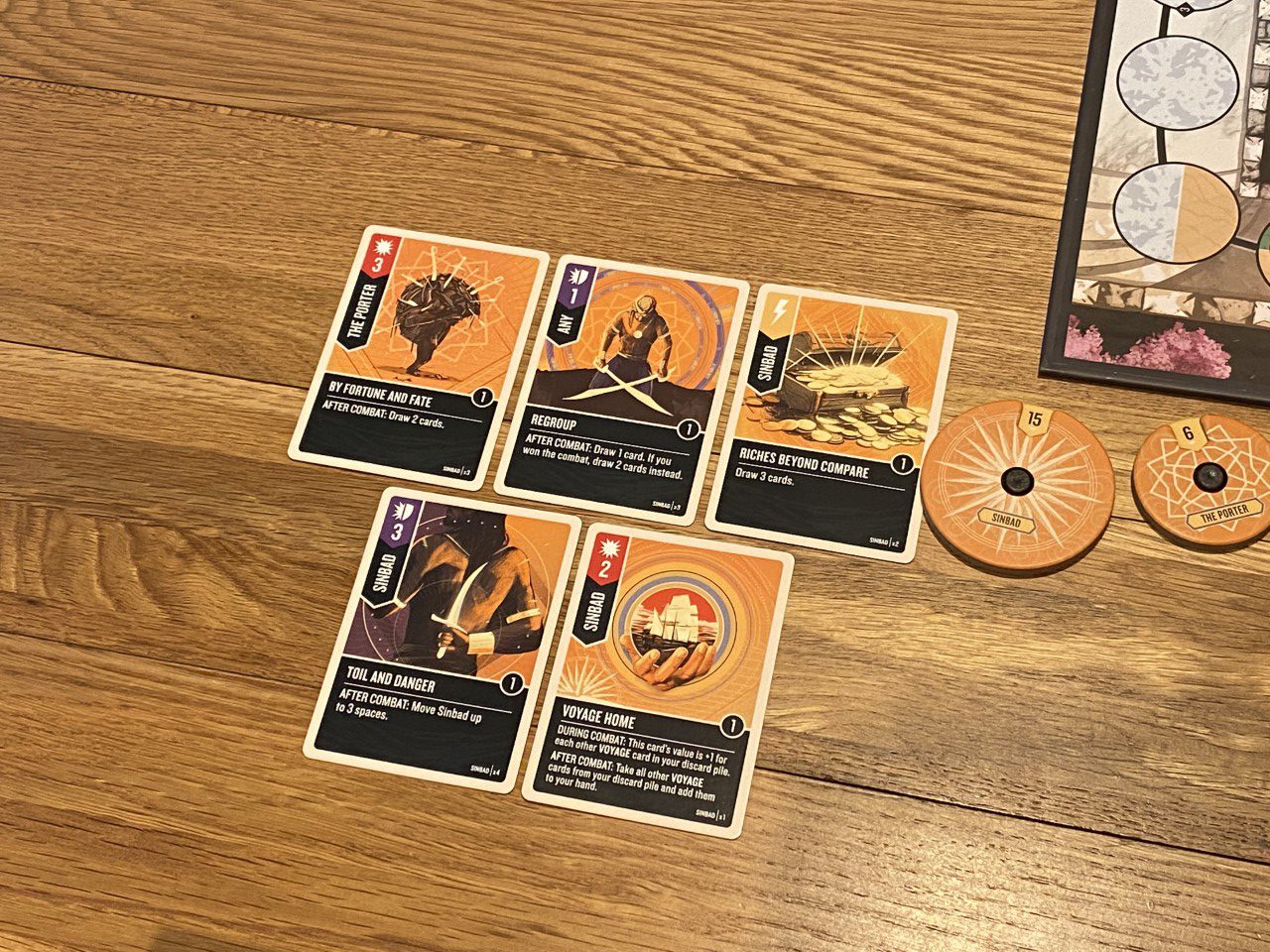 I haven’t played with any characters from the other expansions (although I hope to) but you can expect each one to bring their own thematic uniqueness to the experience, and there’s no doubt that expandability, replayability and experimentation are key aspects of Unmatched: Battle of Legends.

In practical terms, even the base game gives players a ton of options. I found it massively enjoyable to both experiment with the tactics that each hero offered, and then to see how my friends took on the same challenge. Often, we found that there are at least a couple of different ways to use each hero and sidekick combo, and this can vary based on the hero (or heroes, in a team game) that are facing you down across the board. 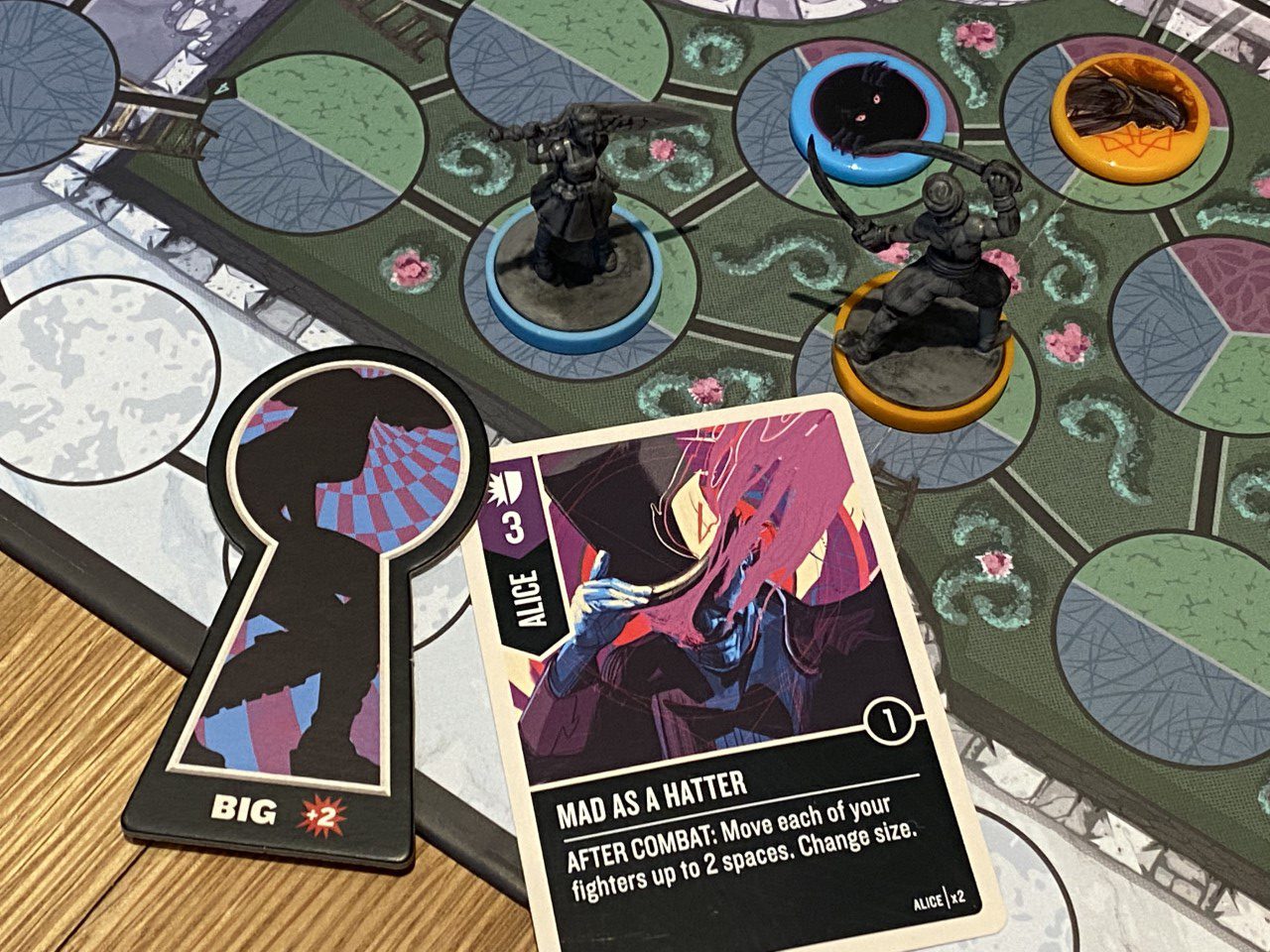 I think what works particularly well for Unmatched: Battle of Legends is the fact that the complexity is hidden. There is definitely nuance to learning each hero — and that can only be discovered fully through repeated plays — but by ensuring that the base rules are simple, younger or more casual gamers can rapidly become hooked. A game length of about twenty minutes really helps this, with players keen to replay the same character after a loss in order to “get it right next time”.

Unmatched: Battle of Legends is not perfect, and there can be mismatches between an experienced player and a new one — with no balancing mechanic — but in general some of the luck based aspects bring an element of baselining. For example, when a fighter attacks an opponent, the opponent may choose to play a defence card. Aside from the cards played already (which do show a count of how many are in each deck) there’s no way to tell what kind of attack is coming, and this can mean that good attack cards are blown because certain conditions are not met, or that a strong defence card is wasted on a weak attack. 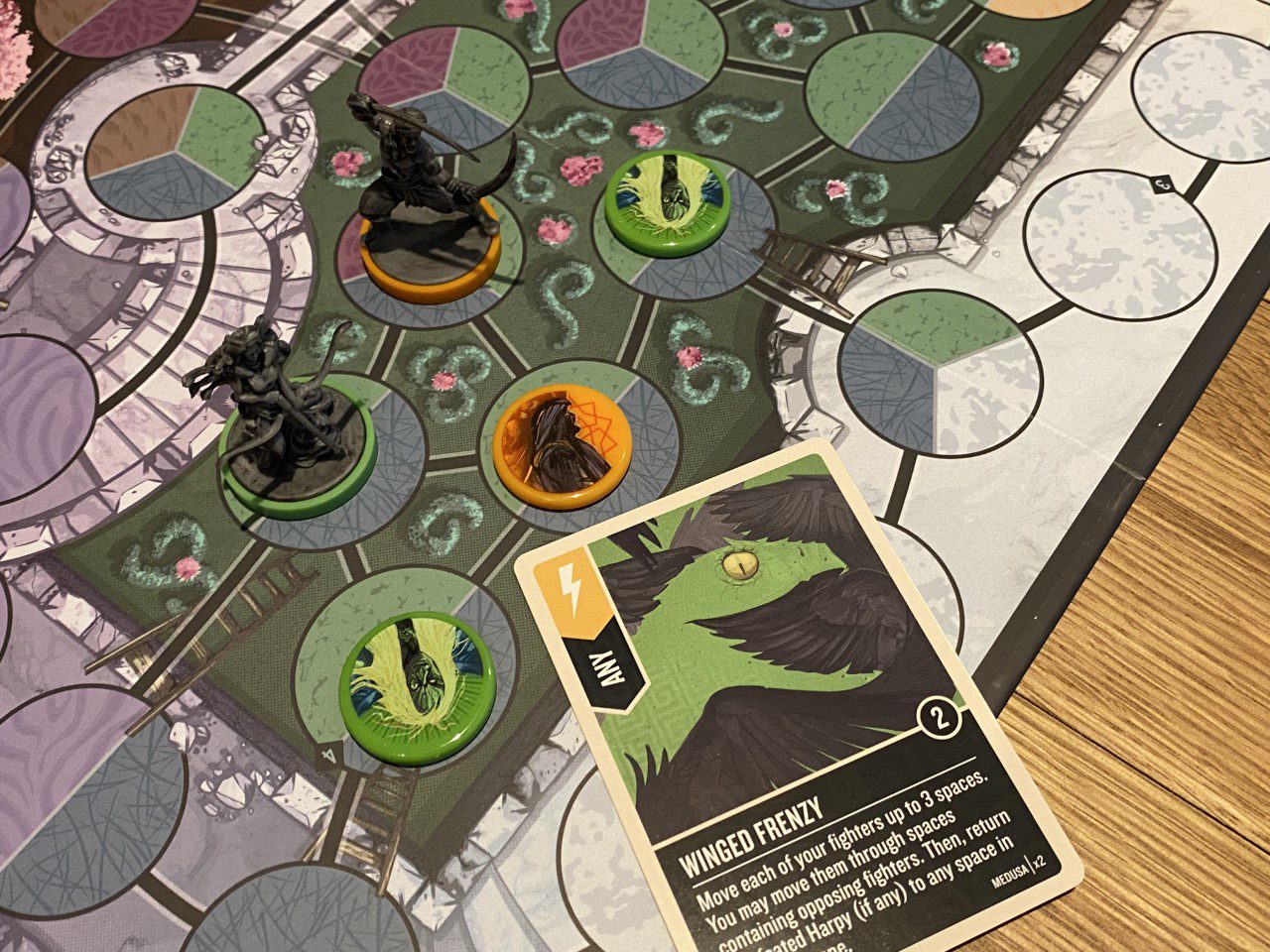 Additionally, a few bad turns (including bad card draw versus good card draw) in a row can put one fighter badly on the back foot, however this is somewhat mitigated by the generally robust balancing between each hero character. Even when a player falls badly behind, there are usually cards that can snatch a victory, or if not, the games are mercifully short as I mentioned earlier.

Unmatched: Battle of Legends is a superbly made game both in terms of its production and more importantly, it’s mechanics. It is set at an excellent price point relative to its quality, and the expansion content is already out there for those who want to track it down. Sadly, some of the expansions are rare and already being sold at a markup, but that’s hardly the fault of the publisher, and I would hope that more reprints are already in the works.

If you regularly play two player games and you want something quick, highly replayable and reasonably deep in terms of what it provides from one game to the next, then Unmatched: Battle of Legends is a really good choice. It can suffer — like any card driven duel game — from issues with luck of the draw, but it minimises these reasonably well and shouldn’t be an issue for two experienced players anyway.

You can find Unmatched: Battle of Legends on Amazon.