Ultimate ADOM — Caverns of Chaos (8.3) is a deep dive into the RPG element of roguelikes

Ultimate ADOM – Caverns of Chaos is a long-awaited sequel to ADOM, but how well does it build on the classic, dungeon-crawling roguelike formula?

The original ADOM, Ancient Domains of Mystery, was released a long, long time ago. First becoming available in 1994. I played that original version, and the revamped ADOM version that was released on Steam in 2015 (where it continued development). Ultimate ADOM – Caverns of Chaos draws a line under that and rebuilds some core elements of the original game into a tight, dungeon-crawling jaunt that doesn’t feel wholly dissimilar, but does feel newer.

From a distance, the differences seem negligible, but on closer inspection, there’s actually quite a lot on offer even for those who have played ADOM to death over the years. It manages to, through its redesign, make itself a very good starting point for those interested in diving into more ‘hardcore’ roguelikes.

But, to talk about Ultimate ADOM – Caverns of Chaos we first have to explain the core that it, and its predecessor share. 1994’s ADOM is a dungeon diving roguelike where characters were stacked up with a bevvy of stats and skills, much more comparable to D&D rather than the standard dungeon crawlers. Its immense depth was enough to scare off most people, and the ASCII art style didn’t help much either (even if it was a genre-appropriate, necessary evil). There were, and still are, lots of things to love about the original – either in its freeware or 2015 re-release version.

We’ve been playing through Ultimate ADOM – Caverns of Chaos in its Early Access state, it’s — at the time of writing — version 8.3, and so it might have more features when you’re playing it. We’re treating this as content complete beyond the skill trees, melee and magic revisions that the developer has mentioned in the Early Access notes.

Ultimate ADOM – Caverns of Chaos takes the dungeon crawler roguelike and distils everything. The main-screen UI, which was already quite good in the 2015 rendition, and streamlines it further; There are now icons for everything, which makes the clunky, still 1994-adjacent Backpack and Inventory menus of the predecessor into a much more modern, user-friendly design, and other systems — like quests, and all of the overworld — are scrapped, streamlining it into the heart of the franchise: the actual dungeon delving. 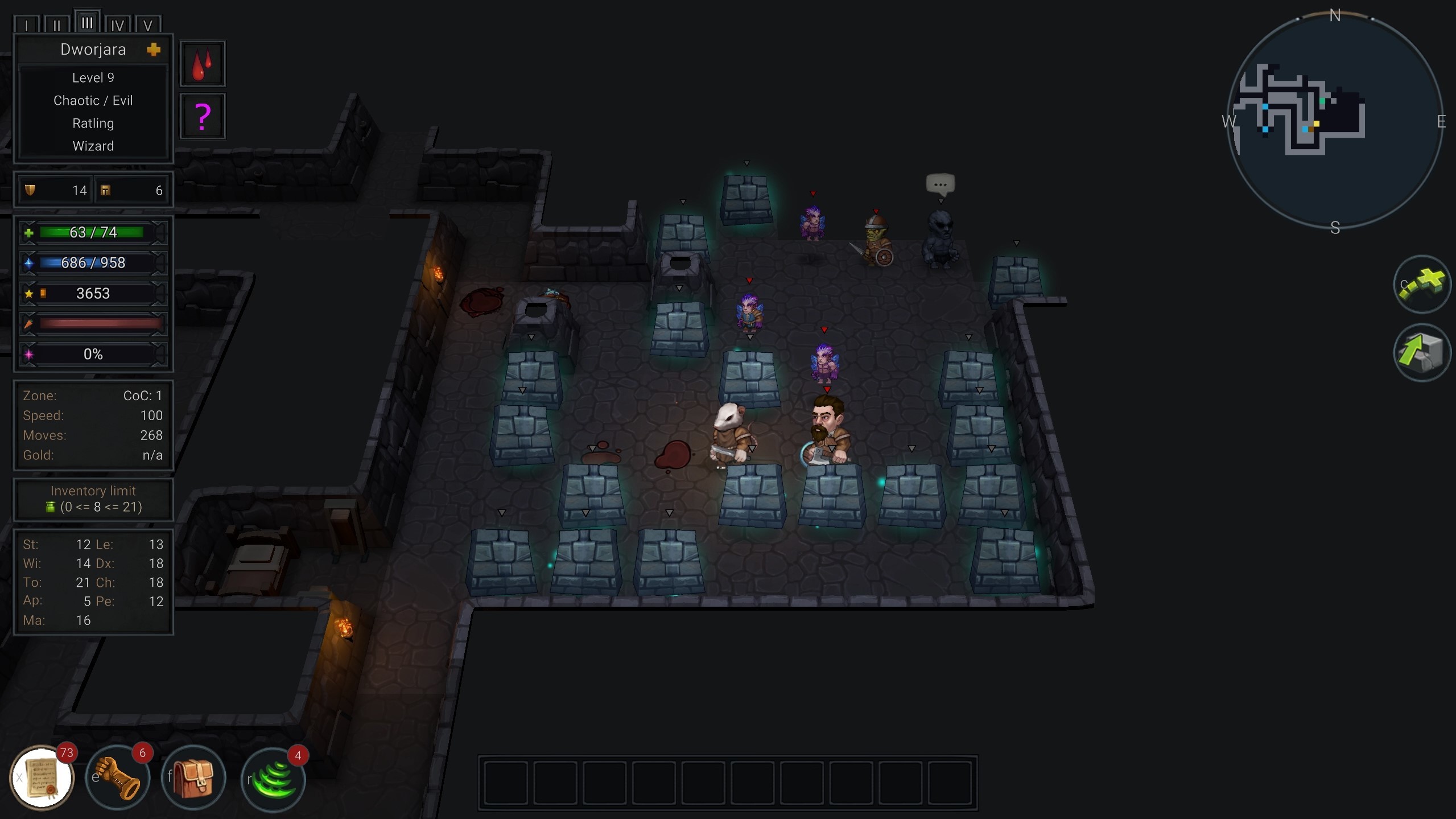 Oh, and the whole thing is projected 3D too, with character sprites being 2D but pivoting to face the camera, within a 3D setting. You can rotate the camera, as well as zoom in and zoom out. As somebody who played the previous iterations, I’ve not grown bored of rotating the camera to look around yet.

The absence of the overworld is felt though. There was something hopeful in the previous games, as you bumble through the squishy village with its squishy villagers in a world where everything hits to kill. In the 1994 version you could plant seeds, and your haggle stat could — presumably — mess with the prices of the shopkeepers. But, in Ultimate ADOM‘s defence, the game was all about the dungeon experience; players often dungeon dived until they were in too deep and then simply died, rarely did people actually bank the quests. The dungeon floors refilled with enemies and reshaped themselves on exit, so a journey down to a hard point meant an equally gruelling journey to the surface.

Stripping that out, though, means that the game can focus on character development in a different way than the original. In fact, the developer has said that they’re aiming for more of an RPG experience, one filled with a flood of skill tree options, items and enemies. That’s certainly the inverse of what we normally see with roguelikes, which tend to go one of two ways; either mega-hard, careful juggling throughout, or a game that happily, without warning, strafes from aRPG style grind into brutal difficulty boss fights. RPGs, especially the route that Ultimate ADOM has taken, reward specialisation, and tend to open up more as the game goes on, rather than pigeonholing players into a get-bigger-sword, fight-bigger-enemies loop. 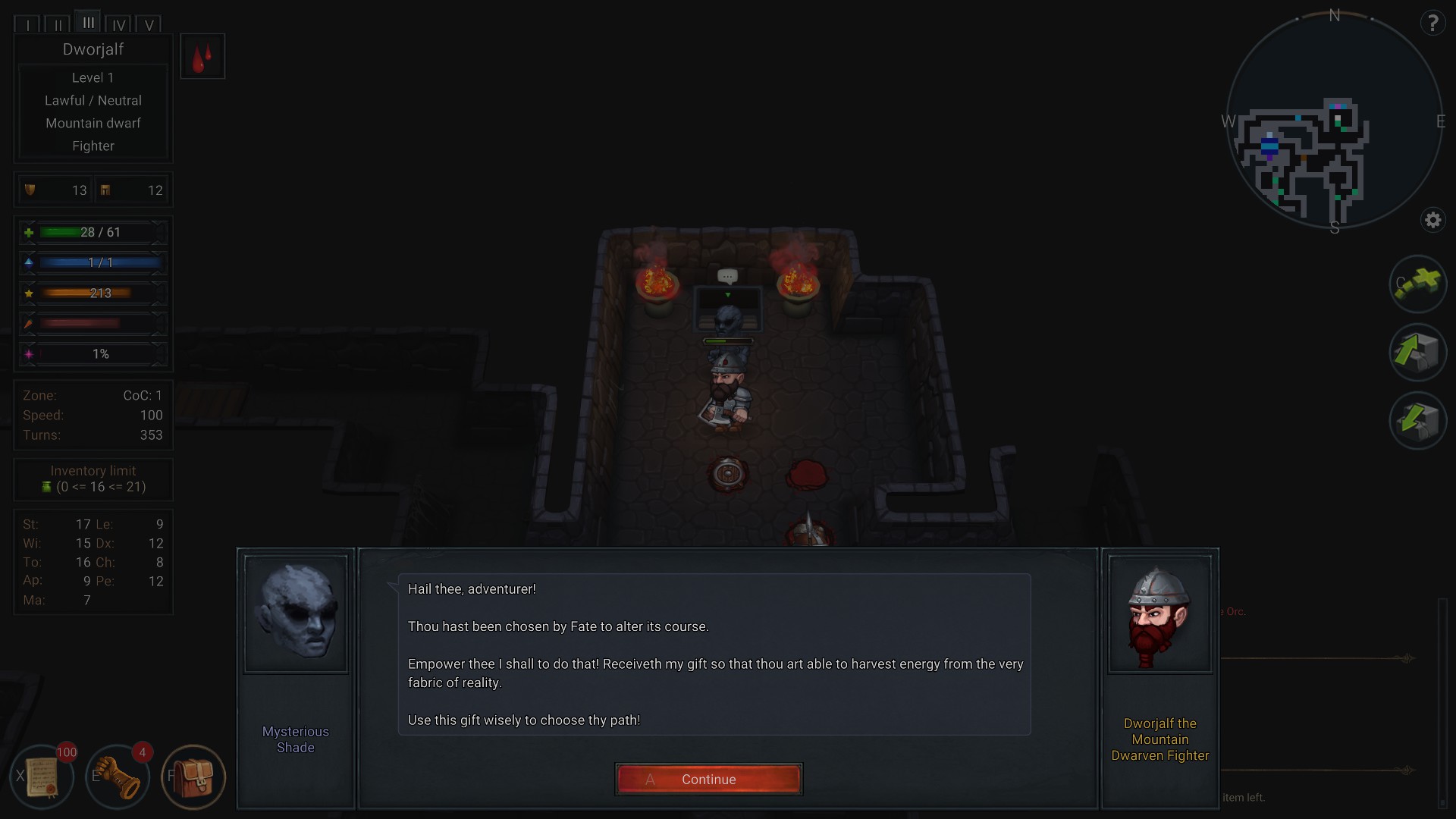 There’s some cool stuff already in there, 14 skill trees with skills ranging from summoning Ice Elementals through to being able to read. Read spells that is, something that’s not really explained in the earlier iterations of ADOM, and are very useful for getting you out of all that cursed clothing (or stopping you from idiotically putting it on before identifying it). You can also, and will frequently, find runes on the floor which you can bolt onto weapons and armour — adding a deeper customisation layer to the series where there wasn’t one before.

It’s quite reminiscent of Dungeons of Dredmor, a roguelike I always recommend due to its wacky attitude and bonkers skill trees (only enhanced further with Steam Workshop). While it doesn’t have the wackiness, the depth and ease of understanding is on par with, if not better than, DoD.

There’s a lot of other refinements; inventory is based on space rather than weight; you can punch clean through walls, and weapons break regularly too, encouraging you to change things up more frequently. Drowning and getting soaked follows an obvious, clear system, and events pock the multi-floored cavern. For every refinement, or element culled, another was added in.

Oh, one thing it does add, and very quickly (proudly?) promote to you in the tutorial is that there’s Necromancy in the spell selection. Before the tutorial is out you’ll have grafted another limb to yourself. In fact, there’s a lot of body modification, and flesh transitioning in Ultimate ADOM. Certainly a step further than the equipment tweaking of RPGs. 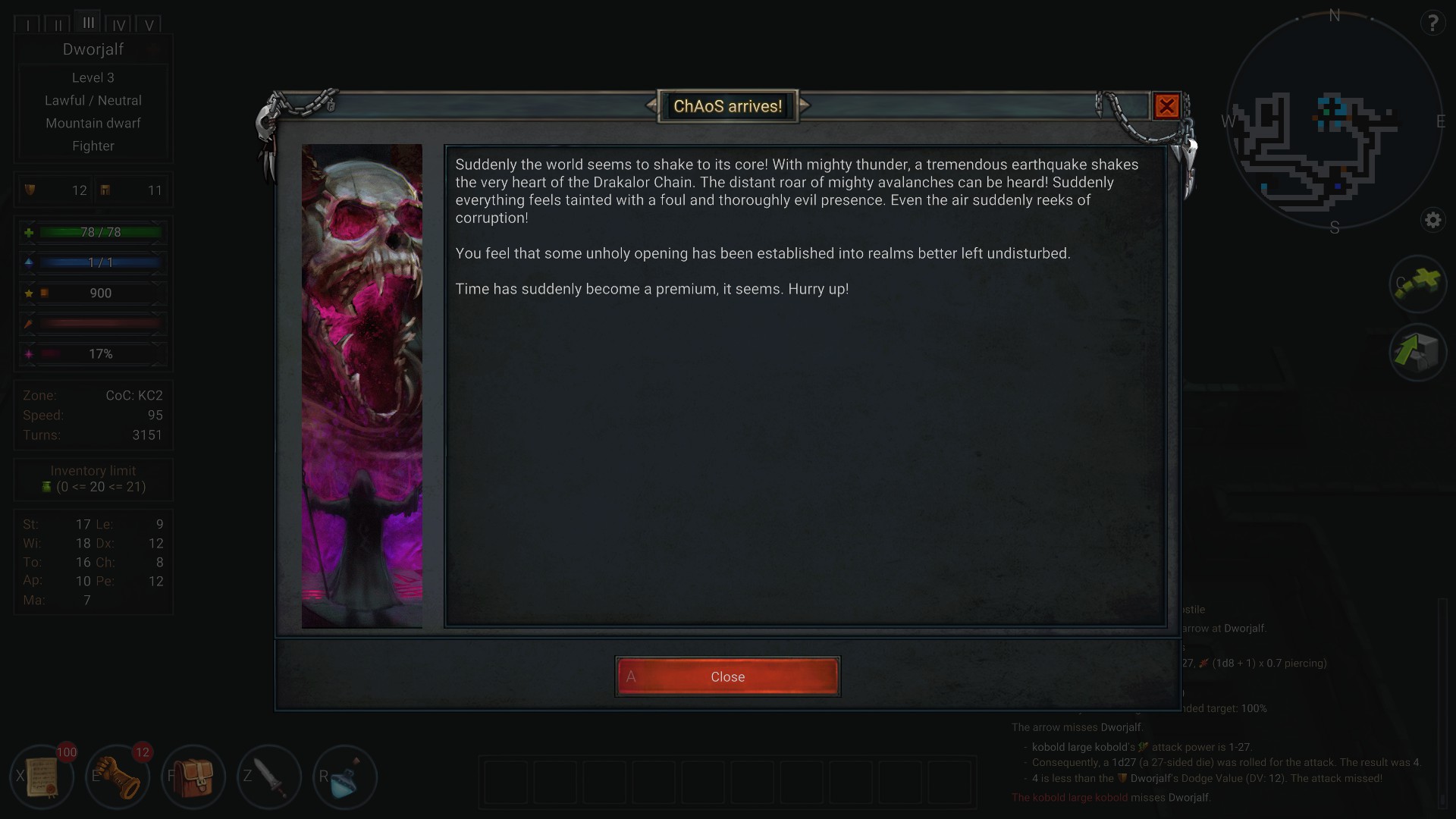 A large lump of that comes in the new corruption mechanic, a system as brilliant as it is chaotic. Corruption, just like in most 21st-century governments, is everywhere. Unlike in government, it’s in crystals, created by enemies and just sometimes simply looming around a corner. It spreads and, well, it corrupts, and if you touch it enough then it’ll corrupt you too. You’ll end up with fun things like extra arms, or extra eyes, however, you’ll also feel the negative effects, which stack up just as quick as the positive. It’s a fascinating mechanic, and very reminiscent of the ‘Taste of Power’ trope we commonly see games skirt around — why can’t I have some of the same power as the enemies? I can handle myself just fine, I can stop, what’s the risk?

Based on this RPG-style depth, it makes sense that the roguelike character creation takes a dose of narrative to it. Rather than being greeted with the usual ‘Race’ as your first step into Ultimate ADOM, it opens up asking you about your faction. You’ve choices here, and some of them frankly make the Unaligned, ‘Greedy Adventurer’ seem vastly more grounded than ever before. Interestingly, most of these add qualities and level effects, including lots of ‘Harvesting’ options, which are the ability to churn dungeon loot into EXP or health rather than just leaving it lying around in your wake. 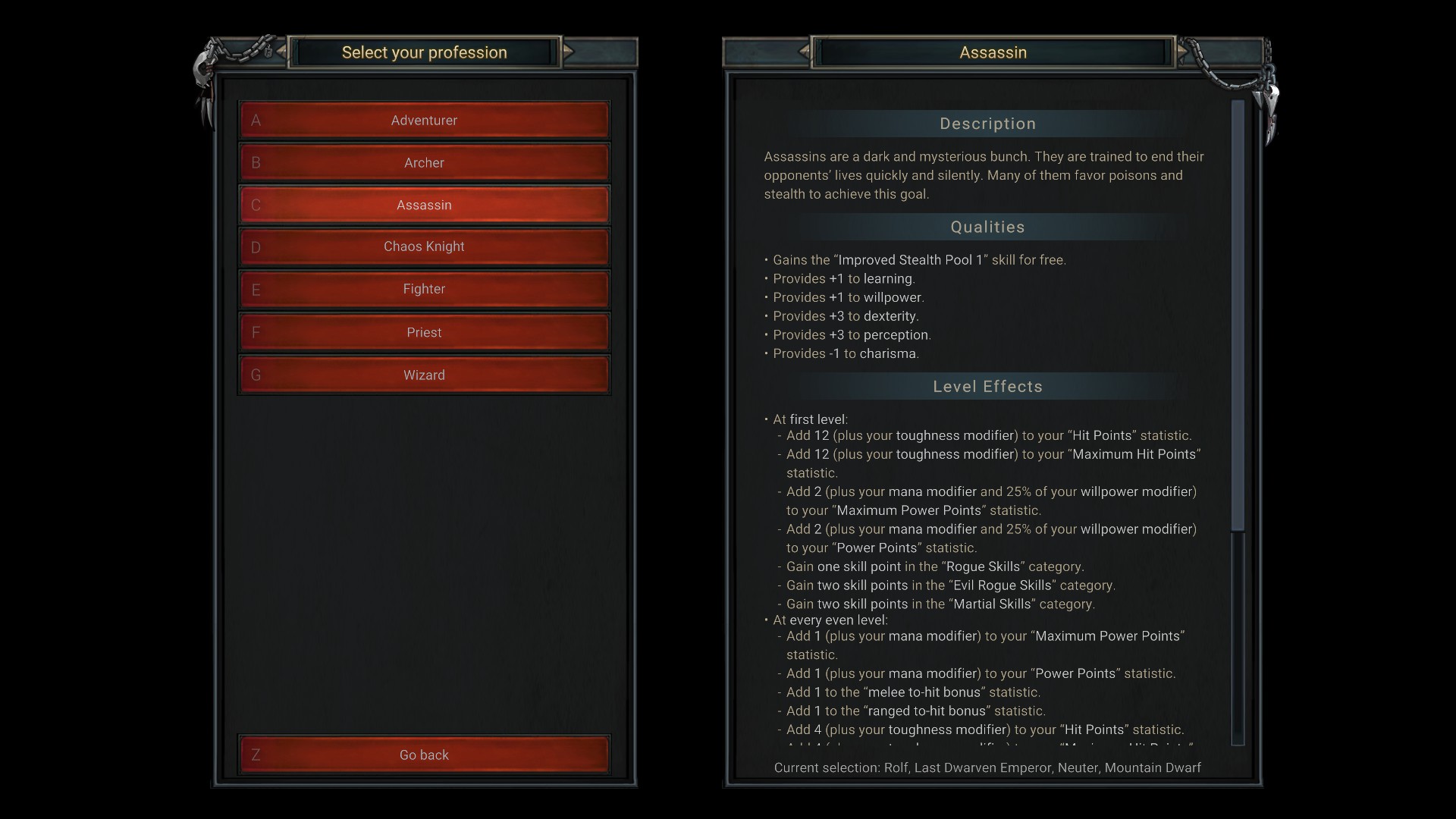 It then cycles through gender (which does have a decent selection of choices), race and class before getting to the previously mentioned skill tree. The game regularly makes nods towards your choices, carefully referencing your decisions during character creation wherever it can.

If that’s not for you then the pre-fab characters offer a decent tasting of the width of the RPG system, and hopefully, there’ll be more of those made available as the skill system continues to be developed in the future.

It evolves the *tough* roguelike space in interesting ways. While there’s plenty of innovation, and titles adding depth, in the space, Ultimate ADOM really punches a lot higher than the legendary title that it serves as a sequel to… and it’s still got plenty of opportunities to keep growing.

Ultimate ADOM – Caverns of Chaos is available now on PC, Mac and Linux.