Warhammer 40,000: Space Wolf is not the 40k Tactical Strategy game you are looking for

I like to think that reviewers such as myself keep an open mind. After all, games are very rarely made by people who don’t care about the subject matter — especially not when you’re talking about independent games that are created outside of the influence of larger, more commercial entities. Warhammer 40,000: Space Wolf is one of these smaller titles, and despite an excellent deck-building mechanic at its heart, it is otherwise extremely lacklustre.

Warhammer 40,000: Space Wolf opens up by throwing the player directly into a Tutorial mission that loads in the most janky way possible, setting the tone for some of the worst sounds, visuals and dialogue that you’ll see on your brand new, £600 console. What follows is a haphazard introduction to the control scheme which is so bad that I restarted the game at the first attempt because I thought it had crashed. 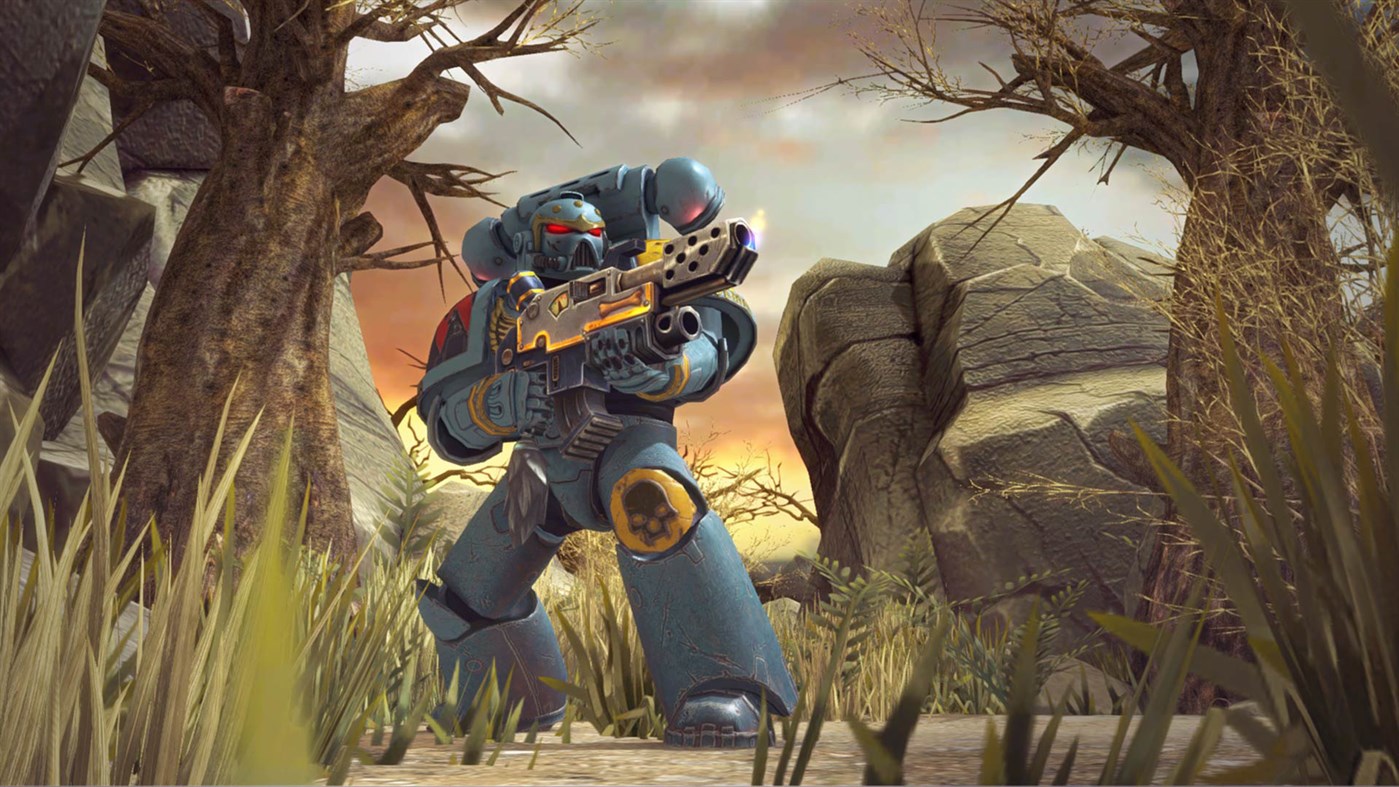 Indeed, using a control pad to play Warhammer 40,000: Space Wolf is less than fun. As in most tactical strategy games, the player moves a team of up to four characters around a grid based arena. Here, though, when the player chooses to move a character, there’s a need to draw out the path square by square — and the input response is awful. After the move is over, the player chooses a direction to face — something that is also made to happen at a ridiculously slow, frustrating pace.

Once you do get to grips with the controls, you’ll be free to examine some of Warhammer 40,000: Space Wolf’s other problems. It’s visuals, for example, which look just about fit for the PlayStation 3 era, rather than the current generation. Character models are dull with relatively few colours, but in particular, none of the rich, ridiculous detail that the Warhammer universe is famous for really comes across. 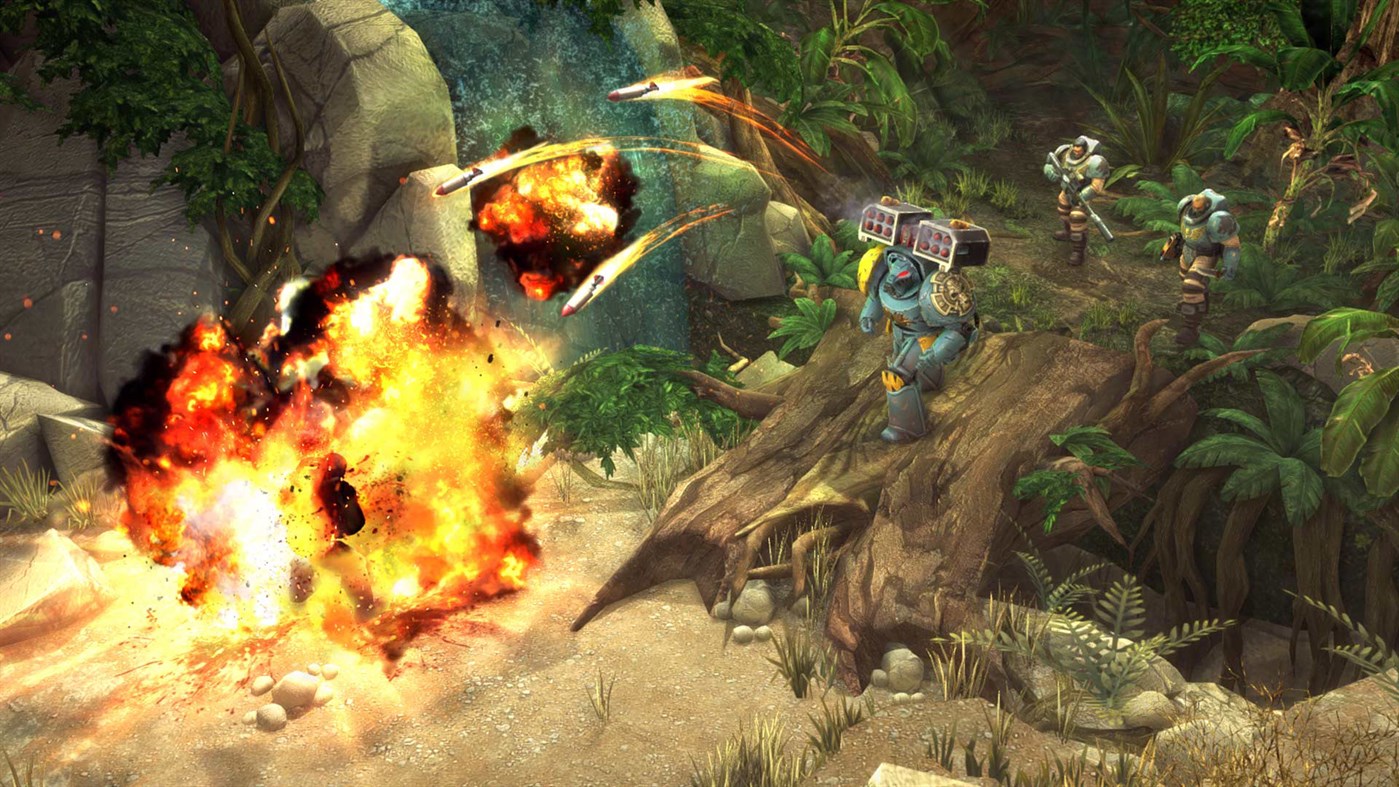 When characters move, the animation is pretty poor, and there’s very little “static movement” when characters are stationary — they really do just seem to wait their turn, creating no sense of urgency. The backgrounds? Don’t even ask about them — they set the scene and there is some variety among mission locations, but there’s nothing here to scrutinise and look for interest in.

The final thing I want to complain about is the text and narrative sections in Warhammer 40,000: Space Wolf. Now, I won’t try to suggest that Warhammer novels or other materials have especially good writing — most of this stuff is overwrought teenage-boy-fantasy-trope nonsense, but whether you like it or not, Warhammer lore has a very strong identity. Space Marines act and communicate in a certain way, their seething, bile filled conversations are part of what makes Warhammer 40k the silly-fun that it is. 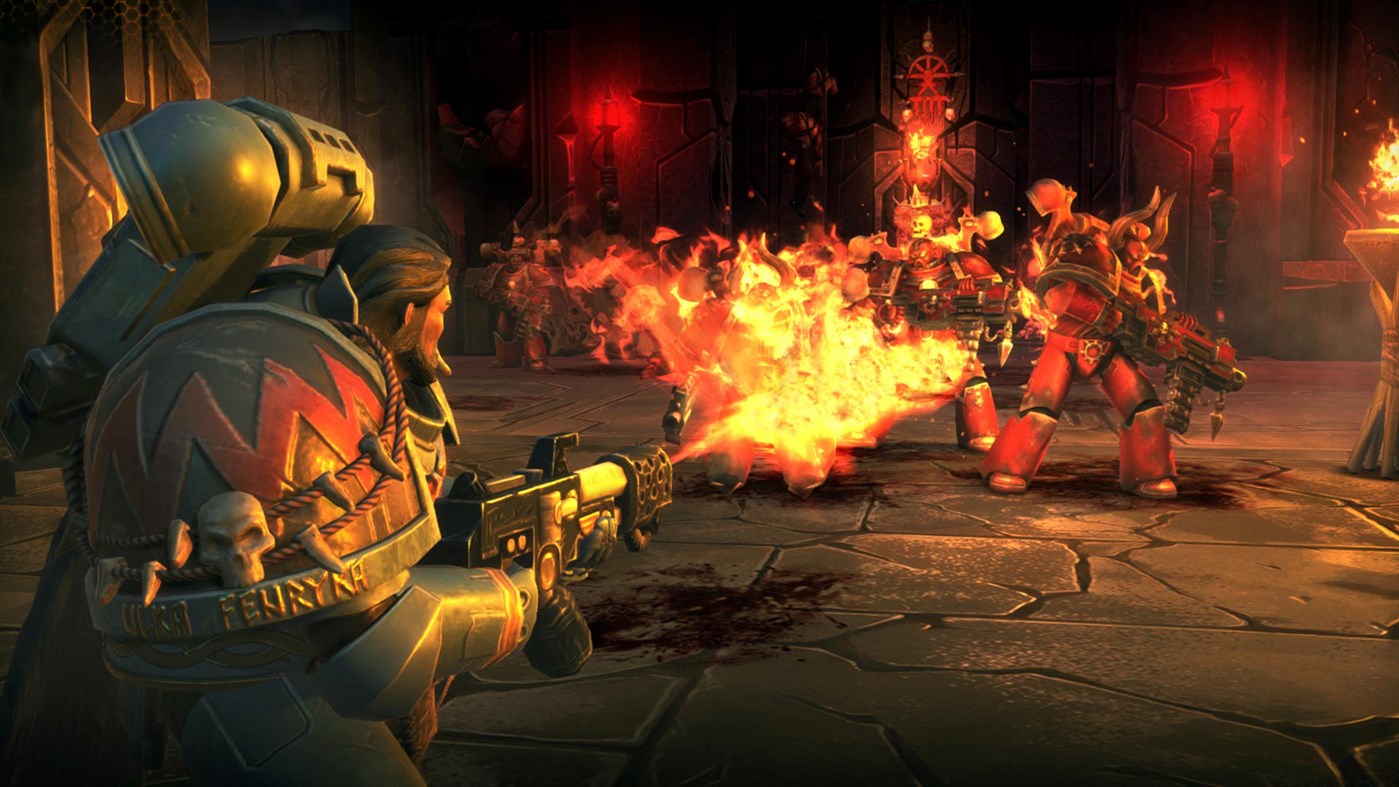 Given that the Space Wolves are among the angriest, most vengeance fuelled of all Space Marine chapters, the dialogue in Warhammer 40,000: Space Wolf is positively Dickensian by comparison to what I was expecting. Not only is the writing timid and bland, it’s also just dull as dishwater. If a modern game is going to favour text over spoken narrative, at least write something word reading.

So what does Warhammer 40,000: Space Wolf do well? Honestly, it’s just that deckbuilding mechanic that it uses. The player is free to configure their deck as they wish, with cards ranging from close combat weapons to sniper rifles or heavy plasma cannons and everything in between. On the battlefield, any card can be “burned” to move, whilst others allow a card to be boosted if such a card is in your hand, when a boostable card is used. 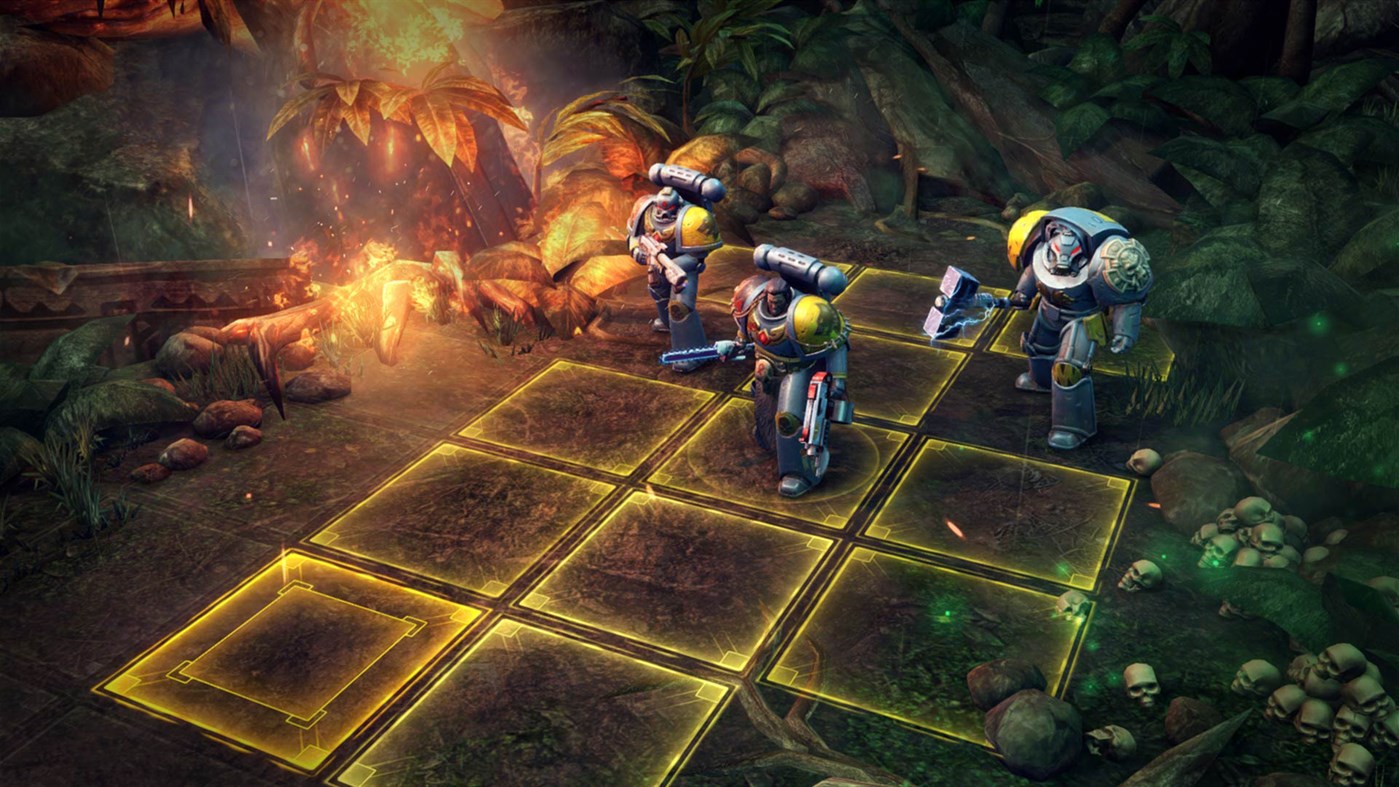 There are lots of interesting ways in which Warhammer 40,000: Space Wolf plays with these mechanics. Some attacks force your opponent to discard cards, whilst others are powerful and will cause you to discard a card. Some cards feature a single use attack, whilst others can be equipped as weapons giving two or three shots, and allowing another similar card to be used to “reload” the associated weapon.

A booster-pack based system offers the player the chance to unlock new cards ranging all the way up to Legendary quality, whilst a card crafting mechanism allows the player to spend in-game salvage (which can also be bought for real money) to construct cards of a specific rarity, potentially allowing them to focus on wheat, without looking through any chaff at all. 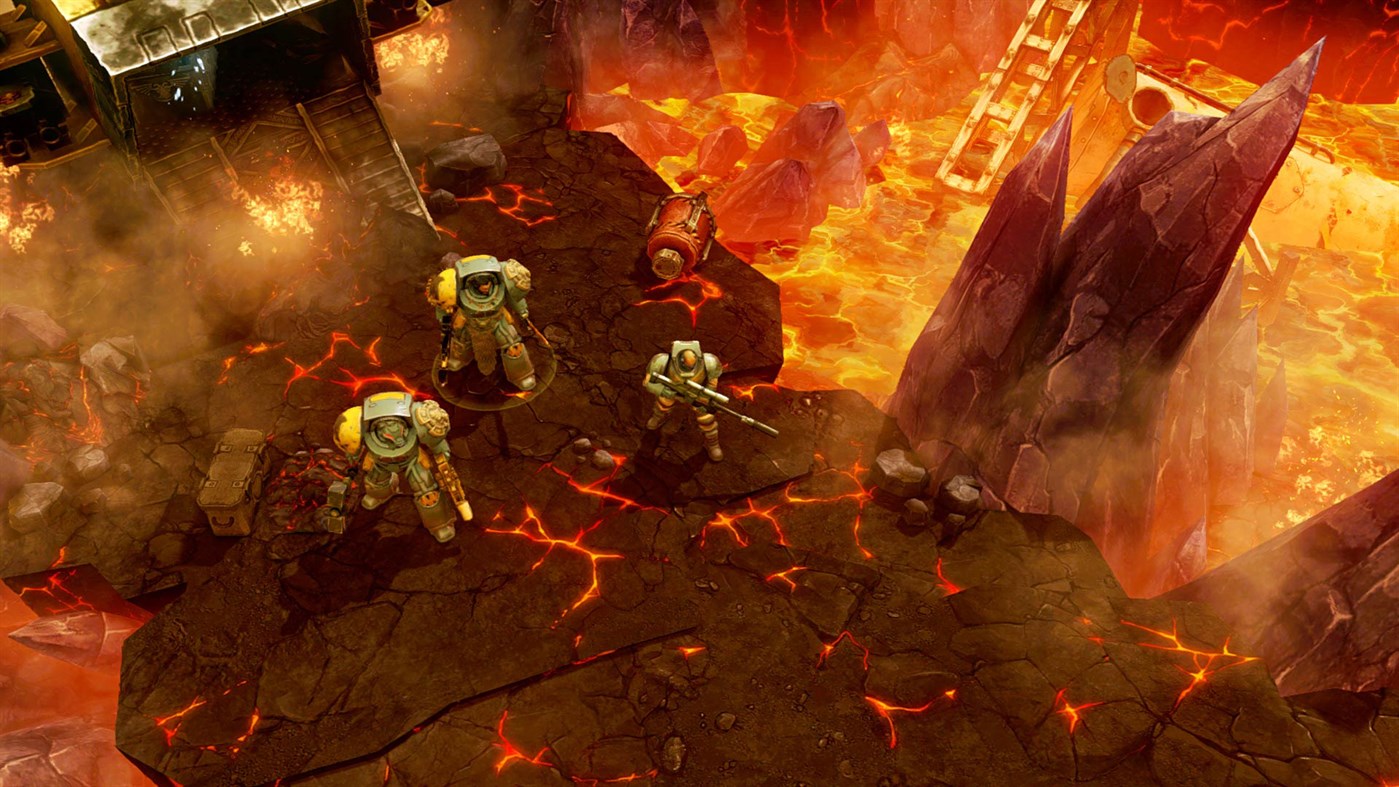 On the battlefield, this card-driven mechanic leads to some interesting decisions. Will you burn good cards that you can’t really use just to get closer to the action, or will you try and save them? What if you draw a lot of melee cards for a character that you’d like to keep at range? What if your Scout is badly wounded, but doesn’t have a healing card – do you retreat and try and draw into some better options?

When you bring all of its aspects together, Warhammer 40,000: Space Wolf has an interesting enough central mechanic to keep players interested for a while. I think the problems are probably more prominent for those like me who have some understanding of the lore. Most of what Warhammer 40,000: Space Wolf offers is a bit of an aberration here – with such uncharacteristic dialogue, a lack of visual detail, and a mechanic that doesn’t really exist within the Warhammer universe itself. 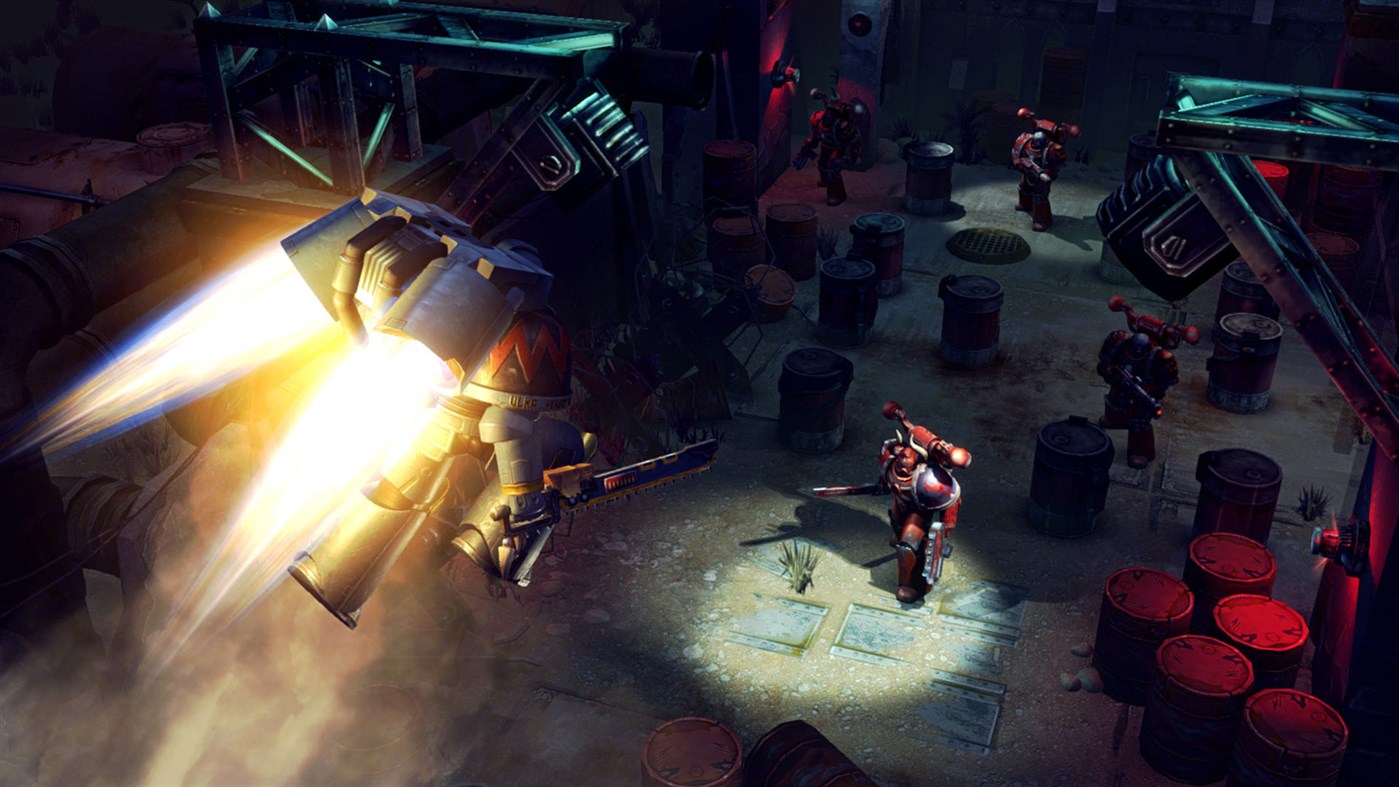 The reality is that Warhammer 40,000: Space Wolf might have been better off without the license, since it only serves as a skin for the characters, settings and enemies. Had the money used to obtain what is a fairly liberally used license been spent elsewhere, I think the end result might have been better. Overall, it’s better to have good gameplay and poor presentation and Warhammer 40,000: Space Wolf almost gets away with that kind of statement, but it’s still tough to recommend as a complete package.

You can find Warhammer 40,000: Space Wolf on Nintendo Switch, PS4, Xbox One, PC, Android and iOS.