1565: St Elmo’s Pay allows you to re-enact the fall of Malta

For Suleiman The Magnificent — leader of the Ottoman Empire for more than fifty years, the siege of Malta was the beginning of the end. With 30,000 men at his disposal, Suleiman had calculated that the 500 Knights Hospitaller defending Malta would fall easily – as they had at the siege of Rhodes almost fifty years prior. He was wrong. Using the same system as introduced by 1066: Tears to Many Mothers, 1565: St Elmo’s Pay tells the tale of the greatest siege in history.

In a nutshell, 1565: St Elmo’s Pay is a complete reimplementation of the 1066: Tears to Many Mothers system, with just a few minor tweaks and new mechanics. So similar, in fact, are the mechanics between the two games, that designer Tristan Hall expects people to mix up the four armies that feature across both games. 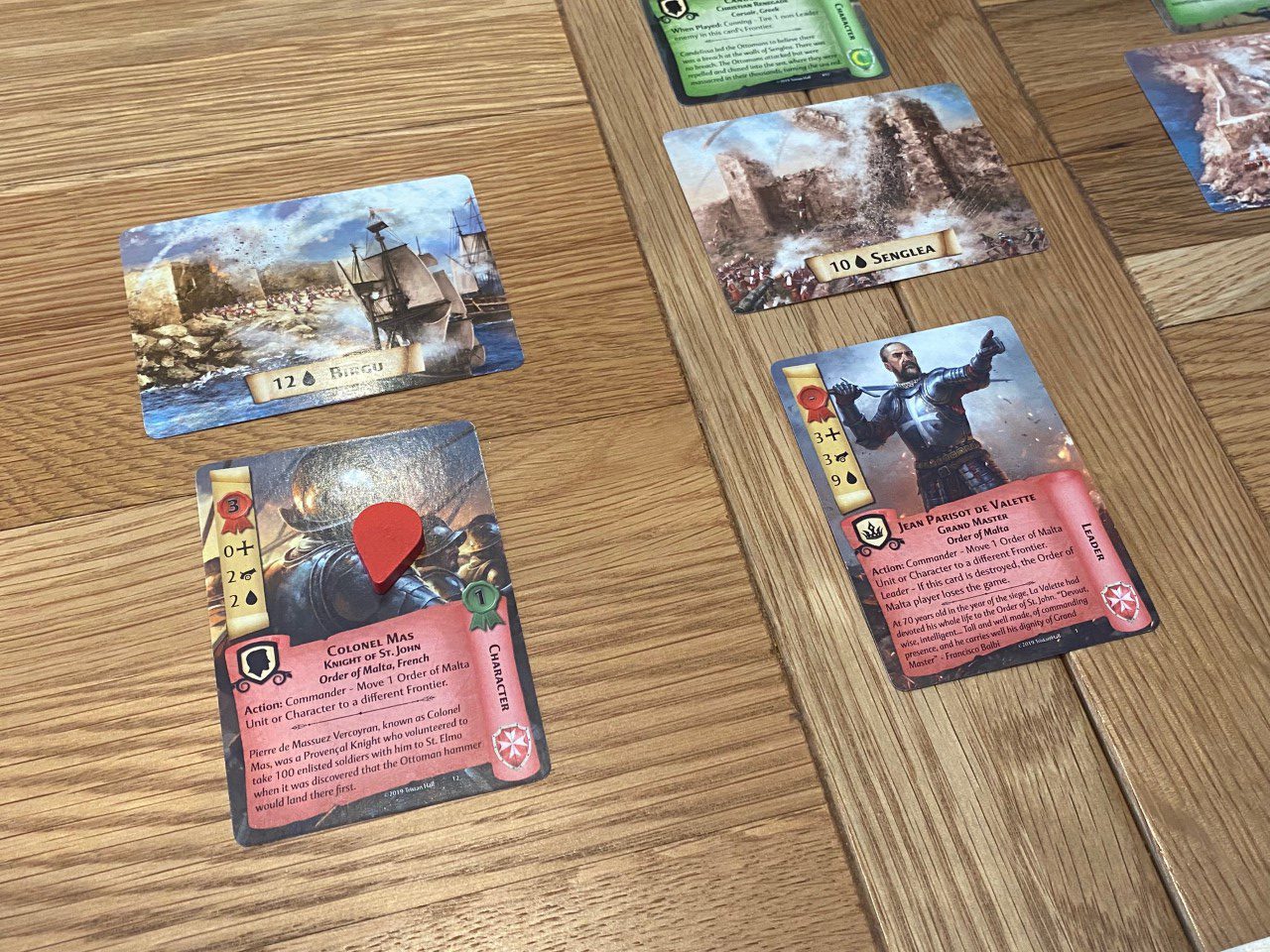 Building on this concept, 1565: St Elmo’s Pay is the middle game in a trilogy (that we know of) with a third game in the series called 1815: Scum of the Earth to centre on the Battle of Waterloo. Players can expect that the French and British armies featuring in this third installment will also be compatible, so whilst a battle between British line infantry and those of the Knights Hospitaller is thematically challenging, it is apparently mechanically possible — colour me excited.

Enough about future potential though, let’s talk about what we have here in front of us. 1565: St Elmo’s Pay features artwork which is on par with 1066: Tears to Many Mothers, and anyone who has read my review of that game will recall that I used superlatives like “some of the best artwork in any game to date” and so on. It’s true — 1565: St Elmo’s Pay features a couple of hundred cards, most of which feature unique characters, locations and scenes from the battle, all in a fine art style that lends historical credibility (even for the made up bits). 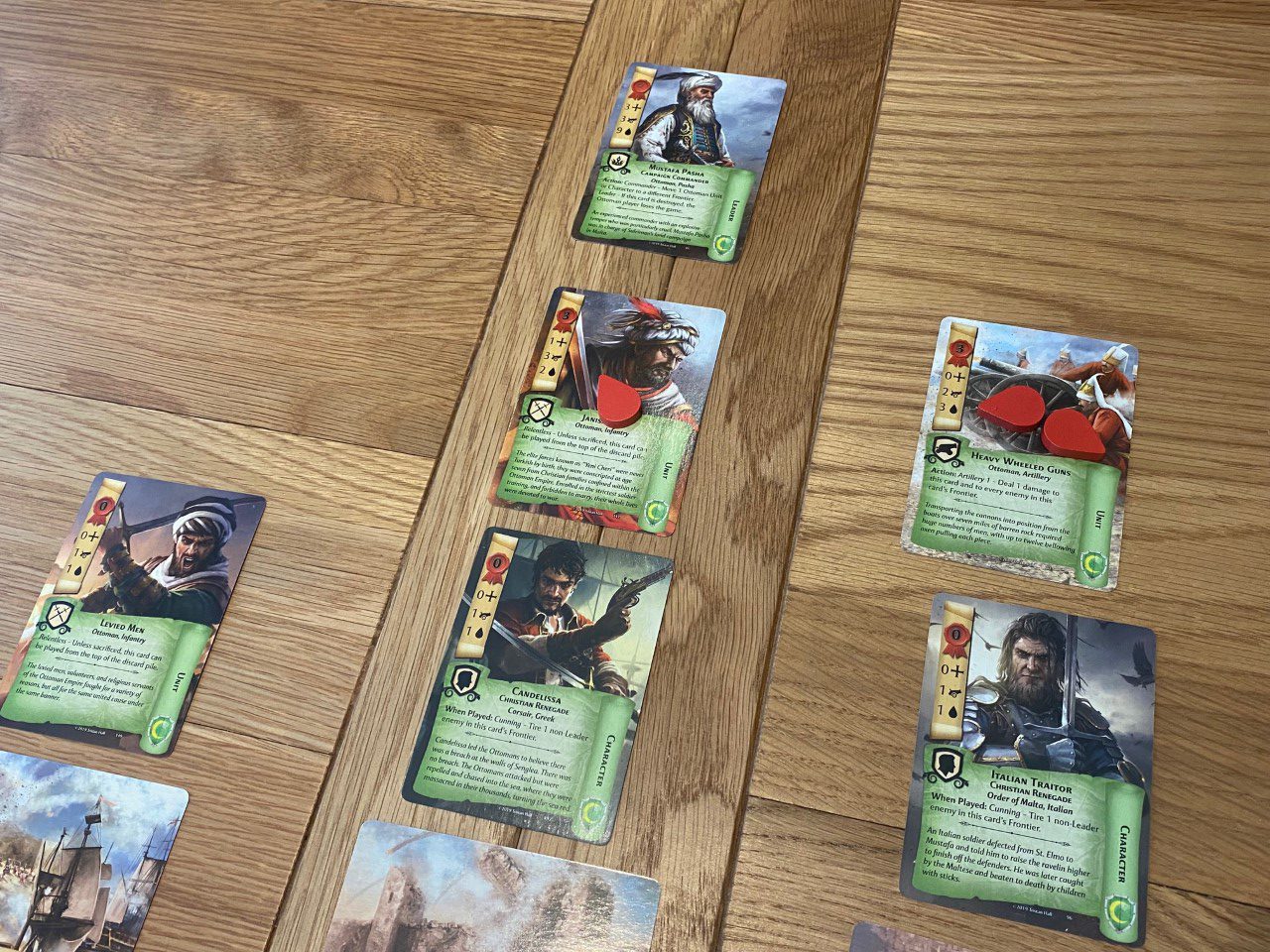 1565: St Elmo’s Pay looks nothing short of fantastic, and if good looking card games are something that you like to have on your shelves, then you really can’t go far wrong with this one in terms of how it looks. In addition to the cards, you’ll also find solo and two player rules, a handful of tokens, and resource and health chips in the box. A handy resource management dial for solo play is added over and above what featured in 1066, and it’s clear that solo play is more of a focus in 1565: St Elmo’s Pay — which is good considering the times.

In terms of gameplay, 1565: St Elmo’s Pay features a head to head battle between the two sides — Suleiman’s forces on one, and the Knights Hospitaller on the other. At the centre of the battlefield will be the three forts over which the belligerent forces fought, the first of which is the titular St Elmo’s. Each fort has a number of hit points, and the two players will test their might in each of the three columns (one per fort) to try and win the battle at two of the three locations. 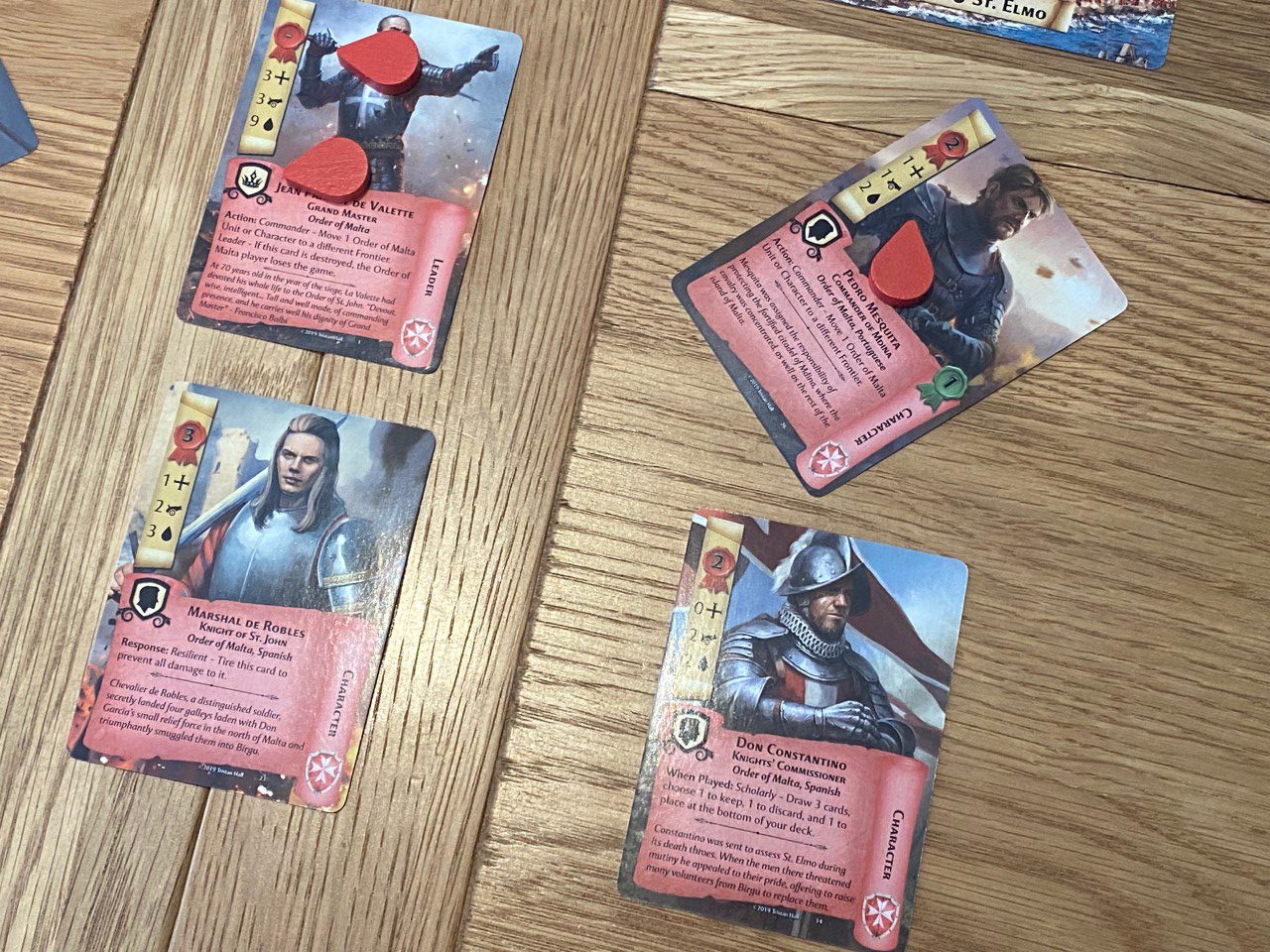 Before the forts can be contested, however, there are a number of objectives for each side that must be completed. The first of these is actually dated 1515, representing the aftermath of the fall of Rhodes. Between then and the final battle in 1565, the two forces will seek to raid each other’s supplies, commit acts of piracy and partake in smaller skirmishes — each of which takes the form of an objective against which to test your might or zeal.

To be clear then, the way that 1565: St Elmo’s Pay plays out is that the two sides first try to complete their objectives as fast as possible, with the final one then allowing them to begin the assault on Malta itself. If one player should reach their final objective first, then the other player will not be able to contest, and therefore the first player will have quite an advantage. 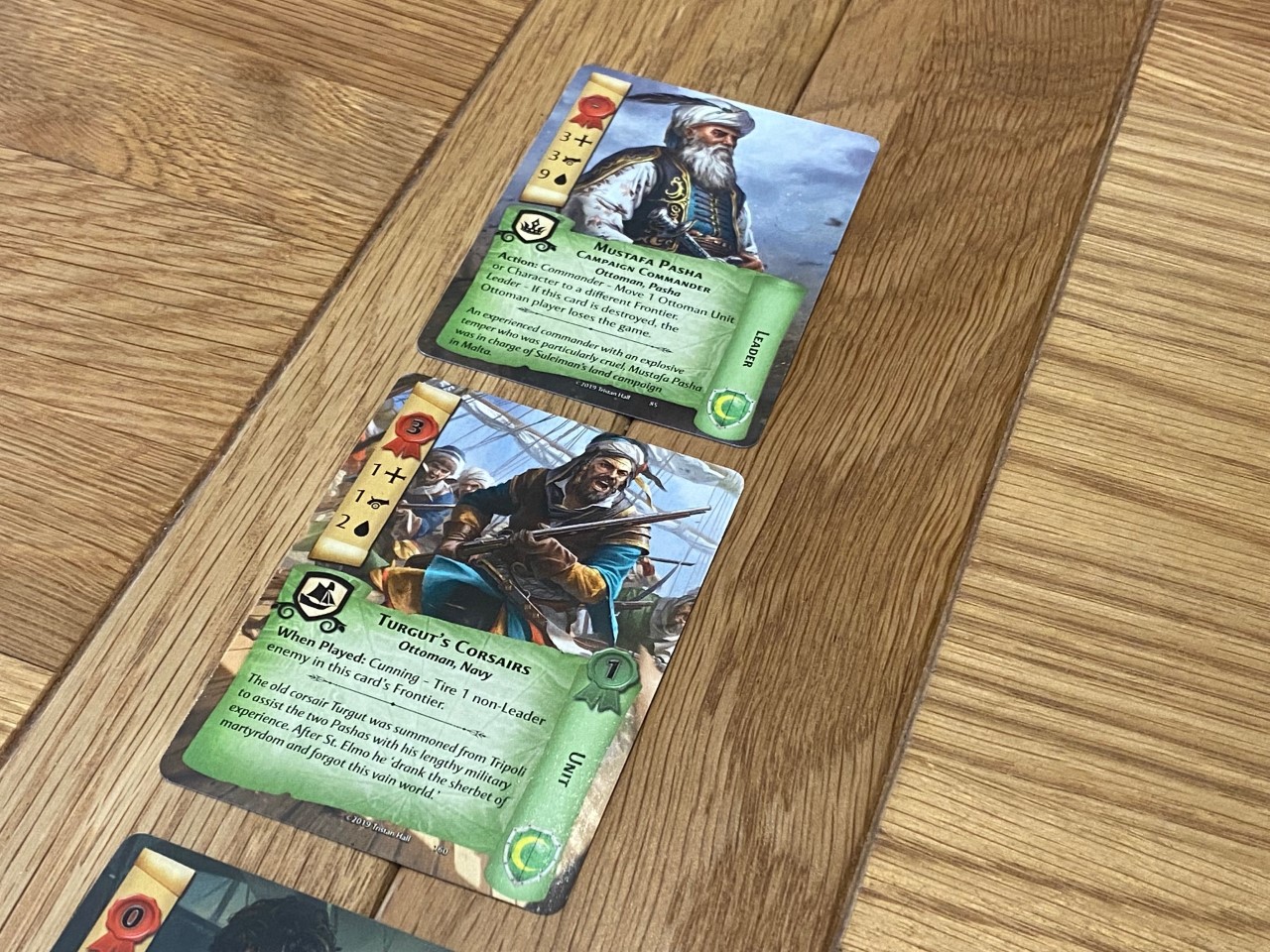 One thing that takes quite a bit of mind-bending to get your head around is the fact that even though these objectives must play out, and that they span fifty years, the two sides will face off on either side of the forts from the outset, and can attack each other. Thematically, this represents the many skirmishes and minor conflicts that take place in parallel to the events described in the objectives. This is the same as in 1066, but with a much longer time period to span, it feels a tough sell and I had trouble explaining it credibly to other players. 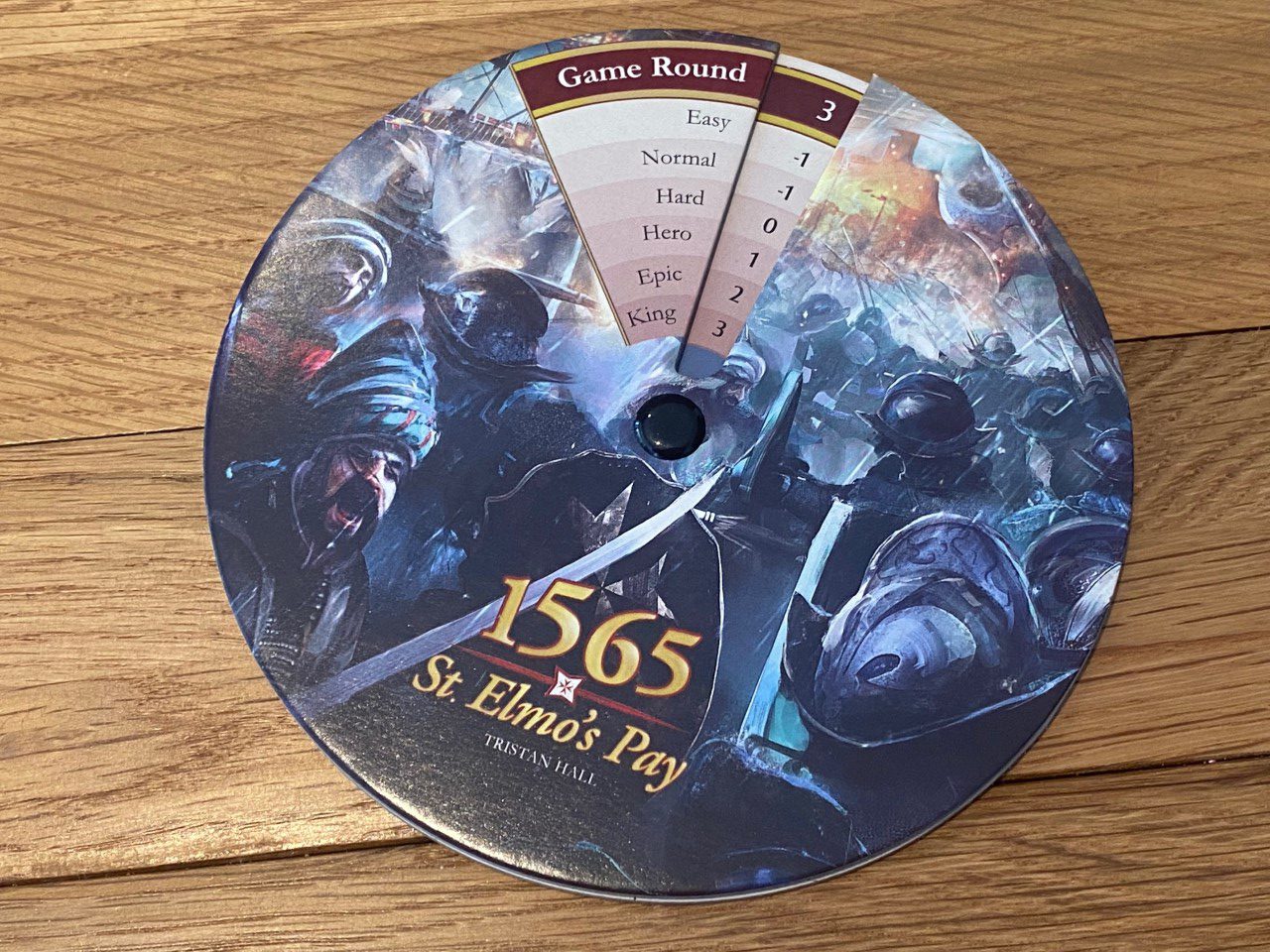 The mechanics also seem a little simpler here, with cards having one or two abilities each with simple keywords. It may be because I’ve got used to this after playing so much of 1066, but I had far fewer teething problems getting used to 1565: St Elmo’s Pay which again is nothing but good news. The solo system also works extremely well, and the AI mechanics are simple enough to remember off by heart within a few turns.

Fans of 1066 will definitely enjoy 1565: St Elmo’s Pay, and the interchangeability (which I have not tried) between the two games will surely offer a reason to add the second (and third) games to your collection, even though the mechanics are very similar. 1565: St Elmo’s Pay is a retheme, rather than a revolution, but it’s a great game in its own right and a worthy successor. The story it tells is rich and interesting, and as with 1066, it educates the players in a lively and interesting way

You can purchase 1565: St Elm’s Play on their Game Found page, along with a bunch of add-ons.