If I have said it once, I’ve said it a thousand times — real time board games are really not my thing. Do you know what is even more not my thing? Relatively complex real time games. As you’ll recall from my review of Pendulum, I sometimes struggle to work out what the real time aspect even brings to a game. In Project Elite, however, the real time element is designed to add a frenetic pace to what might otherwise be a relatively mundane dungeon crawl.

Because it’s a real time game, Project Elite has no choice but to keep things relatively sensible. Unlike in turn based games that also feature maps, hordes of aliens/zombies/robots, there is no complex mission set up — instead, the players just choose a difficulty level (from easy to really hard) and then a mission focus. Missions include demolition duty, capturing aliens, or plain old extermination among others. 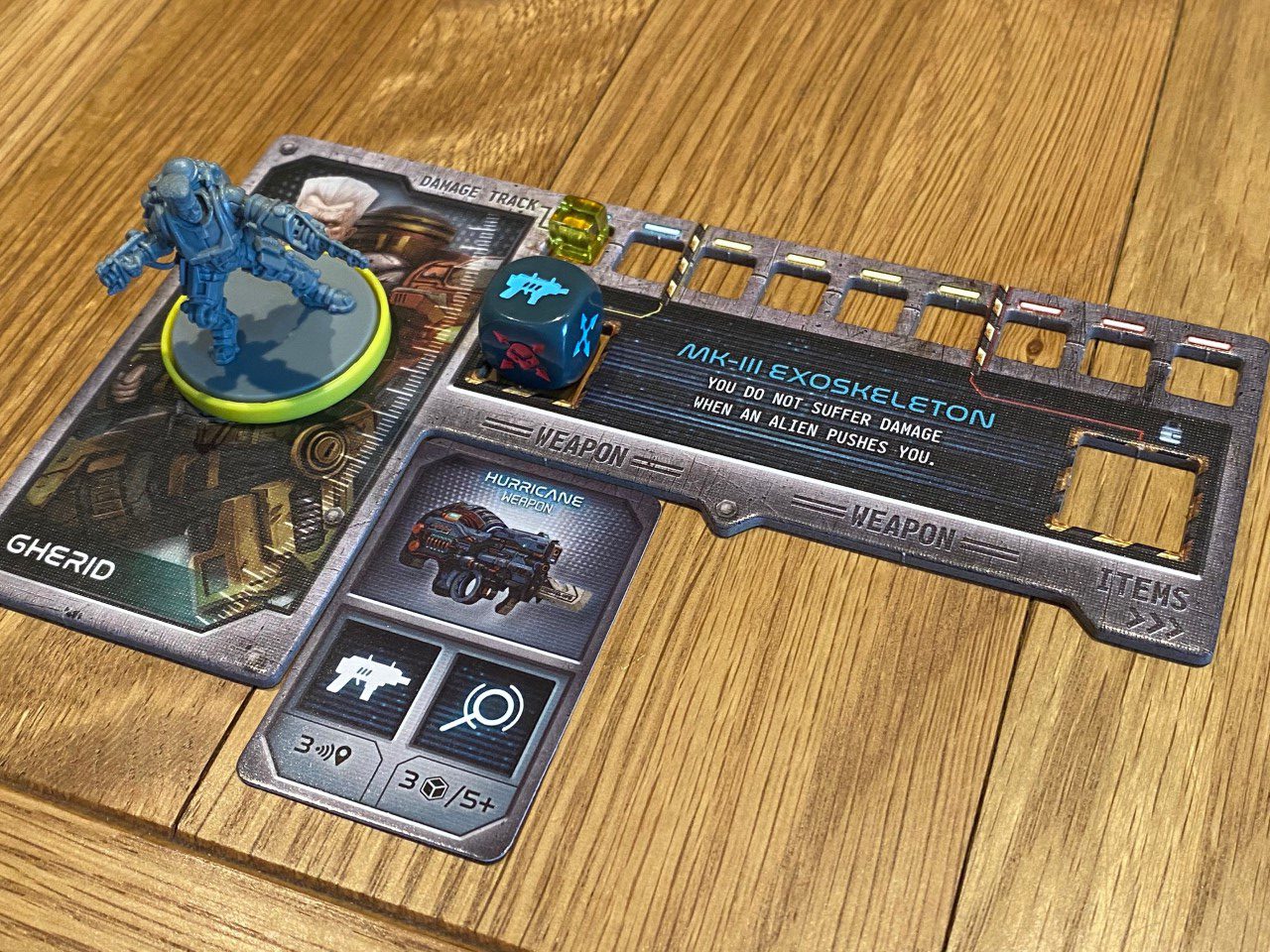 These missions are set up on the same double sided board each time, with different numbered spaces acting as the placement locations for your objectives. Once the game is set up, you’ll never need to refer to the mission page again — these objectives have no story or theme, and each one is largely self-explanatory, as I’ll explain in a little bit. All you really need to know is that one to six players will all work together towards a single objective, and if anyone dies or the enemies reach your base, you all lose.

And yes, I did just say that this is a six player game — right out of the box — and that, in itself, is a good thing. Very few games of this weight, size and impressive table presence will support such a high number, and because this is a real time game, it never gets any longer or shorter. Obviously, I’ve never played it with six people of course (because who would ever do that) but I do like the idea that at some point in the next twenty years I could, if I wanted to. 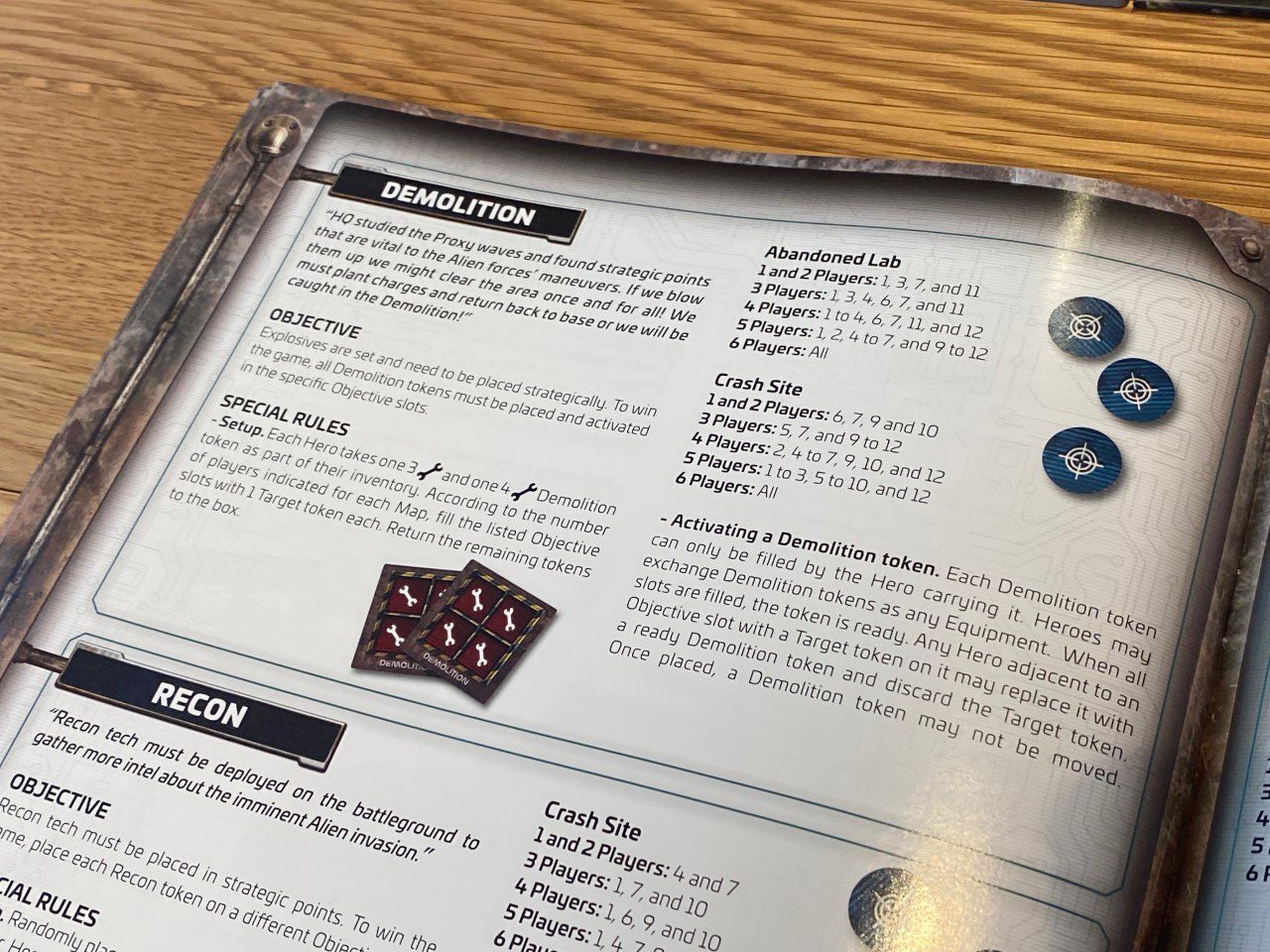 Before I go into some of the other meatier bits of this game, I’ll just briefly mention the solo mode here — just in case anyone is still locked down and looking to get their real time fix. In short, when played solo, Project Elite plays more or less just as it does at two players, with the difference being that the one player controls two characters and rolls one extra action dice, but with the ability to take actions with either character. The only thing is, Project Elite in solo mode is awful – and practically impossible.

In terms of how Project Elite plays and how you’ll achieve these objectives, well, it’s basically a dice game. Each player receives a number of action dice (usually four) and a number of hit dice. Everyone picks a starting weapon and then slots it into the dashboard that matches their chosen miniature – and in the base game there are six characters to choose from. 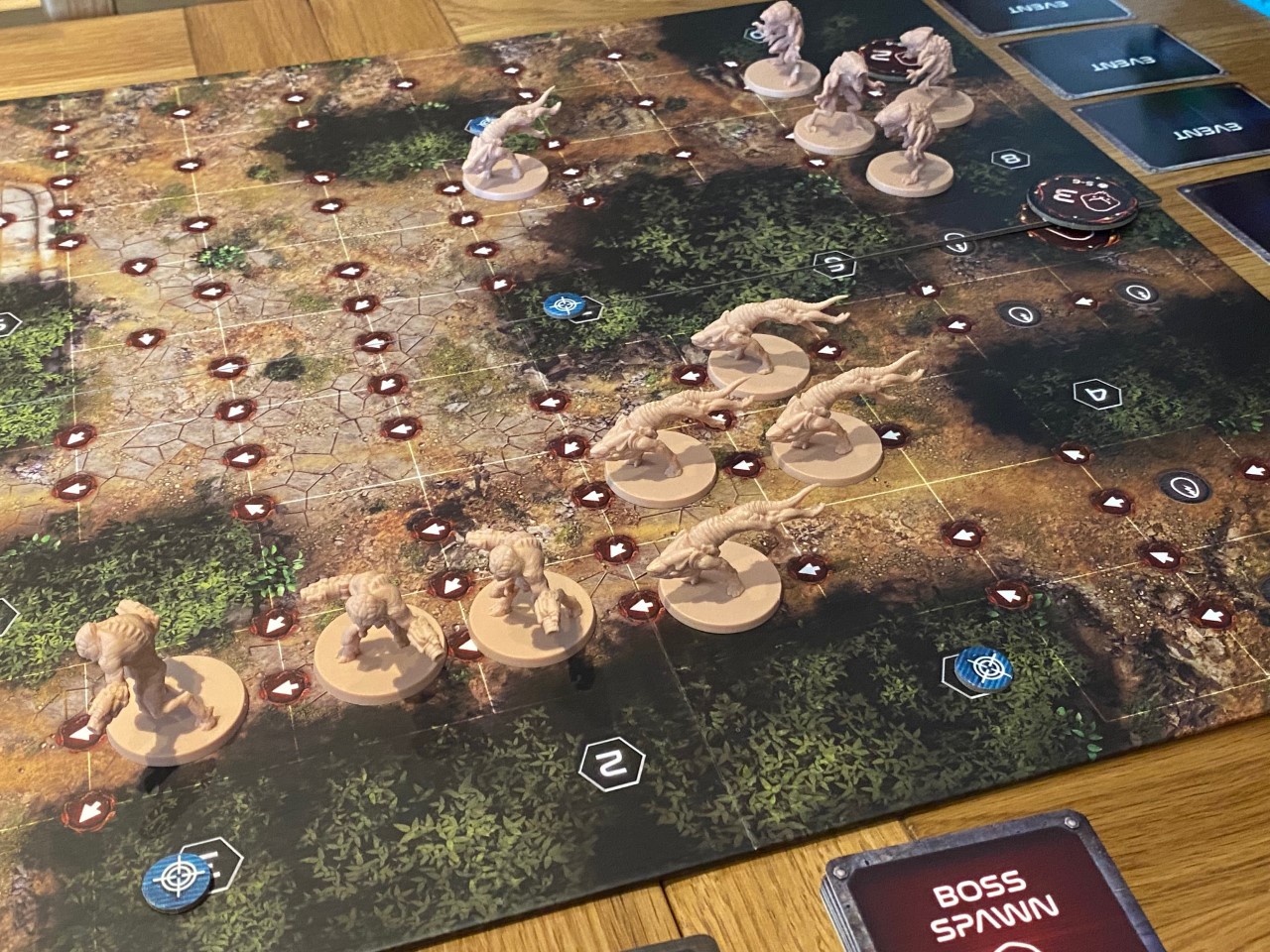 On each turn, the players will simply set a timer to two minutes (a digital one is included in the box, and there is also an app) and then start rolling. Every dice has a different face, and these will be used to move, search, attack, complete objectives and advance the alien threat that is already on the board.

Most weapons have two spaces on them, each showing a symbol such as a gun, a spanner or a magnifying glass. As the game progresses, players may search for and find new weapons and even alien artifacts, and these better items have more interesting abilities, but otherwise work in the same way. In short, to fire any weapon, a player will need to roll dice to match the symbols on their weapon – locking each dice in as it’s rolled. 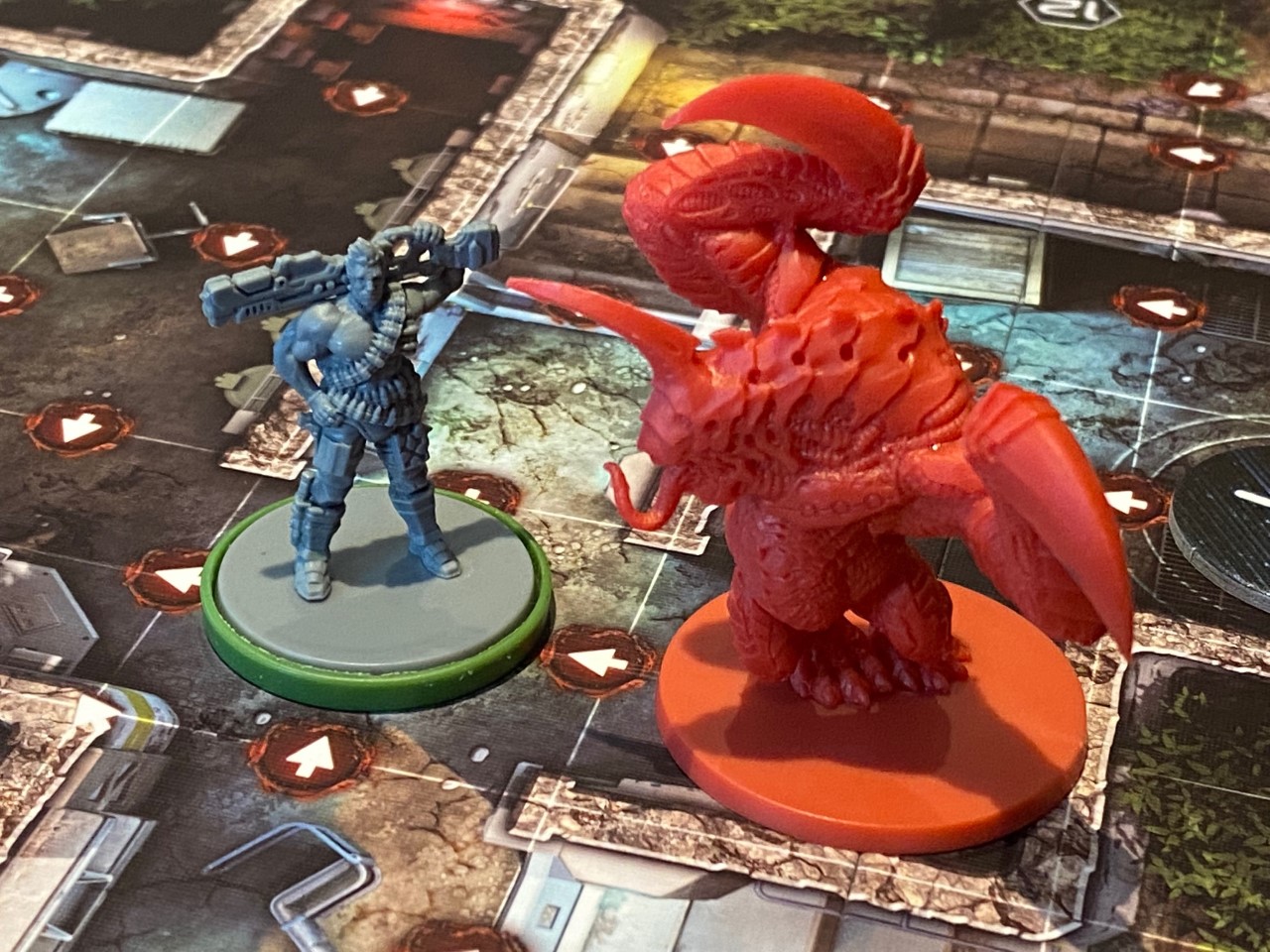 Every weapon has a range (such as one, two or three) and then a hit rating — five plus, for example. When you do lock in your dice to shoot, you will then roll the number of dice your weapon shows, scoring hits for every number over the hit rating of your weapon. Enemy grunts die in a single hit, bosses (of which there are a fair few in the box) take several hits to kill.

Also on your dice are movement symbols, each allowing the player character to move one space, and search symbols which allow you to flip a search token over, take three cards from the search deck and keep one – or to retain the search token until the end of the round to then search without the same time pressure. On the downside, however, each die also has a red face. Whilst all other dice can be rerolled immediately if you don’t wish to use them, any red faces must be resolved — by moving an enemy one space towards your base. 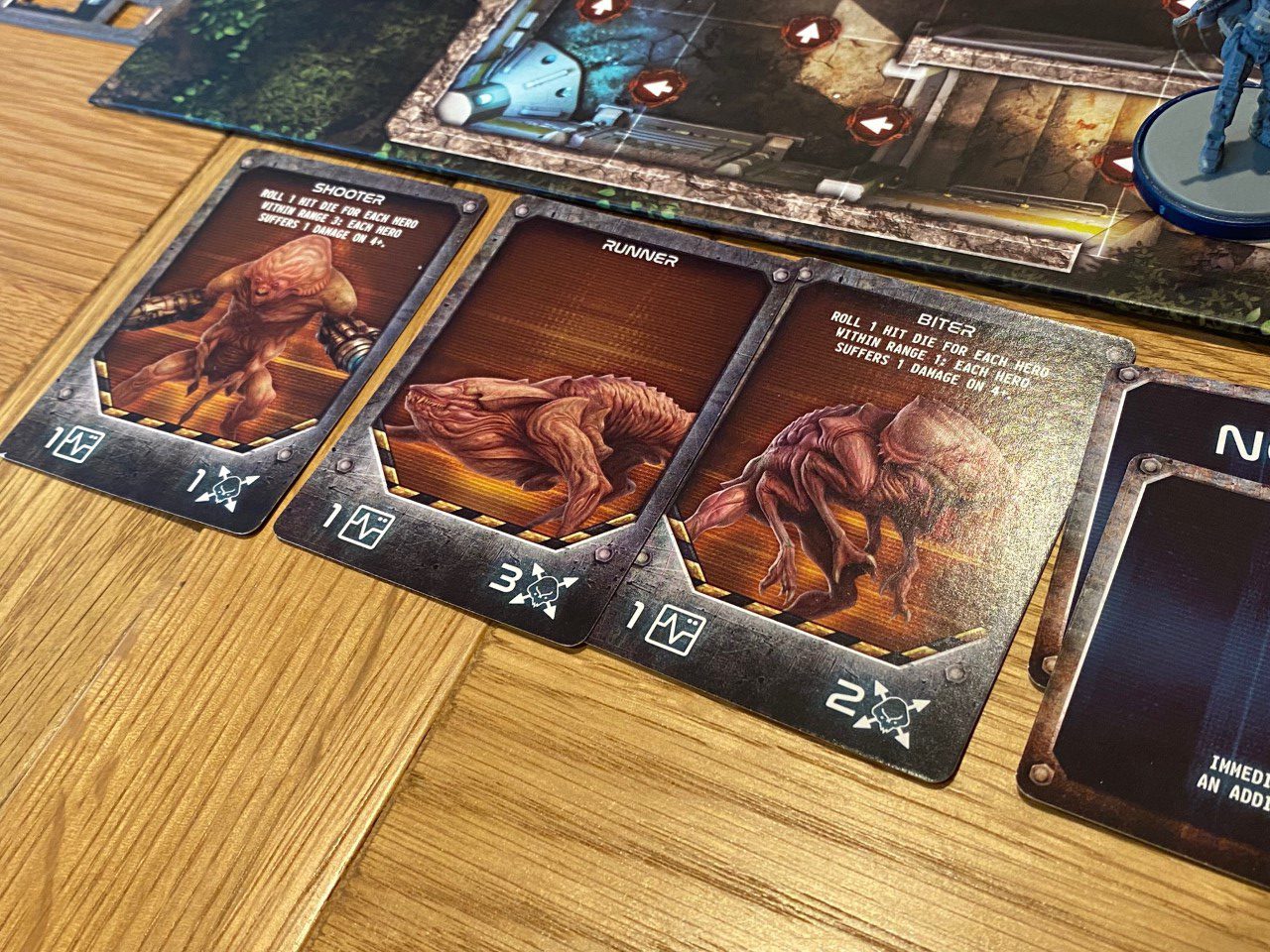 After a turn — which always involves frantically rolling, re-rolling and rolling your dice over and over again to try and advance towards and resolve objectives, whilst also blasting aliens — the aliens activate. Assuming some will have moved closer to you during the player turn, the biters will bite you, the shooters will shoot you and the runners will sprint forwards to bite you. Then, more aliens spawn — two or three cards worth, perhaps totally as many as twelve more enemy models, followed (as often as not) by a boss alien.

This relentless tidal wave of enemies appears at one of three spawn points, and there’s no control over it — you draw from a deck, and enemies appear as shown on the card. Because these enemies then follow a relatively set path (with some ability to influence from the players) there can be occasions where enemies completely overrun one side and leave the other more or less untouched, you just never know. You may also see five bosses in a row, or none —  again, it’s completely random. 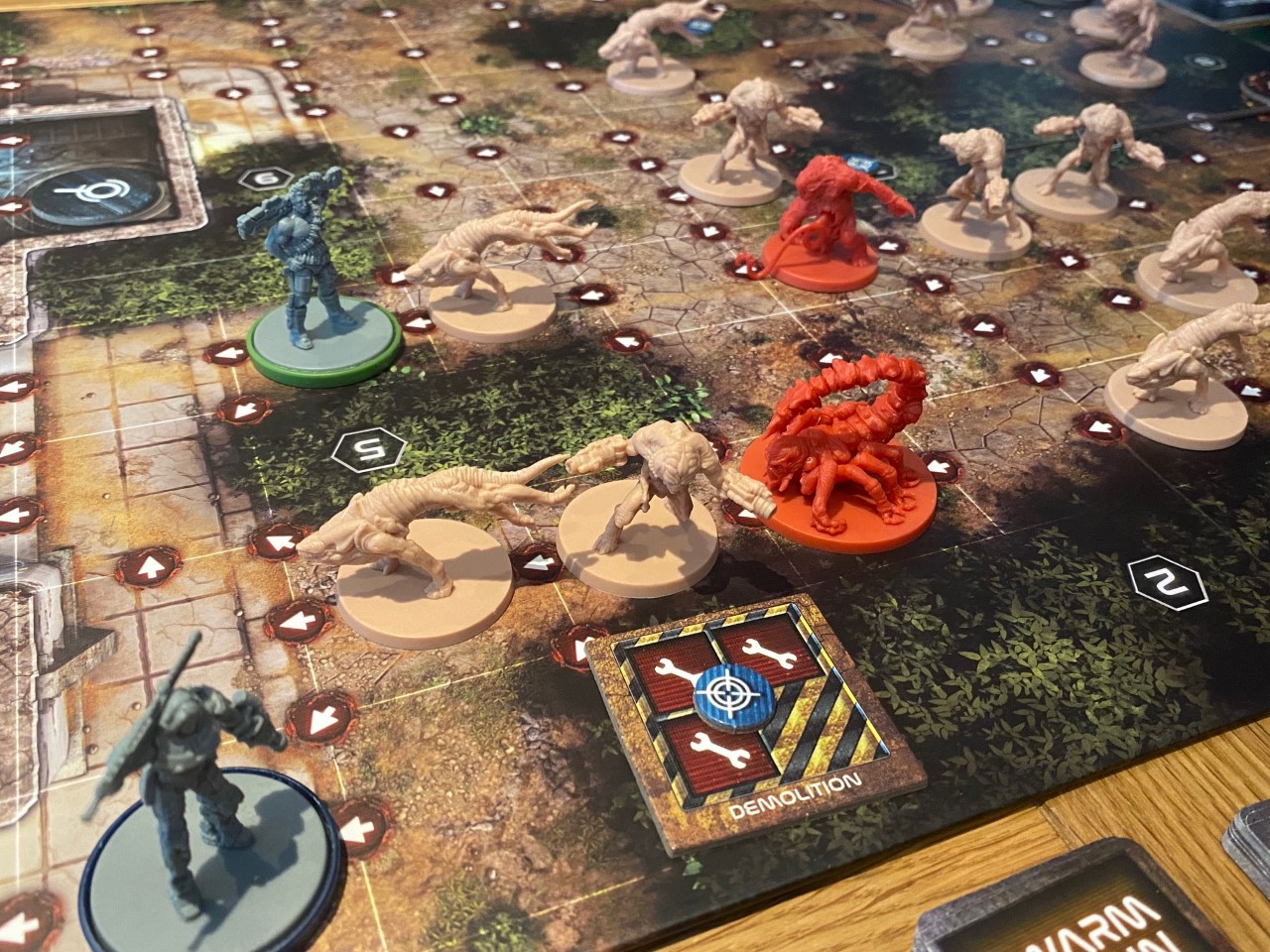 At some point one of three things will happen — either someone will die, or the enemies will reach your base, or you’ll achieve your objective (and escape.) Winning Project Elite in solo mode, or at two or three players is very hard — virtually impossible when playing solo. Three to five players do stand a chance, but three is much harder than what I imagine five would be like, and that’s simply because you have fewer people rolling fewer total dice, and therefore fewer ways to make things happen on the board.

The good news, perhaps, is that whether you win or lose, Project Elite is pretty much time bound to sixty minutes or so. This is a game that almost always finishes before it outstayed its welcome, and I think the only sad thing about that is that it does more often than not end in defeat for the players. 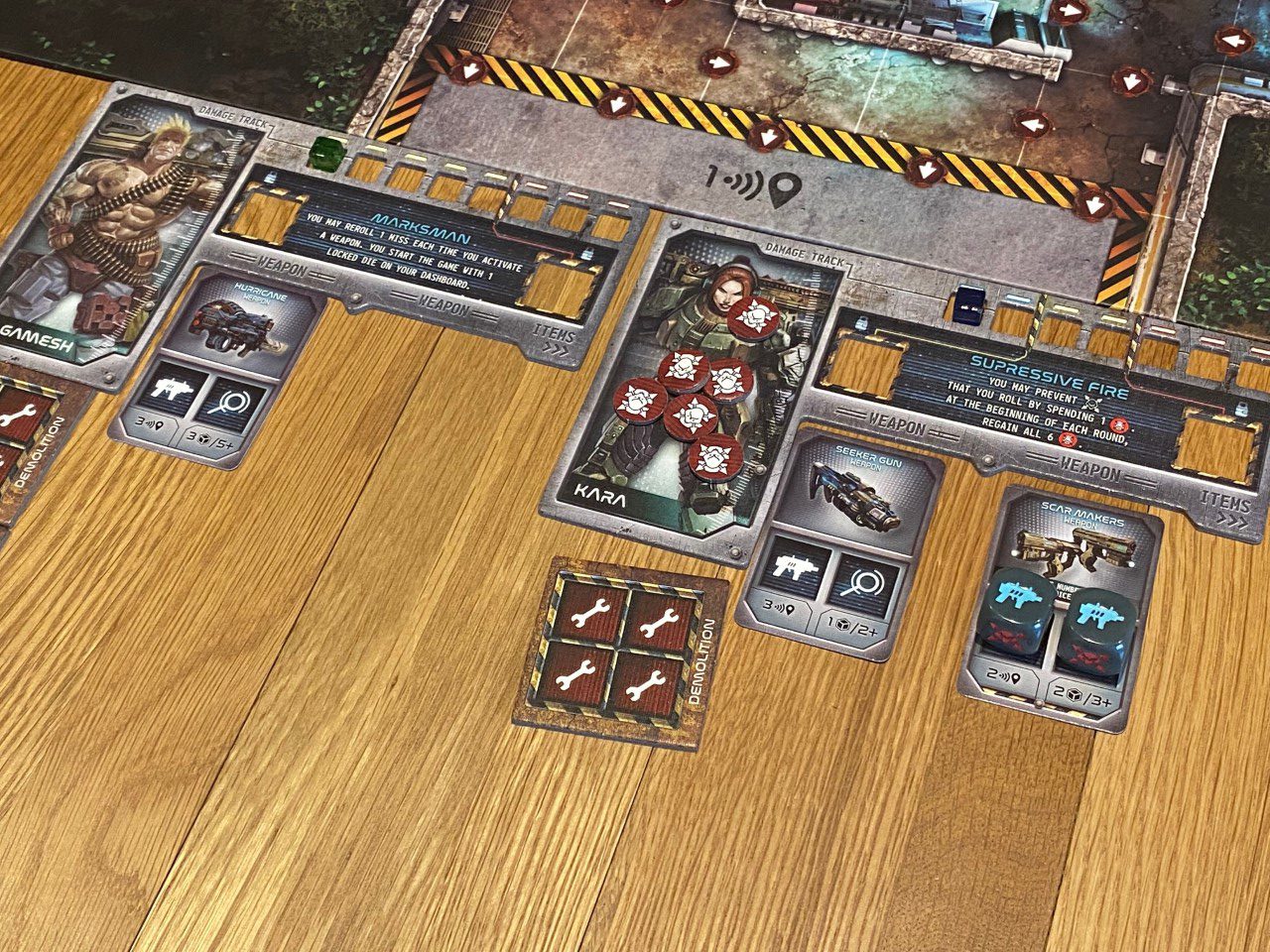 Like Pendulum before it, Project Elite does not do enough to convince me that real time games serve a particularly valid purpose, but also like Pendulum, it isn’t a bad game. Building a real time gimmick around a simple, sensible and upgradeable (through items) dice-for-actions mechanic is something that works well in the real time context, and you can sort of imagine the characters frantically reloading or priming explosives as the alien threat bears down on them.

All the same, I don’t think I’ll get much more mileage from Project Elite personally, and it’s a big, expensive game to have sitting on your shelf. There’s some appeal here for people who think board games are too slow — or boring — and are looking to spice things up, and I could imagine players in their teens enjoying some of the more adrenaline-packed moments. Project Elite is a worthy effort, but it’s not a fantastic game, sadly.

You can get Project Elite on Amazon.