Tighten your loincloth! Lace up those sandals and pick up that spear! And get ready to run for the hills! It’s time for some ancient Bronze Age warfare in Troy Mythos.

A year after its release on the Epic Games Store, Total War Saga: Troy has released on Steam in its fullest form, complete with a new, full imagining of the game titled: Troy Mythos: A Total War Saga. A Total War game is often a hulking, shaggy beast of a war game, twisted so full of systems, scenarios and units that it can be difficult to grasp at a glance the sum of its parts. And, as its post-release name change hints, that’s the case here with Troy. 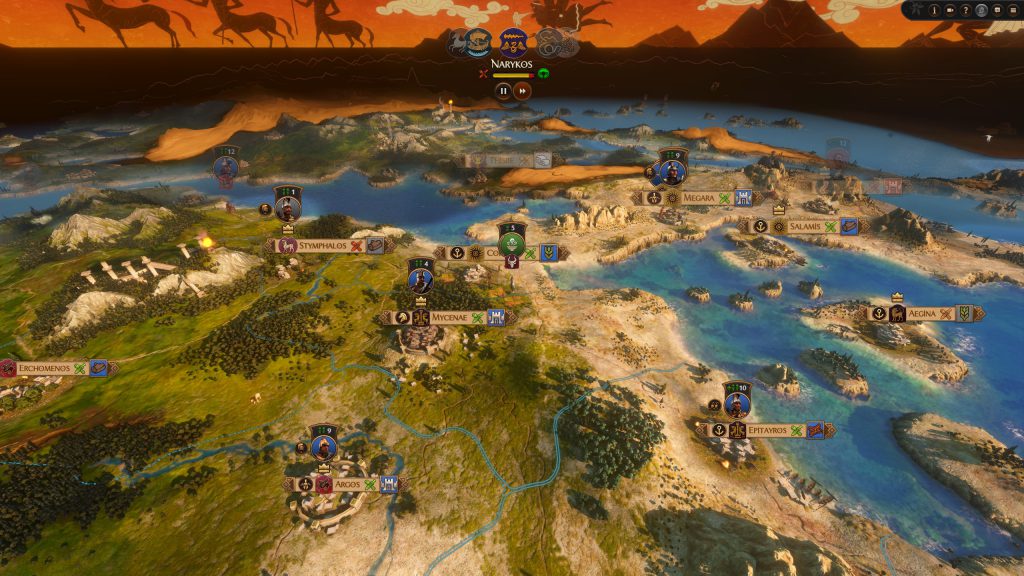 The original release took the known history of the Trojan War and combined it with the story of the Illiad, while subtracting mythical elements, attempting to tell what the developers called the “truth behind the myth”. This approach offered the stark opposite of what players experience in the Total War:Warhammer titles, which are full of magical units and abilities. Total War Saga: Troy subtracted the myths of ancient Greece, and generally substituted all mythical beings with large, hairy men who were uncommonly strong and deadly.

But with the arrival of Troy Mythos the myths missing from the original release are now all here. Fantastical beasts such as Cerberus, the Hydra, Centaurs, Harpies, and perhaps even the Cyclops can be recruited for battle, and the campaign map now looks suitably mythical with Homerian illustrations and silhouettes. Although marketed as DLC for the original game, in many ways Troy Mythos feels like a full featured 1.0 release of a game that was previously in early-access. And while it still has a lot of annoyances familiar to anyone with experience with these games, it looks fantastic and is a lot of fun to play. 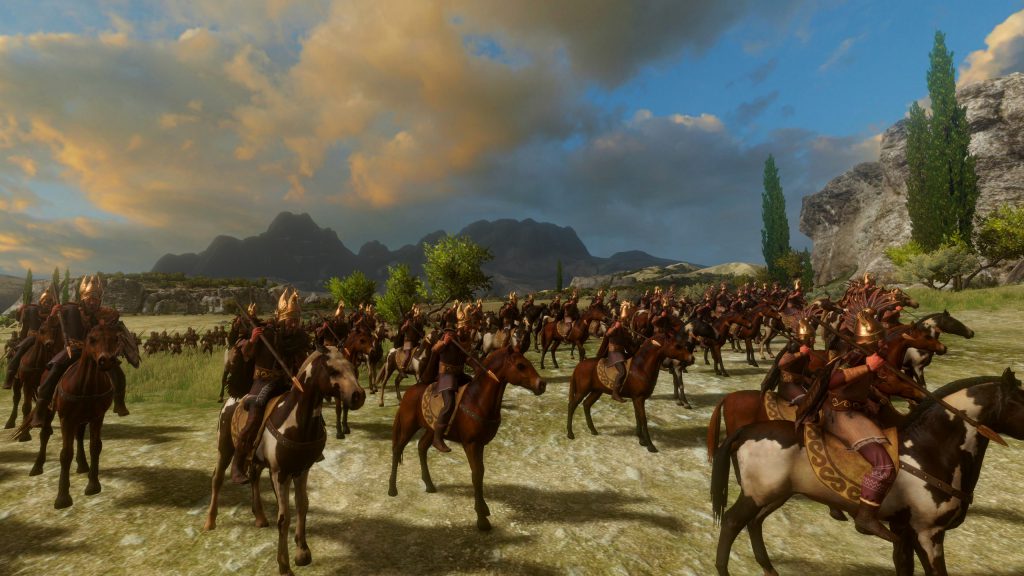 But what if you don’t have any personal nostalgia or knowledge associated with the Total War franchise and want to know what it is? Well, it’s a long-running war game series that combines turn and map-based strategy with real-time strategy battles. You make allies and enemies, you defend your territory and plot domination, all while building up your forces, going to war and causing chaos. New entries in the series often introduce new elements and mechanics, and often with varying degrees of success. Troy Mythos is unique in its attempt to smoosh as many recent Total War elements and mechanics together into a world map that is so large that most players will probably never see all of it.

It’s to the game’s credit that it is such a pleasure to play even while it is bursting at the seams with systems. The factions each have unique mechanics that change how they play. Agamemnon of Mycenae , for example, can create vassals and appoint generals to his board of advisors, while Menelaus of Sparta has the ability to colonise distant settlements from afar. 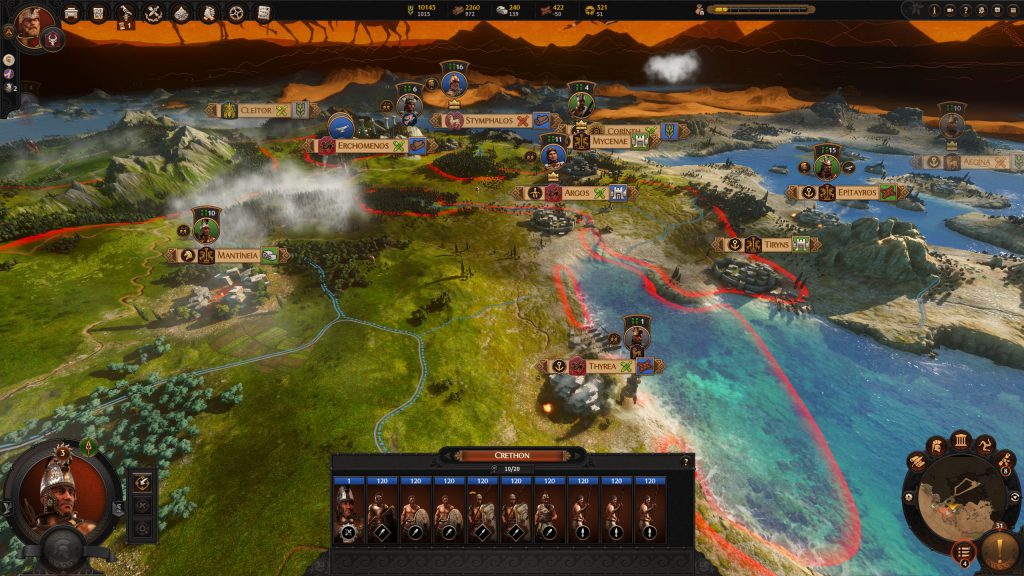 The heroes themselves have skill trees and can be assigned items. The game has a resource system that is on top of the settlement management upgrade tree and interacts with the trading and diplomacy systems. There is an entire system for worshiping nine distinct Greek gods via offerings, and through the building of temples, which each allow for the recruitment of a priestess who can make offerings for her specific god. There are additional agents that can be recruited to spy or manage settlements. The game is constantly giving you new missions and goals, which pile up on top of whatever strategy you’ve chosen to take yourself.

And now Troy Mythos adds two new further additions: an administration system and mythic quests. The administration system gives an administrative cost to units. As you move up the administrative power bar, on the top right hand side of the screen, your costs increase and balancing your empire becomes more difficult. This is intended to check the snowballing effect of the player building up an overpowering army in the later half of the game and auto resolving all battles on her steady march to victory. The mythic quest system gives you the opportunity (if you have sufficient resources) to send off an expedition party out to encounter one of three mythic beasts. After you do this the game will periodically offer you a narrative with choose-your-own adventure style quest options that ultimately lead to a big climatic battle against the beast that you are attempting to win for your roster. 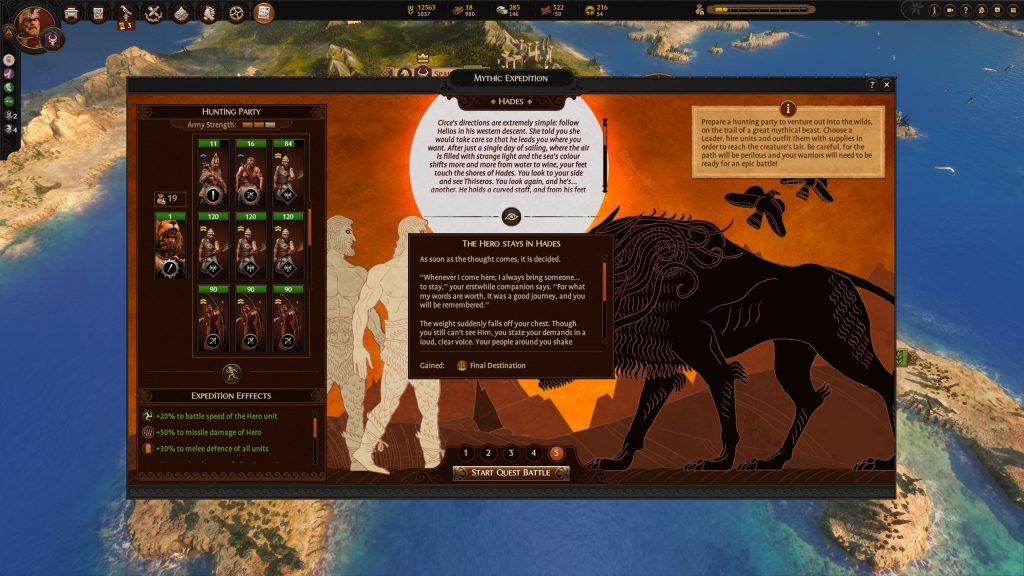 This is a nice touch and these beasts–the Hydra, Cerberus, or the Griffin, each have their own upgrade trees and allow for new buildings which further increases and effect their stats. Mythos shows a possible way to combine a historical setting of a traditional Total War game with the fantastical creatures found in the Warhammer games and it works. The mythic beasts are, of course, completely overpowered but in a way that feels fun. In addition to this, there is also the possibility of recruiting other, smaller mythical units after you defeat small armies affiliated with them who pop up in your territory within the first few turns.

All of this adds up to a game that is very easy to lose yourself in, playing turn after turn, attempting to build up your strength and conquer more of the map. Without a doubt, my favourite part of Troy is its big-picture narrative structure that helps to guide early-game diplomatic decisions. After 50 turns or so the Achaean factions tend to have solidified into a more-or-less united force that goes to war with Troy. And then the game becomes a spectacle of charging into battle in the middle of this enormous conflict. This allows you to make strategic diplomatic decisions early on, giving your run a sense of direction. 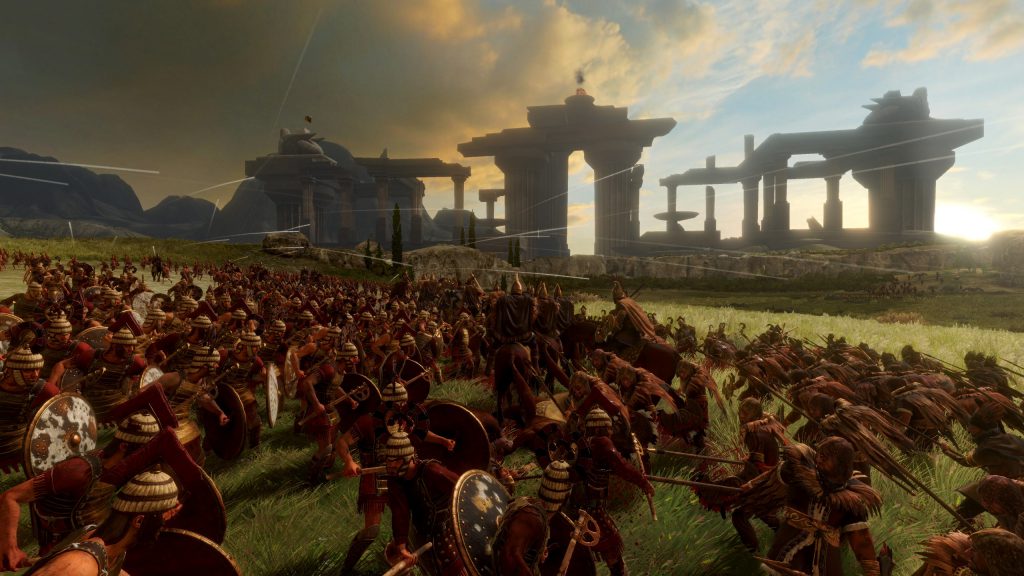 The problems from past titles in the franchise are still here. It turns out walls were a very effective defense in the Bronze Age. Sieges remain decidedly no fun and I will do anything I can to avoid having to play one out. Maybe Creative Assembly should consider adding a simple puzzle matching game over on top of the auto resolve option, to complicate the mindless clicking of auto resolving in future titles? Does anyone like playing a siege? One more additional layer of gamification in this micromanager’s paradise couldn’t hurt. Just please don’t make me march my troops up to the walls again!

The AI is also a little annoying when it comes to trading propositions. At the end of every turn you wait to see what strange suggestion the AI factions will make. Mine seemed to possibly glitch. For over thirty turns I was offered various amounts of wood for 1 gold and 36 stone, again and again. 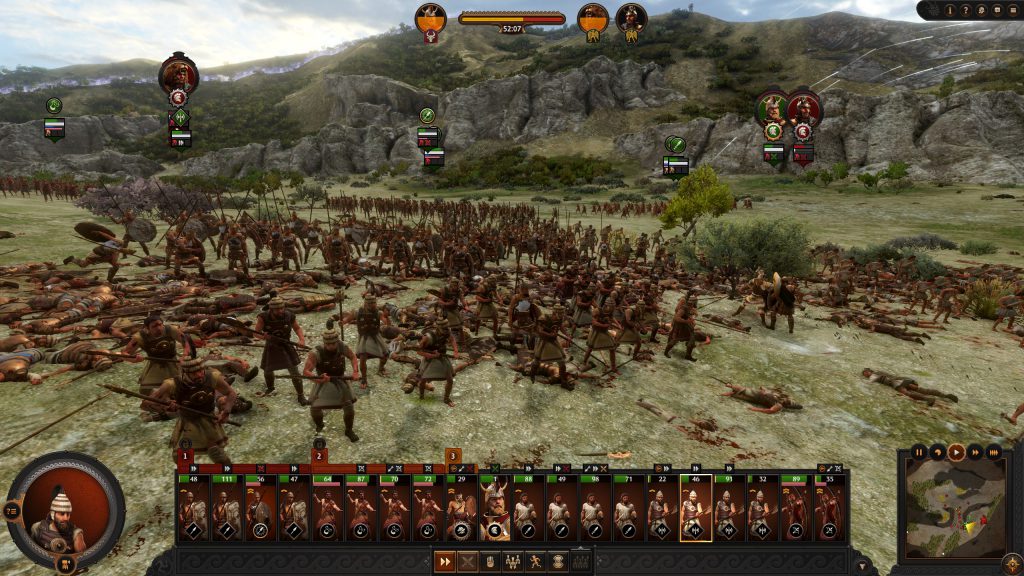 But neither siege battles or the trading AI should stop you from setting sail around the islands of Greece if you are looking for a new Total War adventure. Troy Mythos: A Total War Saga is a much appreciated improvement upon the game released one year ago and feels like the arrival of a game that has ironed out many early-access wrinkles. The addition of mythical units makes conflict in the Aegean more compelling and fun, and the game’s polish suggests great things coming in the future from Creative Assembly’s Bulgarian office. I don’t know if I would recommend this as someone’s first Total War experience, but it fully delivers in creating an enjoyable and challenging strategic conflict on a massive scale that is highly replayable and suitably epic.

Troy Mythos: A Total War Saga is available on PC.

Generals & Rulers is as uninspired as its name

A Look Back at Total War: Warhammer 2