For fans of the novels that inspired it, Red Rising from Jamey Stegmaier and Alexander Schmidt will be a smorgasbord of familiar faces and subtle character traits baked into multi-use cards. For those who haven’t heard of Pierce Brown’s books (like me) the nuanced interplay between characters might be lost thematically, but mechanically, Red Rising is a fast, simple and attractive experience that still works extremely well.

In fact, I’ve enjoyed playing Red Rising so much that I think I’m going to invest in the books. I will admit, that’s only partly due to the game itself — which is actually quite theme agnostic — but nonetheless, it was the game that piqued my interest. The summary of the Red Rising plot is complex, but all you need to know to play is that humans colonised the solar system generations ago, and now live in a caste-based system made up of fourteen ranks ranging from lowly browns and reds, up to the glorious golds. 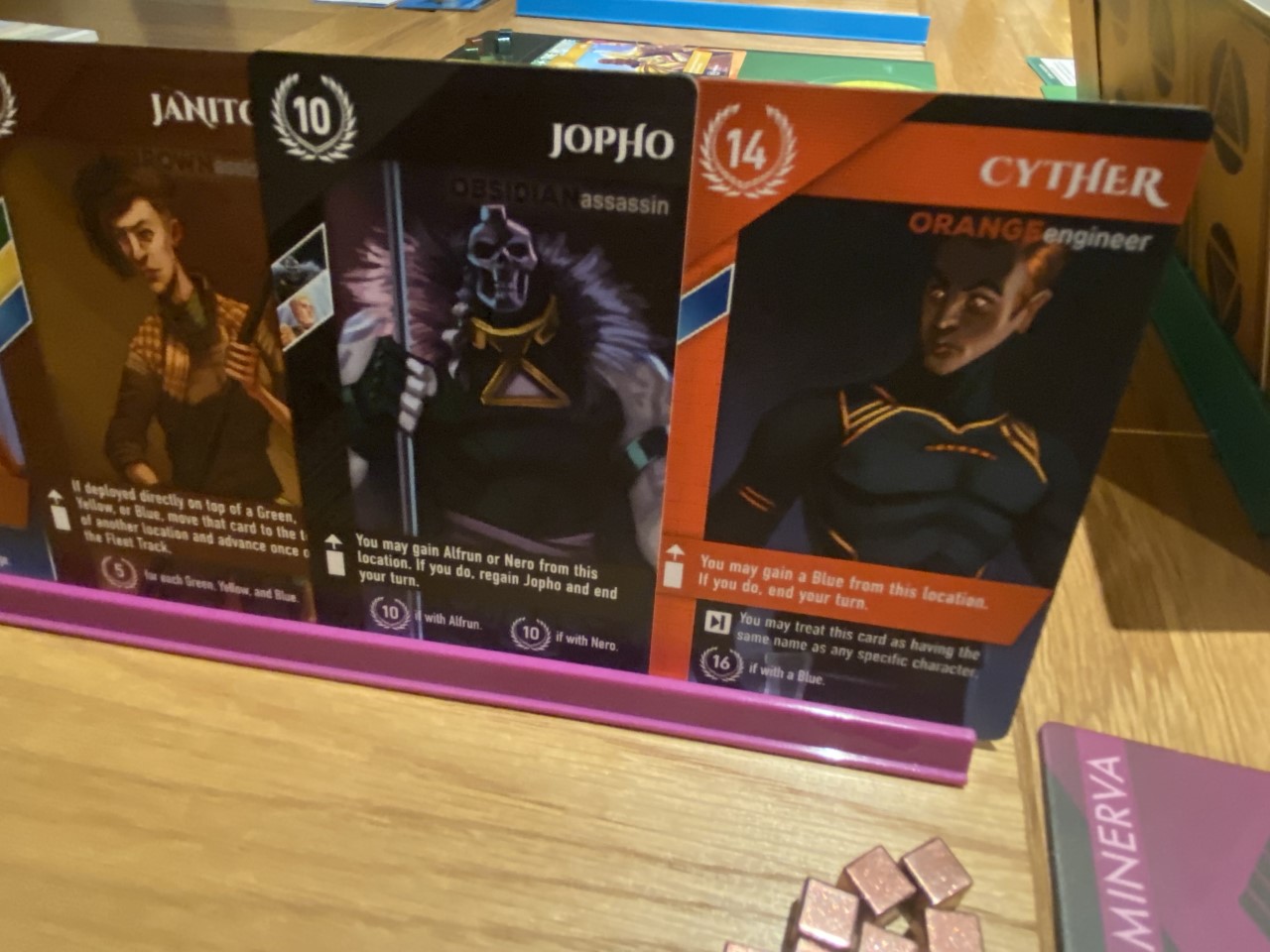 In the original novel, I understand that the story centres on one main character — a red — who fights against the injustice of the system he was born into. In the game of Red Rising, however, the players instead draw random faction cards (each with its own ability) and will then use cards from all of the coloured houses to advance whatever schemes they want their faction to act upon. 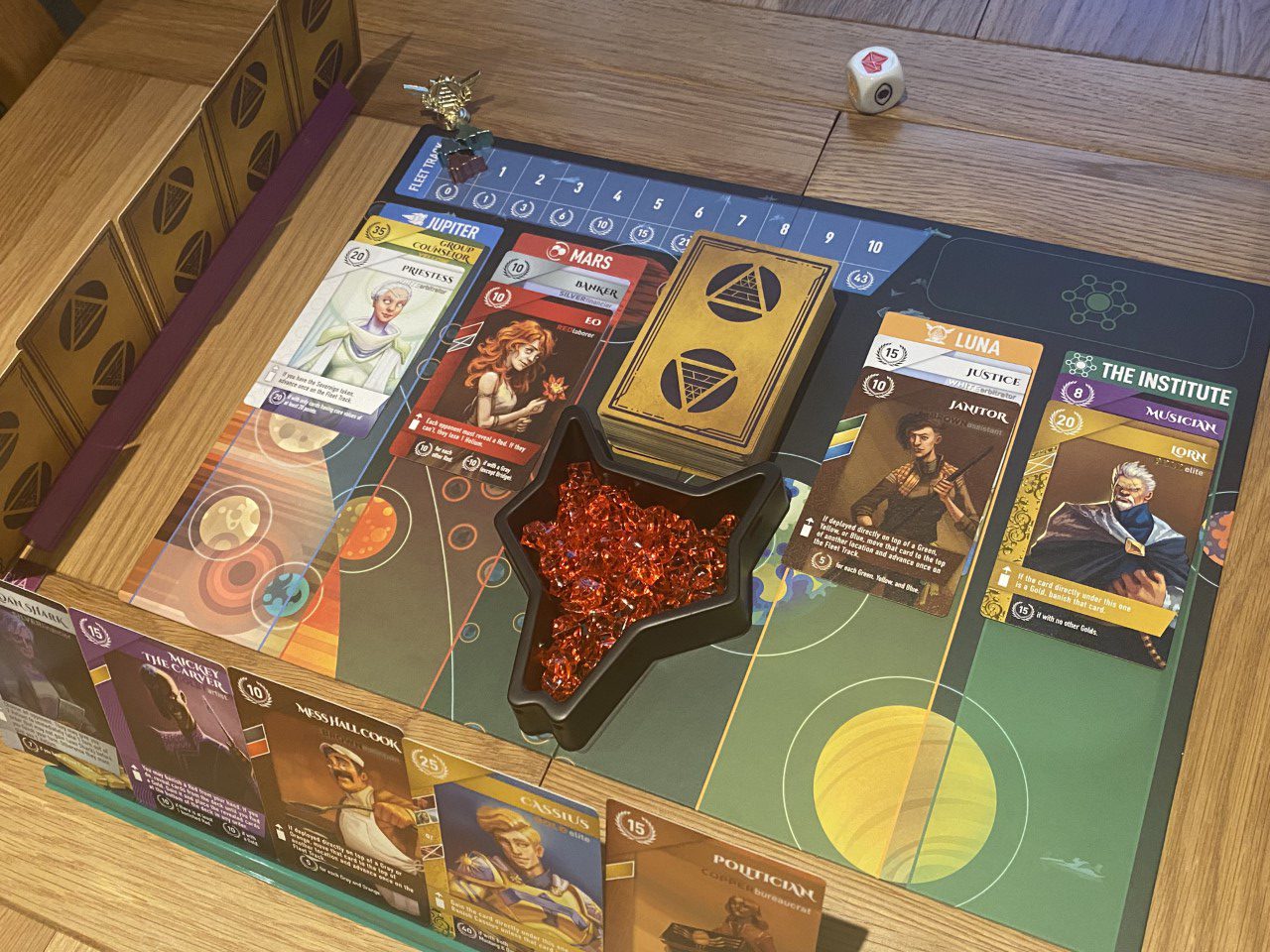 The objective of Red Rising is purely to score the most points when the game ends, and this is achieved partly through visible aspects on the table, but mostly by the cards in your hand when the game end is triggered. The game ends when three triggers are collectively reached by all the players, or when two of the same three triggers are achieved by one single player. These triggers are: Having seven influence in the Institute location, having seven Helium tokens, or reaching the seventh space on the Fleet track location.

The first thing I realised about Red Rising (aside from how daunting the amount of information that players must assess across the cards in their hand and on the board) is how quick the game is. These triggers are reached very quickly, and due to one of the key mechanisms in the game, each player will step closer to one of these goals on about 75% of their turns without even trying.

On a turn, the players have two actions to choose from. They can “Lead” which involves placing a card from their hand onto one of the four board locations (which will be pre-seeded with other cards during setup) or they can “Scout.” Most actions will be Lead actions, and when a card is placed using Lead, the player will follow whatever deployment instruction is printed on the card. For example, a card might demand that you “Banish” (remove from the game) a card below, or it might ask you to pass another card to an opponent and then draw two yourself, for example. 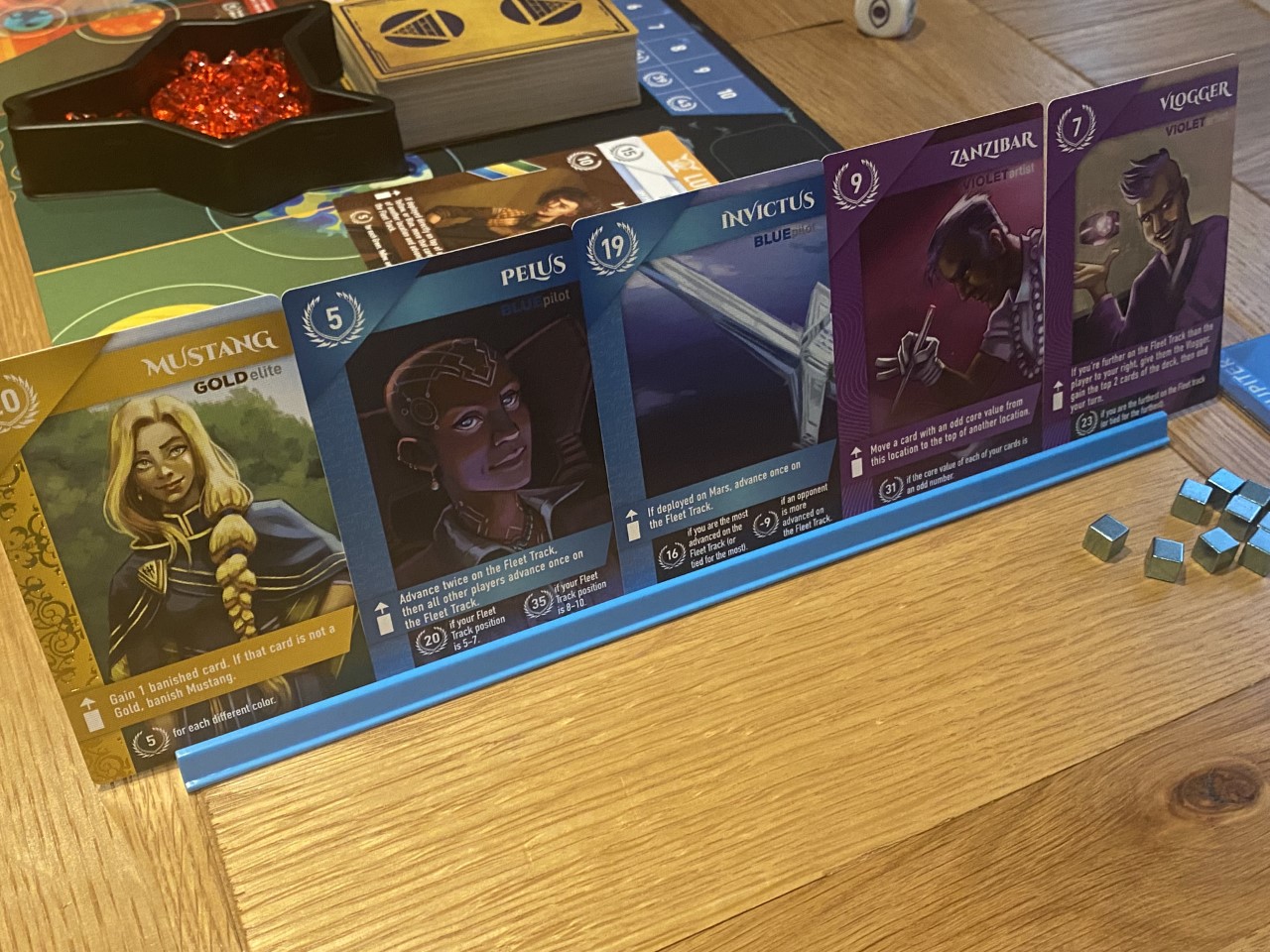 Red Rising has one of the largest decks of cards that I think I’ve ever seen, and as a result, the variety across the cards is vast, with many variations on deploy actions that affect the board, the player deploying the card, and indeed the other players. Direct, aggressive interaction is fairly infrequent, but some cards do force discards, trades or revealing of hands.

In addition to taking a card’s deploy action when played for a Lead action, the player will then choose one other location and take the top card on display there into their hand. Finally, they will take the benefit shown at that location – which includes moving one on the Fleet track, adding one influence to the Institute or drawing one Helium. The final location allows the player to take the Sentinel token, which usually activates their faction power. The reason I mentioned earlier that about 75% of turns advance the game, is because that’s the location power for three out of four locations.

Sometimes (just to break the maths that I’ve just explained a little bit) a player might choose to Scout, instead of to Lead. When Scouting, the player simply draws the top card from the face down deck, and instead of taking a location action, they roll the rising die — which includes all the same four bonuses as the locations, plus the fifth and sixth faces, which allow the player to banish any card, and to draw and place (not deploy) a new card onto any location. 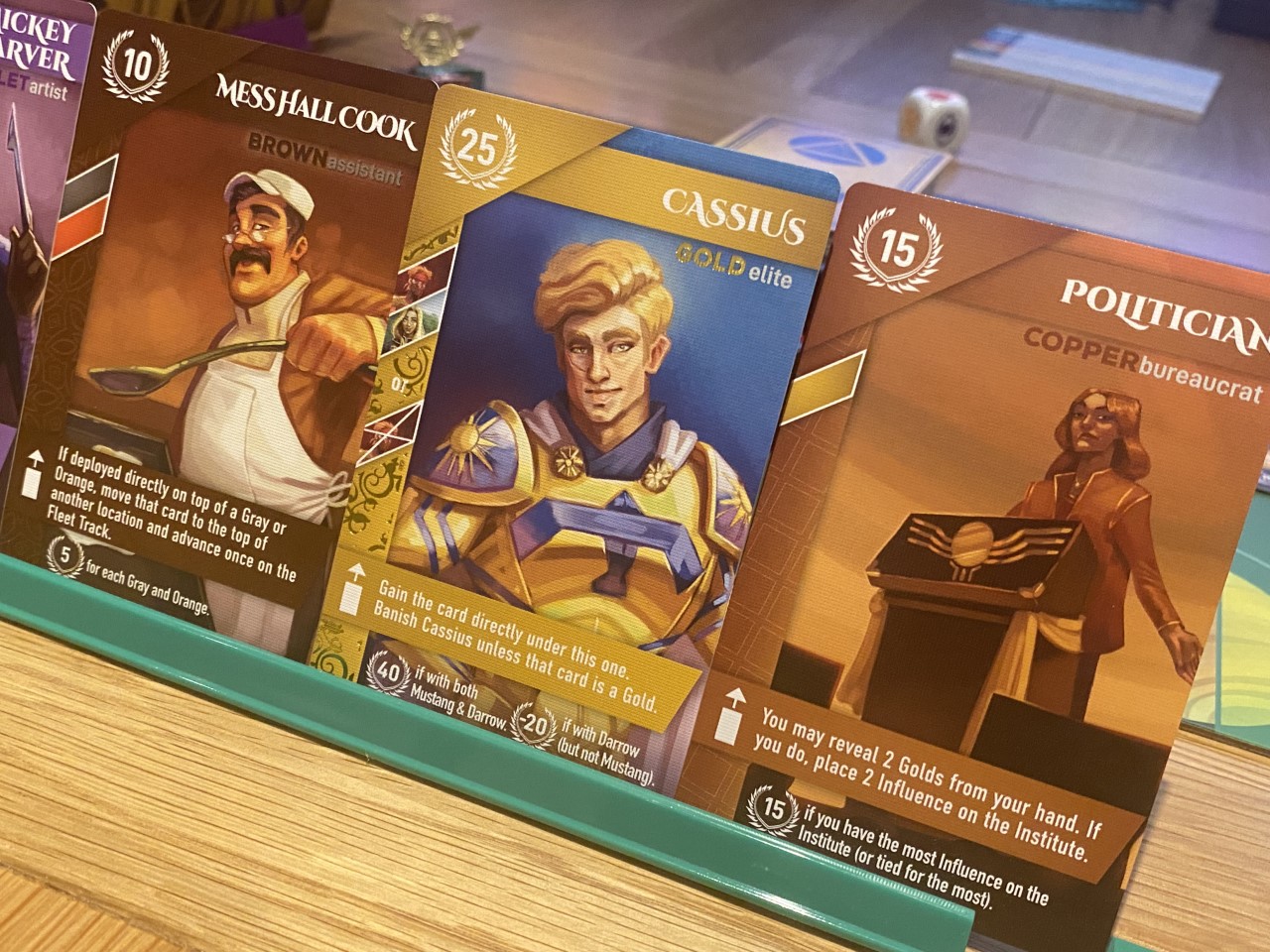 In general, players will choose to Lead rather than Scout, simply because the aim of Red Rising is really to assemble the most valuable hand possible. It’s fairly unusual to achieve a perfect hand at any point in the game, simply because it tends to rattle on at a fair old pace. Even if you do achieve a hand you’re happy with, there are enough cards and card combinations in the game that it’s always tempting to shift your strategy in the middle of the game, based on your own assessment of how long you have left, and what cards you think your opponents have.

Assessing your cards versus your opponents cards really is a big part of Red Rising because of how the scoring works. Each card has a discrete value — shown in the top left corner. In addition though, most cards have one or more additional scoring aspects that will be calculated based on other cards in your hand — for example assembling three friends from the novels might mean you gain a bonus ten points for each card. Equally, a card worth a huge amount of points on its own might come with a negative benefit, unless you can fulfil some tough synergy criteria.

Many cards have both powerful deploy and endgame benefits, which means that players will often want to play them for their benefit, but then somehow get them back later in the game. Other players will want to identify cards like this, or cards that do other powerful things that they cannot fulfil, and then use cards that Banish others to try and manipulate the board. 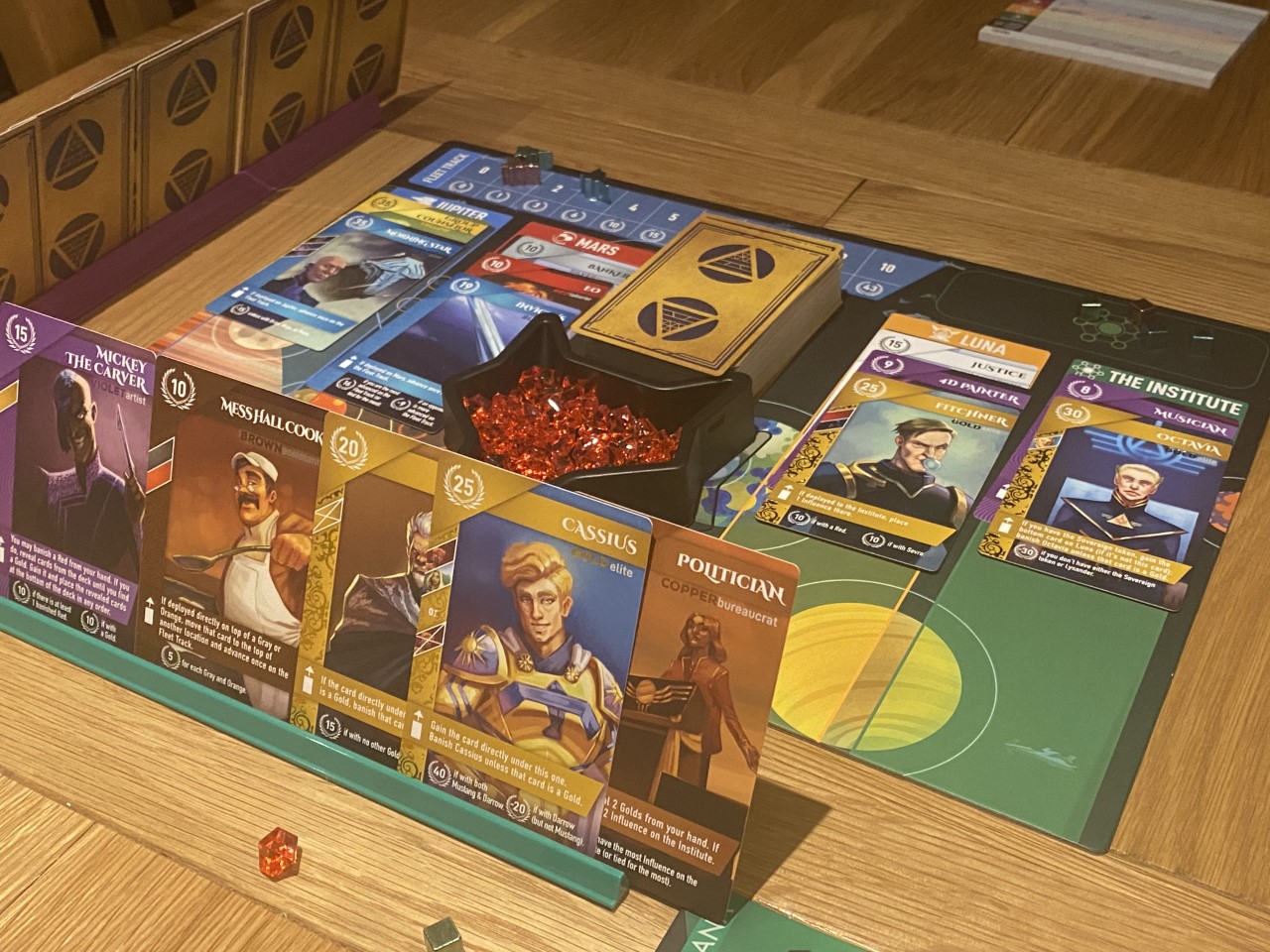 Because of the size of the deck, there is a fair bit of randomness in Red Rising and in many (I would say most) games, you won’t see the whole deck of cards. This has the positive benefit of meaning that no player can “settle” on a fixed strategy before the game even begins, and expect to execute it. On the downside is the other side of that same coin, which is that even after five or six turns, it’s hard to foresee what the best long term strategy will be.

Even despite this randomness, there is usually an opportunity within the cards you’ll see to work out a set of cards that will almost always feel decent, but which will rarely leave you entirely satisfied. This might sound like a bad thing, and I guess it probably is for super-optimisers and players who like complete agency, but given the theme and the way Red Rising plays, it feels just right here.

When boiled down then, Red Rising is a simple to learn, simple to teach experience that looks fantastic (especially in the Collectors Edition, which is what you see here) with the only downside being the fact that the metallic faction pieces are a little hard to differentiate (blue is very close to green, pink and red practically the same, etc.) More importantly, the fast paced and simple ruleset allow players to spend their time where it matters — on deciding which cards to take to pursue their desired strategy. 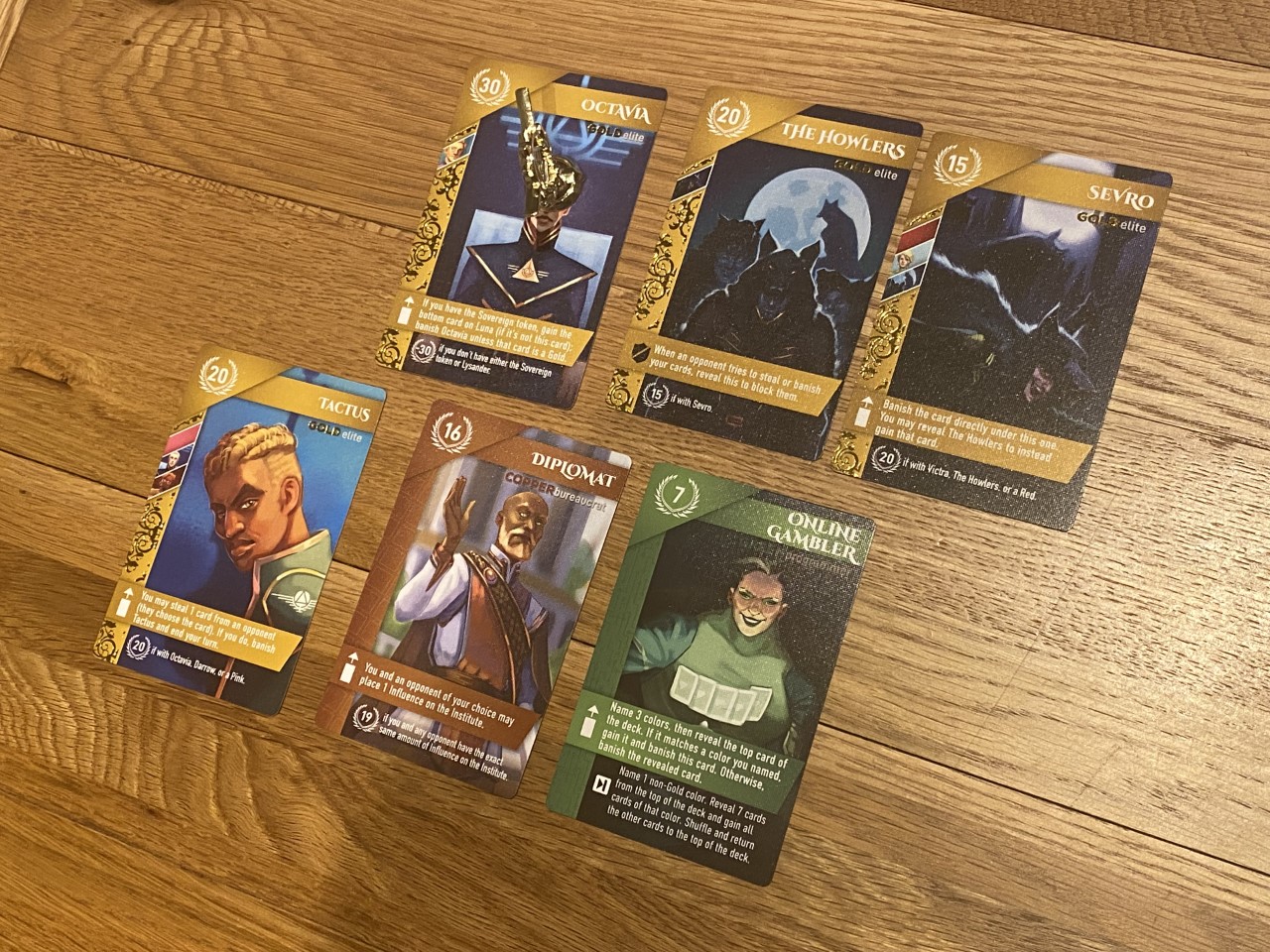 Whilst this isn’t the kind of game I usually go for, I have added it to my keep shelf for now on the basis that I think it’s what I call “heavy filler.” It’s the kind of simple, fast-paced game that can still challenge players and make demands of them to pay attention, take appropriate risks and plan for the long term whilst dealing with adversity. Honestly, I think Red Rising is a very clever, very enjoyable experience and I am looking forward to trying it with new people going forward.

You can grab Red Rising either at your friendly local game store, or directly from the publisher, Stonemaier Games.