Armed with just a grappling hook and your handy pistols, you’ll need to shoot and battle your way waves of alien enemies before it’s too late. Twitch reactions won’t be enough to carry you through and you’ll need to think strategically and plan your next move to stay alive in Swarm.

Swarm, from Greensky Games, is a fast-paced, arcade-style grapple shooter that takes place of multiple vibrant, fast moving and colourful levels where players must defeat the invading swarm and aim for the highest scores across global leaderboards.

It all sounds hectic, and it is, but the more you play Swarm, the more muscle memory kicks in and instead of concentrating on either shooting or swinging as a knee jerk reaction to your current placement, it all comes together in a smoother symphony of shooting, gliding, falling and swinging again in a John Wick style bullet ballet.

Gameplay gets progressively more difficult throughout the main story campaign. I say “story”, like you might be expecting some depth; but it’s a strong description for what is in fact a loose collection of words giving you an excuse to shoot aliens. With twenty five levels over five different locations the variety keeps coming with new hazards or enemies introduced as you progress culminating in a boss fight at the end of each zone, even if no story materializes.

You might expect a safe zone here or there to catch your breath but that’s not happening in Swarm, it’s all out action, all of the time. You might be avoiding electrified platforms on one stage or swinging through traffic in another, all whilst you gracefully decimate wave after wave of aliens. Hit the floor though and it’s instantly game over, but thankfully most levels are fairly short and you can pick up right where you left off. 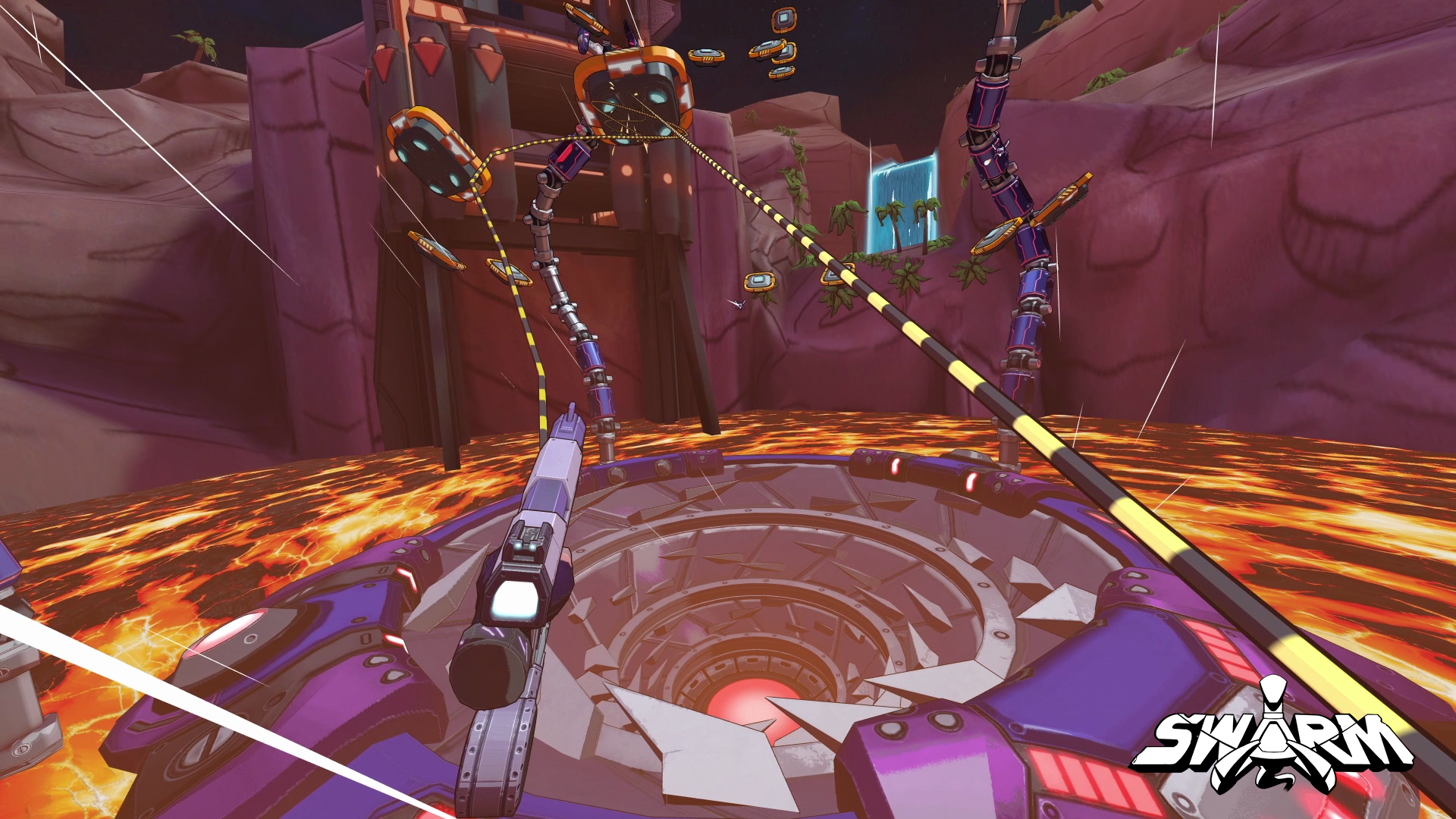 Like most wave style arcade games of yesteryear, placement and timing are paramount to achieve the highest scores. Swinging around like a drunken, trigger happy Spider-Man might get you through a level but you certainly won’t be winning any medals.

Learning the patterns of each wave through multiple plays is vital, and concentrating on both timing your swings and maximizing accuracy will yield the best results; all whilst giving you the combos and multipliers needed to hit the higher places in the leaderboard. There’s also some variety in the focus of each mission, some have you defeating enemy waves, others are timed survival and a few double down on accurate movement and the collection of crystals around the map.

Powerups are littered around the stages but these temporary effects can also be added as modifiers. Ones such as low gravity, unlimited rapid-fire and unlimited slow-mo can be added before each level. Activating mods does however restrict progress on the story for those levels not completed so it’s best left for either fun or as a replay factor for an alternative run through.

Both hands can be used to shoot as well as deploy the grapple so it’s possible to freely switch between the two at any time. Loads of enemies on screen? Go guns akimbo. Need more height, speed or more accurate swings? Forego the bullets for twin grapple guns.

Whilst most Virtual Reality games with full movement tend to restrict scenarios where fast turns and sudden changes of direction at speed can turn your carpet from that nice cream colour to something resembling vomit brown/orange and peppered with carrots; the team at Greensky Games have obviously added a 10th level sorcerer to their staff.

Swarm is at its best when played at speed, where players throw themselves into the premise, but oddly there’s no feeling of displacement or that warm uncomfortable sweating before your stomach cuts short a session of chaotic alien carnage. Nothing. Absolute black magic, thanks. Note to all VR Devs: More of this please.

Its graphics are clean cut and sharp, with a cel-shaded approach to the presentation. Swarm looks great standing still and at speed as it doesn’t try to be something too graphically advanced for its platform. It’s bright, vibrant and a welcome change to the general greys and browns of “realistic” shooters. The music isn’t anything to write home about, but provides a constant arcade beat in the background but the sound effects are clear and crisp and suit the gameplay well.

Swarm, although single player, will have players coming back consistently with a solid arcade-like challenge that is always fun to play and difficult to put down.

Swarm is currently exclusive to the Oculus Quest & Rift and it’s available through the Oculus Store but will also be coming to PC-VR soon.