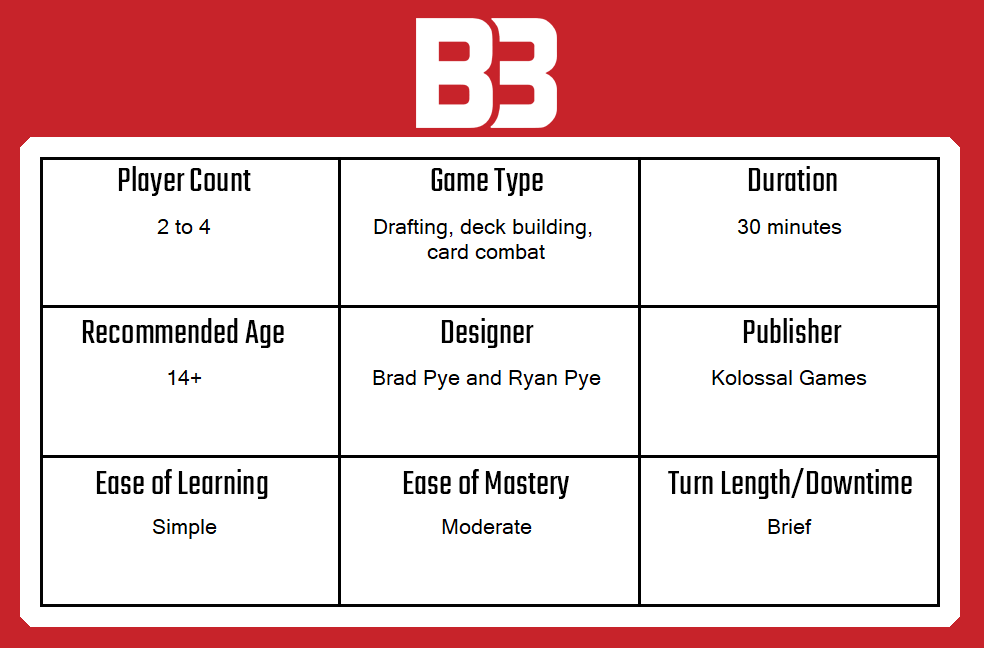 As darkness descends on Victorian London, the denizens of the underworld emerge from their hiding places to prey on the weak. In Terrors of London, two to four players each take control of an Overlord — an undying creature of great power — as they wrestle for control of the streets. Card drafting and deck building are the mechanics in play, but the intensely dark theme and incredible artwork steal the show.

Terrors of London is now live on Kickstarter, should you want to back it.

Terrors of London is a brand new design from debutant designers Brad and Rye Pye, a pair of brothers who were discovered by Kolossal Games through the wonders of Facebook. It uses the traditional concept of competitive deck building but introduces a few nuances to the norm, including a unique horde mechanic I’ll detail later. It’s a very fast-paced game with a lot of damage flying around, thanks largely to the fact that all attacks go directly to the Overlords themselves.

The game is mostly focused on what the game calls ‘The Street’ which is a communal set of five cards placed face up between the players during setup. The Street (in addition to a basic set of starting cards and abilities) is where players purchase new cards to add to their discard pile, which is then reshuffled and drawn from repeatedly. Players are therefore incentivised to constantly reassess which of the available cards will work well in their deck as it expands.

Purchasing cards and dealing damage is achieved based on symbols shown on the cards played each turn — whilst each player normally draws five cards per turn, there is no limit to how many they can use. Most cards also feature one or more keywords that might bestow them (or another card) with powers like Haunt, which causes them to remain in play for an additional turn. In addition, each Overlord has a specific ability on its player card as well as a deck of ability cards, only two of which are shuffled into the starting hand. This gives Terrors of London a unique feel almost every time you play it, thanks to the many possible combinations.

In the end, the Overlord who can reduce their opponent’s health to zero wins. Games play out as frenetic races to amass the most powerful damage-dealing engine, with occasional nuances introduced via healing items or effects, as well as creatures that break up the normal flow of the game. Two players will usually complete a match in around thirty minutes, though that can increase or decrease depending on the way you build decks. 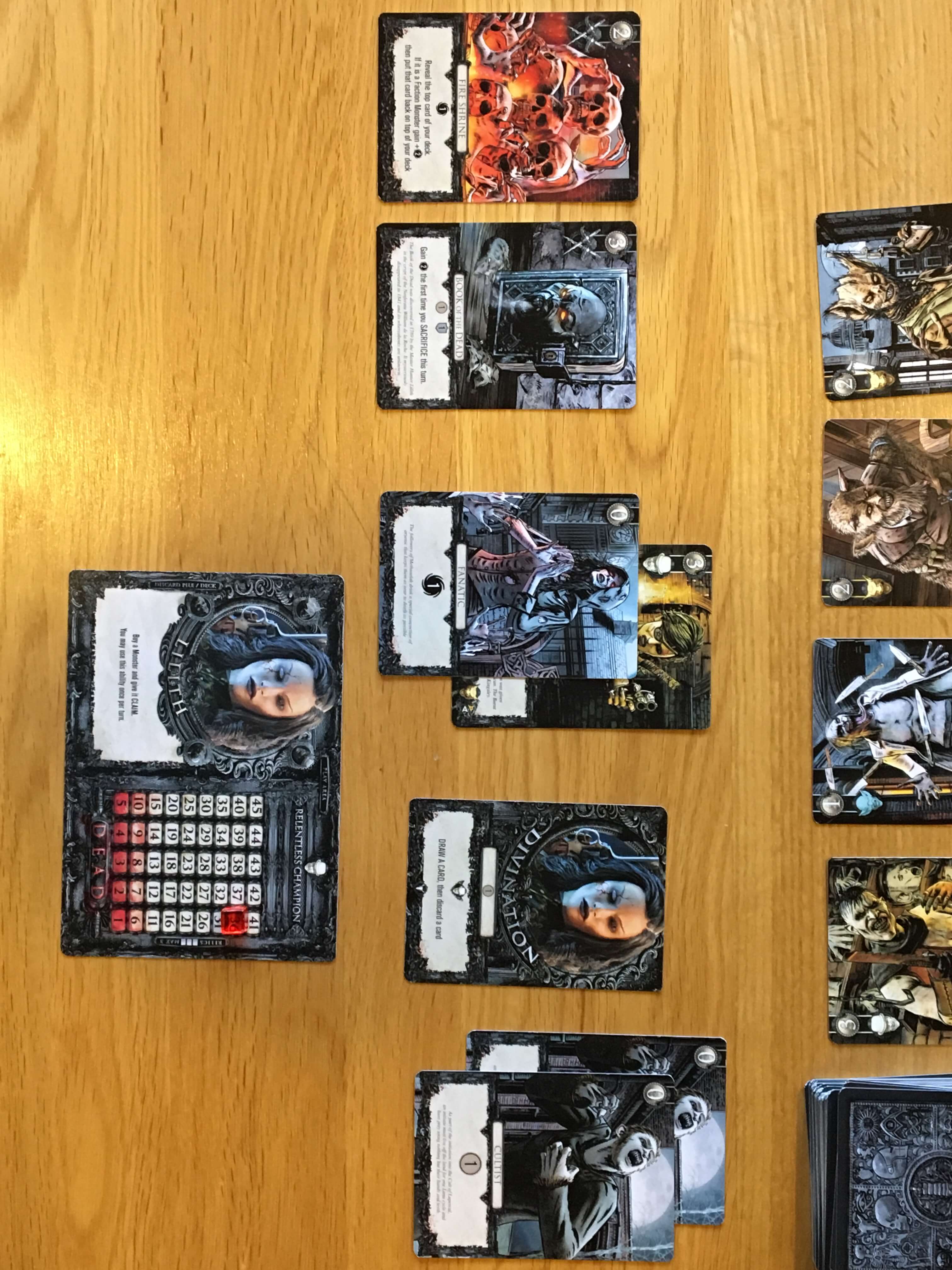 The most striking thing about Terrors of London is undoubtedly the artwork that features on each and every card. Not only are these cards incredibly rich in detail and character, but they also bring an intense, dramatic theme to the game. The art style is definitely comic inspired, but there’s a certain darkness to the characters that I think really brings it to life.

I should mention that I’m playing a preview version of the game, so whilst the components I’ve been using are not absolutely final, it is fairly reasonable to say that they seem very nearly there. I guess it’s possible that more cards (or perhaps more individual artwork across some common cards) might be introduced. I also overheard an interview with Kolossal Games in which a deluxe version of the game featuring more characters was suggested.

Assuming no major changes during the Kickstarter campaign, Terrors of London includes a fairly straightforward set of components. There are currently four player boards (one for each of the unique Overlords) as well as a deck of five unique power cards for each of them. The main bulk of the box’s content comprises a huge deck of shared cards that form The Street. Separate to this, there are enough cards to form a starting hand for each player, as well as a smaller deck of Acolyte cards which sits next to the draw deck for The Street.

The manual as it stands was sufficient to teach me how to play the game in less than half an hour (which is the main thing), but it is not in its finalised form, so I can’t comment on its aesthetic appearance. The writing is currently functional and there are relatively few areas for misinterpretation, so I’d expect the final product to be very clear. 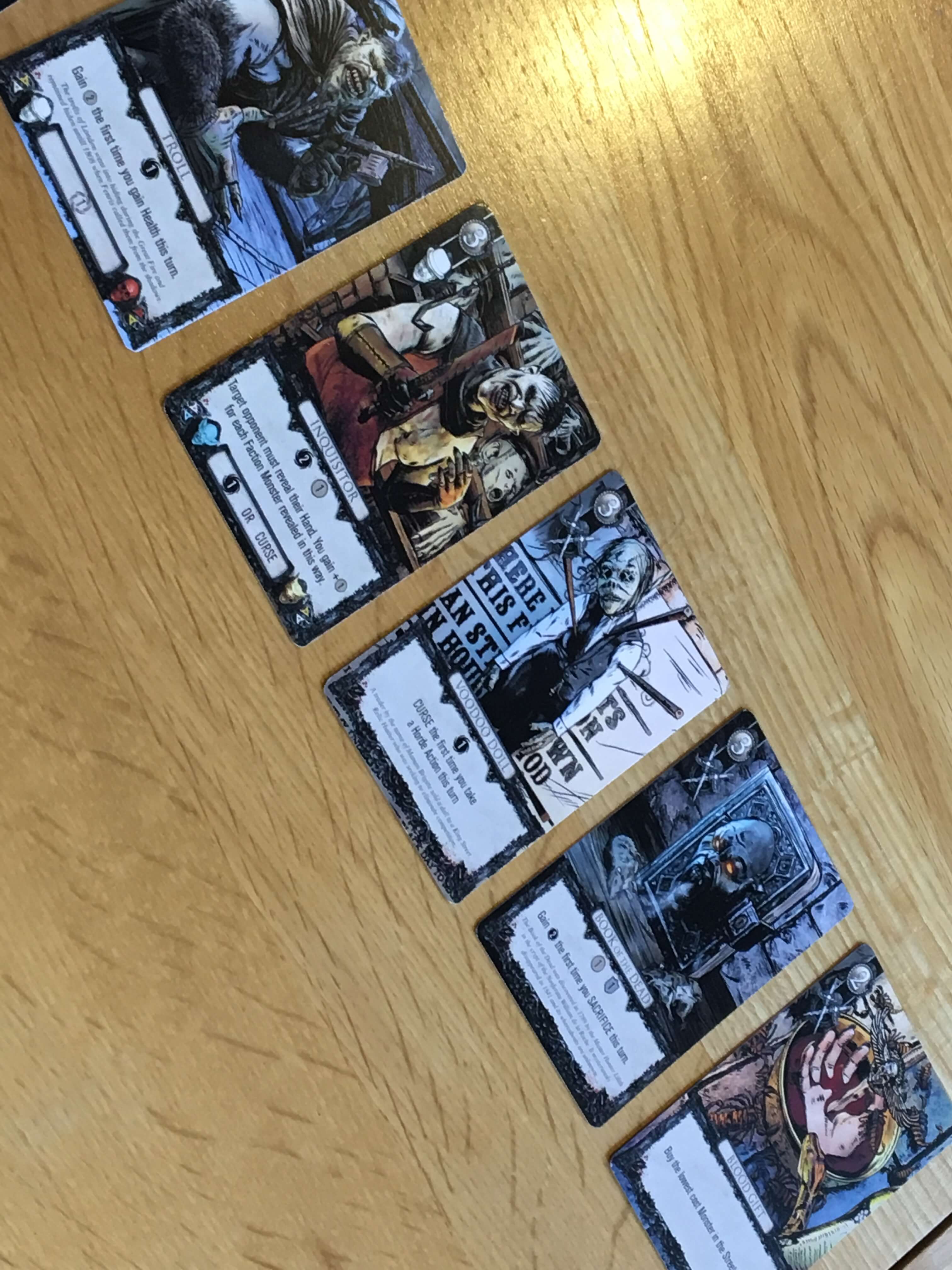 Terrors of London plays in a very straightforward way, both in terms of setup and ongoing play. Setup is a simple matter of taking an Overlord card and placing a health cube on it, then choosing two power cards. Players then take eight specific cards to fill out the rest of their deck, shuffle it and draw their first five cards.

On your turn, you assess the cards you have and play any number of them, gaining damage, coin or regeneration values to match the symbols shown on those cards. The prebuilt deck contains cards that bestow either one coin or one damage, so a first turn might result in, say, two damage, two coins and one of the unique Overlord cards being played. In this example, you would deal the damage directly to the opposing Overlord, then use your two coins to buy cards from The Street, which are then added directly to your discard pile.

Sometimes, you’ll want a bit more consistency in your deck, or you’ll simply have no choice, so you can always purchase an Acolyte card from a separate deck that lives beside The Street. Acolytes are like a more powerful version of the starting cards, so they give players a bit of an out to ensure no turn is wasted. Terrors of London is much more interesting once the purchased cards begin to get reshuffled and brought back into the players’ hands.

By the mid-game, rather than dealing one to three damage, you’ll almost always be aiming for upwards of ten damage per turn, plus taking into account a number of other factors at all times. For example, the Overlord Lilith has an ability that lets her place a purchased card onto her draw deck and not into her discard pile, which can change decisions considerably. Similarly, Fenris can spend attack damage as though it were coin, which is very powerful.

After playing their cards, the active player then draws five new cards and passes their turn. The manual doesn’t clarify if players should draw up to five or just draw five regardless, but I imagine it will in the final game. It’s also worth noting that there are a number of statuses that can add additional (brief) steps to a turn, such as turning haunt tokens onto their dismiss side, for example. 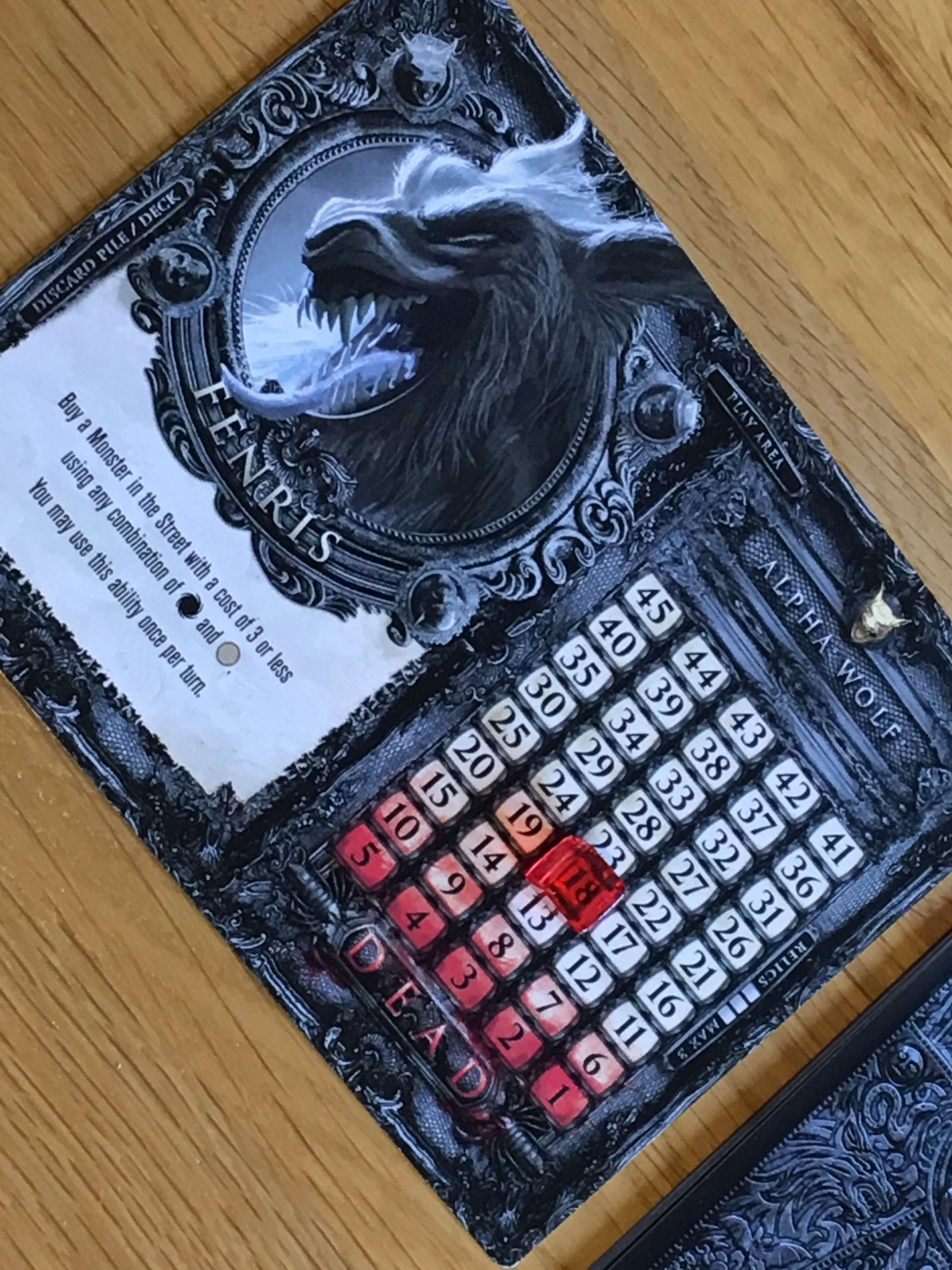 Aside from the wonderful artwork — which is simply a pleasure to thumb through — what I really like about Terrors of London is how it creates an intense, race-like feel that really drives players to build engines, make madcap combos and really smack the opposing Overlord in the chops. It’s a very tight, compact experience which is easy to pick up and play but quite challenging to master, thanks to some of the card relationships, the special abilities, and the horde mechanic.

Speaking of the latter, the horde mechanic lets players use creatures of a certain nature to band together for additional benefits. For example, some humans can horde up with certain undead creatures, which in turn lets them choose a benefit from any card in the horde. This might result in extra damage, a bonus token-based effect or something even more powerful. 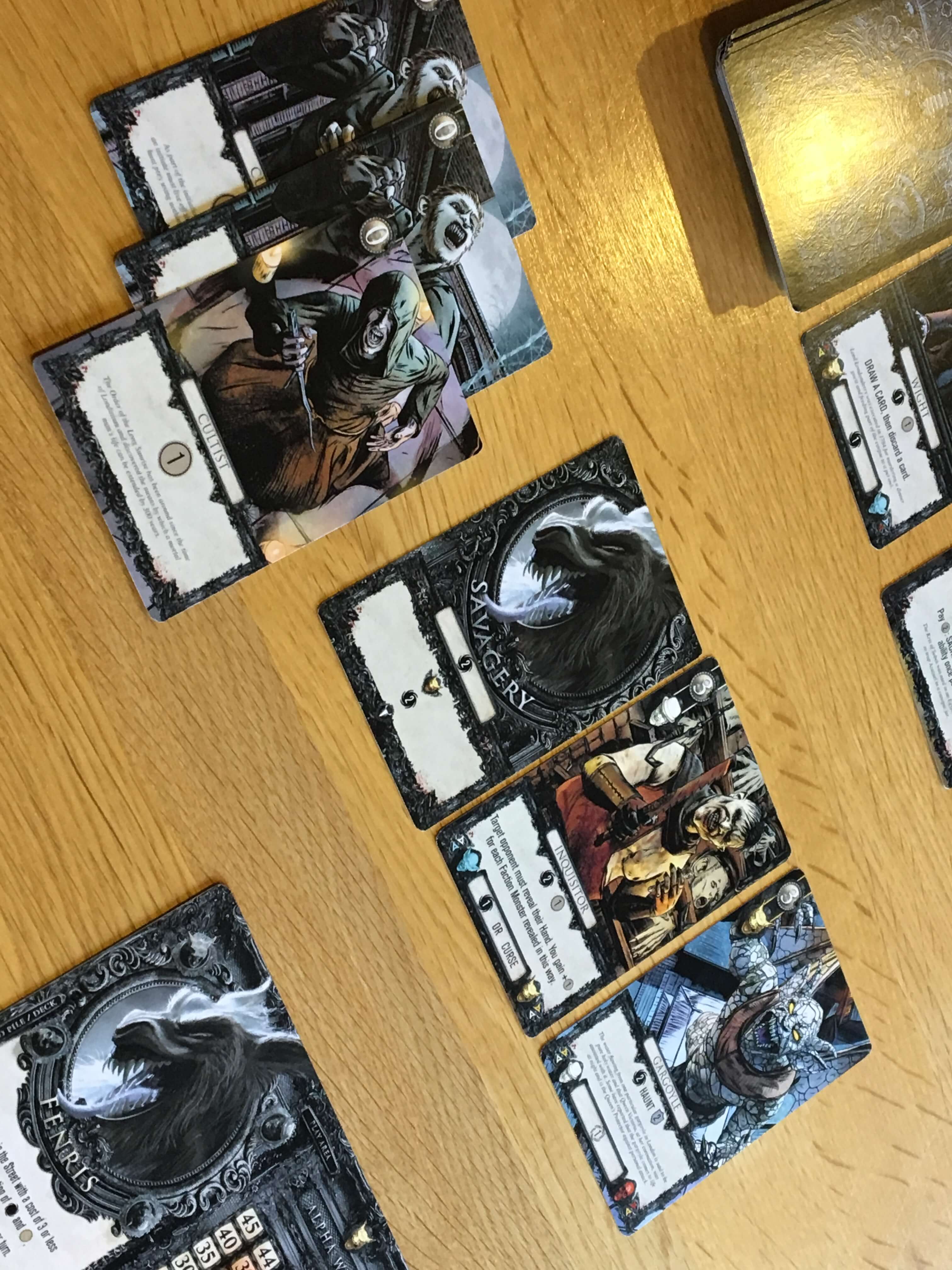 Terrors of London strikes that exceptional balance between being simple to pick up and play (as well as being highly portable) and delivering a deep, rewarding experience, rich in possibilities and replay value. Whilst it’s never possible to be absolutely certain that a game in progress is going to reflect the finished article properly, I feel confident that even if Terrors of London stays exactly as it is, it will be a must-have for any fan of deck-building games.

A copy of Terrors of London was provided for review purposes. The game is now live on Kickstarter.