Super Mario Bros. remains an all-time classic to this very day. It set new standards for video games as a whole and for platformers in particular. Years later, other games still struggled to replicate Super Mario Bros.’s tight controls and platform physics. One of these games is 8BitBoy, developed and published by AwesomeBlade.

8BitBoy is a homage to the traditional platformers of the 80s and early 90s. Contrary to what one might expect, it starts out with a surprisingly dark and text-heavy introduction. Our main character is a thirty-ish man who struggled to finish his education, has no permanent job and is generally unhappy. 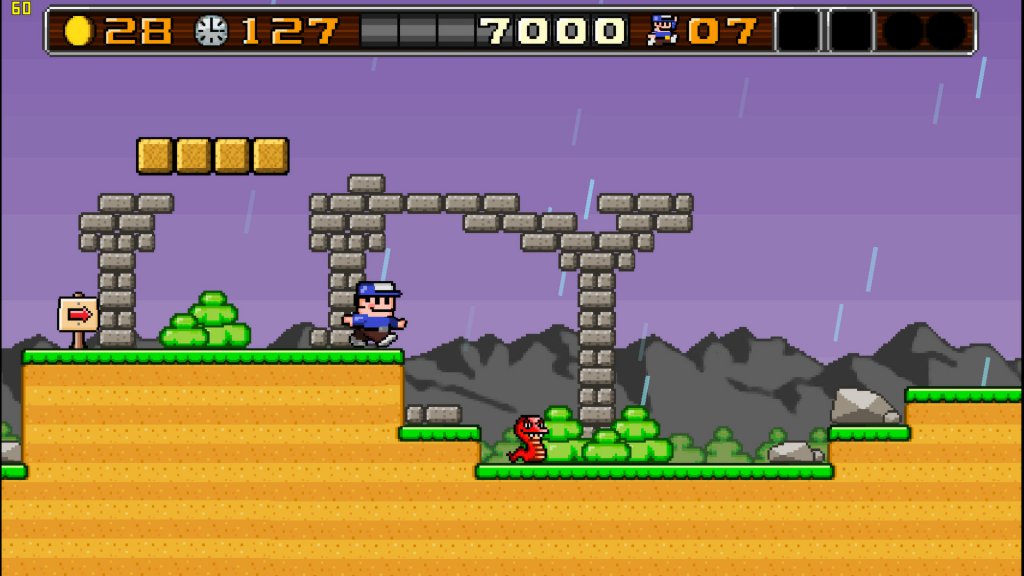 Thinking back to his worry-free childhood days, he digs out his old gaming console. The console looks suspiciously new and, once plugged into the CRT television, it turns out that the suspicion was justified: our hero is sucked into the game and turns into the titular 8BitBoy — even though he has at least twice as many bits.

Grim introductory colours are replaced by jolly landscapes and cheerful music. Provided with a purpose and goal, Boy fights and jumps his way through five different worlds with numerous levels and bonus stages.

8BitBoy’s gameplay is lifted mostly from classic platformers of the Super Mario franchise. There are golden coins to collect, coin blocks and enemies that can be killed by jumping on them. Interestingly, the power-ups resemble the superball from Super Mario Land, a second-tier Super Mario entry. 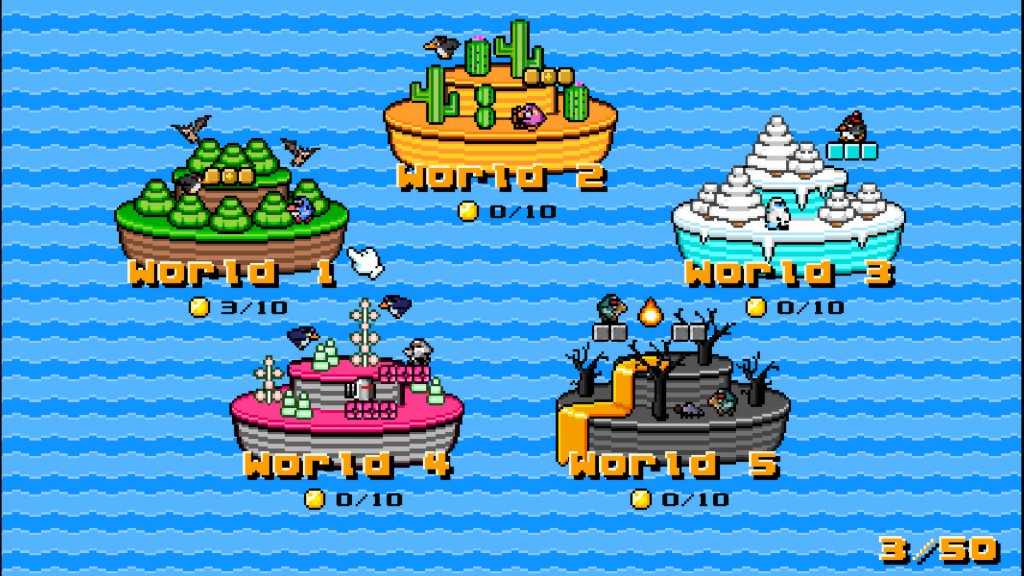 One power-up (represented by berries) grants Boy a shield that absorbs one hit. The second one lets him launch balls that bounce all over the place. The ball’s bouncing physics can be used to target otherwise unreachable opponents. Next, Boy can launch even more lethal bouncy balls and with the final upgrade, the balls catch fire.

Equipped with this impressive amount of firepower, Boy proceeds to murder anyone in his path: primarily birds and other animals. And yes, the critters are murdered; once taken out, their cooling carcasses remain on screen. No enemy is just ‘defeated’ and flies off screen.

Overall, the enemies are quite well designed. Most follow simple patterns and just run around, fly at Boy or bounce up and down. However, some birds get really angry after the first hit and increase their movement speed. Snakes do the same, but only if Boy is within their grasp. 8BitBoy offers nothing highly advanced here, but it is nice to see opponents that do a little more than just walk back and forth. 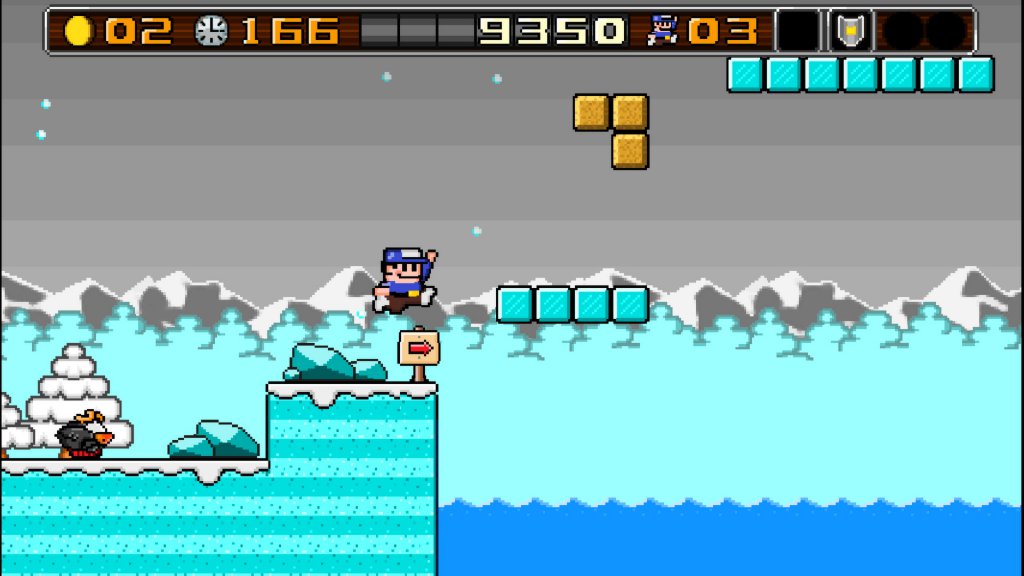 Enemies aside, the meat of 8BitBoy is the platforming. Unfortunately, the jumping controls are rather floaty. Many of the more difficult jumps require Boy to gain momentum first which, thanks to slippery physics, puts you into a pit more often than not. And if you use a keyboard, the up arrow makes you jump. Nostalgia or not, this was frowned upon even in the early days of DOS.

While the physics is not a full gamebreaker, the overall design of 8BitBoy is. After every stage, the game automatically saves, which is nice, but there are no mid-level checkpoints. This makes the life system not only pointless, but actively work against you. Why is that? 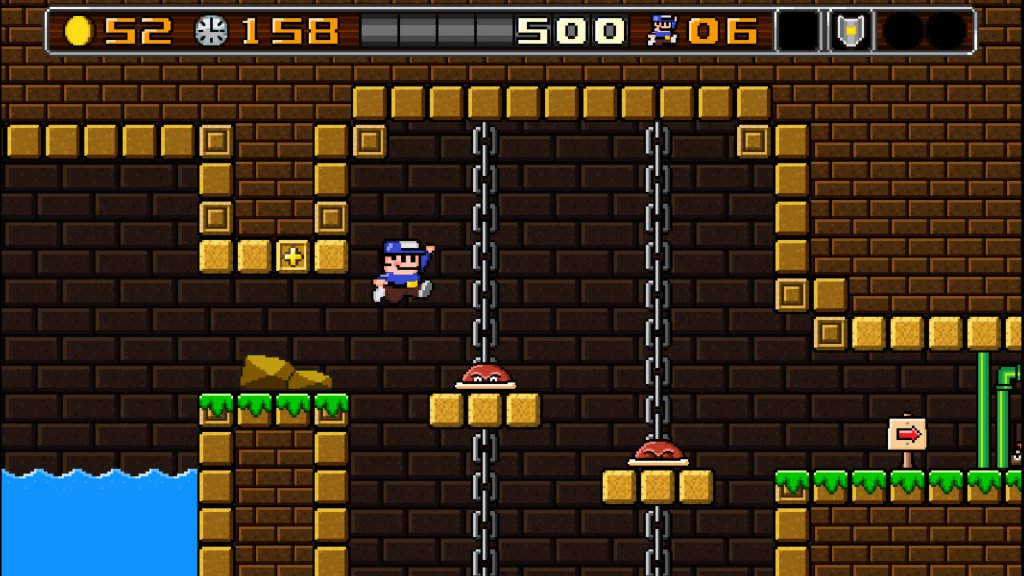 8BitBoy kindly saves not only your progress, but also your power-up status. Once Boy bites the dust, he is sent back to the start of the stage, albeit fully depowered. Once he loses all his lives and gets a game over he is also sent back to the beginning of the stage — but with all the power-ups Boy had when he initially reached the checkpoint, including lives beyond the initial three.

Thus, it is best to always be fully powered up and have only a single life left. This guarantees that every death restores Boy fully. This strategy in turn has other consequences: extra lives are not only useless, but actively hamper your progress. However, extra lives are, for the most part, the reward for exploring levels.

You can generally complete the levels in 8BitBoy in a short amount of time — and you have to in hard mode, where the time limit is strict. Exploring them takes a lot longer. With the reward for exploration being more coins at best and more deaths at worst, there is little reason to ever explore a level. 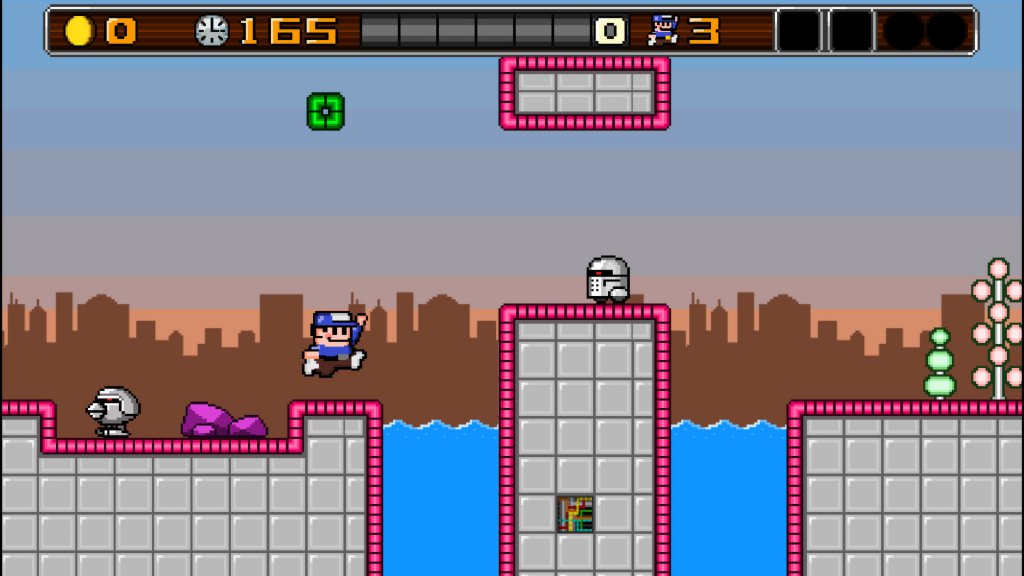 This gets worse in later stages, when the terrain becomes more hazardous and one slip sends Boy back to the beginning of the stage. In addition to that, the overall difficulty is a bit of a rollercoaster; some levels pose almost no challenge whereas others demand tight jumps and precision manoeuvres. Others are trivial with a power-up or two, but punishing while Boy is in his basic form — another reason to stick with the one-life policy.

Overall, 8BitBoy is well-meaning and it is clear that a lot of love went into this project. Its style does indeed capture some of the magic of Super Mario World, Alex Kidd or Wonder Boy. On the whole, 8BitBoy is flawed — fundamentally so — and hard to recommend over platformers that were released decades ago.

8BitBoy is available on Nintendo 3DS and Windows PC.