Beware what lurks in the depths.

Darling, it’s not always better down where it’s wetter. Sometimes it’s terrifying and full of monsters, like in Subnautica.

Back in the day, if I saw an open world survival game on Early Access, I would have rolled my eyes. It’s really nothing personal, but they became a breeding ground for half-finished games — innumerable ideas that were great on paper but failed in execution or lack of development support. While I won’t name games, if you have explored the genre, then you can probably think of at least one. Then you have Subnautica, which defies expectations and pulls itself together for something spectacular. After all, over 50,000 positive Steam reviews can’t all be wrong, right?

While Subnautica took its sweet time coming out of Early Access, it finally released this past January. Dying to know what the fuss was all about, I decided to dive in and get my feet wet. I hadn’t played one of these types of games in quite a long time, so I was in for a bumpy ride. Despite that,  I love the theme. The mysteries and wonders of the sea are things that still amaze me. The fact remains that we still haven’t explored 95% of the ocean on this rock called Earth, which is composed of 70% water.

At its heart, Subnautica is about exploration and patience. You’re dropped into an alien environment and have to find a way to survive. Beyond that though, a greater mystery lies at the heart of the ocean. 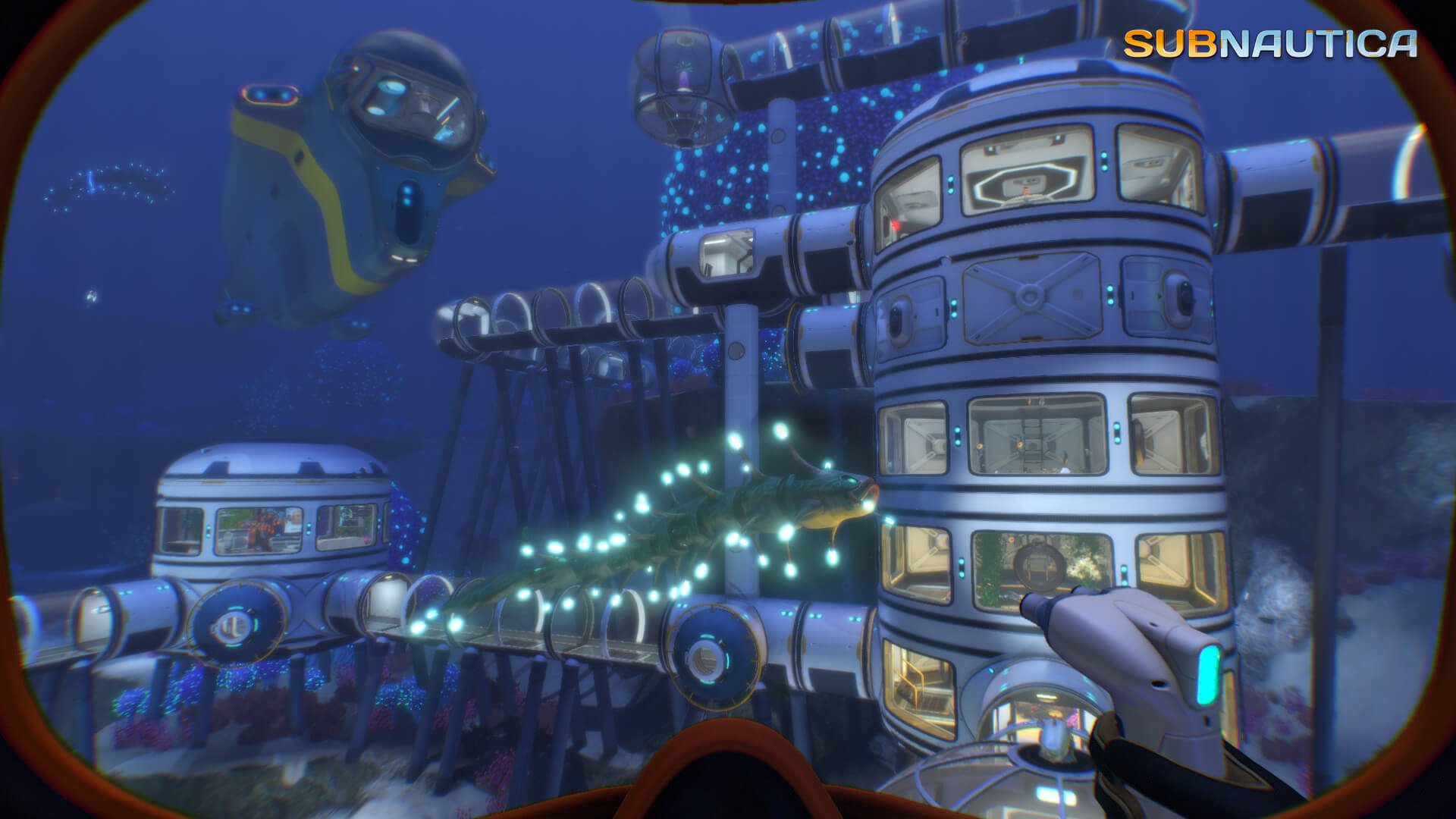 Subnautica is one part BioShock and two parts Castaway with Tom Hanks.

Except there is no Wilson and you are alone with terrifying sea monsters. But I’m getting ahead of myself. Subnautica starts off pretty simply: your ship the Aurora — for some reason or another — crashes. Plummeting towards an alien planet, you manage to board an escape pod in the nick of time. After being knocked unconscious, you wake up in the middle of a vast ocean with a severely damaged pod. The Aurora is in the far distance, in flames, and you have no idea if anybody else is alive.

How you behave next depends on which game mode you chose. There is the general ‘vanilla’ experience, which is Survival. This includes having to worry about food, water, health and oxygen. Other modes make it easier by removing food/water requirements, while others give you only one life to live. Then you have creative mode if you are purely the creative type (or luckily for me if you are writing a review). More on that in a bit. 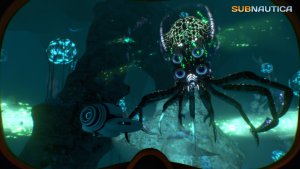 Crafting in Subnautica I found to be very easy to understand. It has all the caveats of ‘go punch a tree’ but done in a very creative and simple-to-understand fashion. You need metal to create parts? Go find some debris from the Aurora. The life pod you inhabit has a replicator, capable of breaking down raw materials as well as building advanced circuitry and tools. The replicator really cuts down on the experimenting with sticks thing in favor of getting you up and going fast, as it tells you what you need for any given blueprint. In fact, I had all my basic starting equipment and had made everything my replicator could make in about an hour.

Now trust me when I say that Subnautica is far from a shallow experience. I may have been efficient in fixing my life pod and getting started but there is so much more to see and plenty to build. Vehicles like the Seamoth or the mighty Cyclops, a personal submarine, help ferry you around the ocean. Building your own base and upgrading your equipment gives you a survivor’s edge.  But like I mentioned earlier, Subnautica is about exploration — finding the blueprints for these items is the bulk of gameplay. 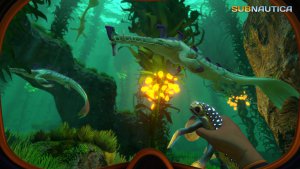 Your ultimate goal is to get off the planet and that requires a huge amount of resources and time. There is more to it, revealed as you follow the random radio signals and distress calls you receive from your life pod. There is one particular moment about six hours into the game that had a good twist; it’s at this point that the game really is telling you that you’re in for the long haul.

When it comes to gameplay, Subnautica is a ‘slow burn’ experience.

When you see a sea monster coming your way, most of the time you are going to want to avoid it. The game has a first-person–shooter perspective but hardly acts like one. It’s more about finding vistas, scenes and moments that make you go ‘wow!’ and less about shooty bang bang. The primary means of progression is completely tied to your scanner and how far you can dive. Lying around all over the ocean are parts to scan and, once scanned, they create a blueprint for construction. 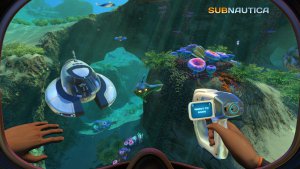 I was a little impatient with Subnautica and found the rate at which you find stuff can be taxing. Sometimes you get a radio signal that leads you to stuff, but these moments are few and far in between. Don’t get me wrong, pick any direction on the compass and you will more than likely find something, but you need to stop for oxygen constantly early on in the game. Throw food and water on top of that and you’re looking at quite a challenge to complete a blueprint.

Not to mention that the ocean is so vast and wildly covered with flora and fauna. You’re bound to miss something in your first pass of an area — I found myself retreading areas over and over again. On one hand, this is great and really adds to the Subnautica’s length and replayability. Sometimes, though, you just want to make some dang progress. Don’t expect to rush through anything.

When it comes down to it, Subnautica masterfully displays the difficulty of exploration and the dangers of the unknown. You could easily spend fifty hours in this game and might not have seen everything it has to offer. I was thankful for creative mode, which gave me the chance to see later parts of crafting and experience deeper content, which normally would have taken another twenty hours to see.

The seaweed is always greener in somebody else’s lake. 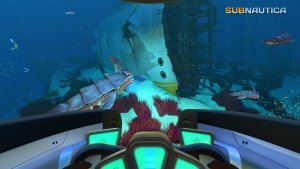 When it comes to Subnautica’s visuals, it’s nearly perfect. The ocean is gorgeous and the wildlife is enchanting and scary all at the same time. From giant electric eels to small glowing fish, the developers have created a unique ecosystem, and it shows. The only real gripe I had with the game is when you’re on land. This is where things kind of go off the rails. You can tell that the game has a hard time handling you here — the main character’s shadow looks weird and terrain can be unruly. It’s a small gripe in a vastly beautiful game.

Subnautica is made with the Unity engine. I find it very impressive looking and had little to no issues when it came to running on my PC. Keep in mind, though, that just like any other game, all graphics cards are different and some people have had issues. Thankfully the developers are active on the forums and have consistently patched the game. 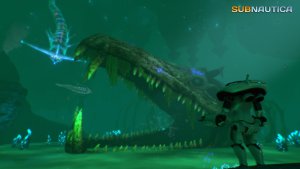 Matching suit with the wonderful underwater vistas is the music and sound of Subnautica. As you explore the unknown, you hear all sorts of watery noises. That might be a school of fish fluttering past, or perhaps the howl of a terrible sea-beast. The music changes tone the deeper you go and becomes more ominous; it really has an amazing effect on the game.

All games should do exploration the way Subnautica does.

At the end of the day, nothing felt overwhelming in Subnautica. Crafting was simple but vast, survival mechanics were there but not demanding. It’s all very balanced and defines the genre perfectly. You get plenty of bang for your buck and I cannot recommend it enough. Again, I admit I’m not the greatest fan of the genre but I still think anyone could enjoy this game. Just pick a direction, explore, and relax.

As a side note, there is controller support and Steam cards/achievements —and in case you aren’t sold yet, Subnautica also features VR support, which just sounds awesome.