Ever since the advent of computer space gaming, I have flown, dodged, rammed, barrel-rolled, killed enemies, burned up spaceships and crash-landed in way too many star systems to ever count. What I’ve always wanted to do, though, is have my own company. A Starship Corporation, if you will. And I will. And I have… with, obviously, Starship Corporation.

Starship Corporation, by Coronado Games and Iceberg Interactive, is a very deep and complex space-company-management simulation in which you control every aspect of the corporation, from ship designs (down to each hatch’s placement) to contract fulfillment and the overall ‘big picture’ of the business.

Once in control of my own corporation, I was responsible for every aspect of its management. From ship design, researching new technologies, to installing crews and fulfilling contracts —  I was in charge of every single, tiny aspect of my company and its vehicles.

While that may sound a little over-the-top, in Starship Corporation I’m in charge of the ‘big picture’… along with everything else. Every piece involved, all the way down to where the hatches are placed, between the components, of every ship. This is not your father’s space simulator. Which is something I’ve never really understood — it’s my game, so of course it’s not my dad’s.

This is a game that is immensely complex and complicated. You’d better eat your Space Wheaties and drink plenty of Tang before attempting to control a company of both this magnitude and intricacy (AKA delicacy). You start your career based on Mars with only a few initial contracts. These involve, as most do, creating ships that don’t exist and are needed for (usually) a specific task. Alongside a list of customer requirements for the ship, certain items are needed for every ship to function. More on that in a bit.

Sometimes hull sizes are defined by the client, other times not. However, the customer will always have a budget, so obviously the cheaper the hull you can use — while still fulfilling the consumer’s requirements — the more profit you make for each ship.

Here comes the tricky/maddening/hugely satisfying part of Starship Corporation: the actual ship construction. The two main factors are 1) what components the client specifically needs and 2) the parts needed for all starships to function: engine, fuel, bridge, computer, pilots and technicians, just to name a few. Somehow, you have to get all of these pieces crammed into a limited space. If you try to get more space by using a larger hull, most of the time you instantly go over budget.

Then, every single part needs to be connected, which is a lot easier said than done. Between the use of hatches and corridors, each tiny piece and part needs to be linked to everything else. There are special hatches for certain parts that attach to the hull. You have to install them — you can’t have hull breaches! Or your crew will mess their breeches.

A lot of times, the new ship you’re designing needs a part you haven’t researched yet. You then have two options: wait on this particular contract until the component is researched or spend some extra money and instantly buy out that part of the research. In the beginning at least, it’s easiest just to buy the piece to get the ship built.

Luckily, there’s a screen as you’re building each ship that tells you what you need and what you’re still missing. Modules are easily placed and/or rotated, as well as easily moved or removed. There’s also a certain design rating that each ship has to meet in order to qualify. This is generally easily obtained.

Once all of the requirements for the ship are met, you then have a complete ship built.

Now we get to fulfill the contract, Uncle Bob?

You have all of the requirements ‘green’ on your progress screen, but then you have to run the ship through ‘Prepare Simulation’. The simulation runs in order to make sure everything is ship-shape and working together as planned. When your new creation passes, you can save it as an actual, functioning vessel class.

Hang on a second, Jimmy. Now we have to send it to be tested by the crew.

Once completed, your craft is sent to the Crew Management portion of the procedure. Here, the crew members are put through various ‘what-if’ scenarios to get three more ratings on the ship. Besides the design rating for each spaceship while you were constructing it, there are three more ratings that must be met or exceeded for each contract: Standard Operating Procedure (four missions); Emergency Response Strategy (seven missions); and the Hostile Encounter Program (nine missions).

At least during the tutorial, you get a little bit of practice with a few of the tasks your crew may face. The (mock) trials your crew go through range anywhere from Red Alerts to Power Failure to Computer Revolt. However, you do not get to pick and choose which scenarios are run —  because all twenty are thrown at your people on board. How they react to each situation is then tabulated to give you the three ratings that apply to your new ship (SOP, ERS and HEP). Luckily, there’s a button you can choose to ‘Auto-Resolve All’. Whew! Otherwise, you’d have to manually go through twenty drills after every ship you built.

After these results are applied to your ship, you can build it on the next turn — umm… provided all three meet the demands of the client. Typically, the ships pass with flying colors. However, if even one number is short (it will be shown in red), the customer will not let you build that craft for their assignment. Luckily, you can always reload the ship and go back through the stress tests.

I have found that if you auto-resolve again, you get the same exact numbers. The only way to improve the numbers is to find a deficit and manually run that/those particular situation(s). This is where Starship Corporation can get extremely exciting — and/or completely infuriating. When I had ships fail, it was usually only by a few numbers, so a manual test or two generally got my beast up to the proper code.

Depending on which test I picked to run to get the numbers up, I found the missions varied greatly in difficulty (and patience-testing). Nevertheless, I got all of my creations through the entire process, built, and out into space, with happy clients as well.

Research has fourteen columns that contain all of the parts in the game. They are categorized and broken down into various sets. With each set, you are able to set a certain monthly amount toward that particular field, if you choose to do so. As with everything else, watch the bottom line. Each turn is a month long and gives you a detailed analysis of what you’re spending where. As much as I wanted to ramp up all the research, I could have easily spent myself into bankruptcy with it. 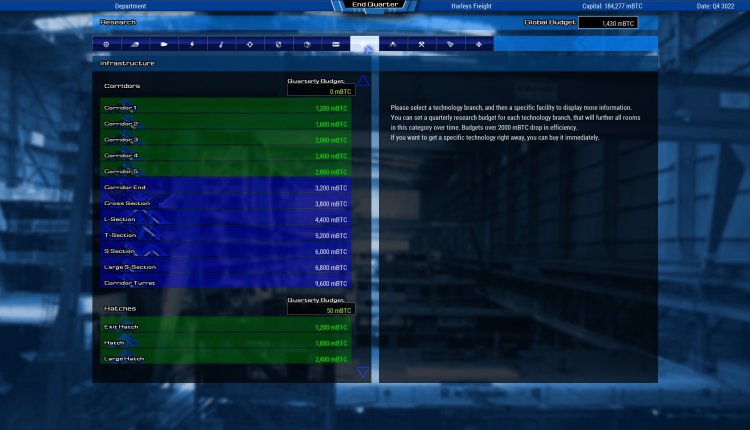 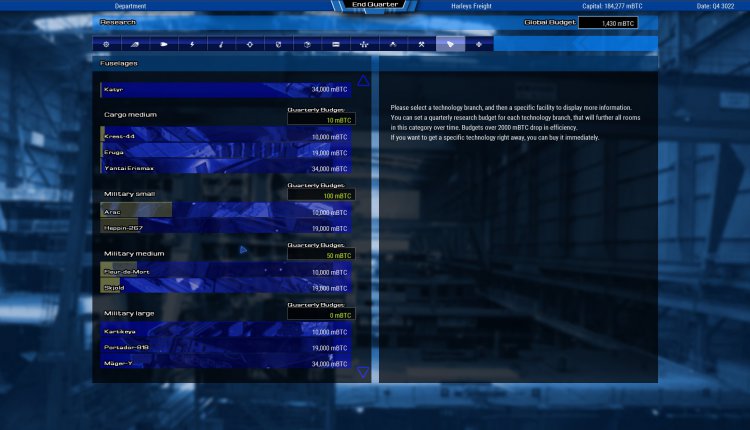 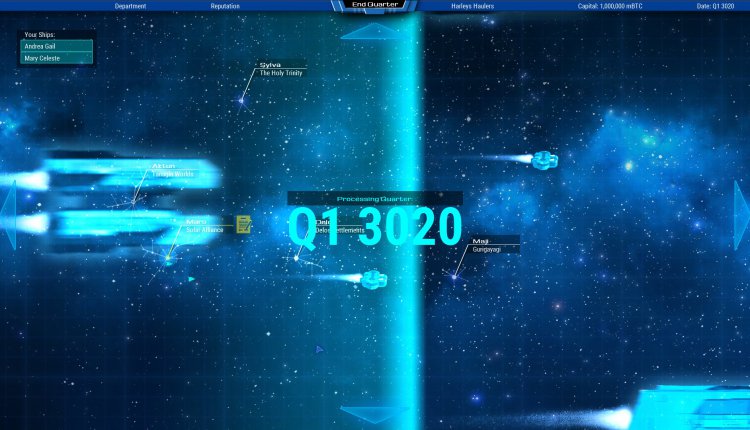 New quarter of the year starting. 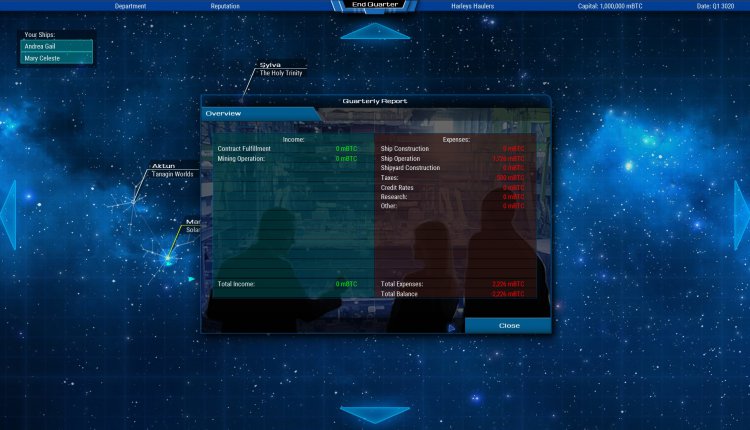 You automatically get a report each quarter. 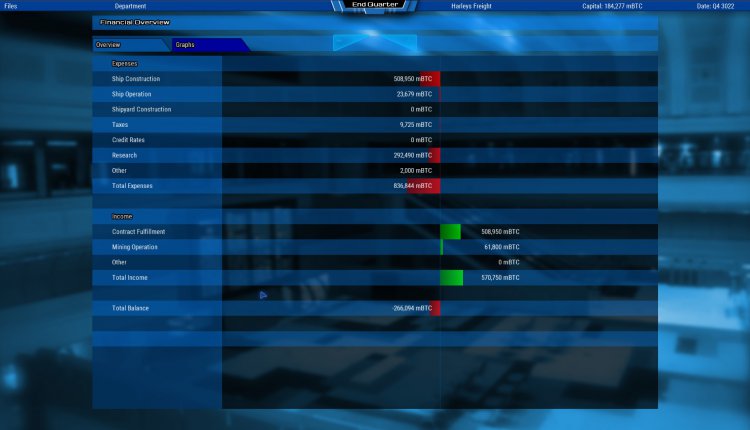 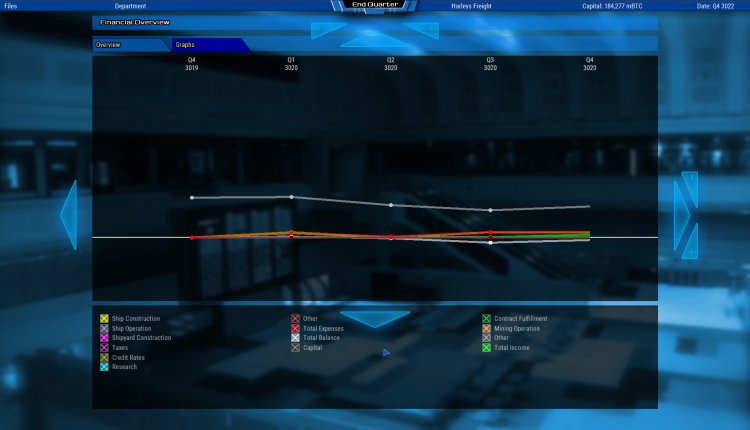 You can into all kinds of financial specifics. 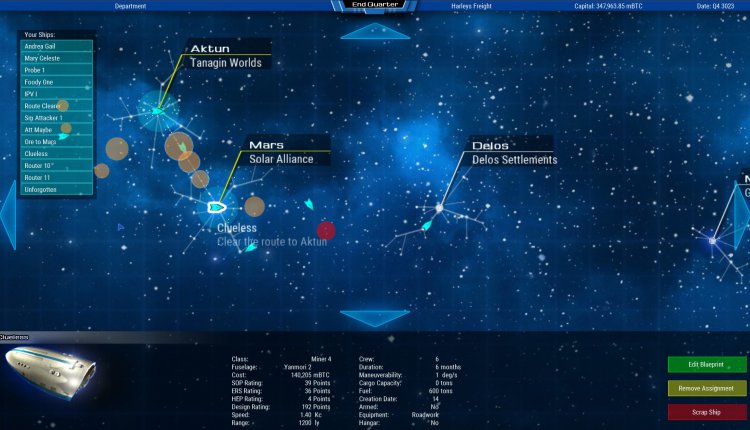 ...deeper into the game.

Starship Corporation is a very deep simulation. Even after completing all of the tutorials, there is still quite a bit of a learning curve. Once you get into the flow, have built a few ships, and get a basic understanding of everything that’s going on, it’s extremely fun — even if sometimes finicky or demanding. It’s all like a puzzle within a puzzle while trying to turn as much profit as possible in the process. There is a myriad of other possible spoilery things the sim will throw at you, but they all simply add to the overall enjoyment. I’ve had a great time with it and will now go back to see just how many contracts and ships I can have going at a time. I’m going to try to turn mine into a huge starship conglomerate.

Starship Corporation is currently available on PC through Steam.