Tokaido review — A gateway to discovery 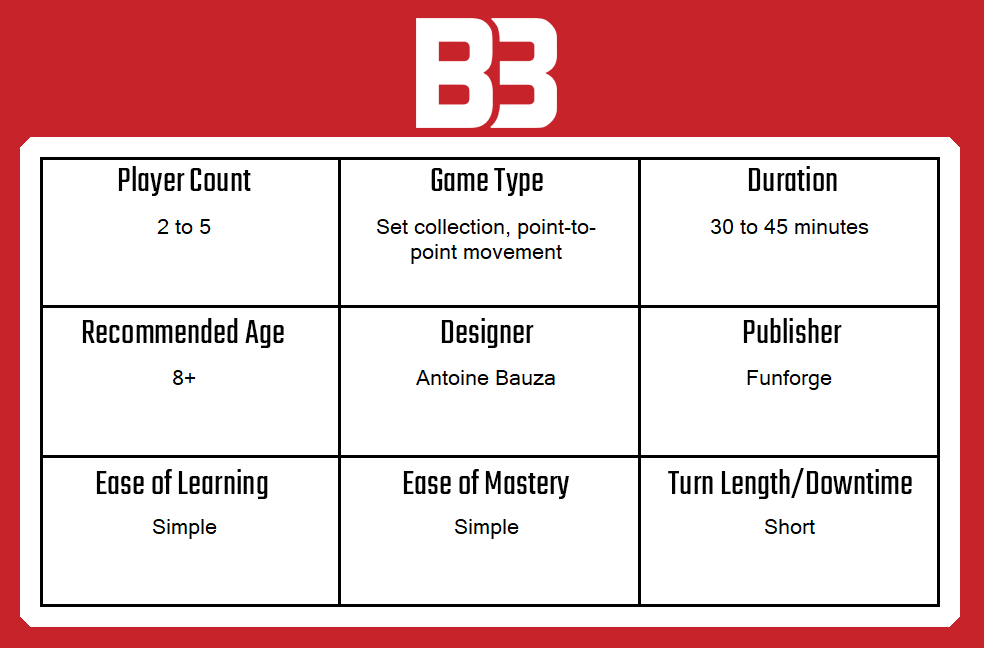 Tokaido is a game about taking a pilgrimage along Japan’s East Sea Road, which is widely regarded as one of the most magnificent journeys that a person can experience. The game simulates this by offering a stress free, mildly competitive take on point to point movement, set collection and basic drafting. Along the way, the players will collect trinkets and oddities, meet strangers, enjoy delicious meals and relax in hot baths. The most accomplished of them will create great works of art, but only the one who reaches their destination in a state of enlightenment will be considered the winner. 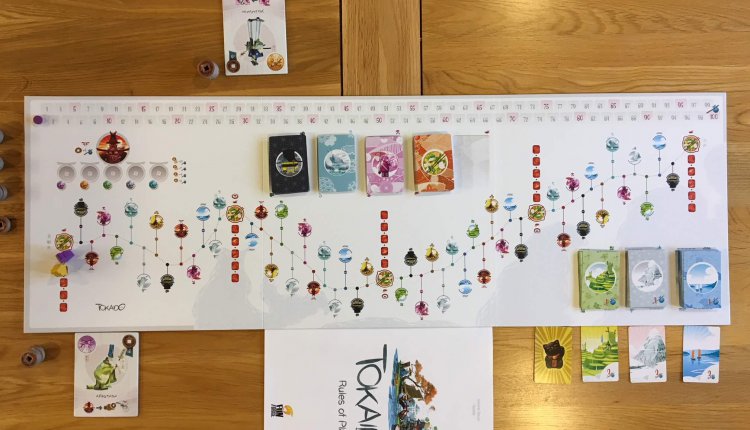 As the introduction suggests, Tokaido is a game that thematically represents a journey. Whilst there is absolutely no real “take that” mechanic that allows players to interact with each other, the game is played competitively, with the winner being the player who has scored the most journey (or victory) points at the end of the road. There are several ways to score points, all of which are fairly straightforward, immediate and for the most part, well balanced.

The game is played turn by turn, with players able to move as far along the journey path as they wish. Most locations on the board are limited to just one or two players, the latter of which only really comes into play at higher player counts. As a result, there main strategy for success in Tokaido is found in balancing when you should skip ahead for a greater reward, or crawl along slowly in order to experience as many scoring opportunities as possible.

Turn order is decided by progress on the journey track. This means that whoever is in last place will go next, even if that player has just moved. This mechanic ensures that whilst skipping ahead might be useful in exceptional circumstances, it can also leave spaces on the board for another player to sweep up, which can be costly. I should also mention that there are several inn locations on the board where players must rest, and these act as checkpoints for everyone to regroup at before progress on the journey continues. 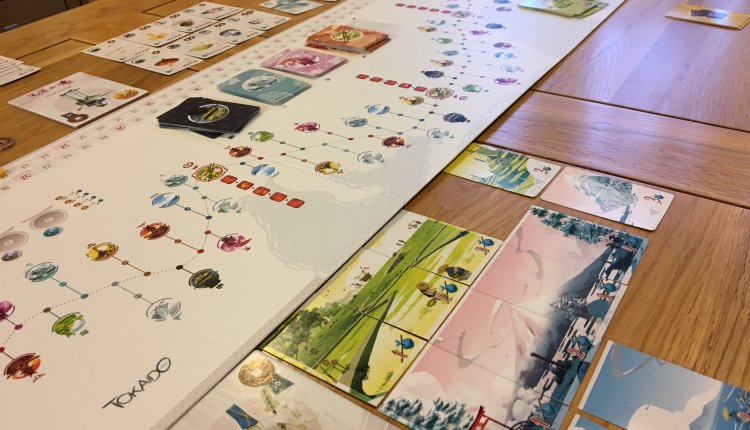 Tokaido is a very beautiful game that is manufactured to an unusually high standard. Undoubtedly, the aesthetic quality of the board, the cards and the other components is a big part of what makes it so appealing to play. There’s a real sense of tranquillity to the landscape cards, for example, which aligns very well with the overall feeling of calm that flows throughout the overall experience. Some of the other cards feature a slightly cartoonish aspect to them that contrasts well with the more sedate nature of the other components to create an appealing overall aesthetic.

The board itself is made from thick, high quality card stock and finished in a smooth, matte material that allows cards to be slid easily off it. The cards themselves come in two kinds – the traditional, playing card sort for curiosities, encounters and hot springs and a thinner, borderless sort used for each of the three landscapes. What the landscapes lack slightly in card quality, they make up for in attractiveness when laid out in a completed panorama.

There are relatively few other pieces in Tokaido to speak of, but all of them retain the same high quality. The player cards are probably unnecessarily thick and come with a hole in them into which a player colour token can be slotted (which is a really nice feature) and the player meeples are larger than most and stand nice and brightly on the board. The manual is very easy to follow and includes examples, with perhaps just one slight rule ambiguity that relates to how curiosity cards should be scored (which I’ll detail later.) Overall, Tokaido is a beautifully presented game that should appeal to adults and children alike when laid out on the table. 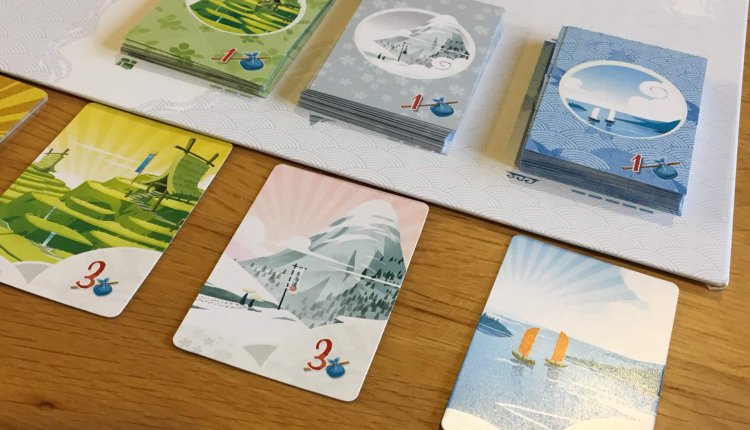 Turns in Tokaido are very simple, as long as you remember the basic principle that whoever is in last place will be going next (no matter who went last.) Each turn, the player in last place simply takes their meeple and moves it as far along the track as they want to, up until the next inn space. No matter what space the meeple is placed on, the player will get to complete the associated action (sometimes taking into account the ability shown on their player card.)

Locations to visit include Temples, Hot Springs, Panorama spaces for each of the three portraits, Market spaces, Encounters, Income spaces and Inns. These different spaces all offer different ways to score journey points or collect cards or income (which in turn also result in journey points.) The Hot Springs, for example, allows players to draw a card that will award between one and three points immediately, whilst the Market spaces will allow players to purchase curiosities from a randomly drawn selection of three – completing different sets of these awards various amounts of points depending on how complete the set is. Temples allow players to invest up to three coins (for one journey point each) whilst also adding to the total investment fund that awards more points during end game scoring.

There are also portraits to complete, encounters to be had and delicious meals to be enjoyed, but broadly speaking each turn is about efficiency. Is it best for you to skip ahead and take a chance on drawing the curiosity cards that you need, or is it more sensible to visit the adjacent Hot Springs for a lesser, but more consistent reward? This decision making becomes considerably more interesting at higher player counts because of the competition for spaces and long term rewards, whilst at two or three players, it is rare to see much skipping ahead due to the number of open scoring methods.

When the first player reaches an Inn, she will draw three meal cards and purchase one of them (if she can.) Each meal is worth six points (which is quite a lot) as well as a bonus at the end of the game. As other players arrive at the Inn, each will pick one of the remaining cards and purchase it if they can, again awarding them six points. It is possible for later players to miss out on a meal, which (due to the points value) is a key factor in deciding when to skip ahead in games with a higher player count. It’s also a factor that reduces strategy at lower player counts, but you could (as I did) introduce a house rule to simply draw one fewer meal cards than there are players (so that the last player to arrive will always miss out.) 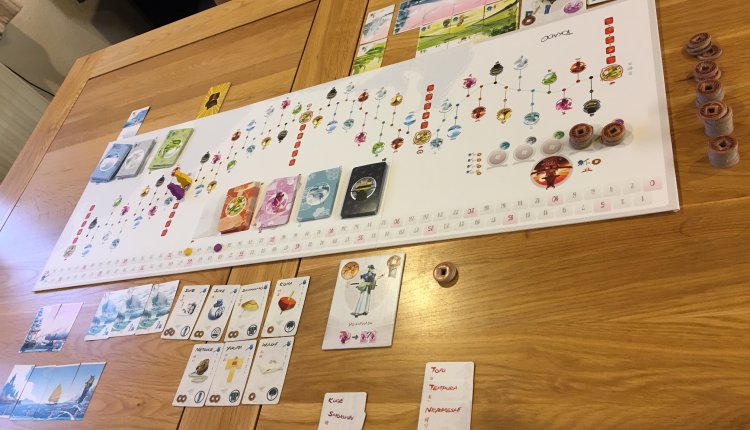 Now, you may be wondering why I have written so much about the importance of scoring efficiency – well the reality is that if you set aside the beautiful components and artwork, that is essentially all Tokaido is. There’s a beautiful simplicity to it that I really appreciate, but at the same time it’s important to be realistic about the weight of Tokaido and players that like having finer control over their destiny might be a little frustrated by it, especially at low player counts.

Where Tokaido really comes to life is with around four or five players who ideally have a casual interest in board gaming (but want something a little different to Ticket to Ride) or as a relaxing way to finish off an evening of heavier or more directly competitive gaming. I wasn’t kidding when I used words like tranquil to describe Tokaido – if you consider spaces like the Hot Springs, the game can be as simple as drawing a card and scoring the amount of points shown.

One feature that I did find a bit frustrating (although it is fairly luck dependant, which might be the point) is the scoring for collecting curiosities. Players draw three each time a Market space is visited and can purchase all three. Each card awards an increasing number of points as it draws closer to completing a set of four. If a player purchases all three (which is not uncommon) then a score of more than ten points is possible – this is hugely unbalanced compared to other scoring methods. It won’t always pan out like that, but when it does it can be hard for other players to come back from, especially at two or three players where it’s harder to skip ahead and remain relevant.

Tokaido may not feature any direct confrontation, but it’s certainly possible to edge out opponents by choosing to move to locations that they might want. For example your player might only score a few points for taking a panorama card, but it might also prevent her closest opponent from completing the panorama and scoring maximum points. There’s a lot to be said for a game that can deliver a competitive experience that feels almost completely non-confrontational and largely relaxing – in fact I would say that Tokaido is unique among my collection in that regard. 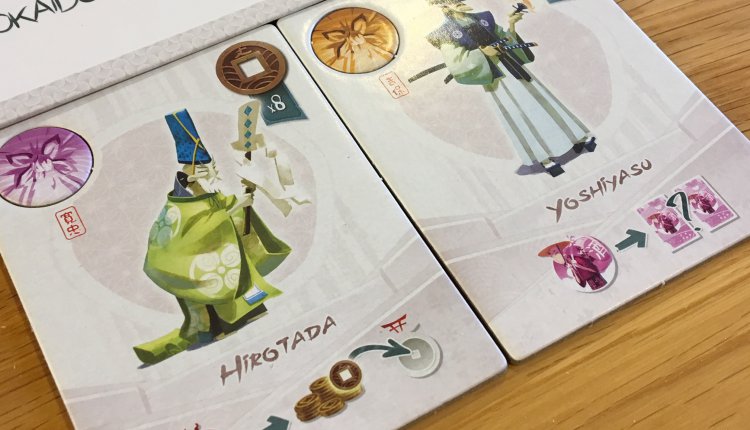 Tokaido is a beautiful game that offers a relaxing yet competitive experience that really comes alive with four or more players. It is very simple to teach and almost always takes less than an hour to play, which makes it ideal as either an alternative to the traditional gateway games or as a great choice to start or finish an evening with. It is very aesthetically pleasing (to just about anyone) and it is really well put together at a component level. If you’re looking for a light weight game that remains fun without being too taxing, you’ll certainly find it here.

A copy of Tokaido was provided for review purposes. You can find out more information about the game on the website of publisher Funforge.

Professor Evil and the Citadel of Time review — On the clock