Star Shaman is a VR experience that showcases a brilliantly colorful art style that punctuates its unique and sophisticated characters and has you blasting boxes to bits with your shaman powers.

Upon first glance at the game’s description, you’re bound to assume that Star Shaman is one of those rhythm games that has you slinging spells to the beat of some infectious tunes. While Star Shaman does have some great music tracks and will certainly keep you on your toes, it is not a rhythm game, and is more in line with an arena shooter, like Blasters of the Universe.

Your role as a shaman sees you destined to stop the evil attempts of a group called the “Architects of Entropy”, who wish nothing more than to convert all life into basic shapes, for some reason. The story itself is basic in principle, but there is more to it if you have the patience to read it all. It, unfortunately, is filled to the brim with blocks of text containing jargon so wild and sci-fi troped in nature, it makes the plot of Kingdom Hearts III look coherent in comparison.

The core gameplay in Star Shaman is enough to make it fun, though. It essentially is a roguelike shooter with a particular focus on casting spells and conjuring up weapons to assist you against the waves of geometric shapes looking to blast you off the very rock you stand upon. They rise into the sky before you, blasting down at you with dodgeable laser fire, which you can also block with your shield. Your ‘shaman sphere’ will help you dispatch them quickly, however. 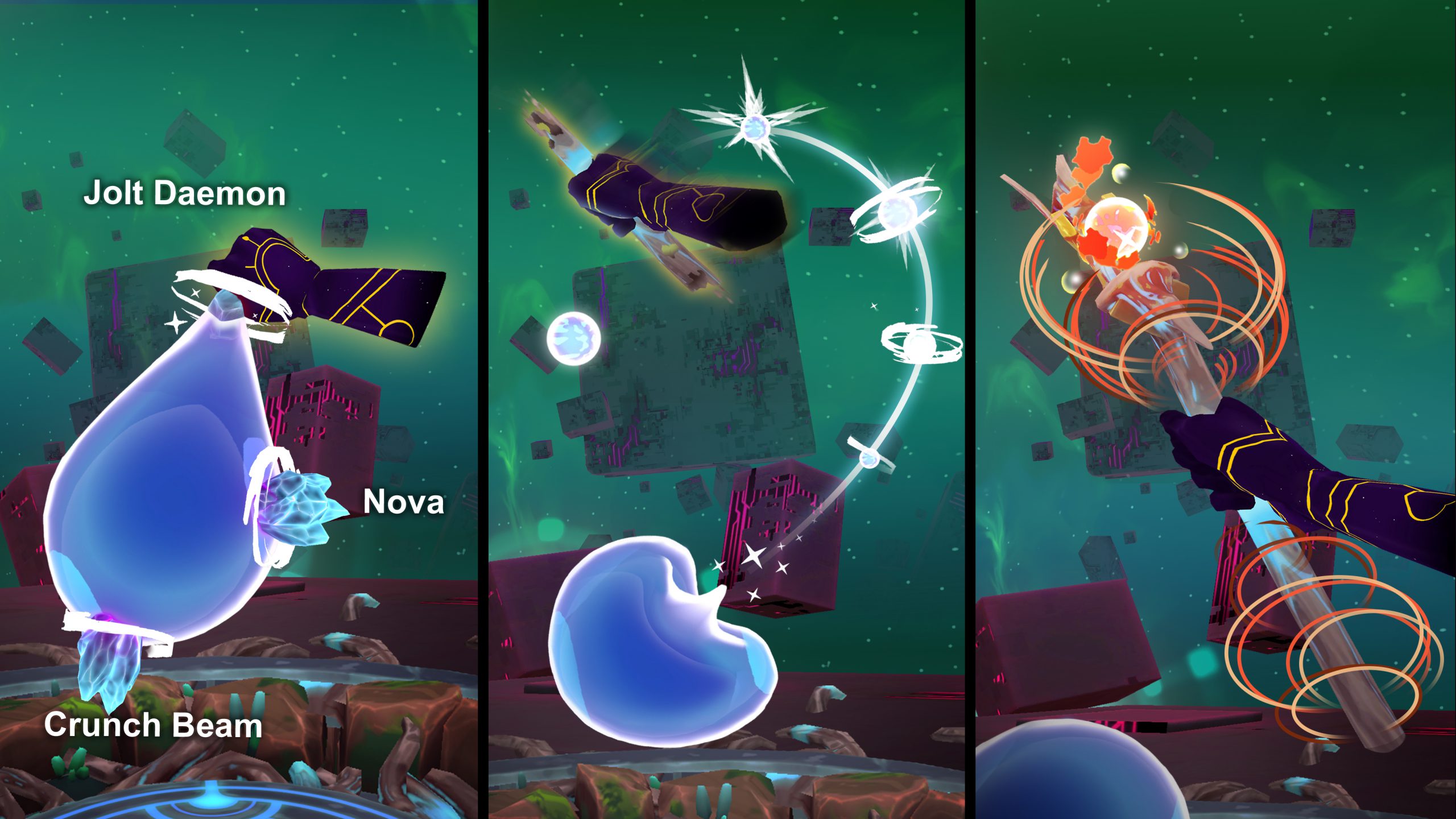 A magical blue orb that forever floats before you, the shaman sphere is your ticket to summoning your astronomical arsenal. You activate the spell by pulling on the sphere till it pops, which then activates the crystals within. Finishing the spell requires you to trace over the crystals with your controllers, which each have their distinct gesture pattern, depending on what you’re trying to summon.

This may be the closest you’ll get to dance through the battles, but it is probably the best part of the game and what will keep you coming back for more. You are required to do this each time you summon or reload your weapon, and while it may seem mundane, it adds excitement to the, otherwise forgettable, barrage of enemies in various colors that are shooting at you. Sadly, that’s not the only part you’ll be repeating. 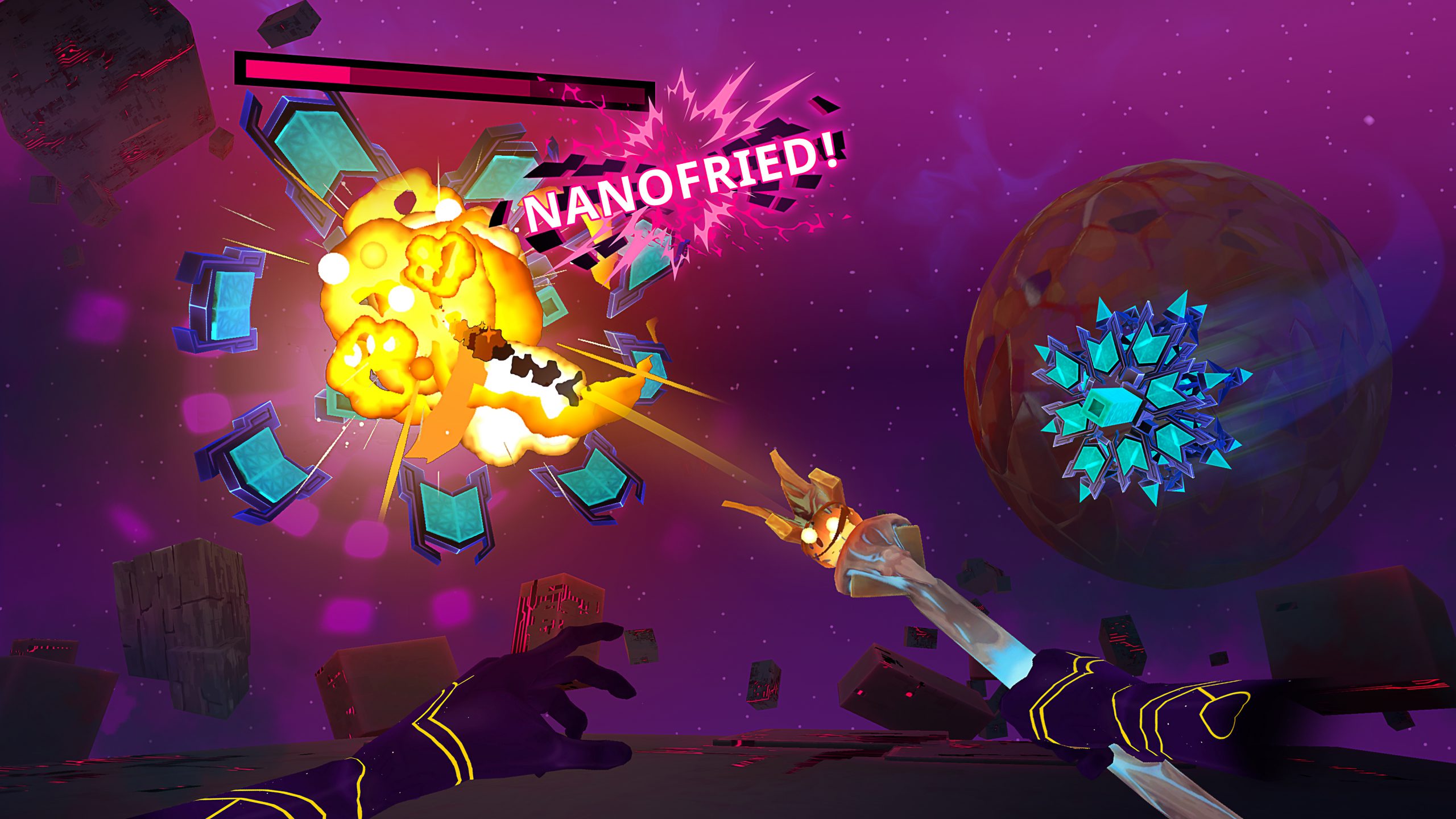 As a roguelike, Star Shaman fairs pretty well, offering runs that have persistent upgrades and abilities. What does not work so well is the necessity to repeat the starting area over and over again. The segment isn’t long, but you’ll beg for some variation after enough playthroughs.

Typically, it’s what is expected from the genre, but what isn’t is that the ramp up of difficulty is just unfair. You’ll be doing great at managing the waves of enemies, blasting them and dodging their fire, when all of sudden, you’ll be hit seemingly out of nowhere with a sharp difficulty curve, and it’s back to the start again. It makes the gameplay loop seem a bit cheap and to me, it was a point where I had to take a step back and reevaluate my strategy. I’m all for a challenge, but this is just a bit too drastic to see as anything other than poor mechanical design. 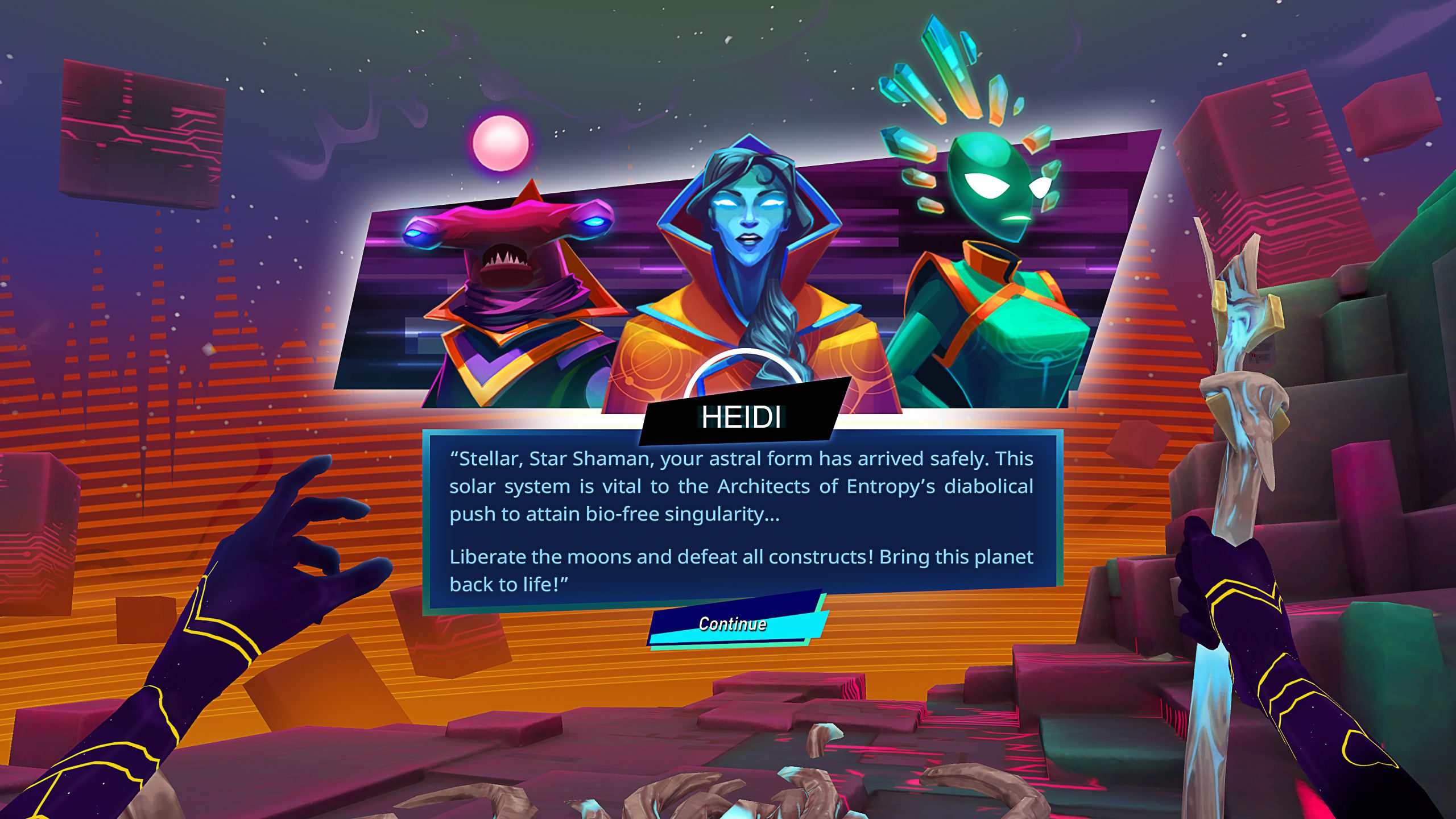 Let’s talk about the experience of Star Shaman. You’re going to get a lot of colors and smart environmental design in Star Shaman. The backgrounds, planets, and visual accents all coalesce into a gorgeous world to be shooting shapes in. While the character’s dialogue may have seemed dull to me, it could very much be your jam and you could get wrapped up in the craziness of it all. I personally felt overloaded with terms and non-sequiturs to the point of going cross-eyed, but I digress. The designs of the aliens and other figures in the game are top-notch, however, and really add joy to the experience of getting to understand what’s going on, for better or worse.

Star Shaman may just be a wave shooter at the end of the day, but it does enough unique things that it warrants a chance, especially if you’re looking for something new to play. You will feel transported to another world and the action is tough and engaging enough to take your mind off the craziness of the real world, if even for just a moment. That fleeting moment of escapism makes it worth it for me.

Star Shaman is available now on Oculus or Steam.