Six Gun Showdown is a two to six player card game that can take literally minutes to complete. The entire game comes in a small box, and is suitable for ages ten and up. This game is all about picking the right time to draw your weapon and having quick reflexes. Six Gun Showdown takes inspiration from Snap, and as such, it does a good job of quick fire gameplay!

Inside of this small box there are instructions for the game, decks for six different character types and six different dice. Each of these card sets have different colors and characters assigned to them, and they all take place differently. As does the dice, which keeps everything very interesting and you can play a character that best adapts to your play style. The general theme of Six Gun Showdown is pretty spot on, especially with how much the number six comes up. 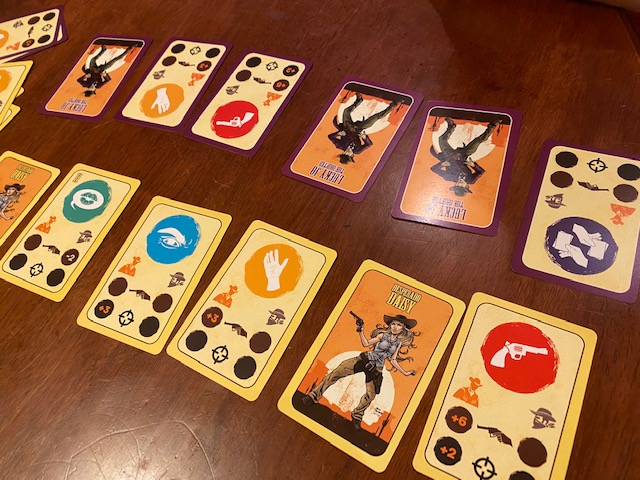 You will play the game by picking up your character’s deck and selecting six cards. These cards will then be placed face down in the middle of the table. Your opponent will do the same. Then, based on whoever touches their card first, you will one by one flip over your cards. These cards have pluses and minuses for things like aim and speed. When one of you flips over your red, shooting card, the other player will need to rush to touch their shooting card quickly, before you tap one of their cards. If they beat you, they can reveal their card, and if it allows them to shoot, they can shoot alongside you. Shooting is done by rolling your character’s dice. You need to get more than six in accuracy to get a shot — and it’s done by the highest speed. You will need to count up the pluses and minus effects on the cards laid out and use that, along with your dice roll, to see if you actually shot the other player.

Once someone is shot, the cards that have been flipped get discarded and the rest go back into your deck, where you need to choose six more, lay them out, and start again. The gameplay is extremely fast — someone can actually shoot on their first flip of their cards, though gaining some stats and trying to flip some cards that could affect your enemy is ideal. 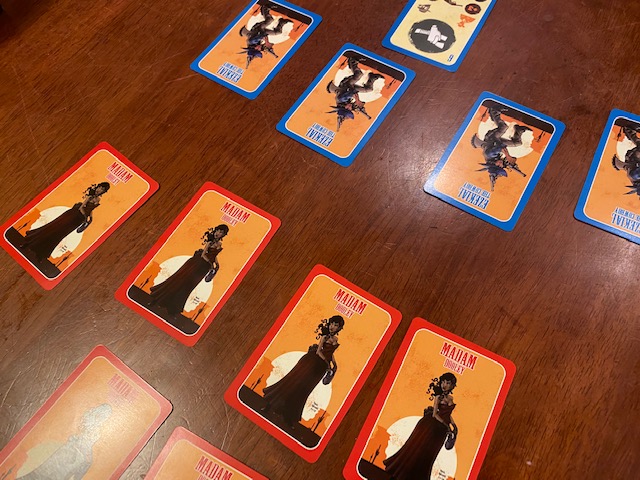 Six Gun Showdown feels like the type of game that if you continue to play it with the same people, they will slowly develop their own strategy and rhythm to the game, creating something fun and meaningful out of the long term gameplay. It’s simple but it’s fun — especially for those who like games like Snap. And having a bunch of different characters to play from allows you to have variety in the game, as you can quickly switch to a new character if things start to feel a bit redundant.

Six Gun Showdown can be found on Redwell Games’ website.