AnShi is a wild game about an alien who rides its hoverboard through vast, exotic landscapes in order to activate memories from its ancestors’ past.

In AnShi, the first cutscene gives you a general idea of what’s going on: a star explodes, knocking your spacecraft off course, which then crash-lands on a desert planet. Your creature climbs to its feet and makes its way outside, grabbing its hoverboard on the way out, and quickly discovers it crashed deep into a cave.

As you zoom around the cave on your hoverboard, you eventually find a black portal that seems to be covered in stars. Upon entering the portal, you are whisked away to an alien ship and introduced to the only written dialogue in the game: symbols that you must decipher to learn words that represent the level or predicament that you are in, given to you by your alien elders. You then exit the craft with a new word and follow glowing orbs to your next destination.

While that initial description may sound a bit odd, it’s only the beginning. There are a lot of things going on in AnShi that you never really are certain of their meaning. AnShi is advertised as an experience, and it plays out like an interactive story. You move your character along a predetermined path, see some cutscenes, and then follow the visual cues to the next area. 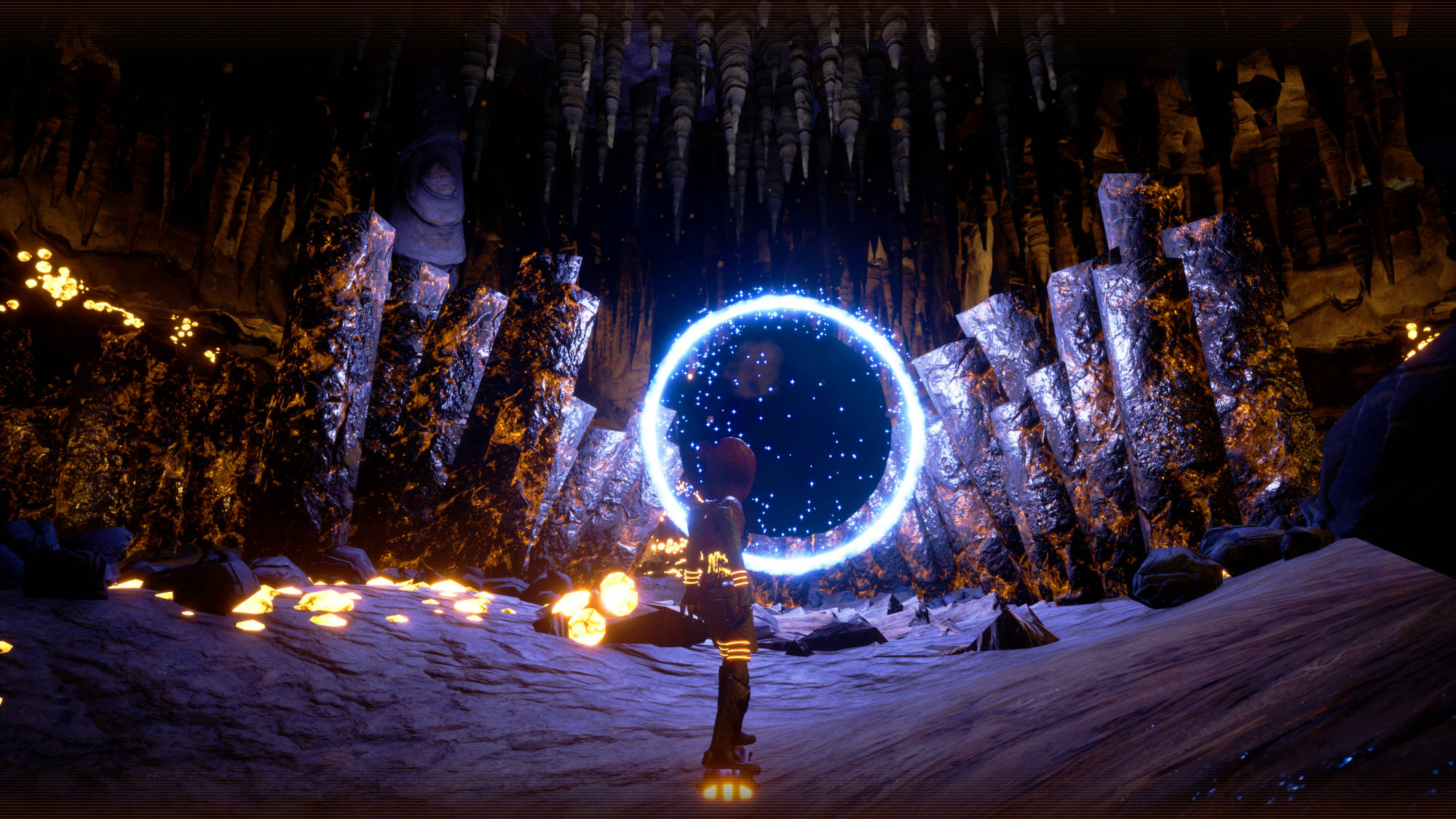 There are some collectibles to be found through the open-world exploration of this derelict planet and some memory fragments are needed to proceed to the next event, but it ultimately leads to a rather linear pathway, and I feel that is fine, considering the type of game this is. You sometimes might feel lost, but you can typically see your next destination due to lit up white balls of light, that are sometimes indicated by a beam of light, that makes it easier to see. The hoverboard is fun to pilot, and there are plenty of platforms and ramps for you to jump off that adds a bit more to the ride.

Each event that happens through this experience has a certain beauty to it, as there is a lot of bloom and lighting effects used, sometimes with particles and plants that grow, but it is up for the player to decide what it all means. I can’t help be reminded of one of my favorite video games, Journey, whilst playing, as it also had no dialogue to speak of and was very alien to the player as you had to figure out the purpose of your pilgrimage and what it ultimately cost to see it through. 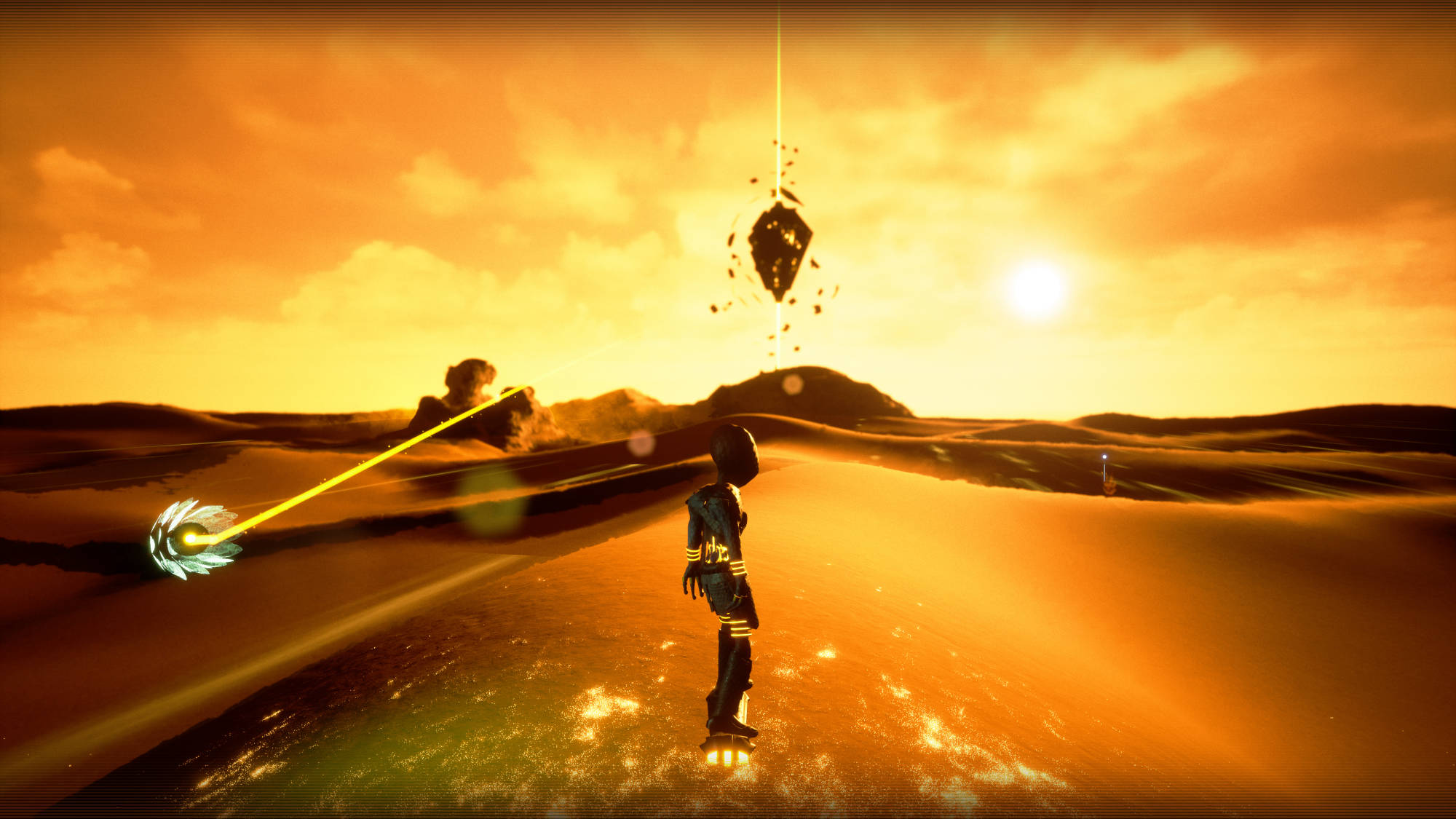 You’ll likely notice some animations of your alien creature that seem a bit off when he moves through an environment or especially when he pulls his hoverboard off his back or goes to put it away, and that is due to the animations being motion-captured. I think that there are certainly some benefits of the process, as it allows artists to express real-life animation digitally, but here, there seems to be little post-editing done to the animations and therefore it passes beyond the scope of believability. I never minded it during the experience, however, as I went into playing through the game knowing full-well that the indie title I was playing was created by a sole developer and therefore would have to make up for its lack of technical detail with some useful tricks. The game certainly has a fair amount of charm and, more often than not, that outshines any technical limitations that could otherwise be scrutinized.

The thing that kept me engaged throughout the entire ride that is AnShi, is the god-tier masterwork that is the soundtrack, which was created by Devel Sullivan. I never felt truly lost, as the music carried the emotion of the journey through its appropriate tones and moods that swayed as I pressed further into the story. It also reminded me a bit of the soundtrack of Journey and how perfectly it captured and portrayed the audible emotion of the gameplay. The instruments used in AnShi have a foreign and almost Arabian aspect to them, with plenty of bells and tinkly instruments to dazzle and capture the spirit. The tracks all seem to perfectly loop and I felt myself continuing onwards in order to hear more of this eclectic mixture of beauty and punctuation, as well as try to grasp the purpose of the alien’s mission. 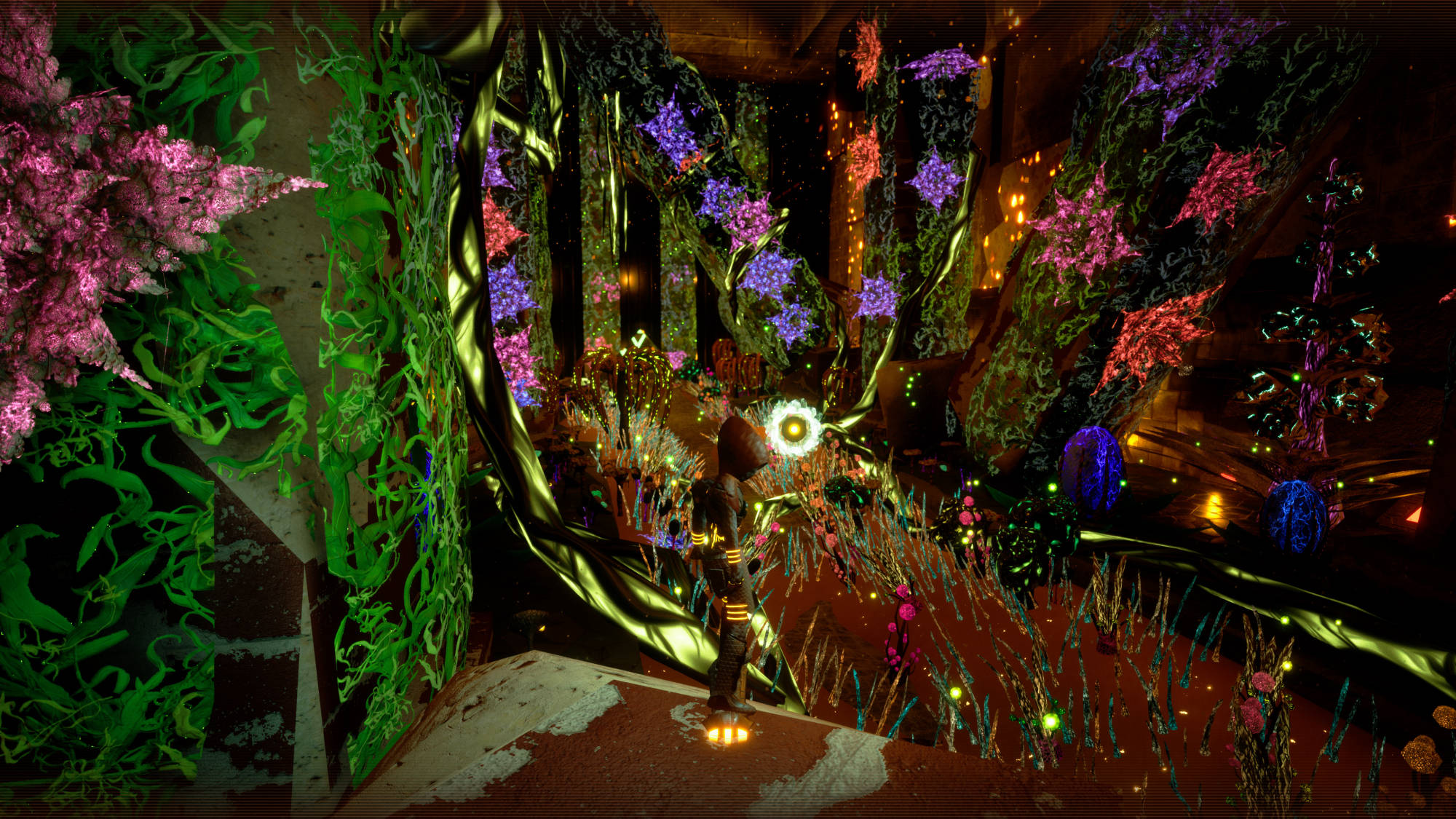 While AnShi is certainly not a game for everyone, it’s priced as an interactive story or rather a cinematic piece of entertainment that can be enjoyed in one sitting and appreciated long after. There are a bunch of things that happened during my playthrough that I still feel like I don’t understand the intensity or focus on, but who am I to say what an artist’s intention is when he makes a brushstroke? The soundtrack is certainly something that will also stick with me for a long time, and I feel like the game was so much better with its inclusion. Ultimately, I think the wild experience of AnShi is worth the visit, and will definitely give you something to think about long after the credits roll.

AnShi will be available February 22nd on Steam and is also planned to release for Nintendo Switch this year. Check out their website for more information about the game.