Jump from shadow to shadow as a Schim, a shadow-surfing frog, in the cool 3D puzzle game of the same name.

I don’t know about you, but with me there are games that simply keep cropping up. You spot them early in development and then they just keep appearing over and over again as they move forward to completion. Schim has been one of those for me. Perspective and shadow puzzlers suddenly became a very cool trend a while back, but few of them actually made it any further in development than a quick mechanic trial. Schim persisted though, and after playing it at WASD earlier in the year, I’m so glad that it’s still a thing.

Schim is beautiful, and I mean that. Each level is in a limited colour palette; A colour, two darker shades of it, an almost black version of it and sometimes white, to accent it. This makes each level look like something from an old school textbook, or a punk or alt-zine, the kind that prints on coloured paper to save on ink. You move from shadow to shadow, moving around in the non-space cast by the world’s objects. A couple of levels in and you’re leaping into the shadows of moving objects, following a jogger around a park in order to get to the next part of the level, and soon after you’re tinkering with objects to change the way that objects cast shadows; Favourites of mine include opening umbrellas or twanging boards to launch yourself greater distances. 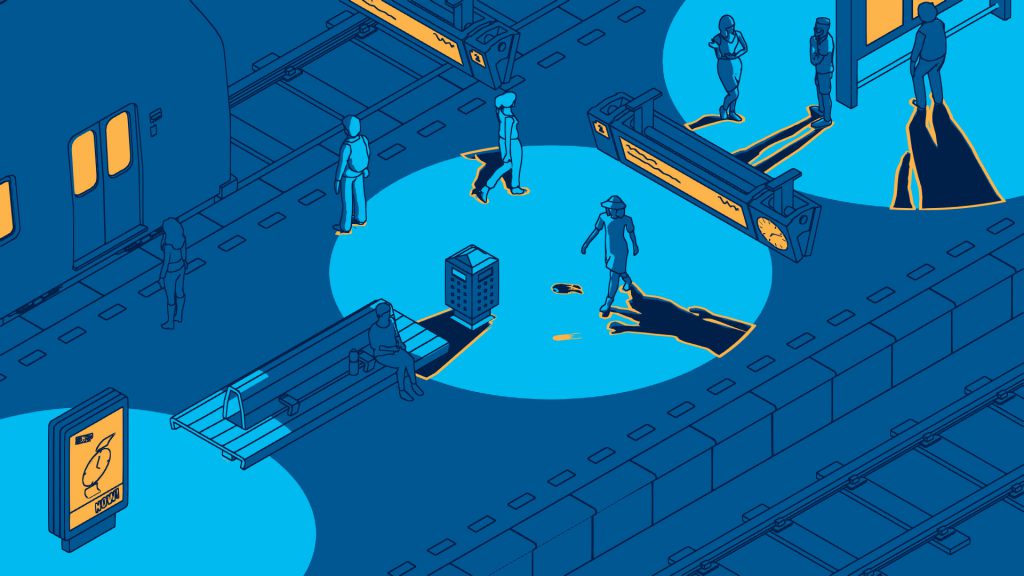 It all feels really calming and deliberate, and even when you miss a jump and pop out of existence, Schim has been designed well enough that you can tell that the fault was yours and a little bit more care in your timing can deliver you to where you need to be. Perhaps my only complaint was in how long it takes for each level to spell out your objective, each one begins with a slow pan across the path you’ll be taking — which is very useful to show you some of the choices you’ll need to make, but might be more valuable as a tool system rather than an introduction to each challenge. But, that’s a tiny niggle. Schim is captivating, the simple beats and splitting noise of the leaping frog are really charming, and that combined with the simple colours makes it instantly memorable.

Schim is expected to launch later this year for PC, Mac, Linux and consoles