The original game Rez is a unique piece of art where music meets gameplay in its purest form — a synaesthetic synchronization of blaring music and lasers. Rez Infinite distills the original game into a timeless masterpiece with upgraded graphics, audio, and most importantly: it brings the digital world of Rez into virtual reality.

At first glance, Rez Infinite looks like an odd, independently-developed take on a rail-shooter. There’s what seems like programmer art everywhere, each section of the game is short and you only face off against a handful of enemies, and then it’s off to the next area. That is ultimately one of the greatest things about the game, truthfully, because even though you could watch a video or someone else playing the game, it begs to actually be played to be enjoyed.

With a controller in hand you descend into the first area of the virtual world, where everything is digital and swarms of low-poly viral enemies shoot large, slow-moving missiles towards you. An electronic hum drones on as you fly into the screen, past an infinite landscape of red lines. Two ships fly your way and you have a choice: lock onto them by holding the fire button or eliminate them one by one. You decide to chain your attacks and let go of two blasts at your adversaries.

The clicks when you lock on, and the subsequent barrage that you unleash, all deliver chimes that line up to a beat that seems to be bubbling underneath. The red lines become an equalizer chart, displaying your successes in visual code. After a couple more waves of ships, you find and destroy a ‘data node’, which explodes in a rainbow-colored shower of light, and you are whisked away to the next layer. It is then in the second layer that the beat reveals itself, and you begin to understand the musical progression, the synced gameplay, and the trance-like nature of what Rez Infinite offers you. 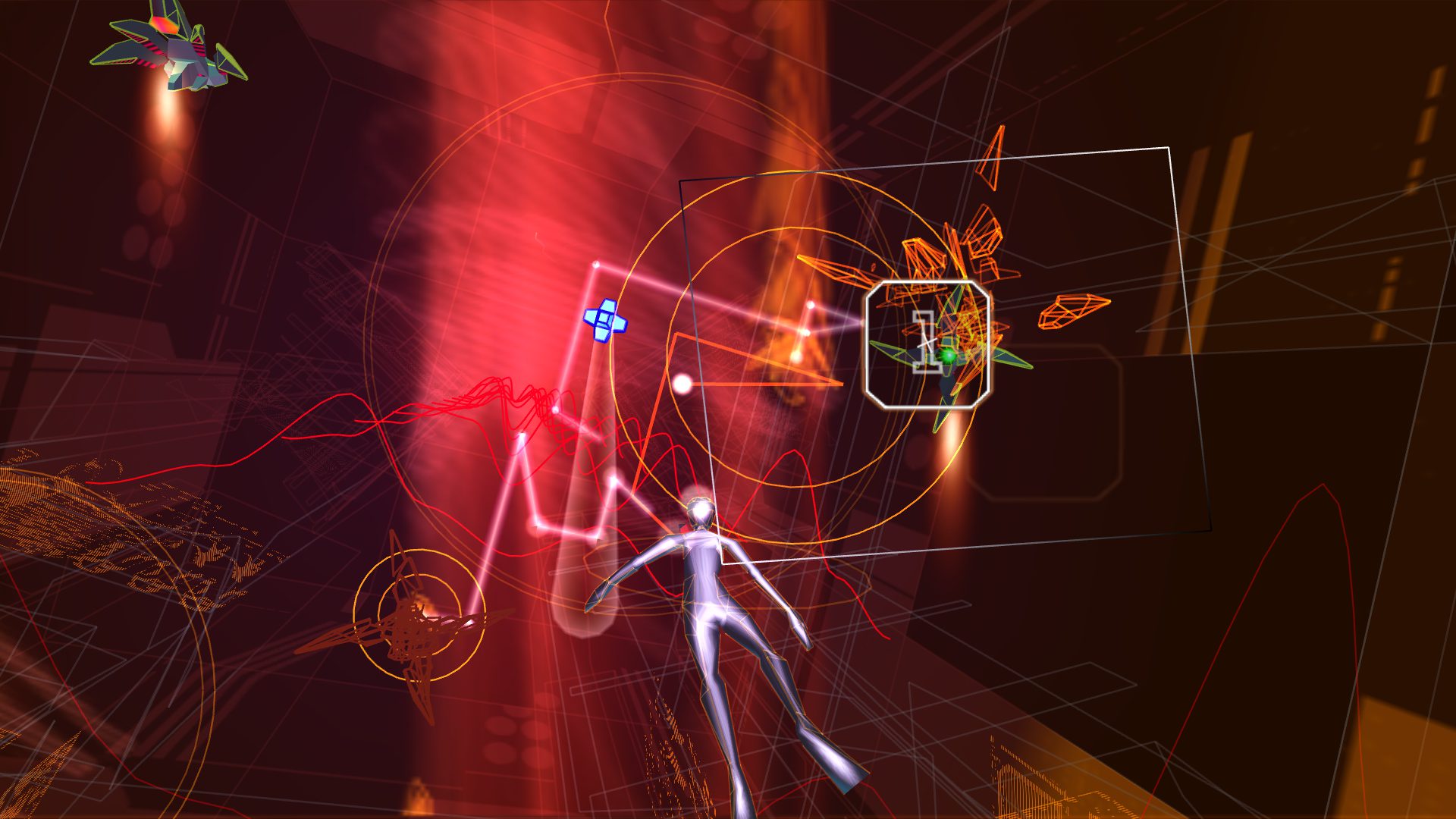 Each layer offers new challenges, more enemies and the environment itself changes, too. With this metamorphosis, the music gets more complex, and the song moves along till you reach the tenth layer, where the boss is. As you defeat enemies with combos, they will drop healing items that will raise your evolution. You start as a wireframe human but can evolve all the way into a pulsing ball of digital plasma, and the higher level you are, the more damage you can sustain before a game over. Additionally, there are overdrive nodes you can collect that will offer you the ability to automatically fire your beams at all the enemies or targets on the screen. It’s a good way to eliminate foes when their amount seems overwhelming.

Bosses are waiting for you at the end of each stage, each one is named after a planet. These security programs are set up to keep intruders out of the system and will try to eliminate any external threats. While most games use puzzles and similar, smaller enemies to teach players how to defeat the boss at the end of the level, Rez Infinite requires you to learn what to do as you experience the boss fights for the first time. 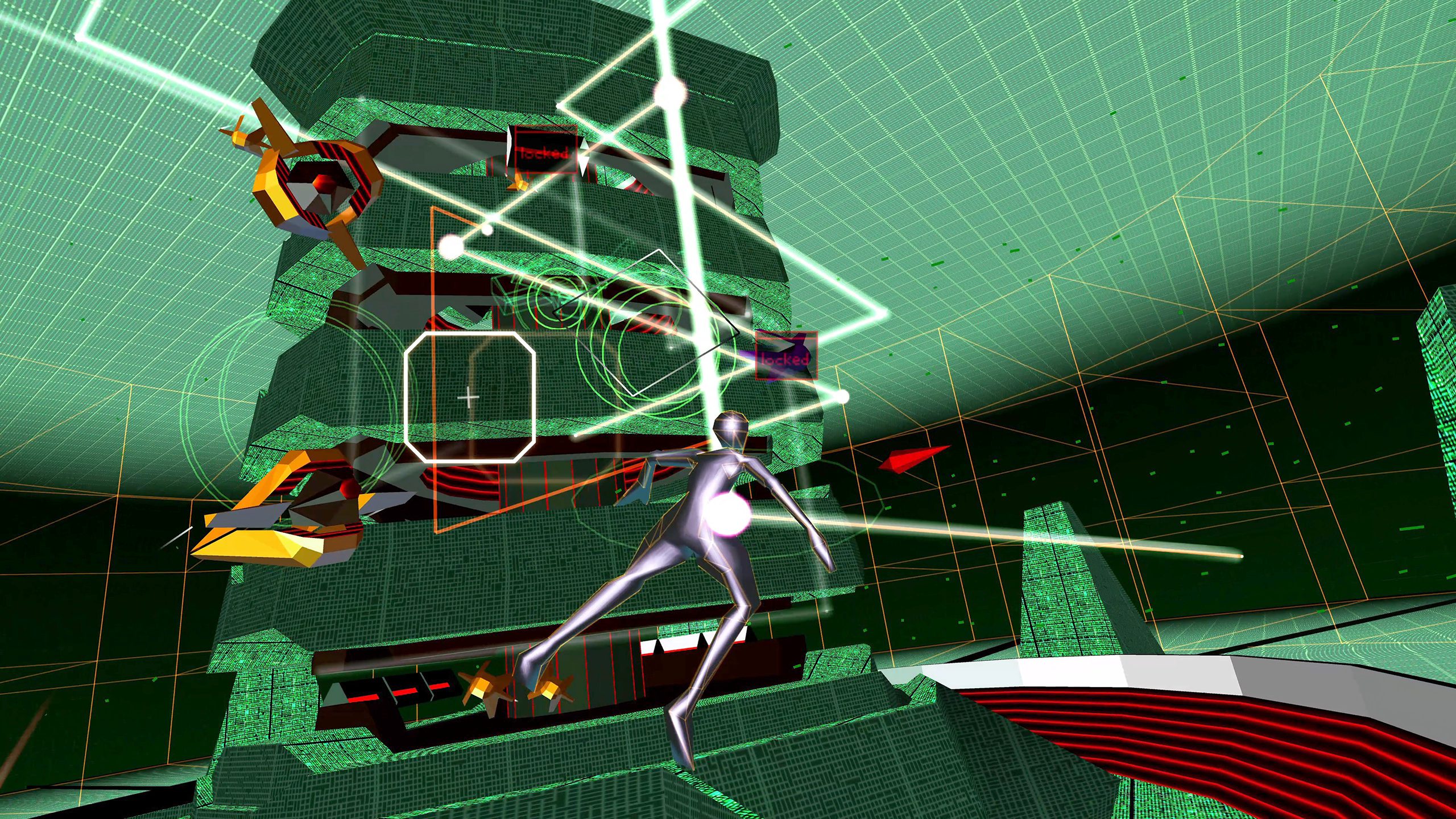 This may seem like a challenging process, but there’s not much to the game’s gameplay loop in the first place, so if you focus on key weaknesses and keep firing beams their way, you’ll eventually defeat them. Each boss is completely different than the one before it, and as would be expected, they showcase the best that Rez Infinite has to offer. The music is fully realized by this point and has come to its strongest melody and beat, and the larger than life digital monstrosities that you are up against will strain your hand-eye coordination to its fullest. Each attack explodes in a victory of music and vibration, signaling to you that you are fulfilling your goal of destroying this guardian, and as you send the final blow, the boss shatters into wires and polygons and fills the screen with a bright, exploding cloud of light and color.

It can’t be overstated how much virtual reality adds to this game. You can literally spin yourself around, surrounded in 360 degrees of low-poly, but often gorgeous, environments that pulse to the music that you help create. Beams from your wireframe warrior and missiles that sail towards you seem so close as you could reach out and touch them. It really feels like you are hacking into this mysterious digital frontier and each action you contribute to this world resonates in response with a click, a chime, and an explosion for your efforts. 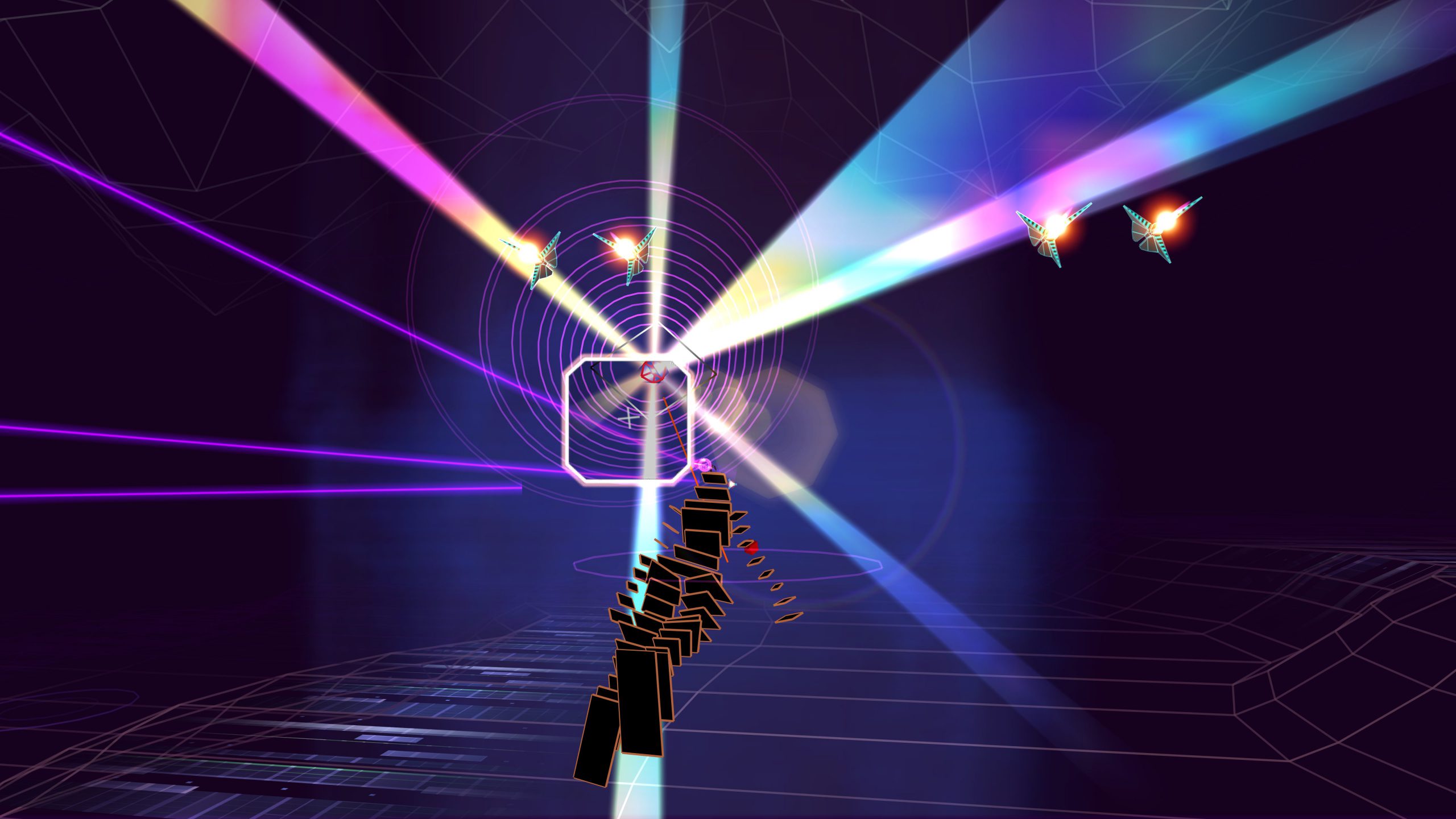 Rez Infinite is easily the purest form of virtual reality entertainment, given how well the story and function of the headset coexist. The fact that it takes roughly an hour and a half to beat the main story also lends itself to a full playthrough of the game, and that sweet spot amplifies the game as an experience more than anything else. When you don your VR headset, put on your headphones, and start up Rez Infinite, the world around melts away, and it’s just the experience of this colorful, often beautiful, musical ride of a lifetime that grips your senses and envelops you in a state of pure bliss.

While the original game offered many other modes, such as a boss rush and a trance-like ‘travelling’[sic] mode that provides invincibility and lets you flow through the game at your leisure, the new Area X in Rez Infinite is something else entirely. If Rez was the first game in the series and Child of Eden was its spiritual sequel, Area X is a taste of what a third game in the Rez trilogy could look like. The core game plays the same, but there’s also a lot of changes. 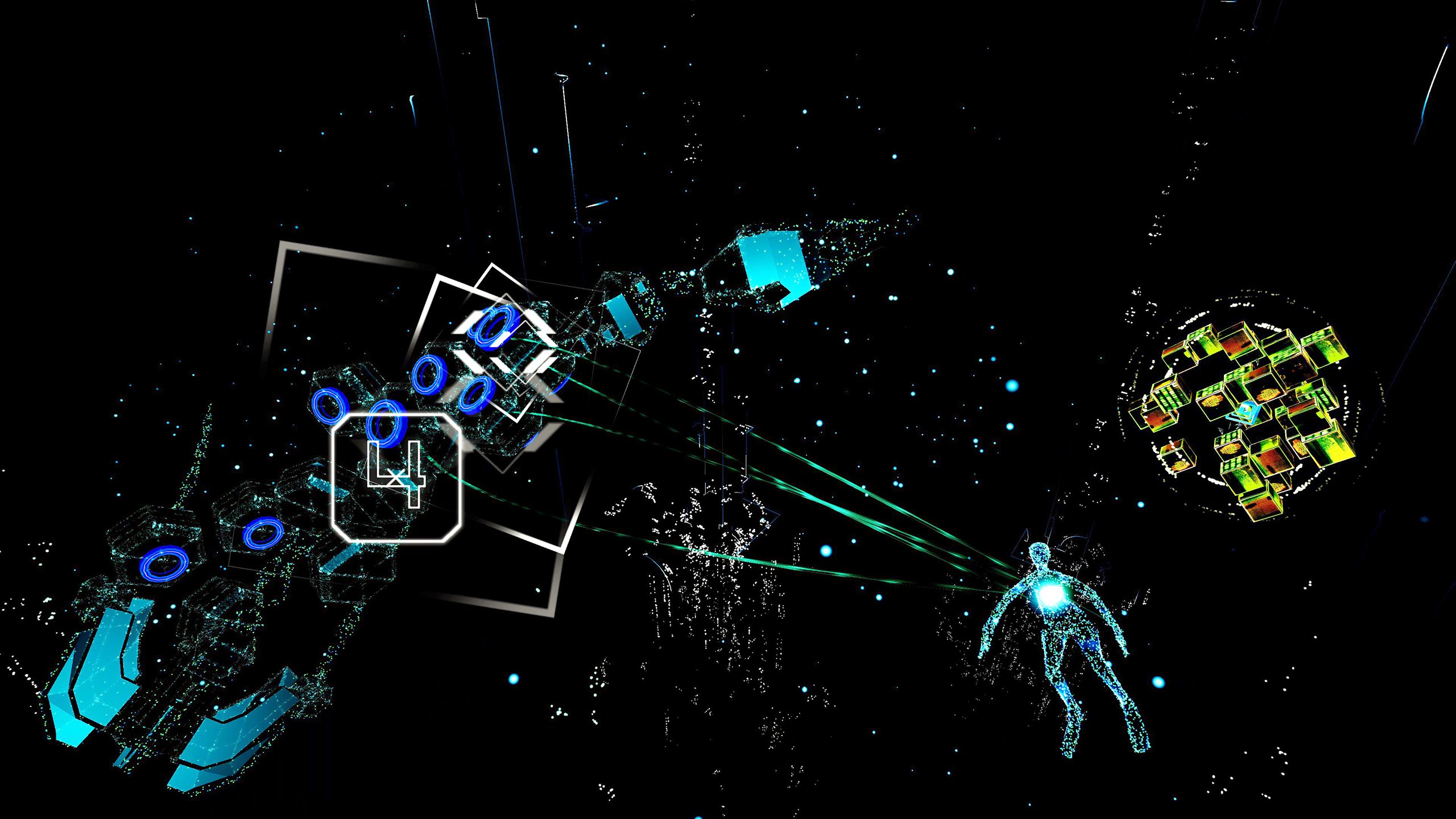 Even though Rez Infinite has upgraded the textures and resolution of the game, the look of it all is relatively the same. Area X uses mostly particles as a means to display graphics, as there are often thousands of sparkly white or colored dots floating around you at any given time. Each enemy explodes in a cloud of colored pixels, the effects of moving between areas is handled with a swirl of particles, and overall, it permeates everything visual about the mode. That amount of particle effects are a technological marvel when done right — thatgamecompany’s Flower comes to mind — and even though sometimes it may seem like overkill, it certainly fits the game’s style. 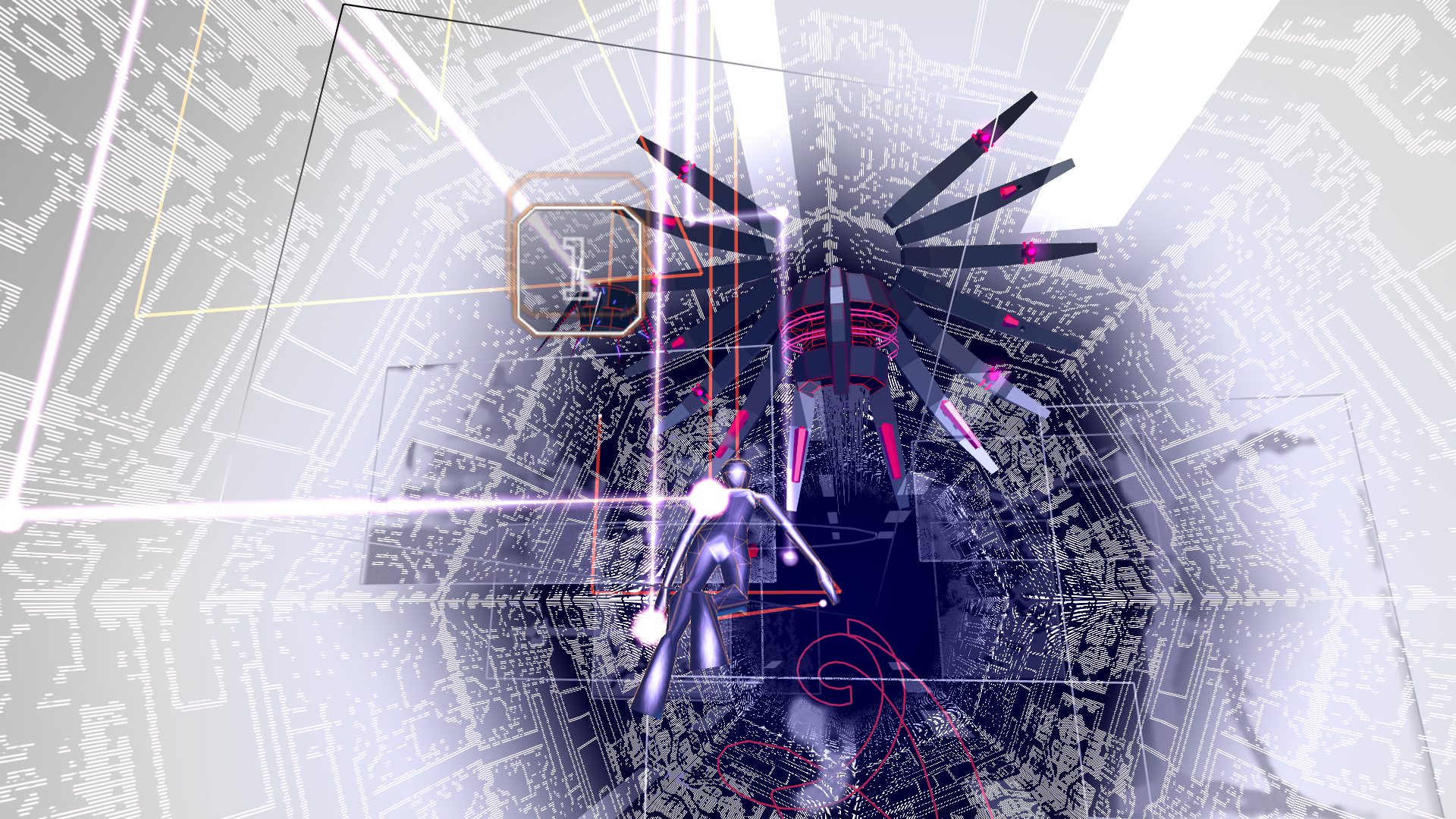 The new music by Hydelic is gorgeous and fits perfectly with this new version of Rez, too. It’s a bit of a departure from the original soundtrack, which was mostly techno and industrial-styled tracks and was popular at the time of its release, as it consists of Vocal House tracks that electrify with synths instead of the industrial bang of chimes and heavy drums. Adding this handful of tracks to an already pulse-pounding array of bangers rounds out Rez Infinite’s soundtrack to a perfect balance of old and new.

Rez Infinite takes a great game and makes it excellent, adding content and a brilliant HD sheen to it that retains the original vision, but brings it into the modern gaming era. The VR in the game is the perfect pairing with the story and gameplay and really adds to the experience, putting you in the middle of the action like never before. The whole experience from beginning to end is a rollercoaster of emotions, accentuated by a visual buffet of eye-catching graphics from a bygone era that somehow remains just as beautiful today. Check it out in VR if you have the opportunity, but don’t miss this killer version of one of the best games ever created.

Rez Infinite was reviewed on the Oculus Quest. It is also available for PC or Playstation 4.

Unpacking has you moving into spaces, putting your life together.