The Dungeon of Naheulbeuk: the Amulet of Chaos — “Tis but a flesh wound”

The Dungeon of Naheulbeuk: the Amulet of Chaos takes the humour and silliness of Monty Python and mashes it with a tactical RPG, all while parodying fantasy tabletop games like Dungeons and Dungeons. I imagine some of you are sold on that alone.

I’ve played a few tactical games for B3 at this point, Corruption 2029 and Necromunda to name a few, but I haven’t played one quite as rowdy, funny or unapologetically wacky as The Dungeon of Naheulbeuk: the Amulet of Chaos — Yes, that is the full title. It may sound a bit gimmicky, but within the first few minutes, you’ll be hard-pressed not to have a big smirk across your face. It’s pretty standard-fare fantasy stuff, but it is a visually impressive one. Characters and enemies are full of colour and detail with cartoon-like graphics that reminded me of old cartoons, and environments managed to feel just as lively, even if they were just grey walls and chains at times.

You play as a party of 6 ragtag heroes, The Dwarf, The Thief, The Elf, The Wizardess, The Ogre, and the Ranger, as well as an additional member of your choice after a certain mission. You sent on a quest to find the 12th statuette of Gladeulfeurha, all whilst navigating your way through the Dungeon of Naheulbeuk. That was a mouthful. For the most part, the plot is relatively simple and believe me, it wasn’t exactly selling me at first, But then the dialogue starts. Right out the gate, it becomes clear this isn’t your typical adventure.

Each of the party members represents all the best and worst of stereotypical fantasy and tabletop characters, all bursting with personality and charm that made conversations and cutscenes a joy to listen to. With party members often hurling abuse and witty dialogue back and forth between each other, they more often than not got a good chuckle out of me; especially when the dwarf beings throw expletives around like it’s no one’s business. I mean they even worked in a Skyrim arrow to the knee joke.

That being said, I would be lying if I didn’t say it started to become more irritating than humorous at times, it’s a difficult balancing act when parodying and there certainly was times where it let itself down in this regard, especially when the game is a rather lengthy one, with my playtime clocking in at around 25 hours. 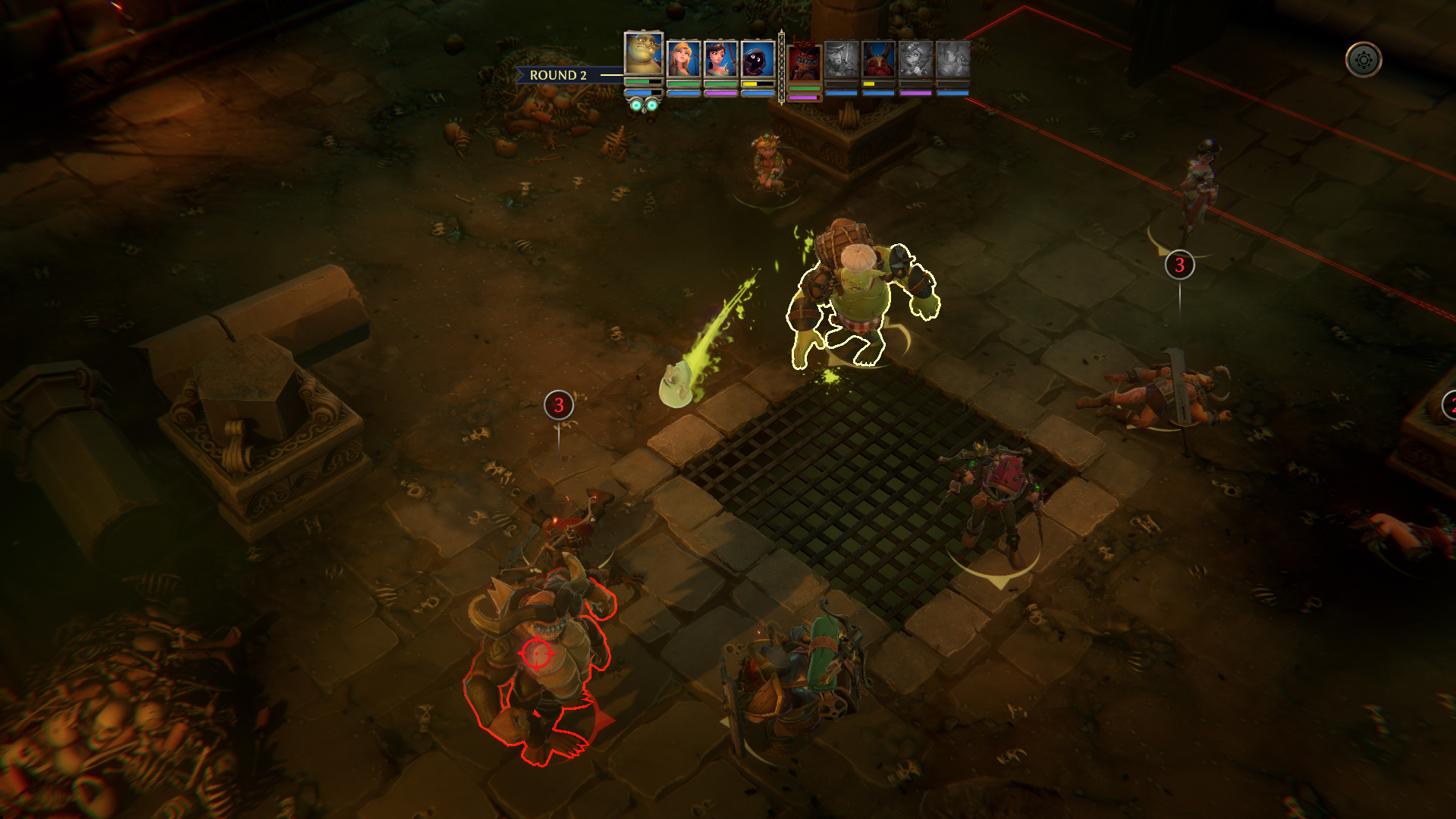 So, it’s got charm and it’s funny, but what about gameplay? Well, it’s fairly standard if you have played a tactical game before. All the usual aspects are here, turn-based actions, hit percentages, positioning and what have you, but it’s the addition of a few twists in combat that keep things from growing stale. One of which is RPG elements. Each of the adventurers can level up to increase stats and unlock a decent skill tree with abilities — both passive and active — that give some variation to how they can play. It’s not quite as much as I had hoped for, but it’s enough that you can tweak your party to fit into a certain type of strategy a bit more freely.

Environments also play a decent part in combat, as traps and objects can be triggered by destroying or using abilities such as the Ogre’s belly slam to push and move enemies across the arena; a mechanic you’ll often be taking advantage of. These aren’t new ideas, and it’s certainly not winning any awards for originality in that aspect. But in the moments when all these different mechanics come together, it’s certainly satisfying to what it all play out as your master strategy comes together perfectly.

That being said, the game certainly came with a few issues. For one I had some serious problems with frame rates. Often making the game freeze completely for a good ten seconds, it wasn’t helped by the constant jittering and stutters at certain points of the game that made sections infuriating to play. There were also a few issues with audio at times, with certain lines of dialogue missing or spellings errors, but these were much less noticeable in the grand scheme of things. Plus, maybe a few tweaks to gameplay and balancing here and there wouldn’t go amiss. 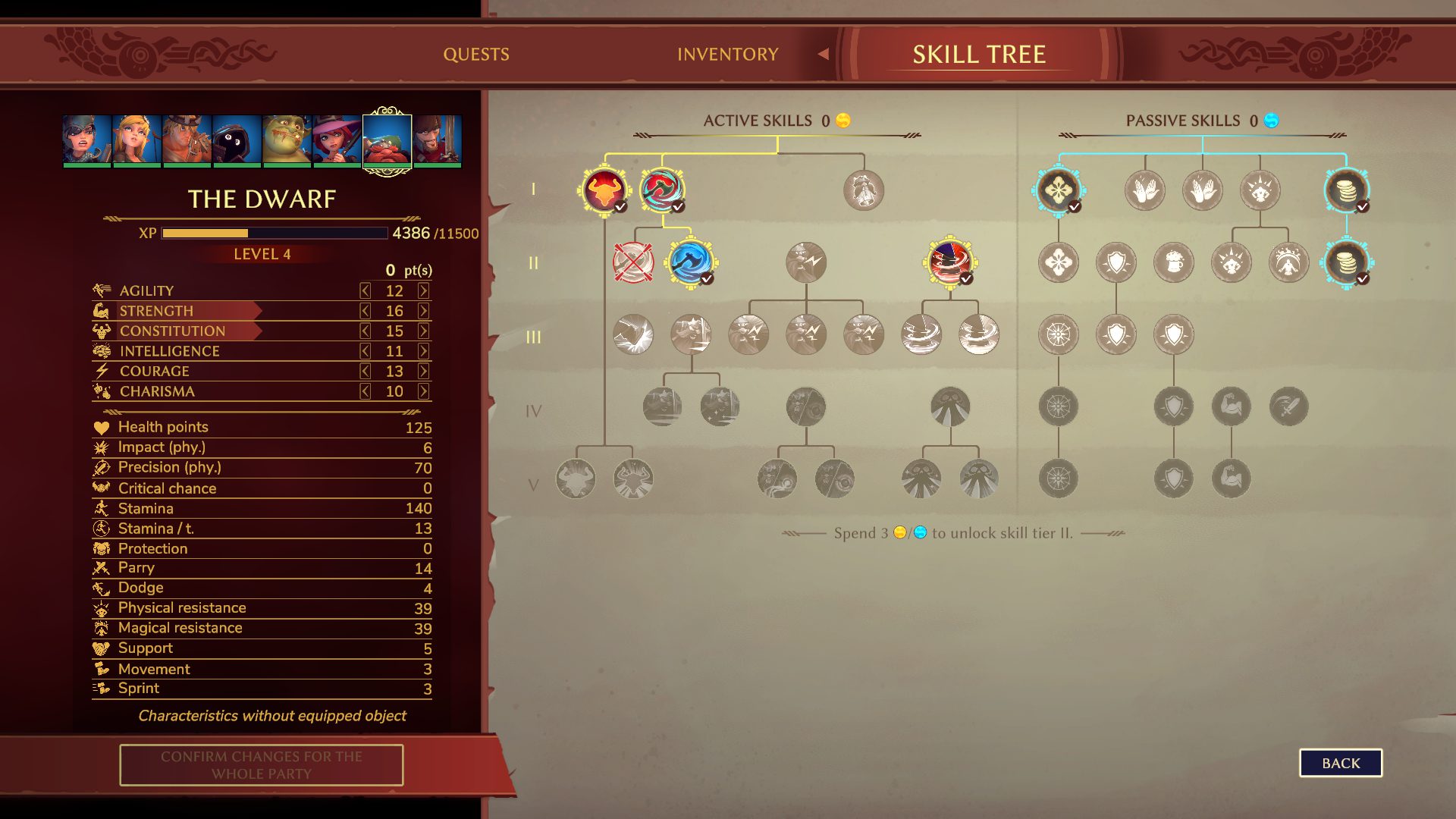 Though that’s not to say the game is a pushover. Even on easier difficulties, I faced some tricky battles that gave me a good-hiding more than once, and having a string of unlucky moves doesn’t help. Thankfully missing attacks and critical failures don’t sting quite as much thanks to the randomia gauge. With each misstep or unlucky move, this gauge builds up energy that can be used to cast helpful abilities like healing party members, with better ones available the longer you let it build. Still, I can’t imagine what it’s like on the highest difficulty, or with the iron man mode turned on, which adds permadeath into the mix.

The Dungeon of Naheulbeuk: the Amulet of Chaos is available for PC, Mac, and Linux, and will be available on PS4 and Xbox One sometime next year. Check out the Developer’s Website for more details