Steamworld Dig 2 does exactly what a sequel should do, it’s both bigger and better, yet holds true to the series’ legacy.

There are very few Indie games that I have picked up and could not stop playing until they were beat. Stardew Valley, Legend of Grimrock, Cat Quest, Owlboy, and my all time favorite, Transistor, just to name a few. Another was Steamworld Dig which I stumbled upon after getting it from a Humble Bundle. There was just something unique about that game which just clicked, it was addictive, fun and kept things going at a great pace. Next thing I knew, it was all over, and Vectron was defeated.

Here we are with Steamworld Dig 2 and it’s deja vu all over again. Things pick up right where they left off and I couldn’t be happier. If it isn’t obvious, I loved Steamworld Dig and pretty much every aspect has been enhanced, magnified, and gone over with a fine tooth comb. Fanboy aside, this is a game about digging, platforming, and minor combat. If you didn’t like the first game, then move along because Steamworld Dig 2 masters what it began in its first iteration. 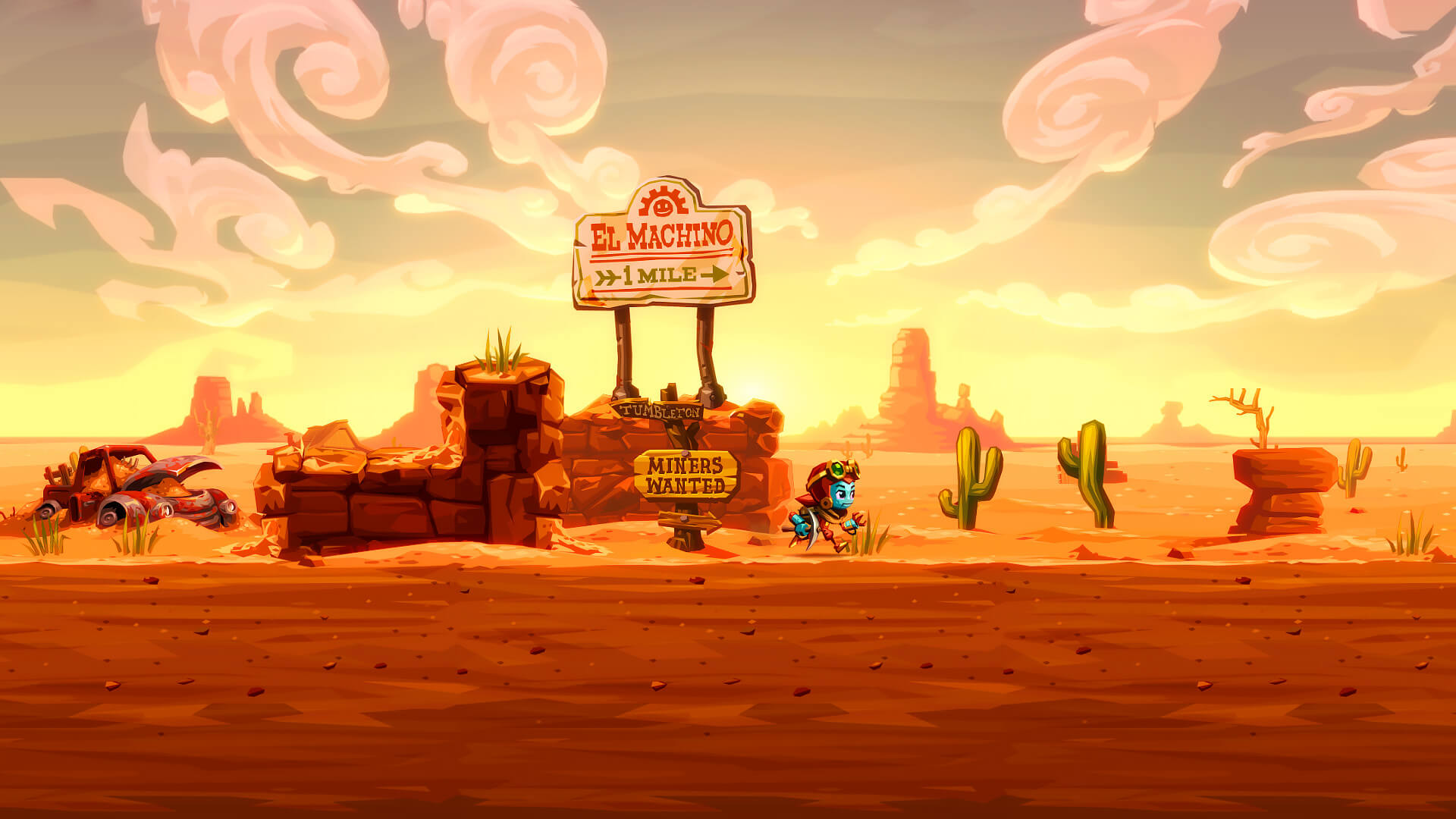 O Rusty, where art thou?

In case you don’t know anything about the setting of Steamworld, it’s a mix of steam punk and western. From debutantes, corrupt town mayors, and rootin tootin cowbots, Steamworld is a unique world inhabited by Steambots and mystery. In the first game you played Rusty, a silent type who had a penchant for mining. To make a long story short, Rusty found himself in a bit of trouble with a big bad ancient evil machine called Vectron. With pick-ax in hand and nothing but the oil on his brow, he smashed that evil machine into smithereens. 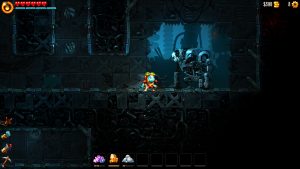 After that everything gets a bit hazy and Steamworld Dig ended rather abruptly, some would say. In Steamworld Dig 2 you play Dorothy, a former friend of Rusty’s and daughter of the mayor Hank McCrank(love these names) of Tumbleton. After destroying Vectron there was a massive quake and Dorothy sets out to find Rusty and follows rumors to a new town, and there her own adventures begin.

From crazy cultists, sentient energy beings, and rumors of the world ending, it’s up to Dorothy to unravel the mystery of the recent earthquakes and find Rusty, who may or may not have something to do with them. Needless to say, Image & Form nailed its theme and aesthetic a long time ago, but they still manage to bring a fresh breath to the game. Everything looks sharper, brighter and better than ever, and I was already rather fond of the way the first game looked.

The first thing I noticed about the graphics, movement, and effects was how smooth they all are now. Everything seems the same but definitely has gotten a new coat of paint. The terrains are a heck of a lot more varied and Steamworld Dig 2 feels less about spelunking to the end of the earth, and more about being a cohesive adventure game with dungeons, puzzles, and more secrets than you can shake a stick at. 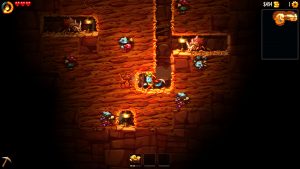 Everything does start off with a familiar tone of a mine, a pick-ax, and a flickering light. Fast forward twelve hours later and you’re knee deep in an Indiana Jones lava temple or dodging insane Vectron bots, which genuinely scared the freaking bejeezus out of me. I felt that Steamworld Dig 2 has a better flow of story mixed with adventure than its predecessor, where progress was about just going deeper and deeper. In the middle of the game you completely break off from what you are doing and go to a whole new area. I loved that.

If you’ve played Steamworld Dig or Steamworld Heist, then you know they that have a great ability to make very awesome looking characters. This is true here with this game as well. You meet a whole new cast of townspeople with their own unique personalities and thoughts. Character design is top notch and you even get the chance to interact with some of the Shiners who were all insane in the last game.

Dorothy is a different bot from Rusty and brings her own bag of new tricks and challenges.

Steamworld Dig 2 is a metroidvania style game, same as the first. You will constantly be upgrading Dorothy as she unlocks better pickaxes, better lanterns, and new tech, like sticky bombs. Aside from a whole new set of gear to unlock there are also cog mods. This is where customization is kicked into high gear. As you progressively unlock better versions of equipment, you also unlock passive upgrades that can drastically change how that equipment works. 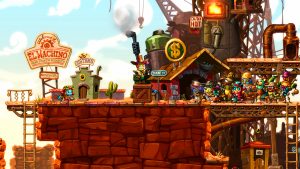 Each passive requires cogs that can be found throughout the game hidden in certain areas. You will also eventually unlock a merchant who sells them. You can equip and unequip these cog mods as you see fit to match your play style or situation. This is an awesome system and gives you motivation to explore every nook and cranny. While it isn’t impossible to make progress without the cog mods, certain passives are very, very helpful. Being able to hold two gems instead of one per inventory slot, for example, or the bounty hunter passive which gives you cash for killing things with your pick-ax. Some of the cog mod upgrades can only be unlocked by finding relics.

Relics are another obsessive and fun collect-a-thon item found throughout the game. As you adventure through mines, caves, and god knows what else, you may stumble upon a relic such as a moonshine six-pack, a rubber ducky or a Doom Cult to do list. While none of these items have a direct effect on the game, if you find enough, a certain Steambot in town rewards you with cog mod upgrades for finding more and more. 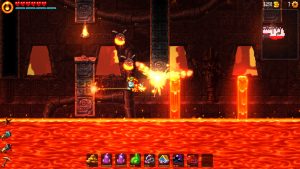 Platforming, just like everything else in this game evolves rather quickly. Dorothy starts off with the familiar jumping, wall bouncing and dashing. However, things begin to evolve when you get your hands on your hookshot and other crazy upgrades. You may find yourself in a situation where there is no floor at all. Steamworld Dig 2 definitely ups the ante when it comes to the platforming challenges. Improvements aside though, none of them were super difficult. Steamworld Dig 2 wants you to enjoy yourself more than you grind your teeth.

Combat is probably the area that more or less is kinda the same from the first game. There are plenty of new bot baddies to smash and they all look great. It doesn’t change the fact that combat feels simplistic at best. You have a couple new tricks to destroy enemies but they are mostly a hindrance and are there to annoy you rather than actually put up a fight. Bosses are another story, as some of  them can be rather tricky, but again not too terribly difficult. If you do focus on the combat you are rewarded by leveling up and gaining better sales bonuses per level. Also certain upgrades require you to be a certain level as well. 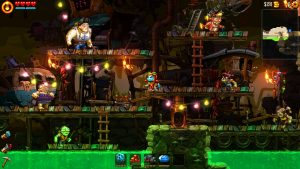 I can’t forget to mention that Steamworld Dig 2 is BEST played with a controller. The game starts up with a big image telling you as much. You can play this with the keyboard/mouse, but it really feels clunky. It’s far smoother with a controller.

In all, the gameplay is as enjoyable as the first, if not better. The “challenge” caves are fun little puzzles that never got tiring. The varied environments always kept things fresh and kept themes from over staying their welcome. Plus I never got tired of hookshotting my way around everything. If you liked the first then you will love Steamworld Dig 2.

Musically, Steamworld Dig 2 is a western; expect that type music. It’s a little exaggerated of course but it’s all very fun and cheeky. There were times that I felt the track in the first mine became a bit overwhelming. I had to lower my speakers when it came to that area, but the rest of the game delivers perfectly. There was one area that particularly that terrified me with its tone and sounds. You will know it when you get there. 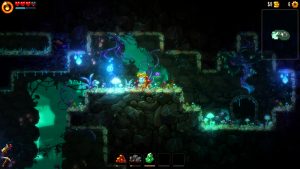 Replay value is one area that is going to be weak, but that is inherent with the genre. This is a one and done type of game but there are plenty of secrets to discover just about everywhere. On the flip side, you will get plenty of bang for your buck with this game. I still haven’t discovered everything and have played close to twelve hours. Those twelve hours were fantastic and I can’t wait to hundred percent this game.

Is the doomsday upon us? Will Dorothy save the world?

If you’ve played Steamworld Heist then you know things aren’t probably going to end well. The developer has done a fine job of crafting a pretty fun and interesting universe with a well written history. I really can’t wait to explore more in the Steamworld universe and I hope this isn’t the last we have seen of crazy steambot adventures.

Steamworld Dig 2 refines itself perfectly. I honestly doubt they could top themselves after this game. I obviously highly recommend this game to just about anyone. Especially fans of the original game. There is no doubt that the developer poured some of their heart and soul into this game. Like I said at the beginning, there are games that are just hard to put down and Steamworld Dig 2 is one of them.