The simplest way to describe Mechanic Panic is that it’s the multiplayer, and meal assembly, of Overcooked but with robots, and in a car mechanic’s garage. 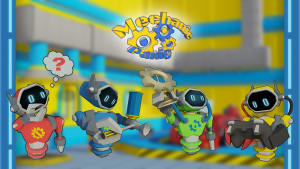 We nearly missed Mechanic Panic‘s booth at EGX 17, the cooperative game was sharing a single screen-space with another four-player title and the billboards were horizontally split with Mechanic Panic on the lower half. Tough gig, but I’m glad we found it.

Mechanic Panic was born from a game jam; specifically, from one held during Brains Eden 2017 which took place back in July of this year and had a theme of ‘Give and Take’. After the event there was a team reshuffle, and what was being presented at EGX was the result of about two months work.

With that in mind, the build on show was, understandably, an early one. A lot of the game’s artwork was in place, and the one style of play that the developers had ready was playable, albeit with less vehicle options and variety than the final game will have. That mode was, simply a quick round of the game in one of two decent sized garages.

Despite the short development time the game currently plays really well, each player (of up to four) has their own coloured robot which ambles around the single-screen garage; a button press grabs, drops, or applies, the various items when the character is close enough, and play continues until a timer has ticked down. 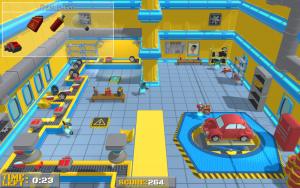 The items, components of a car, can be found in a variety of places around the workshops; paint, oil, and the like are static objects; while the vehicle body parts and trim spawn in on conveyor belts at random.

There’s no set order to getting the parts together, which means that as the list dwindles down players are more likely to bump into each other as they rush for components, so the tension naturally increases. Especially as all the players are working on a single vehicle. This natural tension is excellent, and is one of the more stand-out ingredients the game captures from Overcook’s recipe for success.

As the current build is basically up to four people rushing to complete one vehicle at a time as to come first on a leader-board, the game doesn’t currently have much in the way of replayability.

That said, the ultimate plan for the game is to have a story mode in the game, which at the minute is set to follow the game’s four robots as they break free from their master, but then go back into car assembly and repair anyway. While the story isn’t set in stone, the features which come into play as you progress are; success in the levels will give you means to unlock extra bits and pieces for your garage, which you’ll be able to alter and upgrade as you progress through the story. The story mode will introduce new locations, like Area 51, and new vehicles and NPCs to boot. 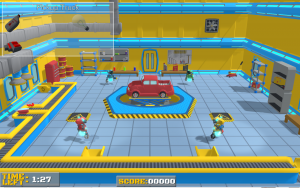 There was, perhaps most interestingly, talk of potentially looking into AI for the non-controlled robots; an interesting idea which would work around having to balance the game for smaller groups, or have to leave the game with a tough difficulty curve which blocks perfect clearance with smaller groups as the requirements transcend the plausible.

All of that said, hopefully we will see a mode added where each person — or team — has their own vehicle to build, yet the components are scarce. A situation where there are only a couple of belts which each cross over multiple player’s domains, all while the static components (paint, for instance) are kept in short supply by requiring players to perform a variety of actions. E.G. Use computer, use button to open shutter, wait for driver to replenish all paint modules, acquire paint.

I was, ultimately, impressed with what I played and what the team had to say about their plans. Needless to say we’ll be keeping an eye out for updates on Mechanic Panic in the hope that it will become a truly remarkable co-operative title.

Secret Government allows you to rule the world from the shadows

Carrion is a short, visceral metroidvania that turns the tables