Picking a place to start when trying to review Stardew Valley is nigh impossible. An open ended, brilliantly made, sweet and charming game like this only comes around once in a blue moon so excuse me while I try to sell the game to you as hard as I can. Imagine Terraria mixed with Harvest Moon with a healthy dose of Minecraft and you get Stardew Valley.

When playing, you can’t help but make Harvest Moon comparisons. Your main goal in the game is to plant and grow crops, sell them on and make yourself a tidy profit. That’s the basic idea, but of course you over an overarching story as well as a bunch of different side quests, yet the main goal is always remains the same. Build your farm, and grow some crops.

You play as a disgruntled employee of mega corporation of Jojo Mart, who decides they’re sick and tired of their current, mind numbing life. You open a letter given to you on the day of your grandfather’s death, and find a deed to a small farm in Stardew Valley that your grandfather used to own. Quite rightly, you quit your job and pack your bags immediately.

In the game, you’ll find yourself with barrel loads of things to do which means you’ll have to use your days productively. Things to do include, clearing out your farm area, going fishing, going farming, tending to your animals, going mining and finding that special someone to settle down with. Each action you do will drain your energy meter meaning you can’t do everything in a day, so you need to choose carefully.Your TV will soon become your greatest ally, detailing the weather for the next day, giving you special recipes to cook, and even telling you how lucky you’re going to be that day, meaning you’ll be able to plan your days accordingly.

You’d think that that would be plenty of things to do, but you can also do a number of other things as the seasons go on. Every couple of weeks there will usually be some kind of festival to attend which will offer you a small minigame, each just as fun as the last. People in the town will also need loads of favours doing as well in return for rewards. There is quite literally tonnes of things to do, so much so, that I’m still worried I’ve missed something even after over ten hours of play time.

The community in Stardew Valley is one of the best things about it. There is a myriad of different characters that you can interact with, each with their own unique personalities and quirks. Every month, a number of different people around the village will have their birthday. If you like that particular individual, you can give them a gift, but be warned that the wrong gift could mean disastrous results. Befriend people enough and it opens unique dialogue options specific to you and that character. If it’s one of the handful of people that you can romance, marriage is also an option later down the line. 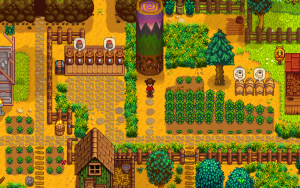 Farming can also be a challenge in itself. There will be certain things you’ll need to look out for if you want a bountiful harvest. Plants will need watering every day and you’ll need to craft some scarecrows if you want to keep the pesky crows from stealing your crops. The biggest factor that you need to take into consideration is the seasons. Certain plants will only grow in the right temperature and environments meaning that trying to grow something that only grows in the summer on the last day of summer would be a bad move. You’ll need to prepare in advance to be bringing in money all year round.

I only have a couple of problems with Stardew Valley and none of it really detracts from the overall experience. Instead of helping you along with carefully laid out tutorials, the game expects you to know what you’re doing from the offset, dumping you into a farm with nothing but a selection tools and a handful of seeds. There are tasks that are set out as tutorials, but the game is so vast and overwhelming, is can de easy to get bogged down in it’s sheer enormity. Once you’re past the steep learning curve however, Stardew Valley is an incredibly enjoyable, and very addictive, experience.

Another small gripe of mine was the map, and also trying to find the locations of people. If you have an idea of who you would like to marry in the game, you’ll want to talk to them every day and give them the odd gift here and there, but the movements of the townsfolk are so random and frequent, people can be difficult to track down. They’ll be in different locations every season, when it rains, when it’s daytime or night time, and even when there’s a festival on. Tracking down one specific person can be nightmare, especially when you have to find them to complete a quest. 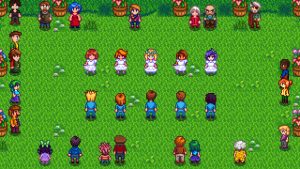 Even though it has been designed with that retro art style so many developers have adopted with their games recently, it still looks fantastic, with each location and environment dripping with detail that has been lovingly crafted into every sinew in the game. Each season has it’s own unique style and layouts, every one looking more fantastic than the last. If found myself excited as each season passed, wondering what the land would look like, from the swaying trees of spring, to the icy roads of winter. Along with some stunning scenery, Stardew Valley can also boast an original soundtrack, with some bumping, catchy tunes as well a variety of different sound effects which makes the world around you seem much more alive.

Stardew Valley is incredibly fun to play and get lost in, with a different variety of challenges to overcome. Festivals are something to look forward to, but also shake up the gameplay when the game threatens to become stale. Not only that, mining is also a very fun aspect of the game. You can delve deeper and deeper into the mine, encountering more and more monsters on your way down as multiple as better and better loot. Your energy bar can limit your time mucking around the game’s massive world, but it hardly affects the game and actually keeps you grounded.

Games like Stardew Valley  are incredibly addictive and the developer has nailed that “one more day” approach that other games have such as the Civilization series and the lesser known This War of Mine. Every new day will throw something new at you, whether it be some crops to harvest, another birthday to celebrate, or a new animal to take care of. Couple with the fact that Stardew Valley is pretty much infinitely replayable with multiple different locations to set up your farm, a totally customizable farmyard and character. and loads of different people to interact and even marry, I have a feeling that Stardew Valley will be on our computer screens for a few years to come, and will be remembered with fond memories.

Now if you’ll excuse me, I have some strawberries that need picking.

Stardew Valley: The Board Game is a great adaptation of the video game