Redout. Noun – a condition experienced by pilots and astronauts in which blood is forced to the head and results in a reddening of the field of vision during rapid deceleration or in maneuvers that produce a negative gravity force.

When you read the definition of the word, you automatically assume that Redout is going to be some sort of fast-paced, adrenaline filled speed-fest… You assume correctly! Redout is precisely all of those things, and more. It’s a futuristic racing game by 34BigThings, built on the incredible Unreal Engine 4, wherein you pilot a kind of hovering speedster around some totally crazy tracks. It’s in a similar kind of vein as Wipeout was, only 20 years newer, faster, and much, much prettier! 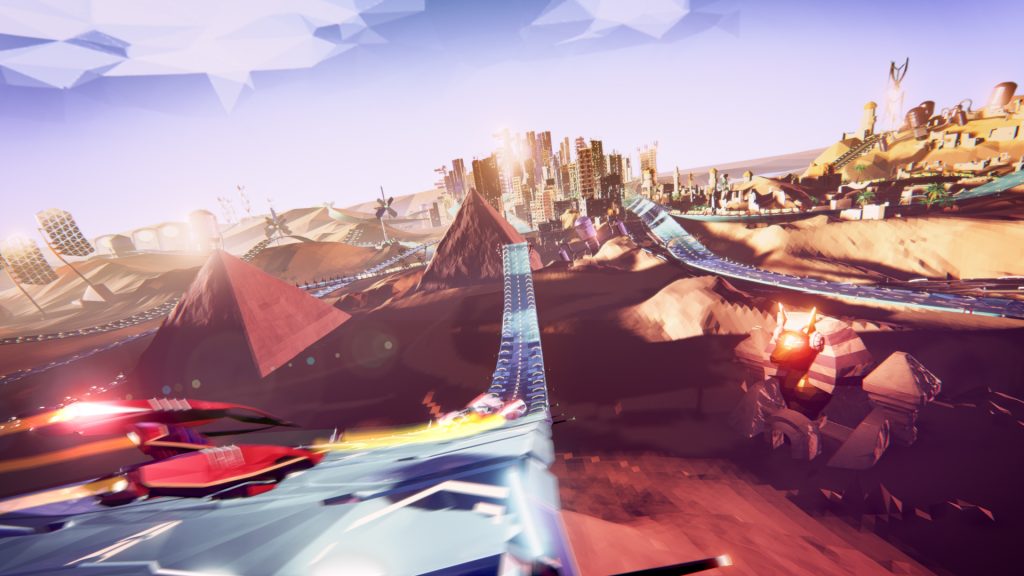 The game offers you Career, Quick Play or Online modes – the latter two options allow you to race on tracks that you have acquired through the former, using the ships that you have unlocked. The Quick Play works as a kind of practise mode, allowing you to specify the parameters of the race that you want to try out. There are a multitude of different modes to try out, including classics such as “Race” (duh!), “Time Attack” and “Survival”, but also some more interesting options like “Instagib”, “Boss” and “Last Man Standing”.

Career mode is where the bulk of your time will be spent. Redout allows you to select from a range of starter ships (you get your first one for free), each with different attributes. I opted for the one that had the best speed and acceleration, but in hindsight I should have picked one that was a bit tougher as I spent most of my time being blown apart after hitting too many walls! Anyway, you choose your ship, pick a track/race mode (to start there is 1 track that you can race on or do a time attack), and hit go.

And that’s it – you’re racing! There’s no tutorial, but the controls are simple enough to pick up… accelerate, brake, boost, that sort of thing. You can also change the viewpoint, which I almost immediately do to drop into the cockpit view – I don’t like racing 3rd person. The ship takes a bit of getting used to, the course too for that matter. I guarantee you will be bouncing off a lot of walls to start off with, but give it time and you’ll be bouncing off them a little less!

I think it’s the combination of the incredible speed of your ship, the twistiness of the course, and the narrowness of the track that means you, initially, feel like you have little to no control over which way you’re going. It’s a steep learning curve, even in the starter ships, and quite unforgiving. Your ship has a health bar, which drops when you hit things and recharges slowly when you don’t. Hit too many things, like the walls, and your ship explodes – shortly to respawn on the track. In my first hour or so of playing this happened a lot. But after a while, and a few ship upgrades, you slowly start to realise that you can actually control the direction of your ship, and when you scrape the walls it’s more manageable.

It’s at this stage that Redout becomes enjoyable. You stop cursing at the stupid loop-the-loops, corkscrews and jumps, and start appreciating them for what they are – very pretty and very fun to race on. You also start to relax and enjoy the way that the game looks, because despite staring at it for the previous X hours, not blinking (you don’t blink in this game!), you haven’t actually seen any of it yet! It’s very pretty. The levels are wonderfully produced and have some great details specific to their location. For example to start with you race in “Cairo”, and the levels are desert-like and have dust storms that cross the track. Later on you move to “Alaska”, and the world is all blues and purples and icy and smooth.

I feel the need…. The need for speed!

At the end of each race you are awarded money, experience and medals depending on your final position (usually last in my case). As you acquire experience levels you unlock additional features such as ship upgrades, power ups, new ships and levels.

Ships can be upgraded in 4 areas, Turbine (power), Magnets (grip), Structure (health), and Energy (boost). Each area can be upgraded once per ship, which is a little disappointing as I quite like being able to customise my racing vehicle and set it up how I like to race (like in Gran Turismo), but seeing as this is definitely more of an arcade-style game I can understand why the decision has been made to do it in this way. You can also change the colour scheme of your vessel, again though from a pre-defined option list.

Power ups become available at level 3 and allow you to equip 1 passive and 1 active option. These cost money to unlock, but become available for all of your ships. They are also upgradeable. I went for the improved hull structure (as I kept dying – not sure I mentioned that yet), which helped immensely! I also ended up buying the slower but more robust starter ship, which improved my durability on one hand, but couldn’t match the lap times of my quicker vessel, so I swapped back.

And this is where Redout gets you. By this point I had bought 2 ships, fully upgraded one of them and partially upgraded the second. Equipped power ups (and upgraded those). And yet I still was unable to get bronze on the very first level! And as for racing against the AI – 5th out of 6 is my current best position. There is the constant strive for perfection (or adequacy in my case!), you know that you can do better – and you will do better if it kills you, dammit!

There are a few things that could be improved upon, in my humble opinion. It would be nice if there were an option to race against your best lap as a shadow. It’s hard to describe, but it’s in a lot of racing games and made noticeable in its absence here. Also, there is no replay mode that allows you to watch your last race from a 3rd person, artfully shot kind of way. This is a real shame considering how totally beautiful the game is, and how little you can appreciate that when you’re actually engrossed in the race. I think that Gran Turismo did this best when it first introduced it – I’m sure it wouldn’t be hard for the developers to add.

And while I’m picking nits, it would be nice to have more music variety. Don’t get me wrong, I think that the futuristic techno/dance style tracks have been very well produced and fit the game perfectly, especially the menu music, it’s just that I would prefer to be able to change to more of a rock/metal style when racing… but maybe that’s just me…

All that being said, Redout is a very good game. It’s incredibly slick and polished, with lots of options, achievements, game modes, upgrades – basically every reason to replay it again and again, which you will do – especially if you are even slightly competitive! Which I am.