Games that reach the standard of Pillars of Eternity come around very rarely, and those with the depth, longevity and lasting challenge that Obsidian’s crowd-funded 2015 PC classic almost never make it onto consoles.

You see, Pillars of Eternity is a highly tactical, incredibly beardy, incredibly wordy party-based RPG that has +2 to plot and is like almost nothing else console players currently have access to. The notable exception, of course, is 2016’s similarly exceptional Torment: Tides of Numenara, so if you’re in the market for a deep and meaningful RPG experience, which horse do you back?

Actually, assuming you have literally hundreds of hours to spare, then you should back both. Torment is a superb game that I absolutely love, but I like Pillars more. Where Torment features a beautifully scripted, incredibly rich vision of the future that is as unique and timeless as Blade Runner, Pillars has the characterisation of Game of Thrones, a world as vast and detailed as Middle Earth (almost) and a script as that in any movie or game that I’ve ever seen. 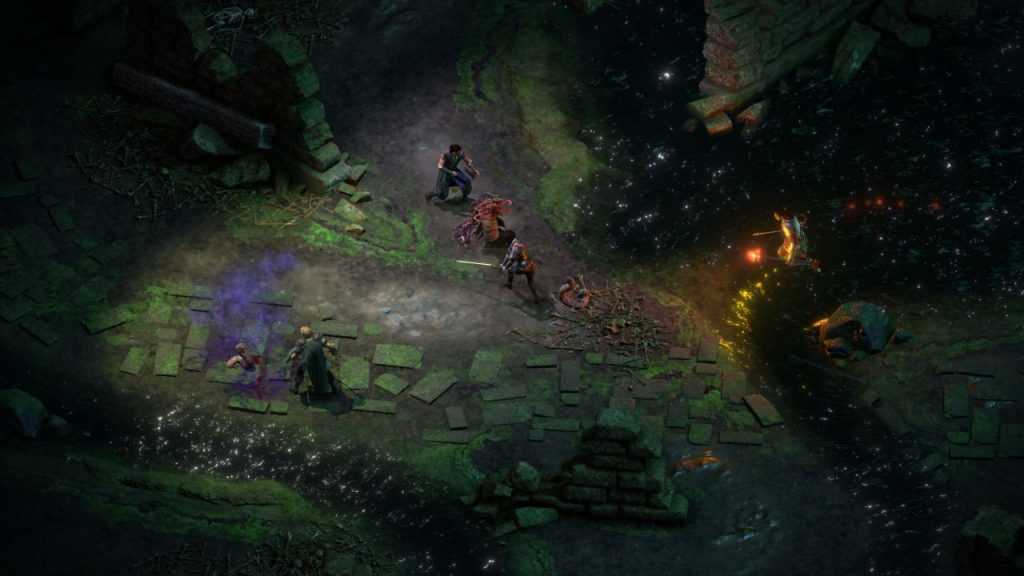 Pillars opens like so many other RPG’s of this kind, with the player character arriving as a stranger to the Dyrwood, where much of the early scenes take place. It came as a surprise to me that no one was amnesiac if I’m honest, but the whole idea of being a stranger in a foreign land had the same effect, as backstory quickly becomes irrelevant, and is rarely touched upon. Instead, within about an hour of the game beginning, the player learns that he is a Watcher, a rare kind of person that can witness the memories of both his own past lives and those of others, via their lingering souls.

Whilst from a video game plot writers perspective, this is an absolute boon, it is apparently quite inconvenient for those stuck with the skill. Apparently, watching the memories of long dead souls causes long term damage and typically, Watchers go insane, having lived a thousand lives and seen more than a few of them end abruptly. Learning this, the player sets out on a quest to remove the curse, or at least to understand it, and perhaps minimise the damage to whatever extent possible. 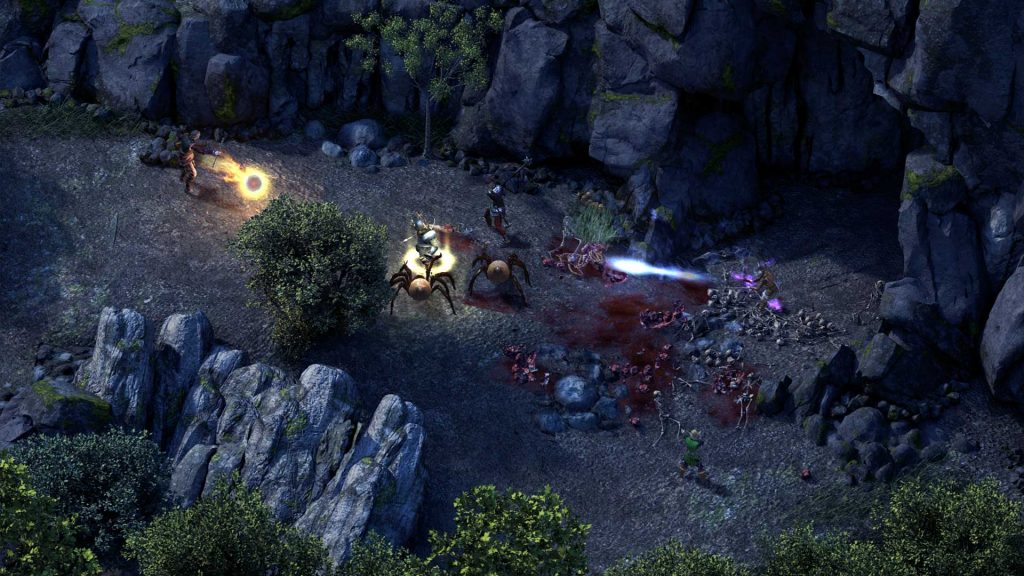 Pillars is a tactical RPG however, so obviously, nothing is as simple as that. The ability to watch souls becomes a core mechanic for all manner of side quests, and as the plot unfolds, the player gains access to more and more companions – eleven that I know of – each of whom has an interest in The Watcher for one reason or another. Aside from the core plot and the many, many, many side quests that it offers, Pillars also has a lengthy and interesting side quest for each companion, and I must say, they are good. I mean really good.

The success of these stories is born from how strong each character is. Take Kana Rua for example, who is one of the Amauau people. Kana enlists the player to help search for a sacred text, which he hopes will expand his knowledge of the common link between all people, and to prove a point to one of his fellow students. Another is Sagani, a hunter and mother, who has set out on a quest to locate and communicate with the soul of a famous elder that she believes has wandered far from the homeland of her tribe. 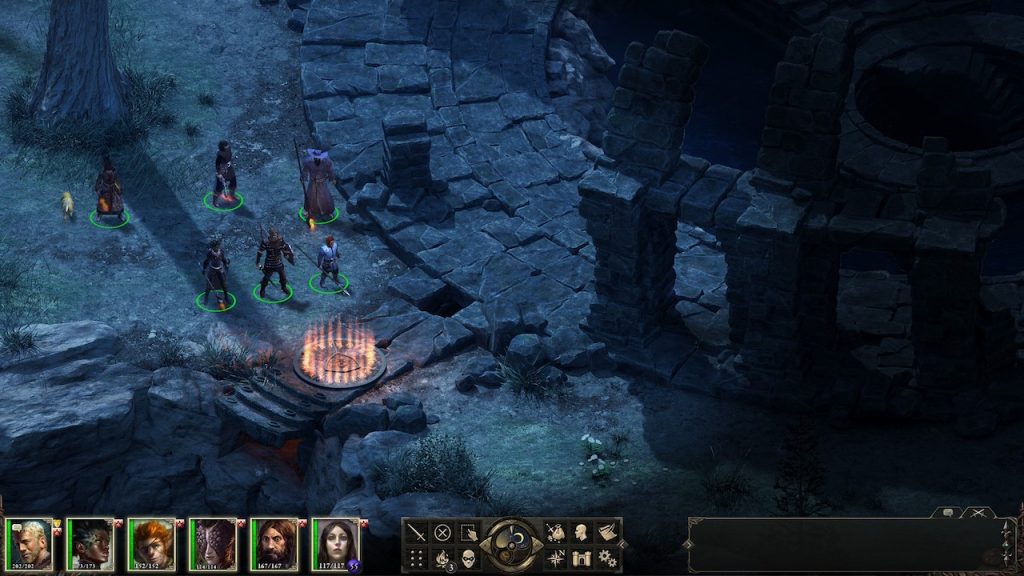 The more you know these characters, the more you’ll grow to like them, and the more you’ll want to see their quests through to the end. Each one is exceptionally well scripted, and each quest is just as engaging as the last. The same can be said for almost every aspect of Pillars quest makeup, and the player soon has a journal that is fit to bursting with quest after quest, very few of which are simple seek and destroy missions or fetch quests. One interesting nod back to the classic games of the genre is the lack of an objective marker, leaving players to read the journal, study the map and – shock horror – explore the game world themselves.

I never found this to be a problem however, and whilst I did occasionally find my way into places that I shouldn’t have been (because I got killed) or I accidentally advanced the wrong quest line, I never broke the game. In fact, I did once discover a kind of reverse way of completing a quest which I found quite ingenious, and it made me feel like I had accomplished something exceptional. Whilst this kind of thing is fairly normal in open world games, it’s impressive to see that a game as tightly scripted as Pillars can also get away with this kind of tinkering. 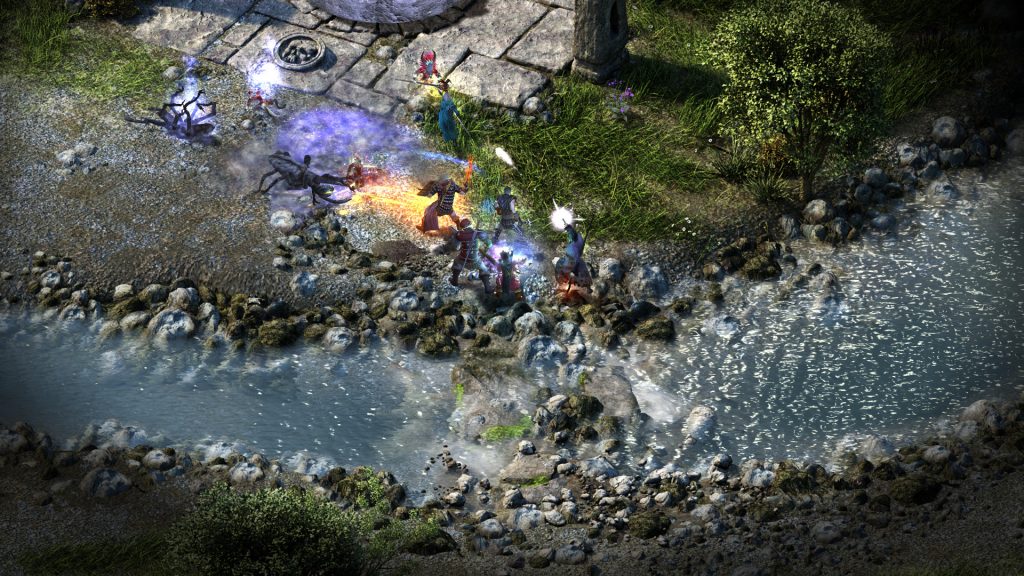 Played from an isometric angle that can’t be rotated, Pillars also features a surprisingly attractive game world that is as detailed in appearance as the script is in descriptive flair. From the dilapidated buildings that line the opening village of Gilded Vale, to the crisp, white beauty of The White Marches, Pillars benefits from visual storytelling that is perfectly in sync with the rest of the game. The console version performs well too, with only very, very occasional stutters in frame rate during the most intense of battles.

There are some slight issues however, which largely relate to the control interface, having made the switch from mouse and keyboard to control pad. When exploring environments (between battles) interaction with the environment becomes context sensitive, with interesting objects becoming highlighted when you move near them. Unfortunately, this is very hit and miss, and I found myself having to walk backwards and forwards towards the same point of interest, as the icon to select it flickered on and off the screen as if I were stuck in some kind of twisted QTE sequence. 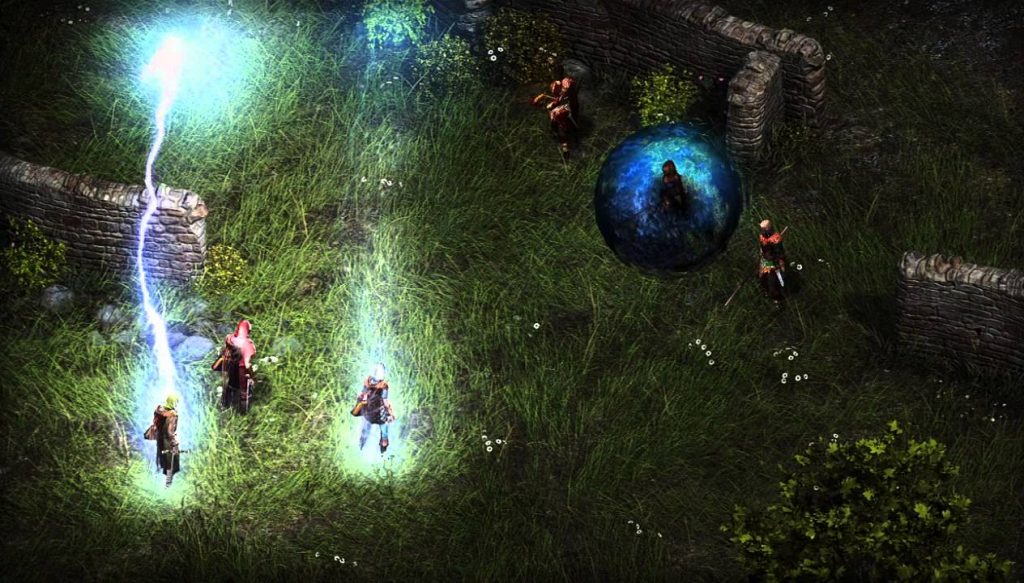 Another challenging feature of Pillars is that combat can be quite tough, but the player isn’t helped by the interface and camera angle. Whilst this never spoiled the experience for me, in larger battles, it can become quite hard to manage the on-screen action. This is because combat in Pillars is fast paced (although there is a slow motion button,) and you’ll commonly need to use the pause button to assign orders. The player party can feature up to six playable characters plus any summoned creatures or animal companions, so it can commonly include ten or so characters to order around. When facing a similar number of enemies, this can result in quite a bit of visual chaos, especially when walls and other bits of scenery (even considering transparency) are factored in.

Aside from this minor quibble, combat in Pillars is incredibly satisfying. As characters level up, their skill sets increase to add more spells, chants, powers and abilities, and each of these can be accessed via a specific radial menu, which includes several quick use slots. Players can also equip multiple weapon sets to enable rapid changes in the battle, for example by moving a ranged character into a melee role if the situation dictates it. The battle system is linked very closely to the character development features, and between the two there is unlimited opportunity to specialise characters and focus them on specific areas. AI scripts can also be programmed, so you can create offensive spellcasters, healers and whatever else you fancy really. 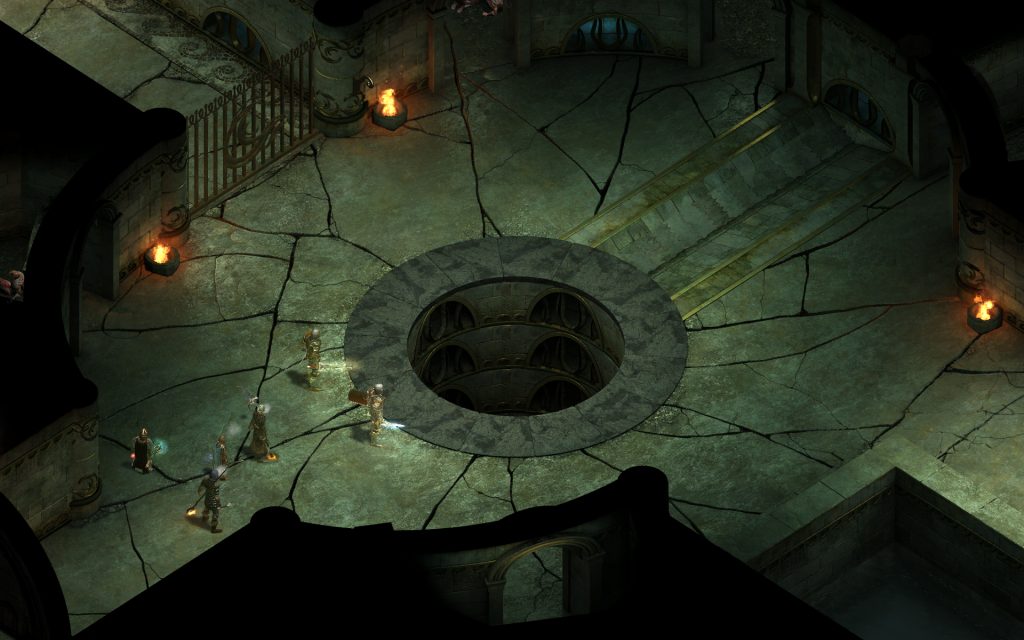 I could probably wax lyrical about Pillars all day long, but I will have to stop somewhere. There are still features that I haven’t discussed, such as the player stronghold that players can upgrade and defend, or the inclusion of enchanting items. I could talk about how diverse the characters are – from Rangers, Fighters and Assassins with their fairly obvious talents, through to Chanters and Animancers, which are less obvious. These things are all tiny, tiny details however – mere hints of spice in the rich, delicious melting pot that is Pillars of Eternity.

To conclude, Pillars is one of my favourite games of the current console generation, and much as Torment: Tides of Numenara was my game of the year in 2016, Pillars might hold that honour for 2017, were it not for Nintendo’s Zelda: Breath of the Wild. Any console gamer that values strong storytelling, engaging and likeable characters and solid party based combat should check out Pillars without hesitation. Similarly, if you’ve ever lamented the decline of classic RPG’s in a world ever more concerned with 4K and 60 frames per second, then there has never been a better chance to make amends and dive into something completely different.