In perhaps the most sobering intro I’ll ever write, I’m here to tell you all about spoilers. Or the lack of spoilers. Yes, this is a review in which there will be no spoilers whatsoever (in my opinion), but I do want to warn you about the things that you might see and read in this review. Before I played my first game of Pandemic Legacy: Season One, I took pictures of the box and its contents as you will find them when you first open it and as such, I don’t think anything is particularly sensitive. You’ll also see some images of the most basic setup possible, which represents a vanilla game of Pandemic when you set it up for the first time. Only one of the permanent stickers has been placed, which is one you’ll encounter within moments of opening the box.

Anyone who has played Pandemic will already know what the basic formula is. Up to four players choose roles such as Medic, Researcher and Dispatcher and use their individual talents to rid the world of four deadly diseases that threaten the very existence of mankind. The game is played on a simplified map of the world, with cubes used to represent the spread of each disease in key cities around the globe and cards that the players draw potentially causing terrifying outbreaks that can destabilise regions and make them more challenging to reach. 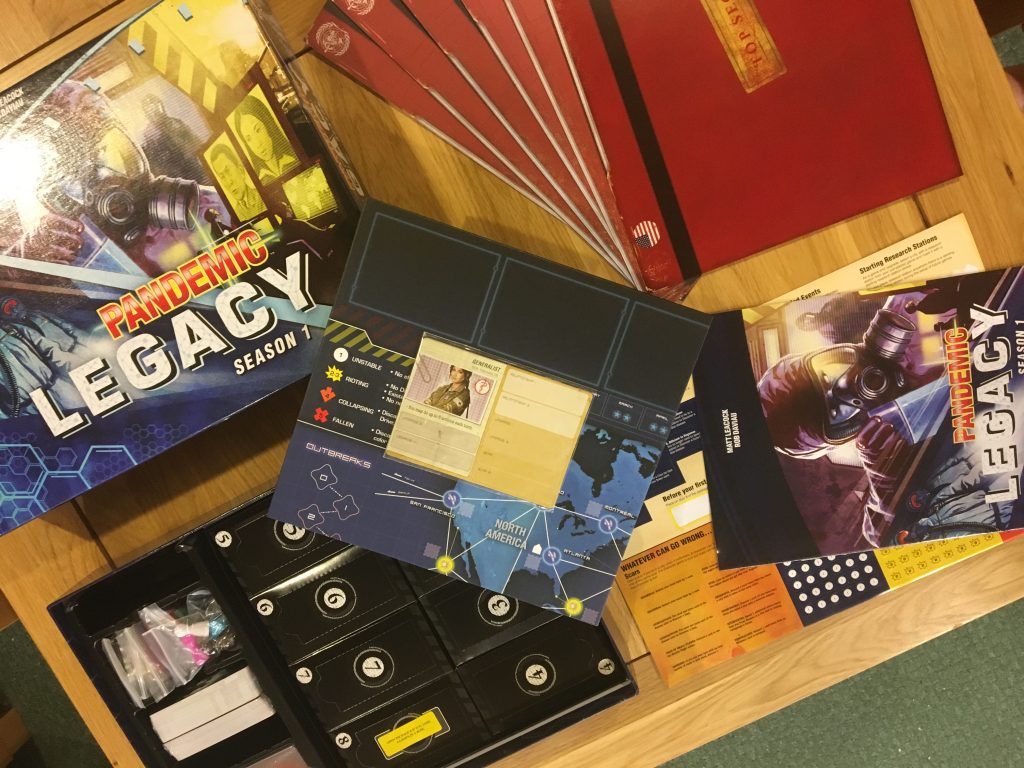 Pandemic Legacy provides not only the same central experience, but also a raft of enduring features that unfold in the form of stickers, cards and other components that are revealed over the course of an in-game year separated into months. This is where the spoilers come in really, because although I am exactly halfway through the year at the time of writing, I can’t actually tell you much about what is in the “Top Secret” dossiers and in the numbered black boxes that you can see in the picture above. What I am going to do is talk a lot about how playing Pandemic Legacy makes me and my group feel in general and how it dramatically ups the ante in comparison to the already exceptional base game.

First of all, Legacy starts out slightly easier, with January offering a challenge similar to the “easiest” mode of the base game, with the added benefit of tweaks to the map that speed up travel to traditionally hard to reach places. Pandemic Legacy does not offer the opportunity to vary the difficulty of the game by adding extra outbreak cards in the same way as the base game does, but that’s only because each progressive month (typically) offers increasingly challenging rules variations. Veterans of the base game are unlikely to struggle for at least the first few months, but new players will appreciate the opportunity to learn the ropes before things get too heated. 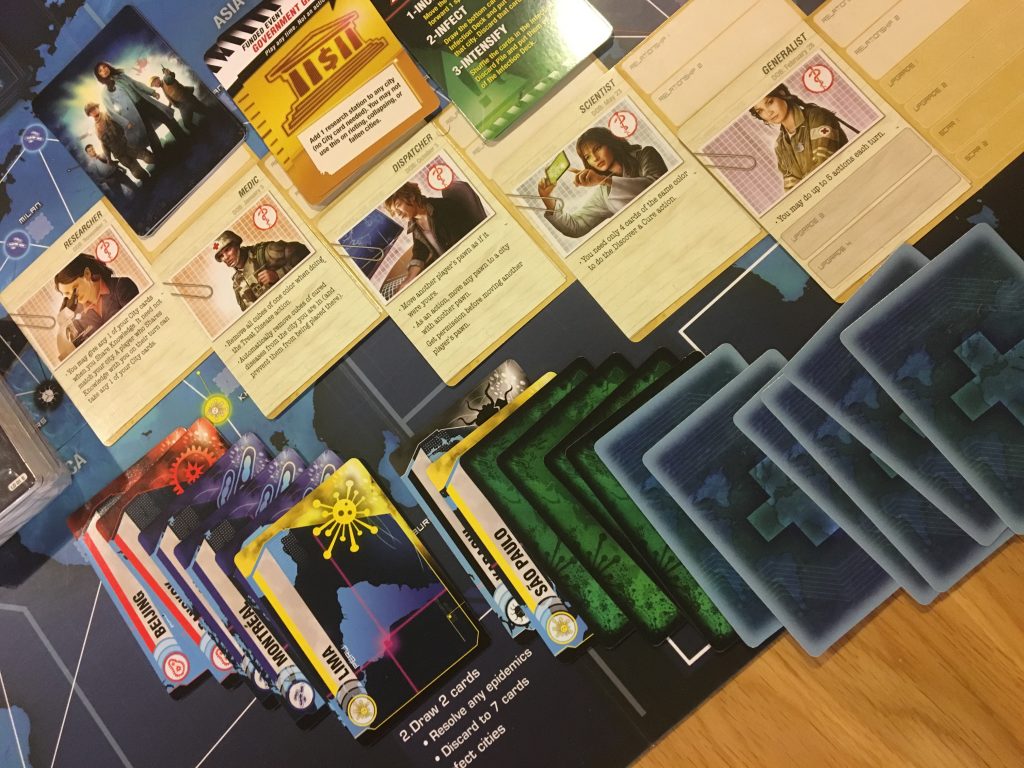 As with all the best board games, the magic of Pandemic (and indeed Pandemic Legacy) is the simplicity of play. Each game turn consists of players taking four actions from a list that includes moving between cities by land, sea or air (with travel to non-adjacent cities requiring a card to be spent), reducing the spread of a disease (one cube per action, unless a cure has been found), building a structure such as a research station, trading cards or curing a disease by spending five cards of the same colour. Once the player has completed their four actions, they draw two cards from the player deck (which happens to include five fairly evenly spaced outbreak cards) and then draw cards from the infection deck based on the current infection rate.

What this means is that as the game goes on, the number of disease cubes on the board will generally increase at a greater rate than players can cure them on a cube by cube basis. Instead, players must use the cards in hand and their respective character skills to first cure one or more diseases and then to eradicate the remaining cubes. This helps to bring the overall situation to a more manageable level, but as the months progress in Pandemic Legacy, things get tougher and tougher. For example, each month features one or more objectives which will enable the player to win that month, but there are also an increasing number of rules and effects that mount up against the player. 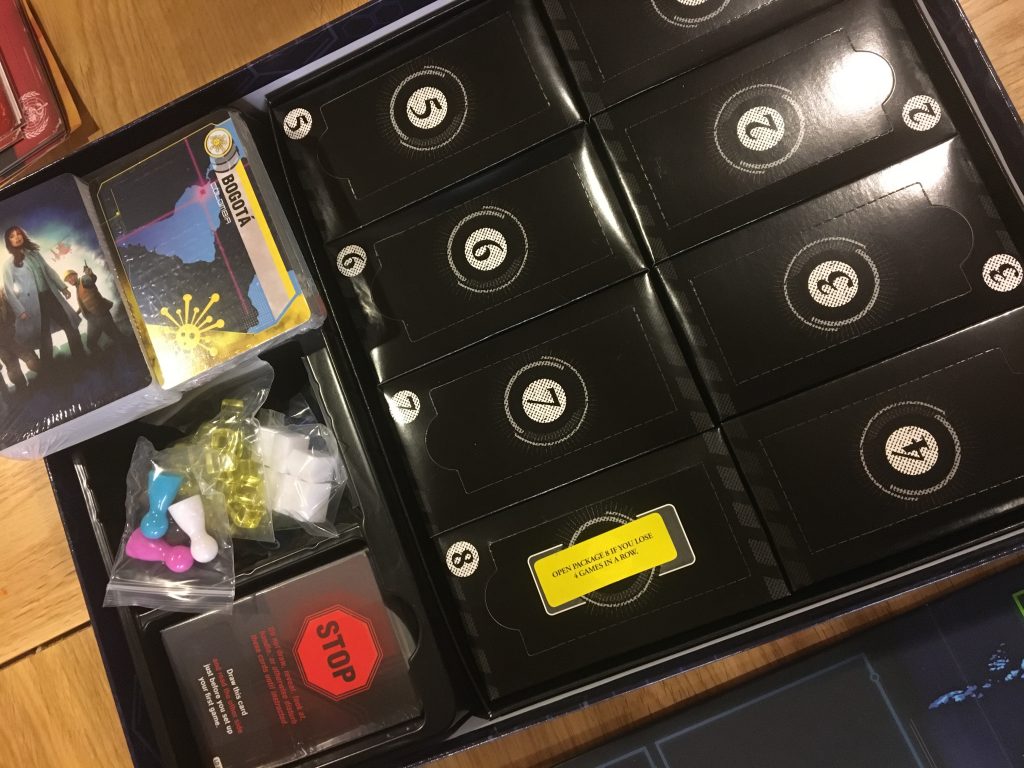 And this is where Pandemic Legacy really begins to differentiate itself from its more straightforward sibling. Take the board, for example, which can be changed permanently in any month, leaving a lasting effect for future games. As a simple example, when outbreaks occur in Pandemic Legacy, a sticker must be added to the board to show an escalating level of panic. This is harmless at first, but a second outbreak introduces rioting which prevents flights into that city. Should two more outbreaks occur, the city will fall, destroying it forever and killing any player character that is unlucky enough to be there. Yes, really.

Whilst such extreme scenarios are rare (it hasn’t happened to me yet, touch wood) there are many, many other ways in which Pandemic Legacy enhances and twists the basic experience into something much, much deeper. Take scars for example, which are negative traits gained by characters by being in a city as it suffers an outbreak (there are three outbreaks per city before the final, catastrophic one that causes it to fall) and force the players to do things differently. For example, a paranoid character can no longer share knowledge, making them just a tiny bit less useful in later games. A character with two scars is verging on becoming a liability because if they take a third scar, they are lost. 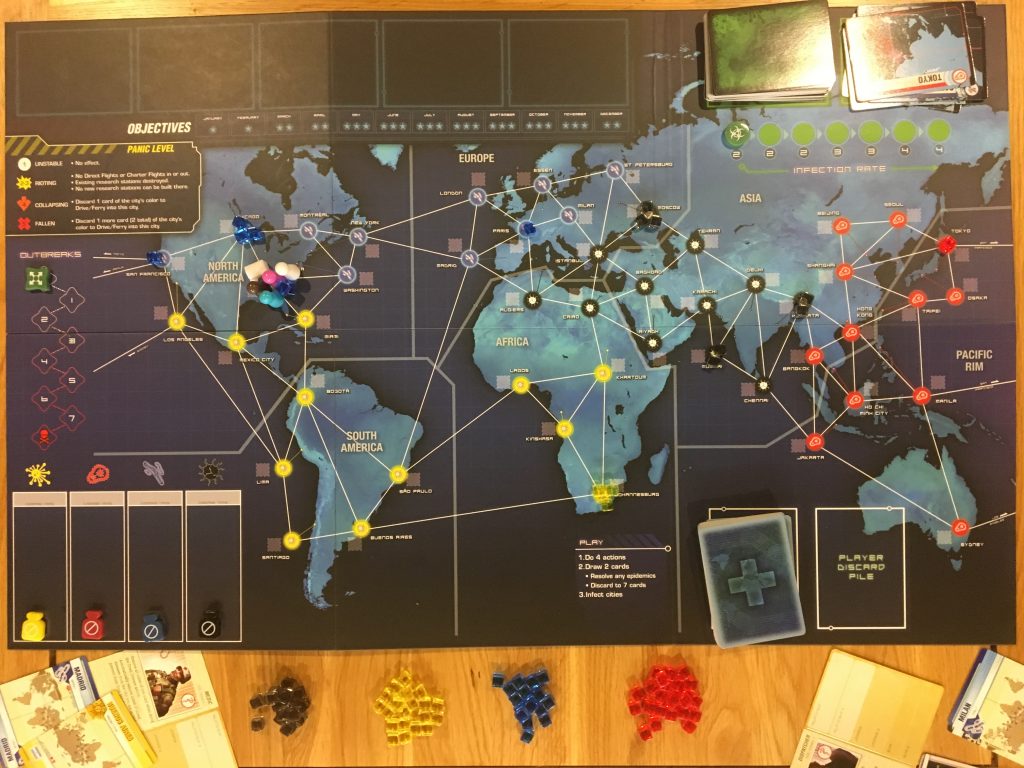 Balancing this out are various upgrades that the game includes, two of which can also be assigned to each character, alongside a couple of relationship traits. These upgrade and relationship enhancements can serve to create powerful specialist characters or expert generalists, as well as making potent combinations that can give a real edge. Ultimately, the inclusion of these positive and emotive traits is a brilliant way to counter the scars, because whilst you’ll always want to use your best team, putting them on the front line makes them considerably more likely to take scars and potentially, to be removed from the game forever. I mean, the manual actually says that you should rip their card up – it’s still not something I am entirely comfortable doing, but it certainly creates a sense of real, palpable loss.

The board and the characters are by no means the only things that change either. The rulebook has many, many slots throughout which encourage players to add stickers that introduce new rules or change existing ones. I’ve added some of these throughout my journey, but others remain ominously blank and I’m already wondering whether I’ll even see all of them by the time I play December, or whether some will remain hidden behind doors that I am never told to open. As you’ll also see from the pictures, there are eight boxes included within Pandemic Legacy, several of which contain actual components and cards that have equally radical effects on the way you play. Even the diseases can be mutated depending on how the player interacts with them. 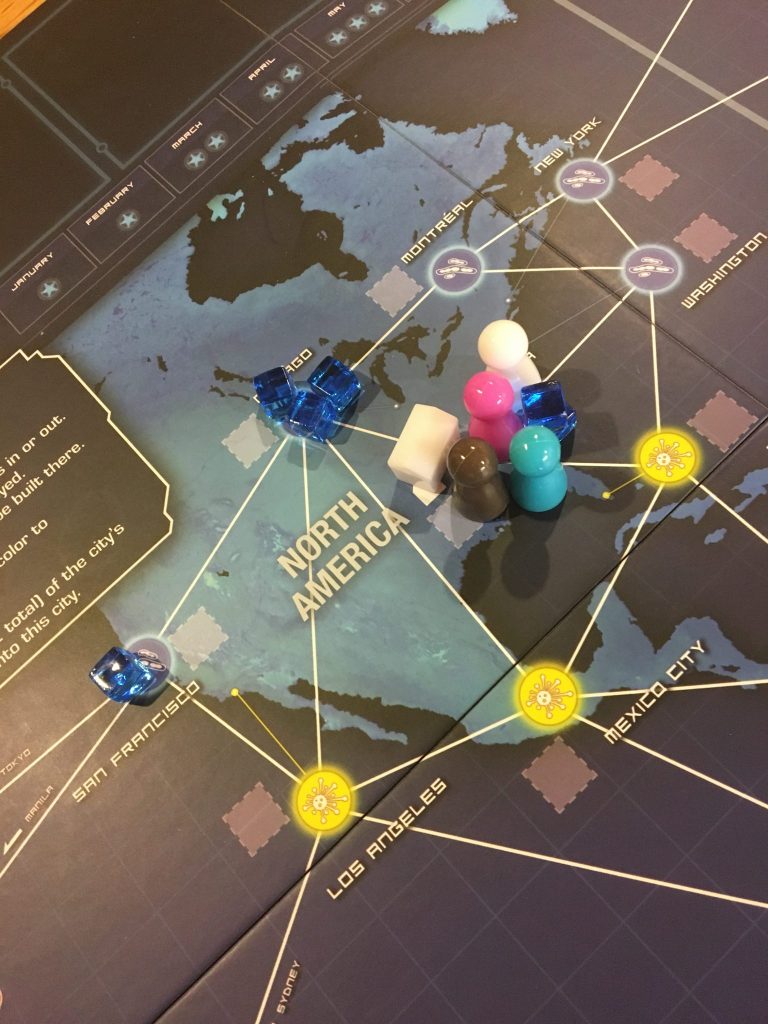 These changes, operating cumulatively within an established and exceptional structure like Pandemic result in a truly engaging experience. It’s hard to describe how my feelings changed from beginning the game with an unmarked map and characters called “Scientist” or “Researcher” to having cities on the brink of collapse, diseases named after 80’s action movie heroes and each character dripping with the history of their experiences to date.

If you’re looking for a casual way to get into legacy gaming, then I think Pandemic Legacy is most definitely the best place to start. The core game is so much more fun than the likes of Risk, yet the legacy aspect has none of the overwhelming complexity that comes with games like Gloomhaven. The basic game of Pandemic remains a better (if not the best) gateway game for non-gamers to pick up casually, but if your plan is to reel a few pals in, then why not buy Legacy and follow the instructions on Page 1 of the manual that explain how to setup a practice game? Many people called Pandemic Legacy the best game of 2016. I may be late to the party, but based on what I’ve seen so far, who am I to argue?

A copy of Pandemic Legacy: Season One was provided for review purposes and can be purchased via 365 Games or through one of the shops found in this handy Store Locator.

Review | Majesty: For the Realm