Disclaimer: At time of writing, only eight of the twelve scenarios were unlocked in the review build, and multiplayer was disabled. The below is based off experiences with those eight, and some time spent with the level editor.

The last time I visited Order of Battle was just before the developer’s changed business model, switching from a core game with expansion packs into a free-to-access core with teasers for each of the DLCs. It was a bold move that massively opened up the game to new audiences by lowering the price of entry to nil.

The big shift happened around the same time that Winter War launched; the new DLC was focused on the Soviet invasion of North and North Western Europe. The shift wasn’t just based around content structure; the developers also changed the subtitle of the game from ‘Pacific’ to ‘World War II’, as to allow for a wider focus on the overall conflict — starting with that Soviet march into Northern Europe.

Order of Battle: Pacific and its early DLCs had completely nailed the -rarely covered- Pacific Theatre, with an easy to understand supply route system (critical for the US Marines campaign) as well as core units and unit purchasing mechanics similar to the Panzer, or recently Warhammer 40k Armageddon, series. Campaigns were around a dozen, hour-long scenarios long, with repercussions from earlier, optional objectives rolling throughout the campaign and a choice-of-two between upgrades for your forces. But, enough of that; if you want to play it you can –as it’s free– or you can check our our [Order of Battle: Pacific review], [Morning Sun review], or [US Marines review].

Blitzkrieg, then, takes the game’s new remit and casts into the deep end. Where Winter War had added new terrain and around 90 units to the already expansive selection -and to the scenario creator. Blitzkrieg adds just over 200 units, covering the French, British, allied, and various conquered nations’ forces as well as an expansive selection of the German arsenal and forces from throughout the conflict. Where previous campaigns have pushed in one direction (and sometimes into retreat), Blitzkrieg currently has it’s scenarios littered over a diverse selection of locations – from Yugoslavia to Dunkirk. Where previous games had given you a choice of two upgrades for your forces, Blitzkrieg (retroactively to boot) introduces a specialisation tree. If this DLC is a show of intent for the future of the series, then the developers have a sturdy course for their lofty ambitions. 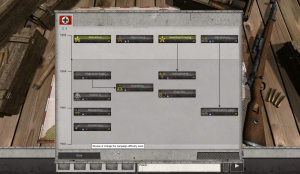 The new campaign is twelve scenarios long. Each of the eight included in the build equate to about an hour of play each, and I’m sure the final four -which cover the push through Minsk onto Moscow- will come in close based on the game’s previous campaigns. Obviously some people play slower or faster, and as you ramp up the difficulty you’ll likely need to take a lot more time making your decisions regarding moving and securing hexes en route to your objectives.

In keeping with the previous campaigns most of the scenarios contain four or more optional objectives; ranging from securing a target in a time limit, to destroying a certain amount of forces before rolling on an objective, to securing non-critical targets like Modlin Fortress, and its armoured train. As with the previous campaigns those have repercussions throughout the (or later) scenarios, sometimes reinforcements for the enemies are delayed, or yours expedited, in fact you also see the armoured train return to service later in the Blitzkrieg campaign. Blitzkrieg however is the first of the campaigns to be built with the new specialisation system in place. Completing objectives, optional and standard, sees you rewarded with specialisation points. These are spent on unlocking perks and alterations that upgrade and strengthen your troops; there’s a nice variety in there, and some of them make major differences to the game in play. This new change is a great change, the previous system -which saw you choosing between two options- could easily leave you regretting your decision, especially if you would have rather taken either of those proposed after one mission over the two you are choosing between on a latter.  Most importantly, for me, a big change like this promises a brighter future for the game as the developers adapt and tweak their creation, and show a willingness to adapt and refine mechanics. 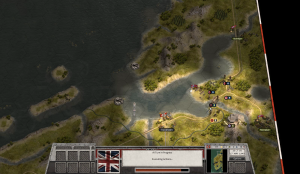 As this is, surely -at least until a Operation Overlord, or resistance campaign are added- going to be the first campaign that most new players will consider, it makes sense that the game touches on the mechanics that play more important roles in other campaigns. It does this really well in the earlier scenarios.

The invasion of Norway covers naval incursions and capture; although I played an unintended game with a single troop securing the North while my other core infantry forces moved up through Oslo after capturing the Southern coast. Players are encouraged to not deploy mechanised forces, and are initially supported with a naval bombardment and aerial reinforcements. The DLC’s Norway is vast, but an out-of-bounds, neutral section ensures that if a player launches their assault effectively from multiple fronts -unlike myself- they can quickly set up a frontline and spread out to quickly clear the map.

The capture of Warsaw challenges you to pay full attention to the strengths & weaknesses of the various troops as you engage in a tough siege (or surround) objective, while you use other troops to mop up the map. Your foothold in the West of the map are are undergoing a distracting counter-attack, as well as having to deal with a risk from a few fortified enemies to the North of the main target. It’s a challenge to split troops between an effective attack on the main target, or secure your footholds and supply-lines.

Of the earliest missions however, the foray through Belgium, in that now commonly known exploit against the Maginot line, is the mission that stands out the most for me. Your deployment extends almost the whole length of -as you might imagine- the Eastern side of the map, Luxembourg sits undefended in the bottom right of the map, Brussels to the top left, and the thick Ardennes Forest holds a firm grasp, splitting open ground into two channels. As such you have three lanes to watch over; top, leading to Brussels and pulling forces from the South; mid, an awkward ramble through the villages and capture points of the Forest; low, a tough sprint through the North of France.

Indeed, the Belgium map does a fantastic job of splitting your focus, and giving you a tough fight should you leave your troops spread thin. The reason I really enjoyed it however was because the vast amount of towns and villages of the area had amazing infrastructure; the first scenario in all of the campaigns I’ve played that have felt built to encourage you to properly use the train networks. It also marked one of the first time I’ve purchased additional air units with the soul purpose of scouting ahead -or, in this case, hunting down units. You see, the Ardennes pathways are narrow, mechanised forces cannot penetrate the woodlands effectively at all, and line of sight is crippled.

Once your troops are through the woods you’ve still got very capable Allied troop compositions defending the other targets to worry about. Thankfully, in the case of dealing with Brussels, the rail-networks stop at the doorstep of most of the mission objectives, which gives an amazing -and appropriate, I suppose, considering the DLCs titular tactic that you are employing- sense of momentum. 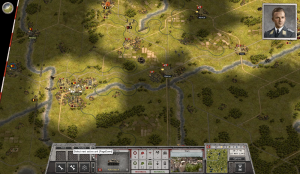 I was so impressed with the Belgium map that I realised I could easily play a whole campaign centred around guerrilla attacks from specialised troops hidden within dense forests. Indeed, the sooner we see workshop support; or some other Steam-enabled, easy way to share user maps I’m sure I’ll dedicate some time to seeking out more to challenge myself with.

All of this said, the DLC does suffer in some areas due to some quality-of-life issues that have become more obvious to me as my time with the game has gone on. For a start, the Belgium mission failed for me because of some of the invisible mission triggers in the game; in this case a mission objective that required me to “Drive through the Ardennes” did not fire even after I passed all of my troops through every area on the map – in fact I’d captured every town bar one I could not move troops into due to it being tied to that mission condition.

The other main one had been in the flagging of allied/allies’ targets in missions. Once again this is more prominent in an earlier mission; this time in Warsaw. While your main mission is to siege or surround Warsaw you are also expected to secure several positions and -if you are going to surround- loop around the other side of the city as to flank it. As you start you have a lot of friendly support in the Western section of the map, if aided they will cement a foothold and then start clearing a large section of the map. The issue I had is that I was attempting to aid them that I might get them to help the push on Modlin & Warsaw; however, while I could engage the troops, I couldn’t capture enemy positions, and I also couldn’t fight certain pillboxes. I completely understood why this was -to slow down the AI’s progression across the map- however, I had mentally distributed troops (and even doubled some back) in order to secure those positions and strengthen my supply route. It was just a tad frustrating.

(*Please note, the developer has contacted us about the above issue <capturing towns>, and has informed us that this issue was resolved with an update on launch for the release build, as there was an issue with some tile types.*) The easy cure for both of these issues would be clearer visuals, either red crossed out areas or new flags in the latter, or adding a string of markers in the case of the first.

Order of Battle’s GUI, and the way it handles information is something I have massively praised in previous reviews; so it is a little odd that these are the two main issues that I am putting forward. The way it handles supplies, morale, strength, and even off/def stats is simple and easy to understand; with a few quality of life improvements like the above, and maybe an addition of overlays showing where disembarking is available for units, or even indicators showing proximity and direction of nearest airfield, this game would be one step closer to accessible Wargaming perfection.

Whatever is next for Order of Battle: World War II, be it North Africa, Italy, Overlord, or something unexpected, it’s going to have to hit pretty hard in order to best this DLC, which features an amazingly strong selection of scenarios.